Being an older gamer, with kids, I guess I’ve had a fair amount of exposure and adult experience with Nintendo’s Pokémon franchise. My house always had the cards, movies, cartoons, and video games. My now adult children grew up with the franchise and I love the Pokémon games. I have played several of them, and still do, as do my two oldest children and their children.

So, it’s no surprise that I was intrigued upon hearing about a project on Kickstarter by a company called Crema Games who was toting “a massively multiplayer creature-collection adventure inspired by Pokémon”. So back in June of 2018 I did my due diligence and submitted a pledge. The game, Temtem is currently in early access on Steam PC where the game is nearly fully fleshed out. Join this self-proclaimed Pokémon master as I take my first steps onto the Archipelago islands in what promises to be an ongoing series of articles on Temtem!

A “Switch” To My Original Plans

Couple that “wait” with the fact that the Steam Deck was announced and then suddenly I seemed to have less reason to wait. So, Crema Games happily converted my Nintendo Switch key to a Steam PC key which allowed me to jump in now. Hopefully it’ll be Steam Deck certified in the future negating my reasons for a Nintendo Switch version. With that in mind I decided to partake in an ongoing adventure into Temtem which had all the ear markings of being Pokémon on the PC. 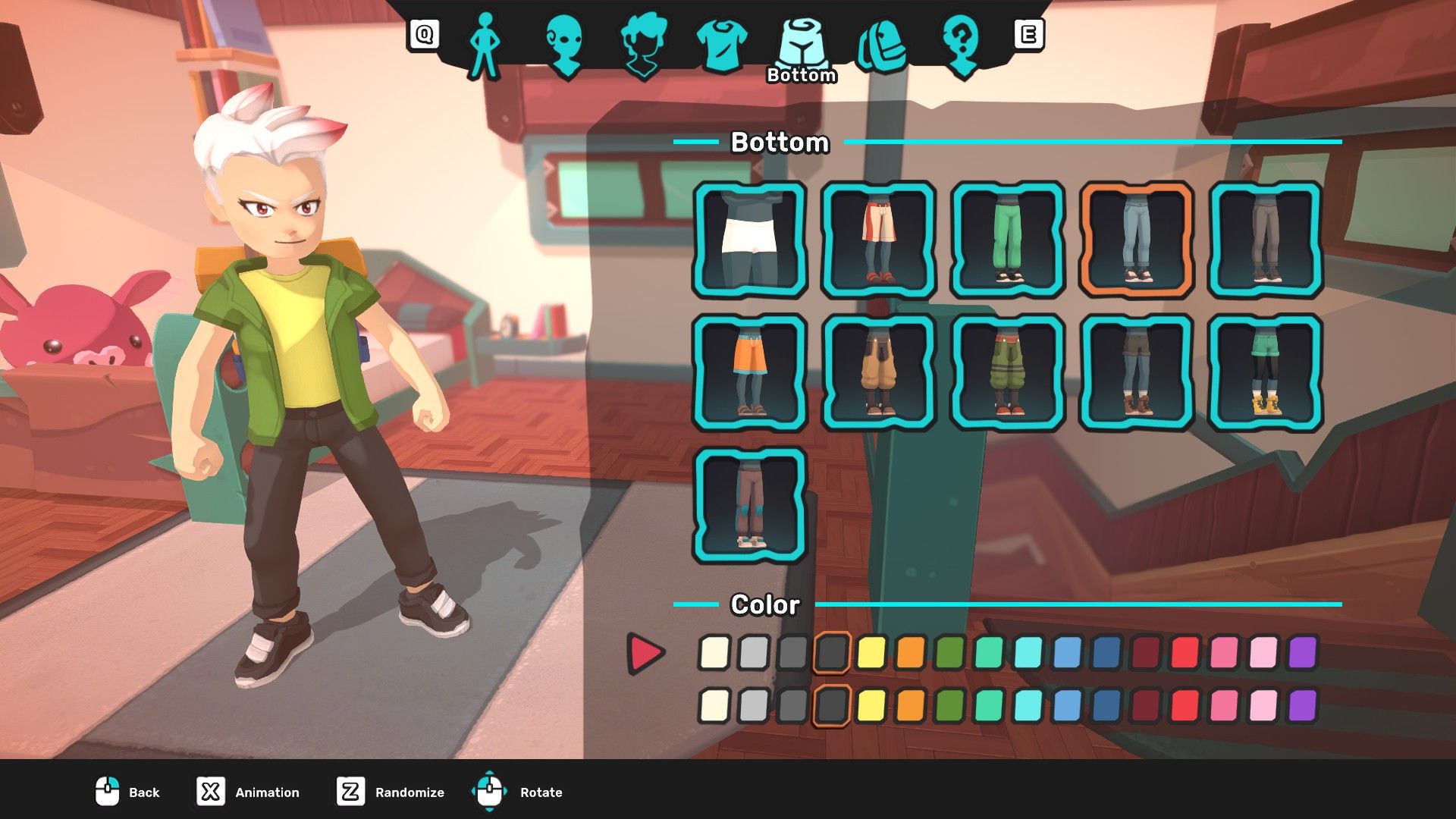 A basic, yet fulfilling, character creator

My fascination with Pokémon games has always been with the creature lore and creature creativity as well as with “catching” them all versus battling. I went into Temtem hoping for that experience but with other players.

The first thing that will catch your eye is the art style. The game uses cel-shading. It's a form of art style that is 3D but with cartoony textures. It’s the look reminiscent of big selling Nintendo games Breath Of The Wild and, ironically the latest Pokémon Legends game, Arceus. And I’m fine with that personally.

Starting anew I began with the character creator, obviously, as we need to have our own Temtem tamer appearance. The character creator was basic but still fulfilling. Like its inspirational material you decide on sex, hair, shirt, pants, shoes, etc. Crema Games states that you’ll be able to customize your character further as you play with various cosmetics, etc.

After character creation you begin the main story quest which in short verse is your journey across six islands to become a Temtem tamer while fighting against the evil Clan Belsoto, anyone remember Team Rocket?

Pack Your Bags and Away You Go

Your quest begins in your house where you are out the door with your backpack and off to school to become a trainer. You’re equipped with a “Tempedia”, akin to a Pokédex, and venture out to meet up with and train with Professor Konstantinos. All with the loving support of your mother. I always wondered where are the players’ dads are in all the creature collecting games? 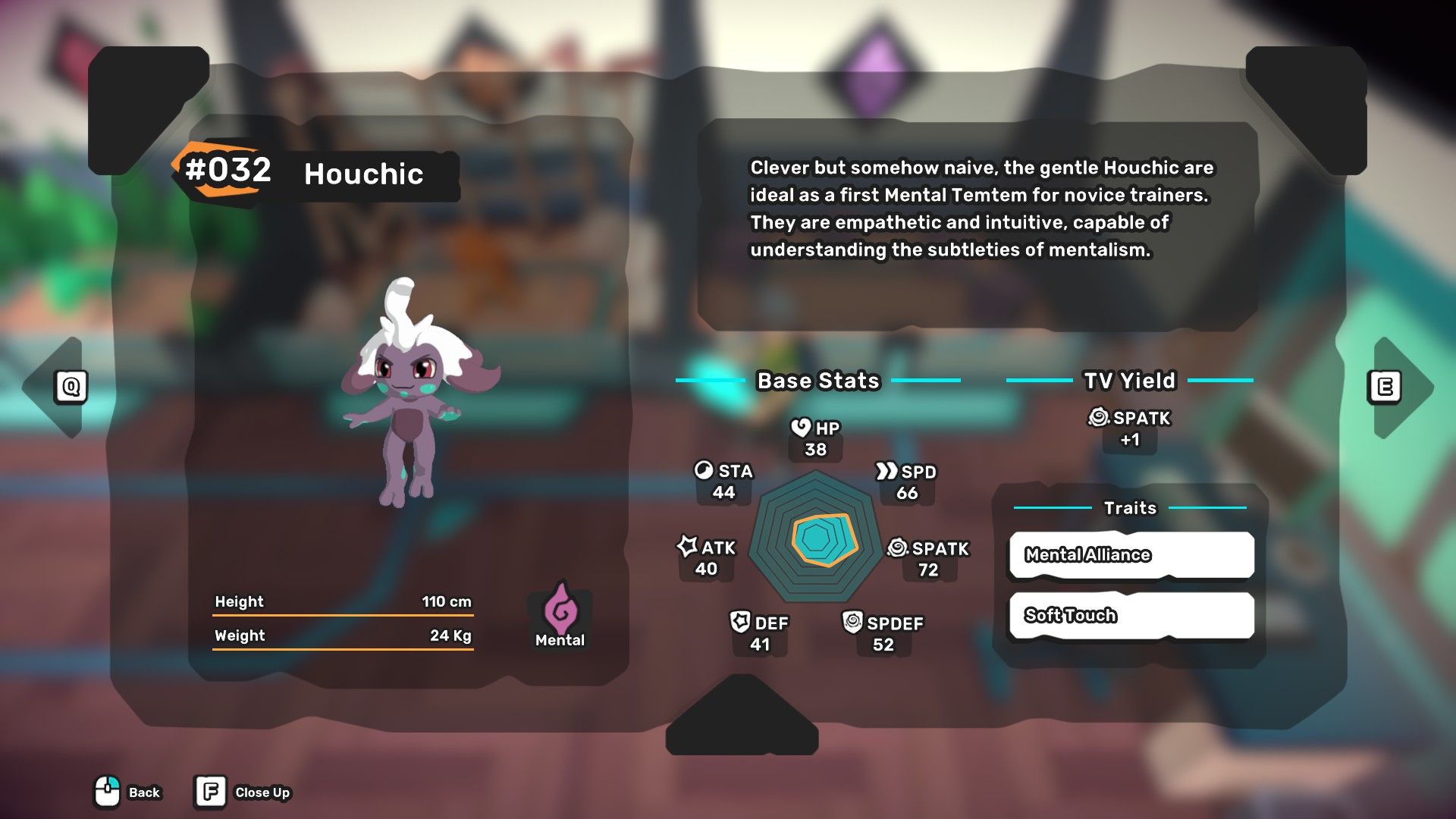 Basic training with the Professor

You get a Temtem introduction from the Professor and you pick your starting Temtem. You can choose between a Melee, Crystal, or Mental type. I went with the mental choice purely on the fact that Houchic, one of several mental Temtem, looked cool to me like a seemingly mischievous pixie or Dreamworks Troll if you will.

The game guides you along a main story quest path with several optional side quests along the way. In the early stages of the game, it’s quite repetitive, but this was not unexpected if you’ve played early Pokémon games. You’ll be running the typical random encounter treadmill. As you try to open the map, you’ll cross the paths, sometimes frustratingly, of many trainers which force you into a Temtem battle. This is how you earn pansuns which is Temtem’s currency. You’ll also run through tall grassy areas where your random wild Temtem encounters will occur. This is where you’ll catch wild Temtem with “TemCards”, Temtem’s version of Pokéballs.

You can have an active team of six Temtem to use in battles. You designate your starting two Temtem. With a battle team of six you’re also always playing that “rotating out” game to make sure your Temtem are evenly leveled. One thing I don’t like is that you can’t pick your starting two Temtem when a battle begins. This means to switch during battle you’re effectively forfeiting a turn at using a technique. 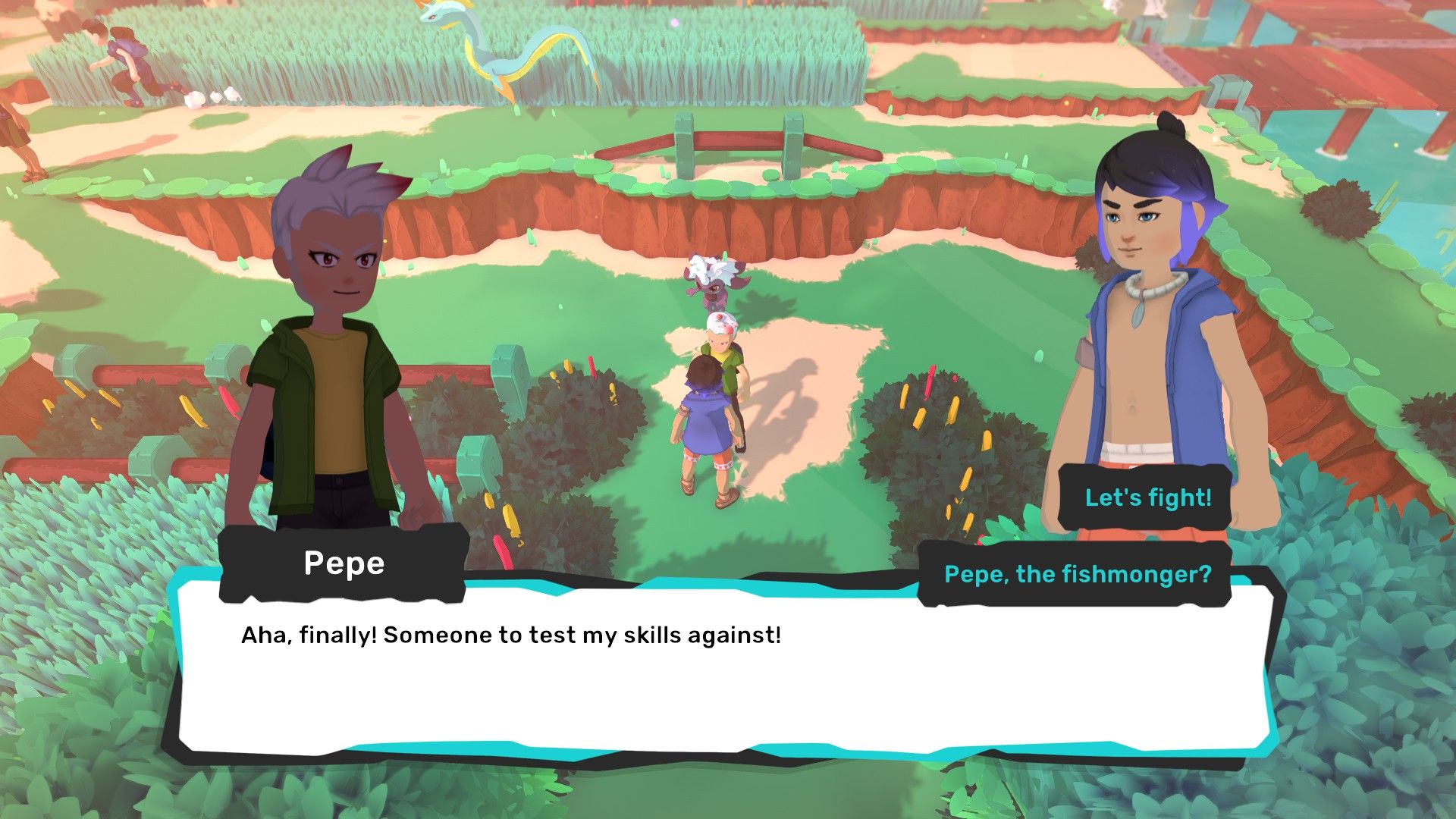 A Temtem trainer encounter, one of many

Each Temtem, currently about 164, will be able to pick four active techniques. As Temtem level up they gain abilities which can be switched in. I’ve not gotten far enough to see a Temtem “evolve” so I look forward to that.

Using a Temtem’s techniques uses up stamina which you must manage, or you will overexert your Temtem which means they skip a turn. If you lose the health of all six of your Temtem in a battle you’re effectively defeated, and you respawn at the nearest Temporium which are locations throughout the game where you can heal and store Temtem free of charge.

The game is designed so that Temtem’s have types with the expected Rock-Paper-Scissors strengths and weaknesses against other types. So, it’s a whole new religion to learn and memorize. 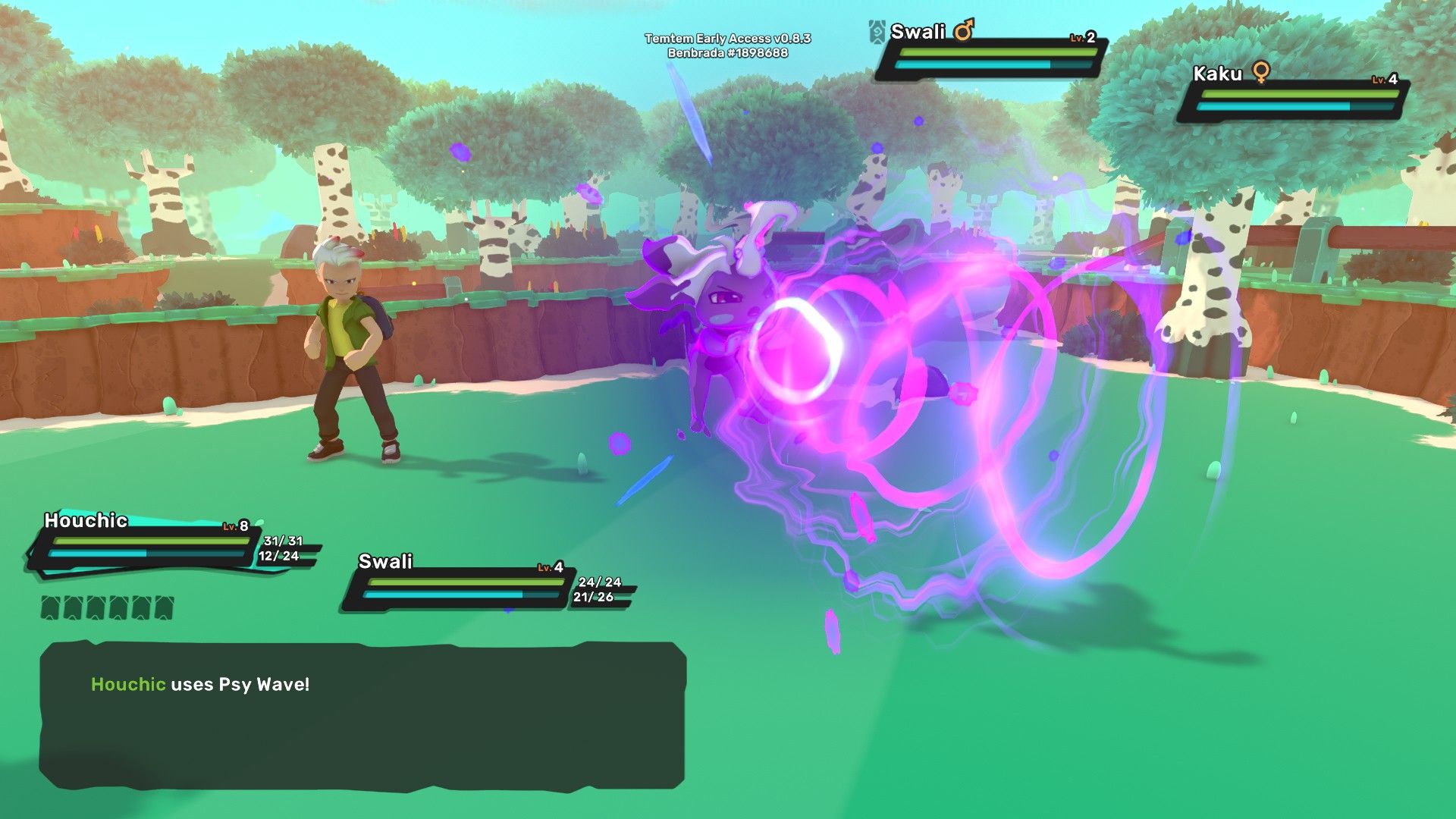 Some nice cel-shading effects during battles!

In the early stages, what we’ve encountered so far all seems relatively familiar even down to the adolescent dialogue. Any seasoned Pokémon player should feel right at home in the early stages. Crema Games has not tried to hide where their inspiration came from and I’m okay with that. It’s nice to see other players running around so the game does have that MMO alive feel to it.

The game offers many features which we hope to explore on our journey including online co-op play and competitive (PvP) matches and tournaments. There’s also trading and of course eight Dojo masters to beat. There’s also a housing feature we’d like to explore. I’m also not quite ready to say how family friendly this game is just yet. I do hope to explore all these areas in forthcoming articles, hopefully you’ll join us for the journey!