Update 28, The Deadlock Protocol, brought a large amount of changes to Waframe. It is amazing how many changes were made while the whole development team was scattered to the wind working from home because of the pandemic. While the update was filled numerous changes and additions to the game, there were some changes that were not as great as I hoped. As far as major updates go, this one could have been better if a life-threatening virus wasn’t going around. One of the major additions to the game was The Deadlock Protocol quest line.

*Minor Quest Spoilers! Skip this paragraph if you do not want spoilers*

The Deadlock Protocol quest was the first quest since The Chains of Harrow to introduce a totally new warframe (The Sacrifice and Excalibur Umbra does not count). Comparing Deadlock Protocol quest to Chains of Harrow or The Sacrifice, I would say the quest was a bit of a let down and felt extremely short. Now, if I compared it to The Glass Gambit (Gara warframe quest), I would say it was about equal to the quest line. The quest itself was very short and ended with a fight that did not have any great moments to it. I spent most of my time waiting for the right moment to strike Protea to stop her from rewinding time. The rest of the quest leading up to the final fight with Protea had amazing voice acting and the story was great, but it all seemed to be a tutorial for the new game mode and the Corpus ship rework. Overall, it wasn’t a bad quest line, just a forgettable one.

Right now, Protea needs a buff to get on par with most of the warfames in the game. Her abilities tend to have a steep fall-off the higher the level the enemies are. Even though she is a ton of fun to play, she is not a warframe I would take into a higher level mission. The best part about Protea is her passive ability and her first ability.

Like I said, Protea is super fun to play, but she needs a buff to make her viable at higher levels. I can’t wait for the buff. Buff her now please! 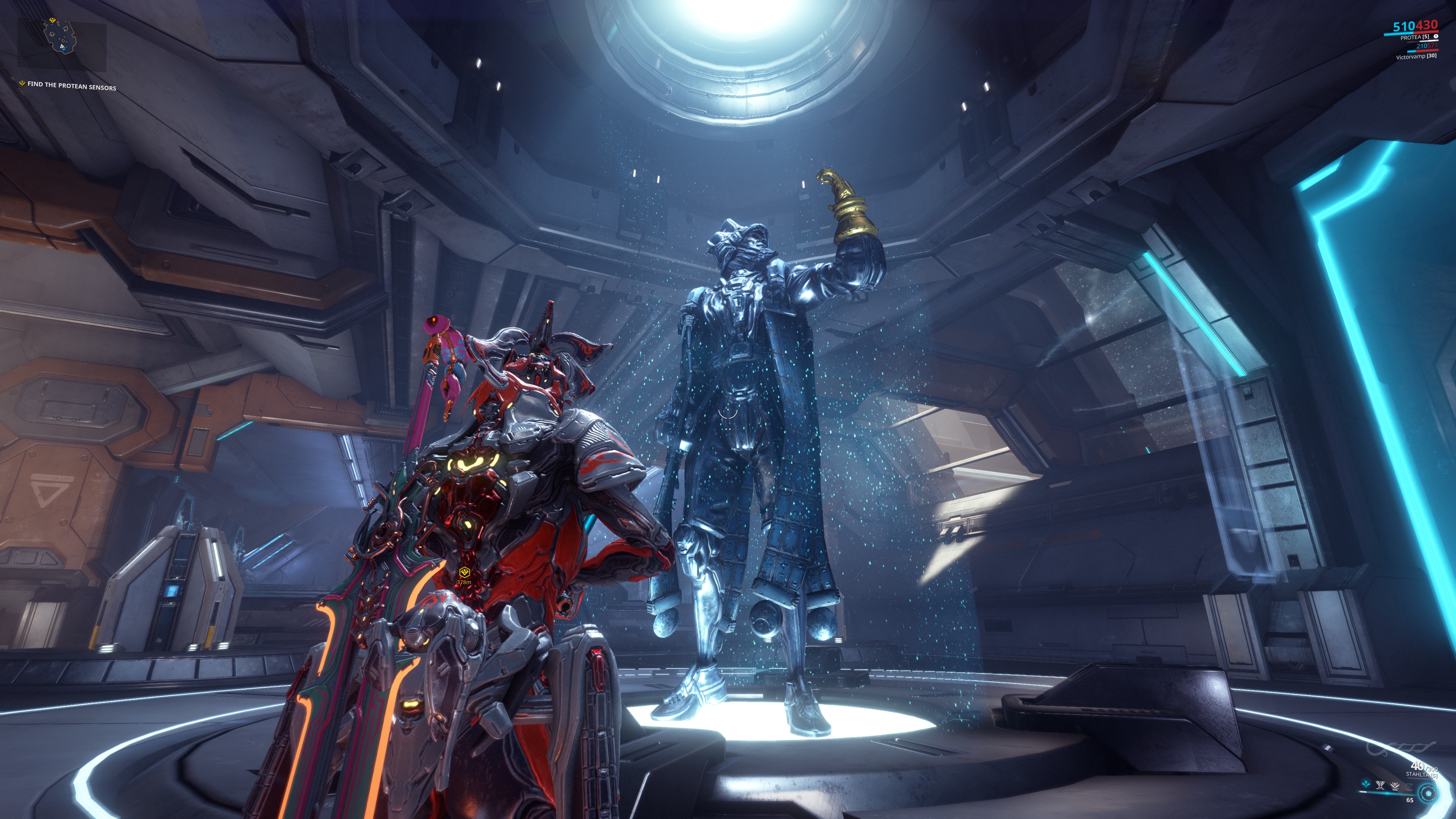 While the quest to get Protea might have been forgettable, the Corpus remaster and the new game mode set in the Granum Void are defiantly welcome additions to the game. I spent hours in the new Corpus tile set just marveling at the architecture and enjoying slaughtering the enemies for fun. I spent less time in the Granum Void because you need a Granum Coin that drops from specific enemies. The coins are not hard to get, but stopping a mission to jump into a void can piss your squad mates off if they are not expecting it. The Granum Void is not only beautiful to look at, the rewards in the void are worth the trip. Just make sure you don’t hold up your squad and they know you are jumping in. If you don’t communicate you could end up in the void alone while the rest of your squad is waiting on you to get back so they can fight the Jackal. 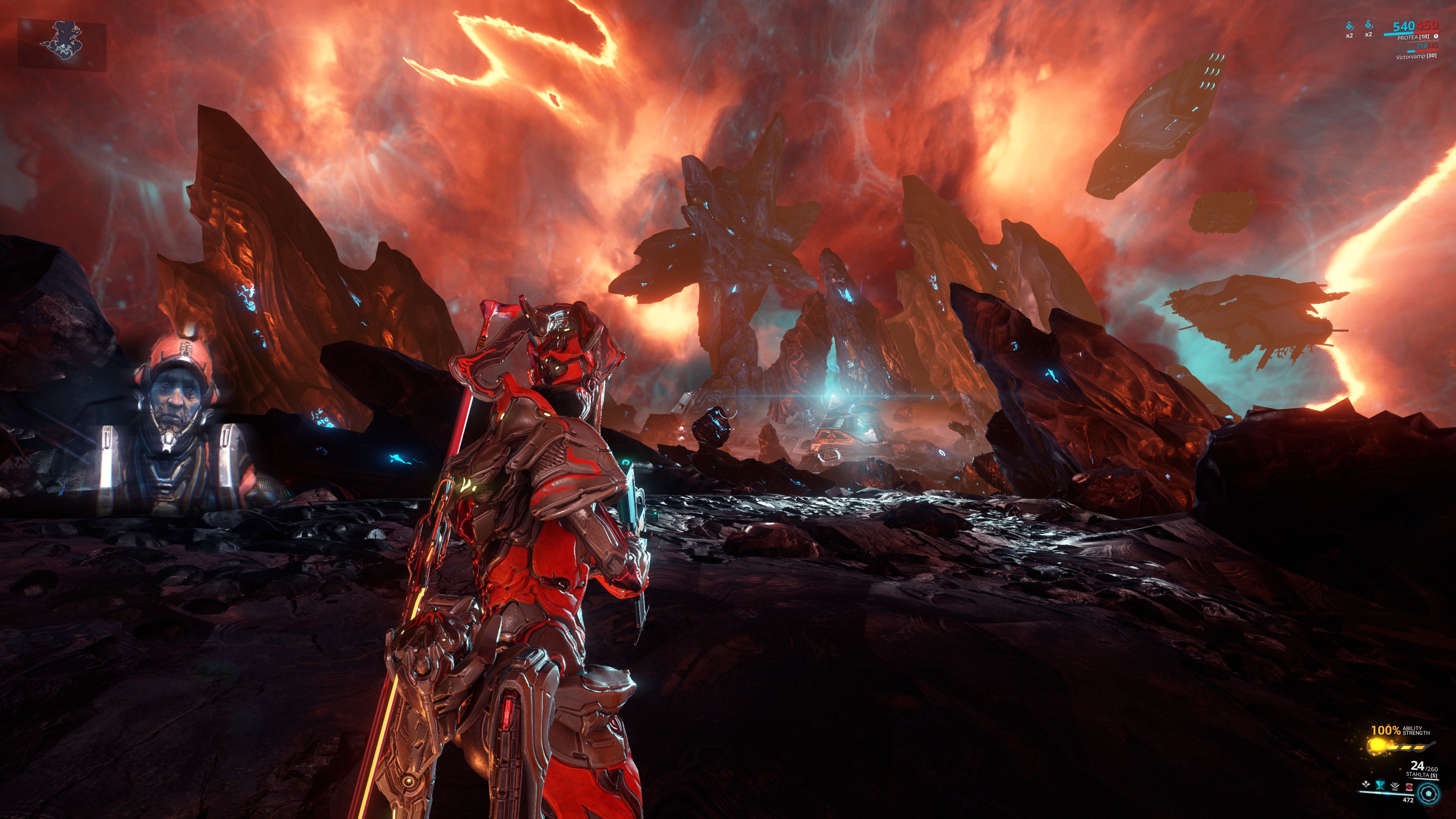 In the last couple DevStreams leading up to Update 28, the developers hyped up the new Jackal fight rework. While the fight is fun and better than it was before, I do not find it interesting enough to do it more than the one time. It is a great fight for new players, but veteran’s like myself have no incentive to visit the fight more than just to see what all the hype was about. Now, when the new hard modes are implemented and fights like the Jackal get better rewards, I could see myself having fun with the new Jackal fight. Until then, I’ll keep farming for Ivara Prime.

The world has been through a lot this year, but we can count on games like Warframe to give us some relief from everything. Update 28, The Deadlock Protocol, might not be a Chains of Harrow or The Sacrifice, but it is a great addition to the game. Protea is not the best warframe right now, but I can see her being very powerful with some major tweaks. The Corpus rework and the new Granum Void game mode are the shining stars for this update. One of the major thing I noticed in the update was the optimization of these game modes. With all the particle effects blasting off and the enemies flying by, I was running at an average of 120fps. For a 6-year-old game, it is not showing any slowing down. I can’t wait to see it on my new PlayStation 5.