Hey Commanders, Erek Sprax here.  Sometimes I hate being right.  While the media tries to call it a solar flare, I just know that thing is a Thargoid Star.  The invasion has begun.  Galnet News is saying that Vox Galactica is reporting a coordinated attack on 3 different inhabited systems.  The report says 42 n Persei, Chun Pindit and Tekkeitjal, none of which belong to a superpower with naval support, were all attacked. There are 7 million people living there and I don’t mean a few ships went in and caused some problems for local pilots!  The report calls it “swarms of Thargoid vessels.”

Again, I hate that I’m right.

The good news is that it appears we can run. There are places in the galaxy that are more habitable than where much of civilization is already living. As I promised, I’ve been taking some pictures while I head to Beagle Point.  One of the coolest things that I’ve come across so far was an Earth-like world.  If I didn’t know better, I would have sworn that it was Earth.  I’ve been trying to track down the distance from Sol since I started writing this but I cannot find BYEIA EUQ WF-N C20-29 in any of my reference data which leads me to believe that I was the first person there.  Eventually, it’ll get updated I suppose.  For reference, I am getting close to the top of the Inner Orion Spur. 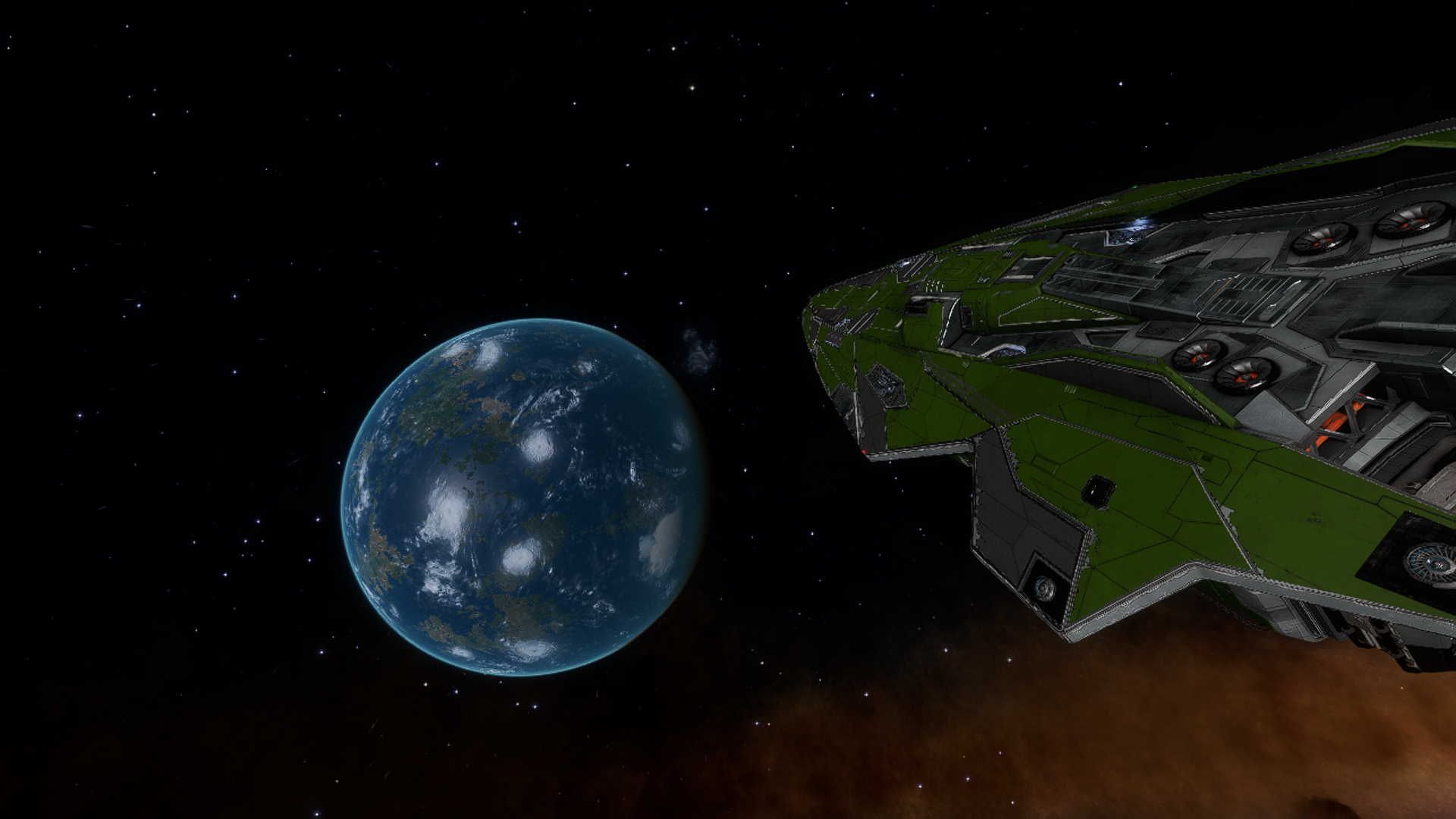 I know we don’t need Earth-like worlds to live but growing up on one made the artificial environments that are common in most inhabited systems feel wrong.  I wish that I could land on one just to spend a week or two enjoying a real atmosphere but of course, my Anaconda would never fly again if I tried to land it somewhere with that much gravity.  I can only land on planets with little to no atmosphere.  So I tried that out.  I landed on a planet with a shallow atmosphere just to get out and stretch my legs.  It was the middle of the day but I was so far from the star that it felt cold and looked like evening.  Still, it was nice to walk around for a bit somewhere other than the ship’s cabin. 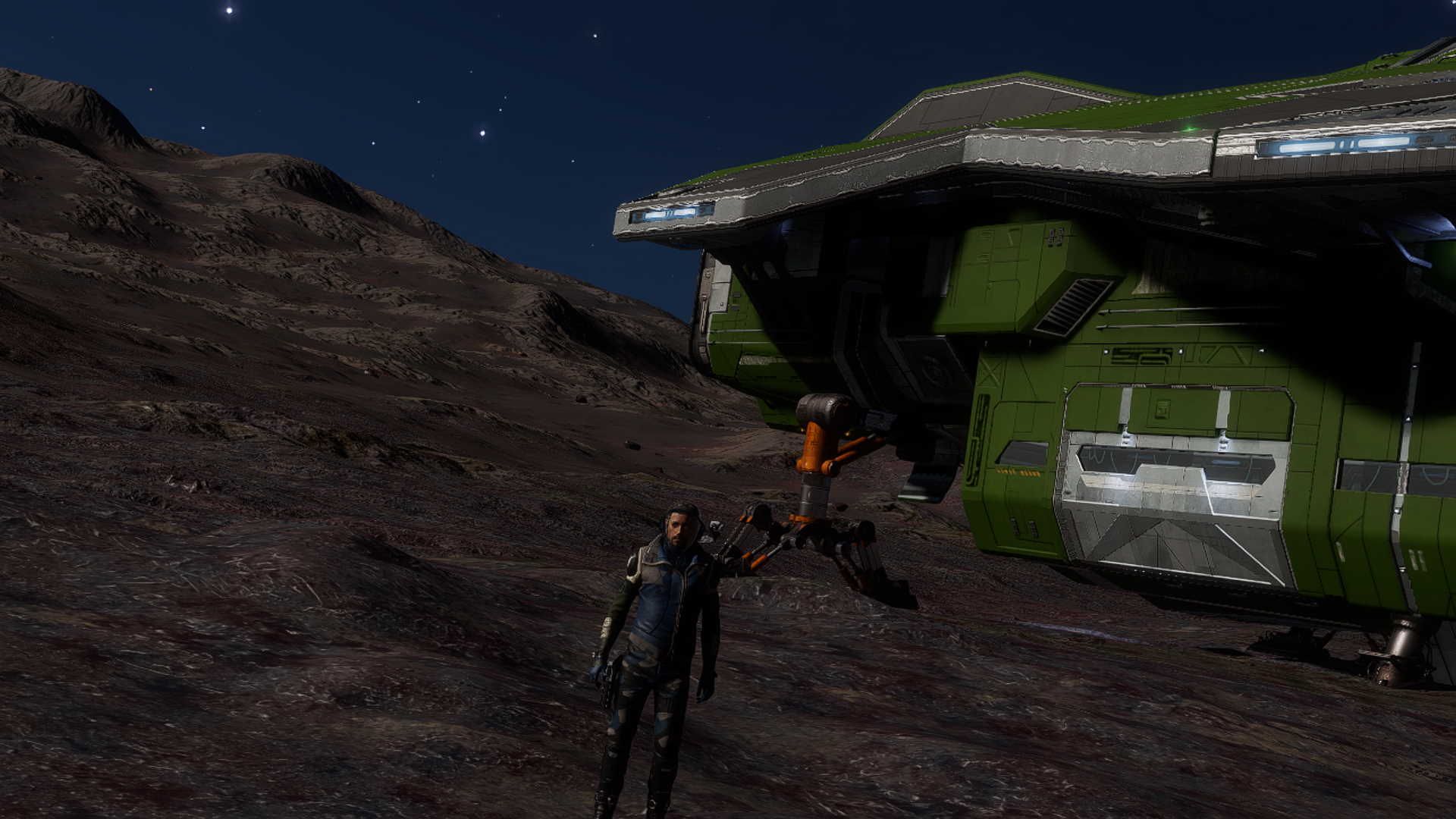 I also went and saw a nebula.  It didn’t have an official name but rather just the designation, NGC 6357. This nebula, sometimes and less officially called The Lobster Nebula, is a diffuse nebula which just means that it’s spread out and doesn’t have clean and clear boundaries.  I first noticed it as a small bubble in my cockpit view while I was still hundreds of lightyears away.  When I looked at it on the galaxy map, it was in the direction I was headed so I changed course thinking that I would get some great photos from inside.  I wasn’t entirely sure that it was safe to travel into a nebula but I figured if anything went wrong I could jump out and then deploy my AMFUs to repair the ship.  If necessary, I could even look to see if there were any fleet carriers nearby to repair at. Logic dictates that I’m not the only one out here exploring.

There were no problems with going into the nebula but there was an issue with getting good pictures.  Though the inside of a nebula is mostly just dark gasses, these gasses didn’t really show up in pictures.  It just looked dark inside the nebula.  Taking a picture wouldn’t have even shown the ship that well as a result.  Fortunately, I took a picture from outside the nebula as I was getting closer to it that shows it fairly well. 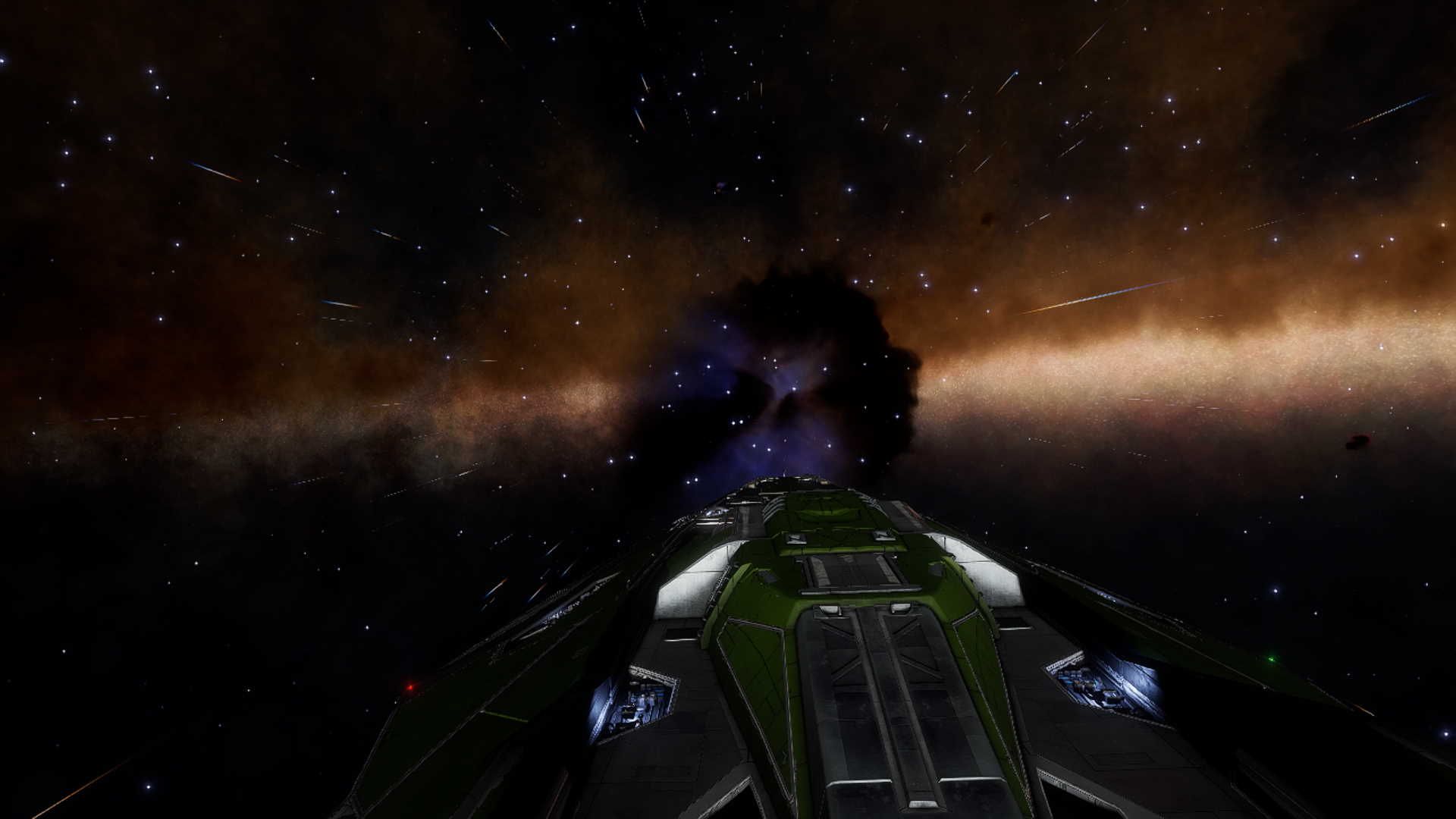 This picture was taken approximately 100 light years away from where I entered.  For it to appear so big at that point, the nebula would have to be massive and indeed it is.  From what I can tell, NGC 6357 is about 110 lightyears from where I entered to the opposite end and has about 800 stars inside of it.  While the appearance inside isn’t really that impressive, it is quite stunning to look at from outside the nebula. In fact, I may stop at another one while I’m traveling just because they’re so much fun to look at.

I’ve still got about 57,000 lightyears left before I get to Beagle Point.  Currently, I’m about 8,000 lightyears away from Sol.  My plan is to stop along the way and see Sagittarius A.  I went to a black hole at The Collection of Wonders but I’ve heard it doesn’t compare to the big one at the center of the galaxy.  I’ll check in again soon so everyone knows I’m still ok.  Until then, Erek Sprax out.