Bethesda surprised everyone this week with a Twitch stream featuring nothing but the Fallout Vault Boy, naturally leading gamers to speculate on what was likely to be a new Fallout game announcement. But what could it be? The possibilities ran across the board, from a brand new Fallout RPG to the meme-worthy suggestions that Bethesda was going to announce Skyrim playable on your Pip-Boy in Fallout 4.

Well, with the drop of a new teaser trailer, we now know what the new Fallout project is and it’s a title called Fallout 76. That’s pretty much all we know at this point, but Kotaku’s Jason Schreier says he hears it’s an online game of some sort.  Jason’s a pretty reliable guy, so let’s roll with that for now and consider some of the possibilities.

I joked about this being a Battle Royale game in the MMORPG.com Slack yesterday, but seriously, it works. I sure hope this isn’t what Fallout 76 ends up being, but if you really think about it, it makes perfect sense with how BR games tend to work these days. Fallout already has highly radioactive zones, so you could easily have a situation where players are being pushed towards the center of a map. Scavenging is a big deal in Fallout games, so searching around for weapons and/or technology in a match works, too. Imagine finding some Power Armor on the field and suddenly you’re one of the most powerful players on the map. Fallout’s variety in technology, in both weaponry and gadgets, would lend itself well to a BR game, as well. Personally, I’m no fan of Battle Royale, but the cynic in me wouldn’t be surprised if that’s what Fallout 76 ends up being. 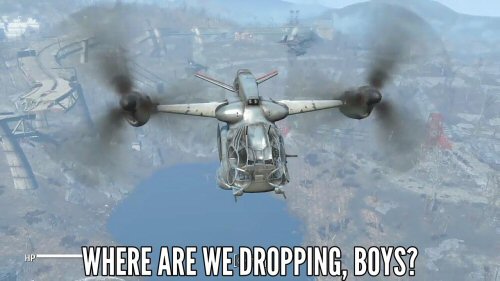 Sure, no one really makes AAA MMOs anymore, but Bethesda is one of the few huge studios still actively pushing the genre. Why not take the same approach to Fallout as ZOS did with ESO? From what we can tell, ESO is doing quite well. ZOS managed to have its cake and it eat too by utilizing pretty much every MMO business model at once in a single game. ESO is buy-to-play, makes use of a cash shop for direct sale items, has loot boxes, and offers an optional subscription. With games-as-a service being all the rage these days, it’s no wonder why we haven’t seen an ES6 at this point. Why bother when you can just roll out new standalone expansions and build upon ESO? The blueprint is already there with ESO and I could very easily see it applied to Fallout.

Games like Destiny and Tom Clancy’s The Division are what I consider to be the modern MMO (for better or worse). These MMO-lite style games are a great fit for something like Fallout (and the games-as-a-service model), though I suspect we’d see more of a focus on overworld content than in some of the other games out there if this is the case. I’m not too sold on repeatedly running static dungeons in a Fallout game, but if I think about Fallout 76 along the lines of The Division’s West Side Pier zone, where the world is much more alive with random events and NPCs that come after you instead of just sitting around, it makes a lot more sense.

The date on the Pip-Boy in the trailer is October 27, 2102, which would place Fallout 76 as being set in the earliest period of all of the Fallout games.  In the lore, the bombs dropped in 2077, so we’re only 25 years out. For comparison, Fallout 1 is set in 2167, almost 100 years later. The trailer also features a shot of something called “Reclamation Day”. This has me thinking that we could see building/claiming territory as one of the first humans returning to the outside world being a strong theme here.

With that in mind, something along the lines of Conan Exiles makes a lot of sense. Conan Exiles is a bit meatier than your typical survival game, featuring a world full of bosses, dungeons, loot to find, lore, etc. It’s kind of a scaled down Age of Conan in a way and this could also work really well for something like Fallout, with players building settlements (like in FO4, only multiplayer!) and the like and having PvP be a central focus.

As of this writing, this also appears to be the most likely option.

Either way, with E3 being so close, we’re likely to find out more soon.

Assuming Fallout 76 is an online title, what do you hope or expect it to be? Share your thoughts with us in the comments below!