I’m a big fan of board games, and I’ve come to learn that there are a number of my readers that are into boardgames, as well.  I’ve been looking for an excuse to take a look at more of the digital conversions that are available, and recently had a chance to do just that.

I have two nieces in a neighboring State who had expressed interest in something like a game night.  I thought it a great opportunity to try out one of the several digital boardgames that I see occasionally on Steam, so I picked up Scythe and send each of the girls their own copies of the game.

Some of the questions I thought I might focus on today are what I liked about the digital version of Scythe and what I didn’t like about this version of the game.  I also want to point out a few missed opportunities and discuss whether I’d recommend the game to readers.

I like Scythe and think it’s a great game.  I have the tabletop version and break it out occasionally when we have company that enjoys that sort of thing.  The game in many ways is one of the simpler and more streamlined resource management games, and I’ve found that it makes a good introduction to the euro-style games that I personally prefer.

When I’ve got someone relatively new to board-gaming and they’re not sure what sorts of games they’ll like, Scythe is one of those games that can help to determine whether someone’s going to like the more robust and complex resource management games in my collection. 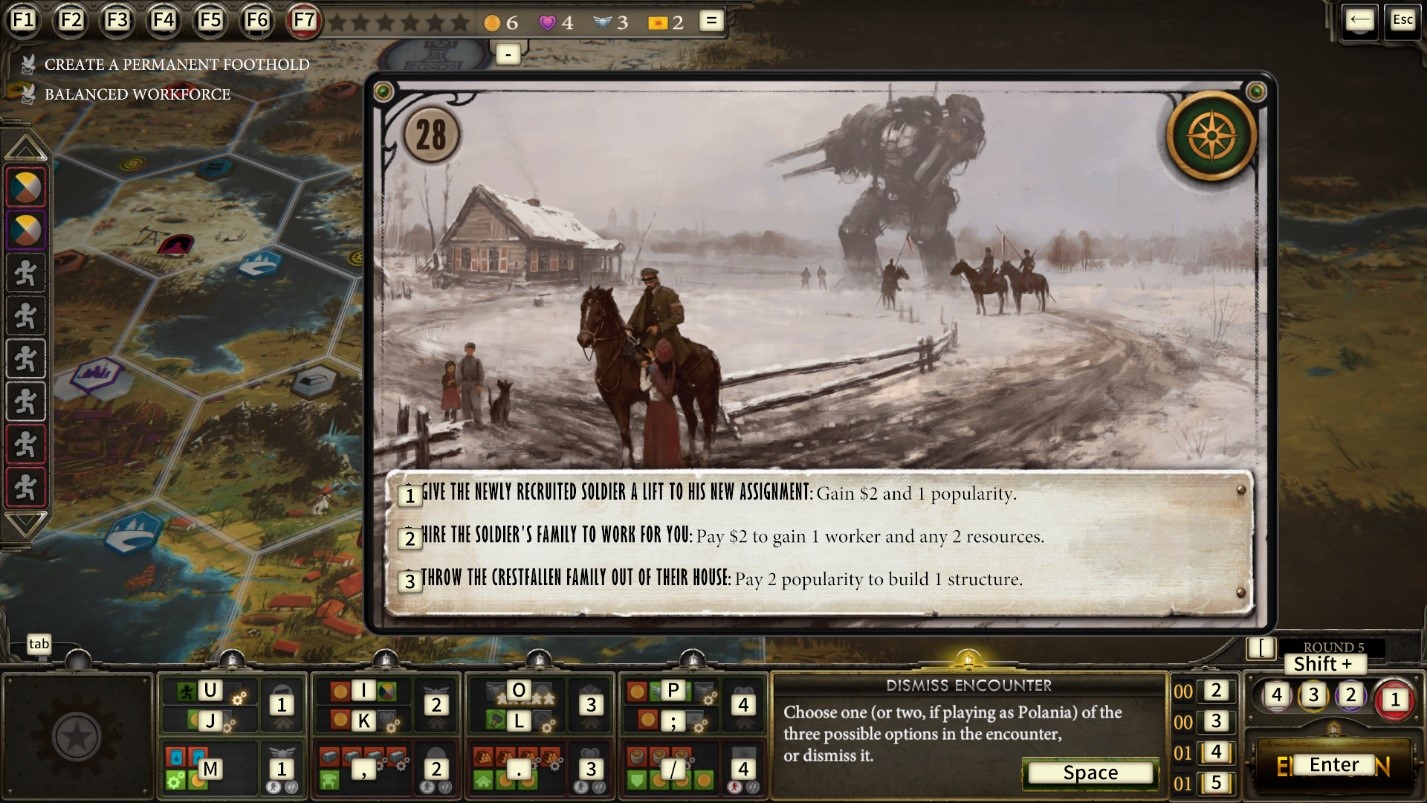 Scythe is a great boardgame with a cool theme and great art, but the digital conversion relies too heavily on the source art to make up for lack of developmental effort.

I’m also a fan of the artwork and setting of the game, which combines a sort of post-apocalyptic setting with a steampunk vibe.  It’s a cool theme that’s backed with really nice art, and additionally supported with the plastic models unique to each faction in the physical copy of the game.

I like that Scythe plays quickly and supports up to five players.  Both have been advantages in the past.  First, just that it’s an entertaining game that plays in an hour or two, making it easy to fit into a game night.  Secondly, I like that up to five players can play, because it’s common to have an odd number of potential players and I like having a few good games in the catalog that can seat odd numbers of players.

My problem with the digital version of the game developed by the Knights of Unity is all the missed opportunities.  They did enforce some of the game rules programmatically and I think that helps new players getting into the game, but there are a whole lot of basic quality of life enhancements that should have been trivial to implement and weren’t.

For instance, there are tool tips in the game, but they’re not particularly helpful other than to identify in one or two-word phrases what aspect of the game board has been highlighted.  I would have liked to see more of the game’s rules indicated while highlighting sections of the playing surface, and with context. 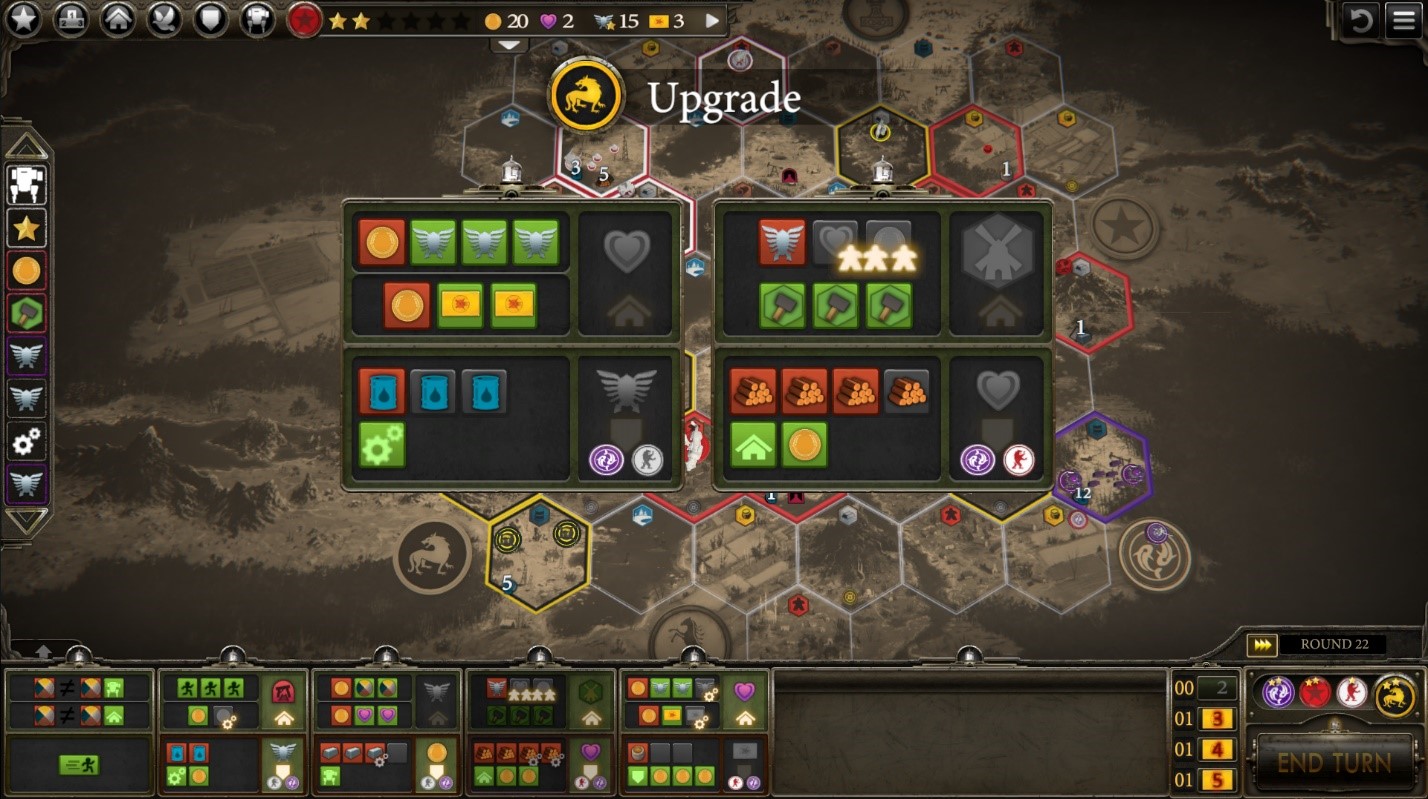 Cryptic screens make it a little harder to understand what AI players are doing than it should.

A confusing part of Scythe for some new players is that you can chose any action tile other than the tile selected in the last round (or at least you’re supposed to, and that’s something the digital version of the game doesn’t correctly enforce) and the player takes the action on top of the tile and then the bottom of the tile.  In the digital version of the game, this is made more confusing because the top action on most tiles has an “or” component to it, allowing the player to move some number of units or collect some number of coins, for instance.

The developers made actions more confusing by making specific actions selectable, rather than the entire tile.  I found that with new players who’d never played Scythe before, this created a lot of confusion around how actions worked because some tiles had three actions, some just two, and it was hard to understand what the relationship between actions were.

There are also mechanics in the game, such as recruitment, which produce coins, popularity, power, or combat cards when you take an action or the player to your “right” takes an action.  The UI doesn’t do a very good job of hinting to the player how that works.

I was also frustrated by basic functions that seem to be missing.  As an example, the Escape key doesn’t work to skip cut-scenes and you also can’t access the menu doing AI turns, which is a little frustrating when you’re trying to adjust game settings between your own turns or just want to skip an animation that you just don’t care about.  Even worse, it doesn’t let you back out of a wrong move.  Several times, I started to take an action, only to realize I didn’t have the resources to take that action or couldn’t figure out what to select in the UI to finish the action and would have liked to just back out and pick something else or try again.  In the board game, there’s a long grey area between marking your action tile and actually taking the action, but that’s just a simple and permanent click in the video game.

Probably my largest gripe about the game is just that it feels very phoned in.  The art on the physical copy is fantastic and the game design from the rules, to the board, and even the player mats all combine for a high-quality product that clearly involved a lot of thought and effort from the designers.   The digital version of Scythe, not so much. 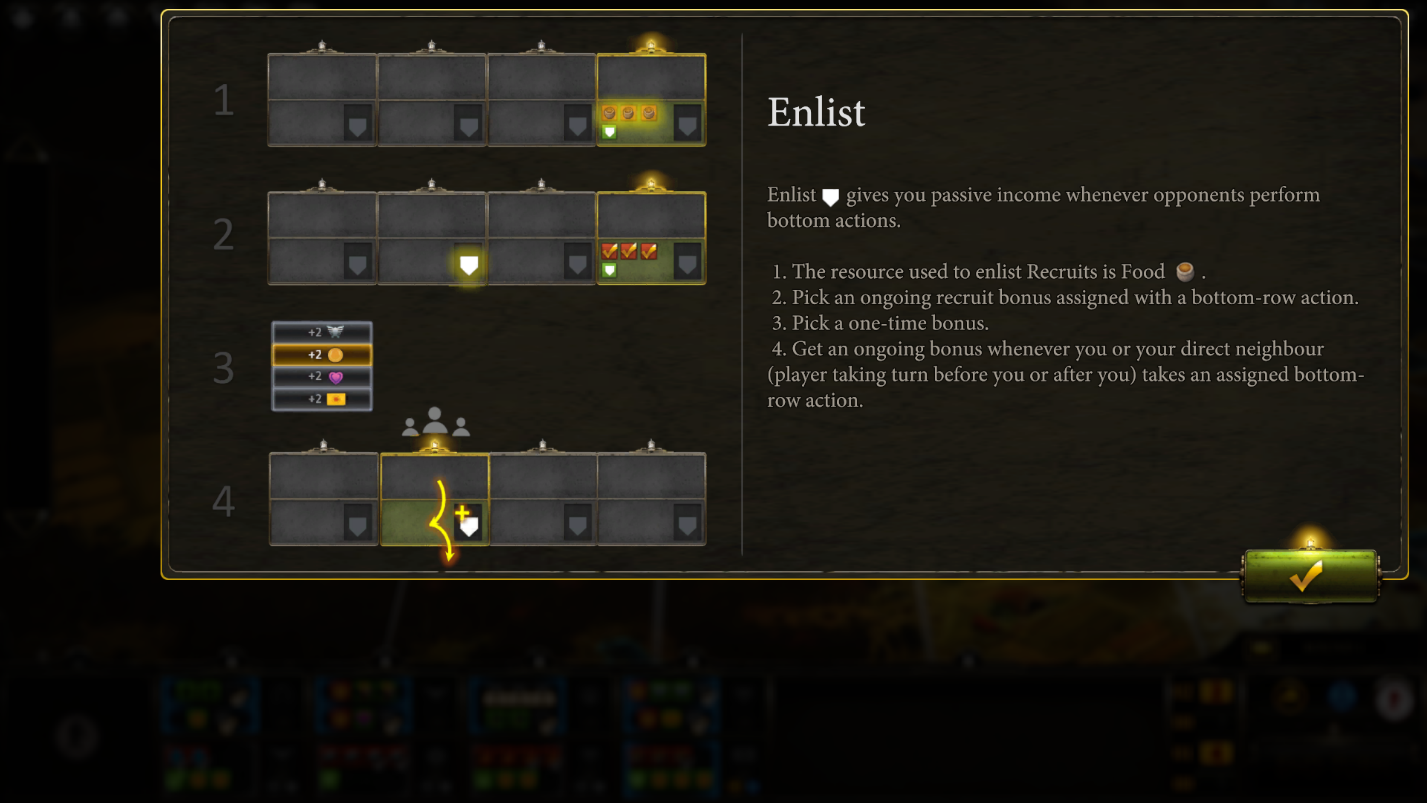 The tutorial covers most of the game’s mechanics and already captures important information in text form, it should have been trivial to link those text blocks to tooltips.

The art that’s fantastic in the physical version of the game feels lazy in the digital version with zero enhancements to speak of.  Even the resolution is substandard and I couldn’t seem to zoom out with the mouse wheel to view the entire map, which made me feel like I was forced to hunch inches over the table while playing.  I lost a lot of the situational awareness I’d normally have while playing the game on my own table.  With all the extra contextual information I should be getting from the game, there’s no excuse to leave the player feeling information-deprived.

Even the score for the game left me feeling frustrated.  While there were tracks that felt like they fit the mood of the game fairly well, there were other tracks, like “Olga & Changa” that just felt so odd that I finally just turned the in-game music off.  I’m not opposed to midi at all, but sometimes the samples are just too low quality to sound remotely professional and don’t really fit with the atmosphere.  In those cases, if a live orchestra isn’t in the budget, I feel like a competent sound designer should at least be able to source modest quality samples and use appropriate filters to make up some of the difference.

I normally do my best to stay clear of negativity when I write, but this game was such an unexpected disappointment that I felt compelled to say something.  It seems to be better than it is because it’s propped up by the exceptional work put into the original physical version of the product.

The art and game design that makes the original game great is still there, but poor development choices actually detract from the excellent base material and deliver a game that’s…  Well, “lazy” is the word that keeps coming to mind.

There were so many opportunities to enhance the experience of Scythe and the developers chose to avail themselves of none of them.  I’d definitely recommend picking up a physical copy of Scythe but stay well clear of the digital half-measure found on Steam.

If you’ve already purchased the game, your experience can be slightly enhanced by a better soundtrack curated by Boardgame Ambient Soundtracks on YouTube, which I would actually recommend.  The list of credits includes a number of video games, however you’ll note that Scythe itself will not be found among them.