RimWorld is an awesome game.  I’m not even one of those guys that dips too far into mods, and I love the game.  In fact, I don’t think I’d ever played the game with a mod installed until a few months ago.  The base game is just so perfectly right up my alley that I’ve never really felt a desire to add any modifications.

I work a lot and RimWorld offers me that perfect combination of strategy, RPG, pace of gameplay, and ability to pause for indefinite periods of time with no problem.  I’ve telecommuted to more than one board meeting thanks to RimWorld, and I don’t see that changing anytime soon.

One of the greatest things about RimWorld is, strangely enough, the graphics.  They’re simple and age incredibly well.  It was such a fantastic design choice that’s still paying off for the game.  They also made the game very easy to mod, which has extended RimWorld’s shelf life for other players who delve more deeply into that sort of thing.

RimWorld was nowhere near end-of-life in my books, but they’ve just launched a new expansion out of the blue.  I won’t waste your time, and just come right out and tell you that I’m really liking this expansion.  I’m going to go through a few of the things Royalty has added to the game that I really think gives it a great deal of value.  Don’t think this is a review, though.  This expansion is great, and this is me telling you why I feel that way. 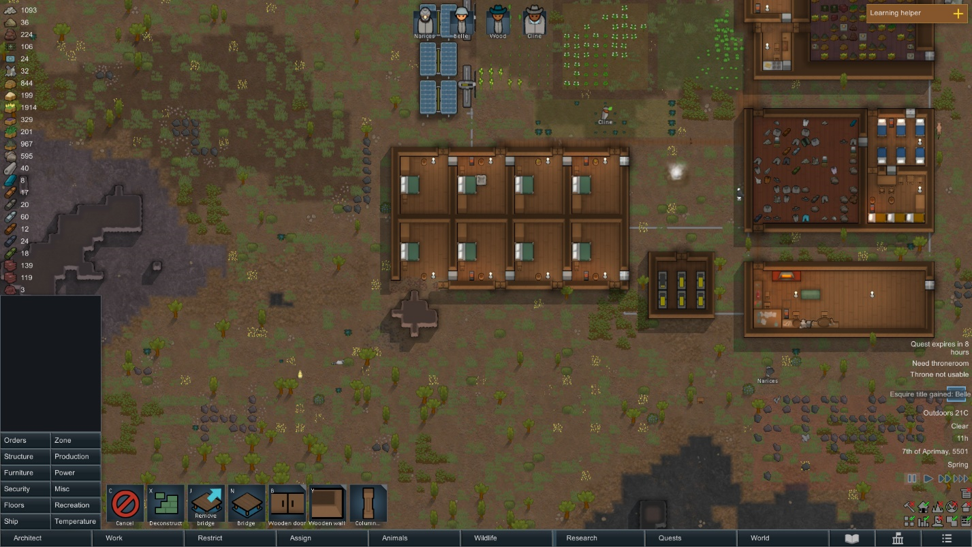 I’ve never had my colony hit by a meteor impact before, and it barely missed one of my toons, too.   Have I mentioned that I really like this game a lot?

Latent psychic abilities have been a staple of RimWorld, and a number of mods are out there to expand on the system.  In the base game, it’s always been this strange subtle feature of the world, though.  It’s there in the background and it’s impacted the moods of toons in general, adding a nice flavor to the game’s story, but it hasn’t really served a very significant purpose beyond that.

Royalty changes that by adding specific psionic abilities very early in the game play.  Toons that are psychically dull or deaf were an advantage because the periodic psychic drones.  That’s not true in the new expansion because characters can acquire beneficial psionic abilities, assuming they don’t have those traits.  One early ability I immediately found fantastic was “Burden,” which reduced the speed of the targeted toon.  After being attacked, it allowed me to chase down and capture the fleeing raider, for instance. 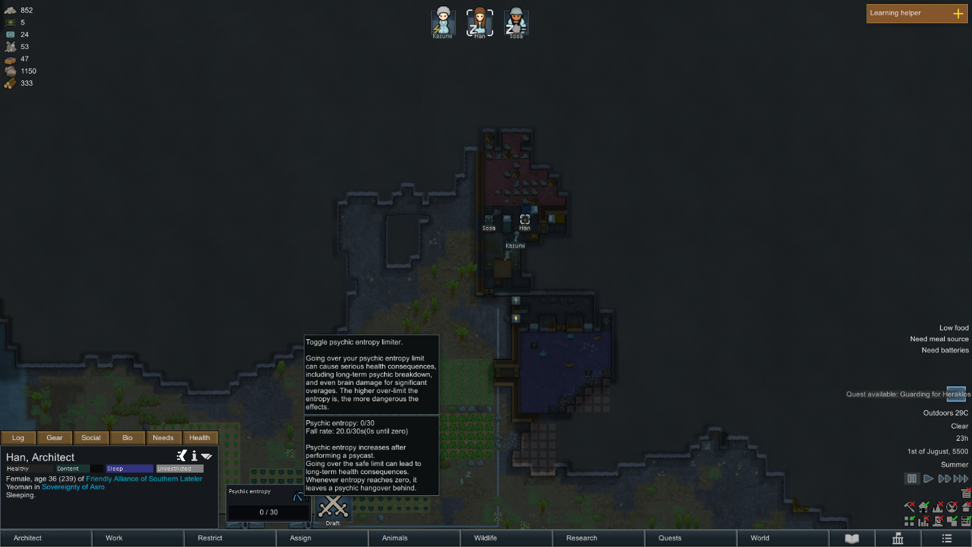 Using abilities generated entropy, which will degrade over time, but does ensure psionics aren’t game-breaking.

The new psychic abilities opened up by the Royalty expansion have created a lot of really cool new gameplay options, some of which will be discussed below.  What I find most interesting is the opportunity to change the way my colony engages in combat by focusing on various debuffs rather than increasing my weapon technology and trying to move to ranged.  This gives really good reasons to build troops more for a debuff-and-charge sort of strategy, especially because of the better chances of capturing prisoners.

The title component of the expansion is the new inclusion of a global empire faction and a host of imperial ranks.  Your toons can gain imperial favor, increasing their personal rank in the empire.  With this comes the authority to use increasingly enhanced psionic abilities.  Psychic amplifiers are delivered to the colony with each royal title granted of Yeoman and above.  Equipping the amplifiers grant a new ability, but beware that psychic amplifiers are restricted to those with titles by imperial decree.

Slotting a psychic amplifier in a toon that doesn’t have the appropriate rank will incur a negative hit to your relationship with the imperial authority on the planet.  There are more reasons than the amplifiers to increase in imperial favor and you’ll likely want to spread it out a little among all your toons anyway.

With each imperial rank, you gain access to the extra psionic abilities, but you also get specific imperial abilities and privileges starting at the rank of Esquire.  Once promoted to Esquire, a toon can request a Trooper Squad, which are modestly armed NPCs that will drop in and help defend the area for a short time with their automatic weaponry.  If you get rushed by a larger than normal band of hostiles, this is a great way to mitigate that bad luck. 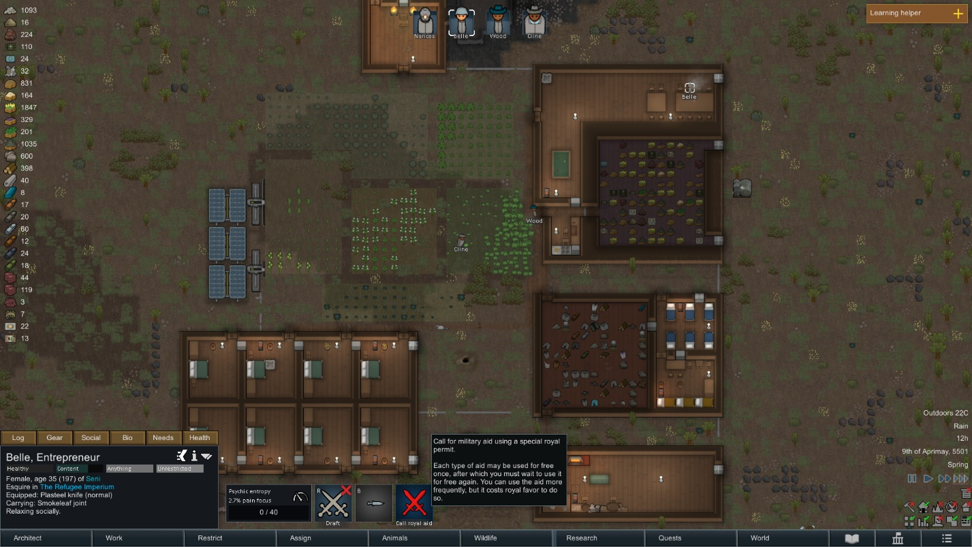 When you’re in trouble and need help now, call on Army Airborne… or, I mean “royal aid.”

Abilities like those used to call in troops can be used for free every few months, but you can also burn imperial favor to use the ability again as needed.  A really cool mechanic that turns imperial favor into something of a resource.  This means you have to think about burning that favor.  Is it better to hold on to it and get the next title sooner, or is the risk too great and you need those troops right now?

The other game mechanic added by imperial titles is the advanced needs entitled toons inherit with their newly designated greatness.  At Esquire and above, toons of a certain rank require a throne room and a personal room, both of increasing size.  They also have dietary and clothing requirements.  Like all requirements, they can be ignored if you don’t mind the hit to happiness it causes.

I really liked that a lot because it expands the demands of your toons as you approach end game.  RimWorld gets to a point where your colonies are so prosperous that you end up snowballing the end game content.   This expands the demands a bit in a way that grows as you get later into the game, and that gives you more reason to expand your colony and start new ones.  Those increasing demands will make the latter part of RimWorld much more interesting over time, I think.

Quests are a new type of event introduced to RimWorld through the Royalty expansion.  They provide new ways to get new colonists, resources, and additional imperial favor.  They also replace some of the optional events from the base game with newer and more cleaned up versions.  Those events have also been greatly expanded and are now more diverse.

Not all calls for help are for escape from raiders and not all who want help plan to stay.  One of the first quests you’ll get in a game is an imperial of some rank that’s fleeing some aggressive animal.  Allowing them into your colony and defeating the animal will grant you your first title. 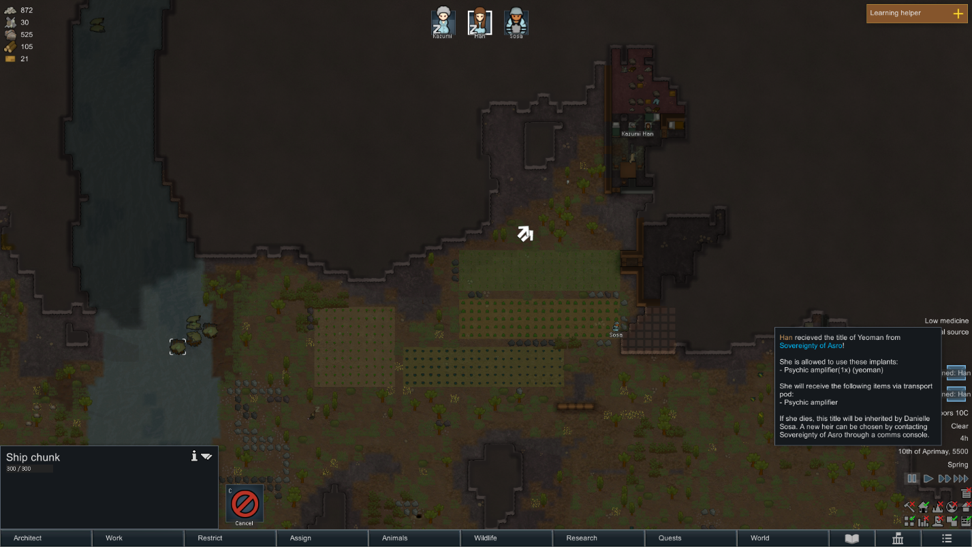 Very early in your new colony, you’ll have the chance to complete a quest and get your first title and psychic ability.

Other quests flow in over time offering opportunities to support or go against the empire faction and provide a great way to build favor over time for when you need to call in those extra troops on demand.  I also like that some of them have very high room requirements, which means you need to build rooms suitable for hosting imperial toons with higher titles and higher requirements.  Just another reason to have a few well-appointed rooms available in your colony.

Royalty introduces an expanded soundtrack to RimWorld and I think it’s just the icing on the cake for me.  The musical score of any game or movie is incredibly important to my enjoyment of the project.  It’s one of the main things that I judge games by.  If I turn your music off a few minutes in and never turn it back on again, you’ve lost an opportunity to dramatically make the game a more enjoyable experience, and you’ve wasted money doing it.

RimWorld is not one of those games.  The track list of the original was very simple and elegant in a fashion.  It reminded me of the score to my all-time-favorite (and untimely canceled) sci-fi TV series.  It had a touch of western to it, a little folksy, and a little rocky at times.   A great combination that really helped build a sense of theme for RimWorld, and I have no problem declaring that Alistair Lindsay has succeeded yet again.

In Royalty, the new soundtrack seems to have expanded nicely on the older score.  The flavor is still there, but some of the tracks are just a touch more sophisticated in their composition, which I think suites the theme of the expansion.  The aristocratic cultural tastes would expand somewhat on the simplicity of the average plebian, but there’s still a sense of that more simple progeny in the tracks that I’m enjoying.  It’s as if the aristocrats are enjoying their more advanced musical tastes while intentionally ignoring that the music, like they themselves, came from more rustic stock.  It’s probably not an intentional play, but it’s one that makes me chuckle to myself none the less.

The combination of the title system and the new quest system by themselves would have made Royalty a very worthy expansion to RimWorld, but the inclusion of the new psychic abilities provides a new tool that greatly enhances the re-playability of the base game in dramatic fashion.  Psionics opens doors for ways of playing RimWorld that once only existed through mods and makes them a part of the core experience.  There’s no way that’s not a homerun in my book.

If you’re a fan of RimWorld and you’re debating on whether to pick this expansion up, I think you should.  I’m recommending this expansion without reservation.  I’ve also purchased a stupid number of copies to send to all the kids in my family who play RimWorld.

Not only do I think the expansion is worth your money, but I just feel like this is a team that deserves your support.  They quietly updated a game that has already been very successful, and I really think the expansion is easily worth the $20 price tag, even assuming you don’t wait for a sale.  With Tynan’s record of maintaining the game consistently and how much I’ve enjoyed RimWorld to this point, I feel compelled to throw a little financial support that way when I can.  I’d like to see more games like this, and that’s how I do my part to make sure that happens.