Mount & Blade II: Bannerlord keeps surprising me.  I didn’t even know it was in development until it popped in my feed a couple years ago, and by then they’d already created a bit of buzz around the project.  Like a lot of games developed by smaller studios, it took a little extra time, during which it slipped to the background of my attention.

The game’s development was quietly chugging along, though.  Every so often, something would pop up on either my Steam feed or in YouTube to show me they were still working on the title.  Then, it suddenly had a release date and my excitement built.  The final surprise was the release itself.  I was expecting Tuesday the 31st, and everything I’d seen said to expect that date.  It made sense, Tuesdays are common for game releases, but then Monday morning I woke to see MB2B on Twitch and being played by several streamers I follow.  It’d released a day earlier than I’d expected.

Mount & Blade II: Bannerlord is fairly unique as games go, and there are a few things you should know before you buy.  I’ll delve into a few of the problems readers should be aware of walking into the game, and I’ll spend a little time talking about where I think the game was successful, too.  For fans of the franchise, I’ll also note a few of the changes you’ll want to also know about.

If you’ve never played a Mount & Blade before, you could quickly find yourself lost on the misty shores of the dark river that is this franchise.  I’m no Charon to help you cross, that you have to do on your own, but I can warn you a head of time about some of the challenges you face.

TaleWorlds Entertainment did a lot well with Mount & Blade II: Bannerlord, but one missing element is the new-player experience.  There is a tutorial of sorts, but it’s incredibly superficial.  You’ll learn basic controls and get an early start on game lore, but tons of key details are missing.  In a game as complex as Bannerlord, the missing information can be really daunting for new players.

On one hand, this is sort of a long-paced game and you’ll have tons of time to figure out everything that matters, but I think that initial lost feeling can also be a little off-putting.  Oddly, it made sense in the last game because you started off freshly escaped from bandits and in a foreign land, so a bit of dysphoria seemed appropriate and was additive in that context.  The initial story in this one is that you and your brother are trying to track down the bandits that captured your younger siblings and killed your parents.  This time, you have a sense of personal history and know where you are, so that feeling of being disassociated from the world doesn’t fit as well. 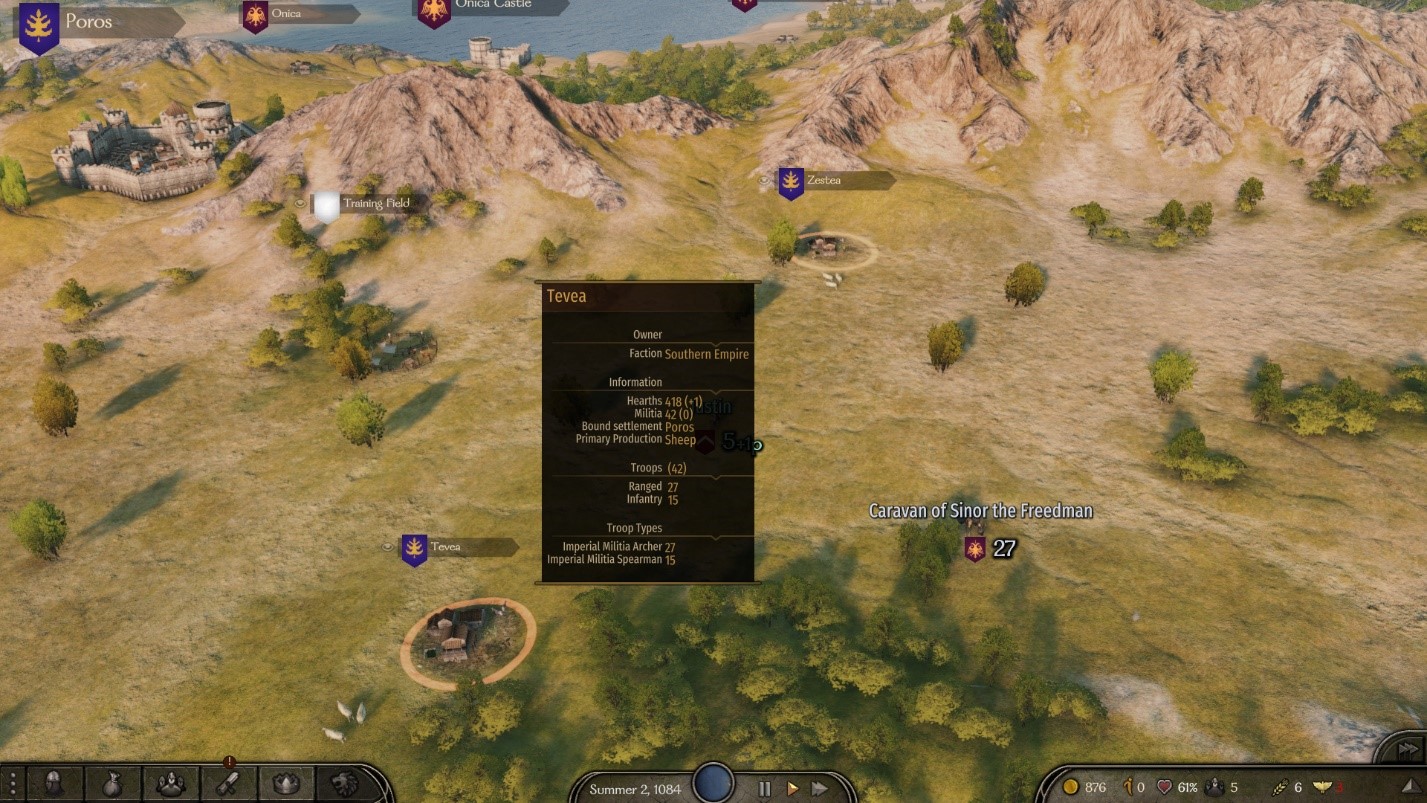 The tutorial could have done a better job of explaining things like the fact that villages have a primary production, which is cheaper to purchase at those locations and is also very helpful information that is needed for some quests.

More robust tool tips are one thing that could improve the early experience dramatically.  Much of the lost feeling stems from the depth and complexity of the game, and simple things like understanding the difference between butter, grain, and grapes in your inventory would help a lot.  Veteran players know the role food plays in troop morale, but the tutorial only makes a very brief and unenlightening mention of it.

A tutorial built less on rails and more event-based is really needed for new players to the series.  Even older players may struggle as Bannerlord introduces new systems, like crafting.  The quest system has been greatly improved and might even be an ideal method for presenting a better event-drive tutorial.  Hopefully, that’s something TaleWorlds can include in the robust cycle of early patches we’ve seen so far with this game.

The UI could also use a bit of help, as well.  It’s not terrible once you’ve figured it out, but it’ll be a little wonky at first for even veteran players.  I definitely found troop commands a little awkward during my early experience… Still do, if I’m being honest.   I often hit the wrong key to deploy my troops, because I haven’t built the needed muscle memory yet.  I suspect this is going to be more of an issue as engagements get larger and more complex.  It’d be nice if you could develop some sort of pre-defined engagement orders for your units, or at the very least define an initial formation.  With all the new formations available in Bannerlord, I’m expecting this to be one of my biggest consistent issues with the game.

Right off the bat, let me say all is not wrong with this game, though.  Composer Finn Seliger absolutely killed it with this score and shows clear influences from Basil Poledouris as pounding war drums and hunting calls from aggressive brass clearly echo a certain hero that ruled between the time when the oceans drank Atlantis and rise of the sons of Aryas.  It’s a powerful and diverse soundtrack that perfectly captures the spirit of the game and the disparate cultures represented in it.

While not well presented, the complexity and the depth of the game is a great plus in my book.  Bannerlord introduces crafting in the form of blacksmithing.  I haven’t had a chance to really play with it much, but clearly you can collect resources from villages that produce raw materials and use those resources to craft arms and armor for yourself and your companions.  A really interesting option that’ll make control of your own villages even more interesting later. 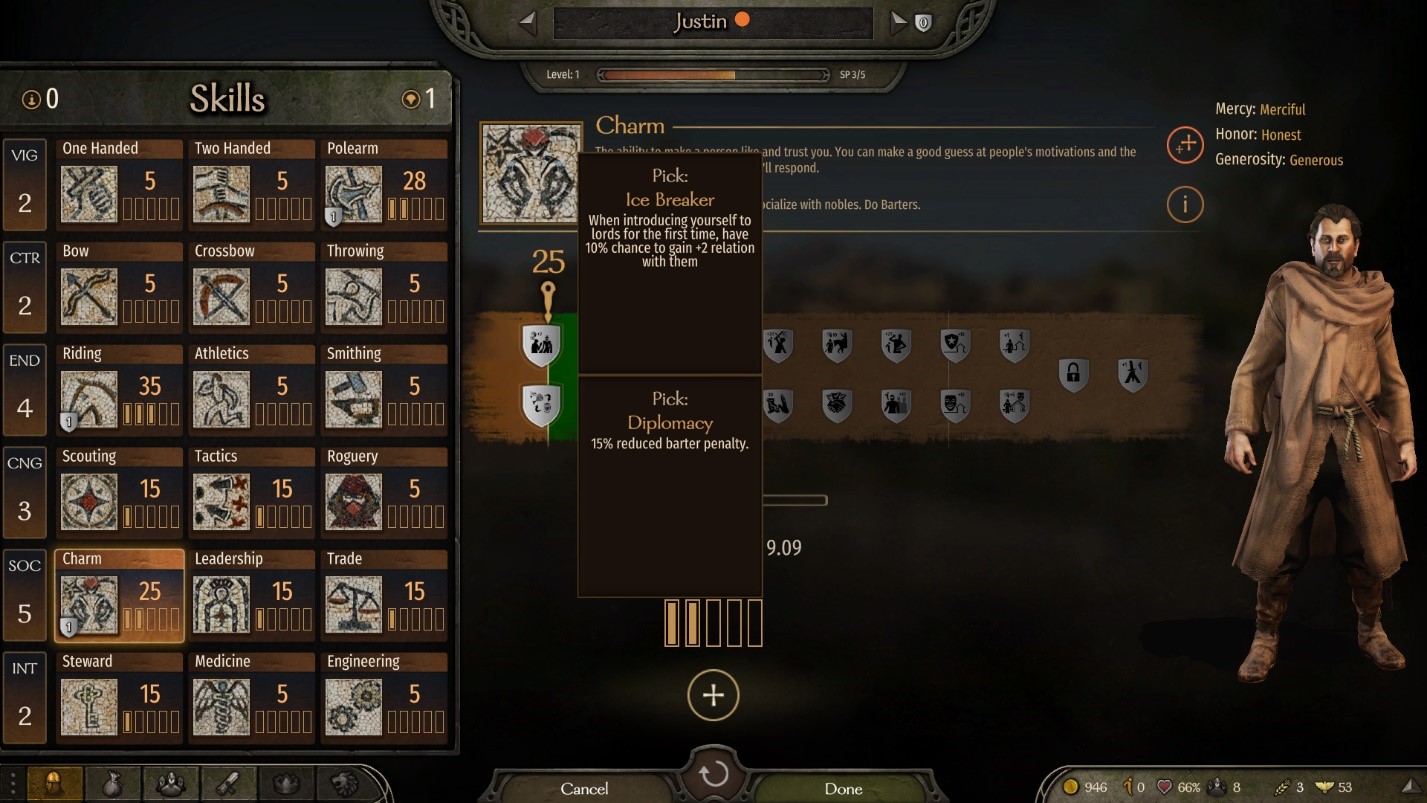 Returning fans will find a new and more complex skill system that isn’t explained well and will need a little time to comprehend but is very interesting once past that initial learning curve.

The crafting system is a great alternative use of looted gear, too.  Sometimes you’ll want to get the cash from gear, but eventually the resources will become more important and you’ll spend more time breaking gear down to craft better for you and your companions.  It’s a system that adds another dimension to the game and provides expanded options for those who want to try the game playing a less combative character.

The new quest system is another great improvement that franchise veterans will appreciate.  There are some bugs to be worked out, but the system is still a dramatic improvement.  Not only are quests indicated at the top-level community screen, but the quests themselves are often interesting.  I especially like how your stats play into some of the conversations, offering you alternative ways of resolving conversations and the quests they relate to.

While Mount & Blade clearly had culture and in-game history, the historical depth of Mount & Blade II: Bannerlord seems to be explored much more thoroughly.  I’ve found the depth and complexity of what’s there to be truly exceptional thus far.  It’s a story that harkens back to the fall of the Holy Roman Empire crossed with some of the civil disputes of early Rome and Byzantium, with Celtic rebellions and a little Arabic expansionism thrown in for flavor.

The mix of cultures is a ripe breeding ground of epic stories as a number of events inspired from early European history all culminate in a hotbed of political drama.  Players have the option of siding with one of the three imperial factions in an attempt to reunify and then restore the glorious empire of old, or to align themselves with one of the fascinating cultures surrounding the outskirts of the empire and attempt to capitalize on the civil squabbles to establish a new order. 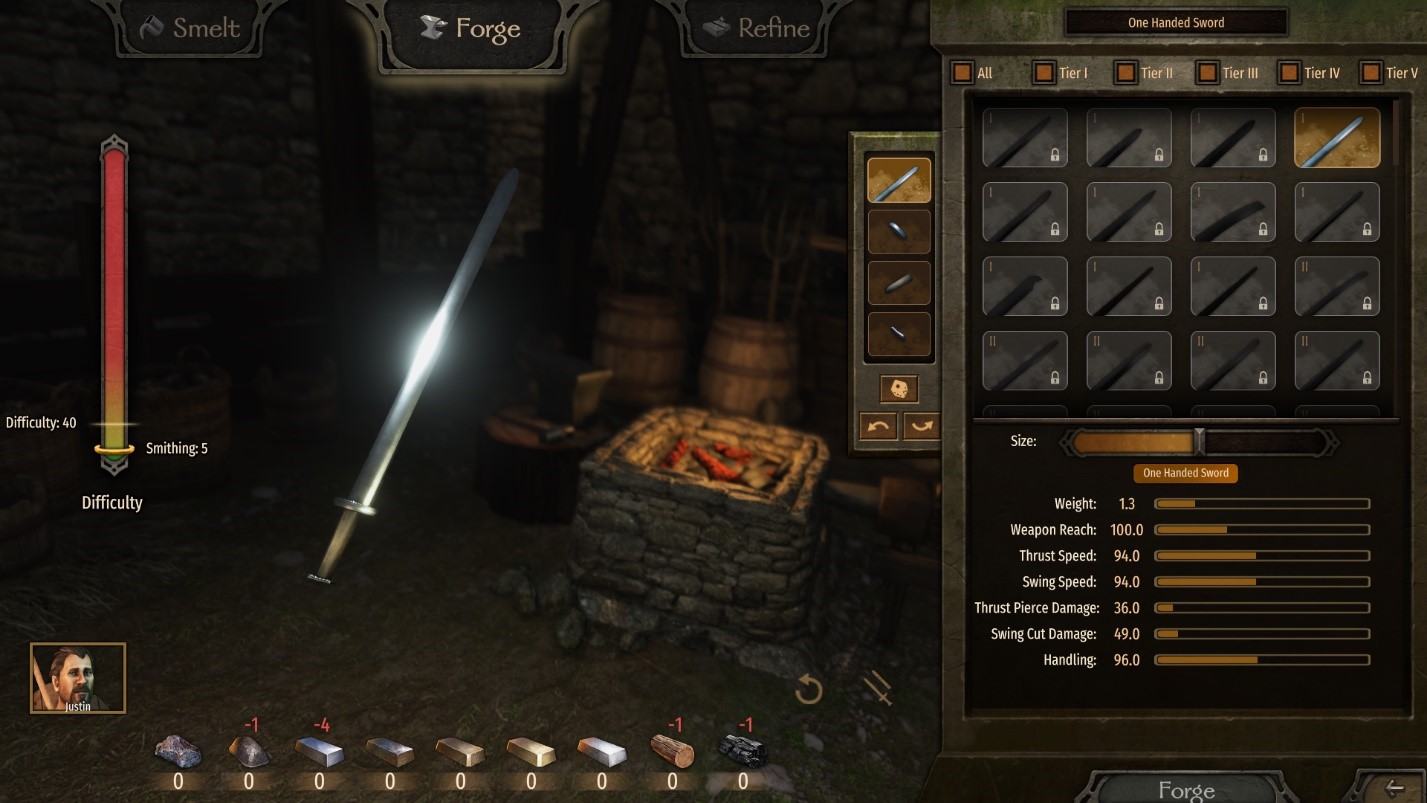 The new crafting system will really open up some interesting gameplay options for players.

If you asked me if I recommended this game, I’d gush about it for an hour and finish with “it depends.”  If you like these sorts of games or if you played the previous game and enjoyed it, then there is no question.  Pick up Mount & Blade II: Bannerlord immediately.  It’s a blast and it’s everything the previous game was but done better and with improved graphics.  This is a phenomenal game and I’m loving it.

However, if this is your first venture into the political/military/economic/kingdom simulator via RPG genre that I just invented for Mount & Blade because it doesn’t really fit in any other genre, then you should do a little more reading and watch a few streams before you decide.  This game is deep and will eat a truckload of your time, but it’s also a little complex and the new player experience is a little lacking.  You’ll also find a handful of issues that frustrate you, such as an occasionally bugged quest system, but that’s all the sort of thing to be expected from a smallish studio. 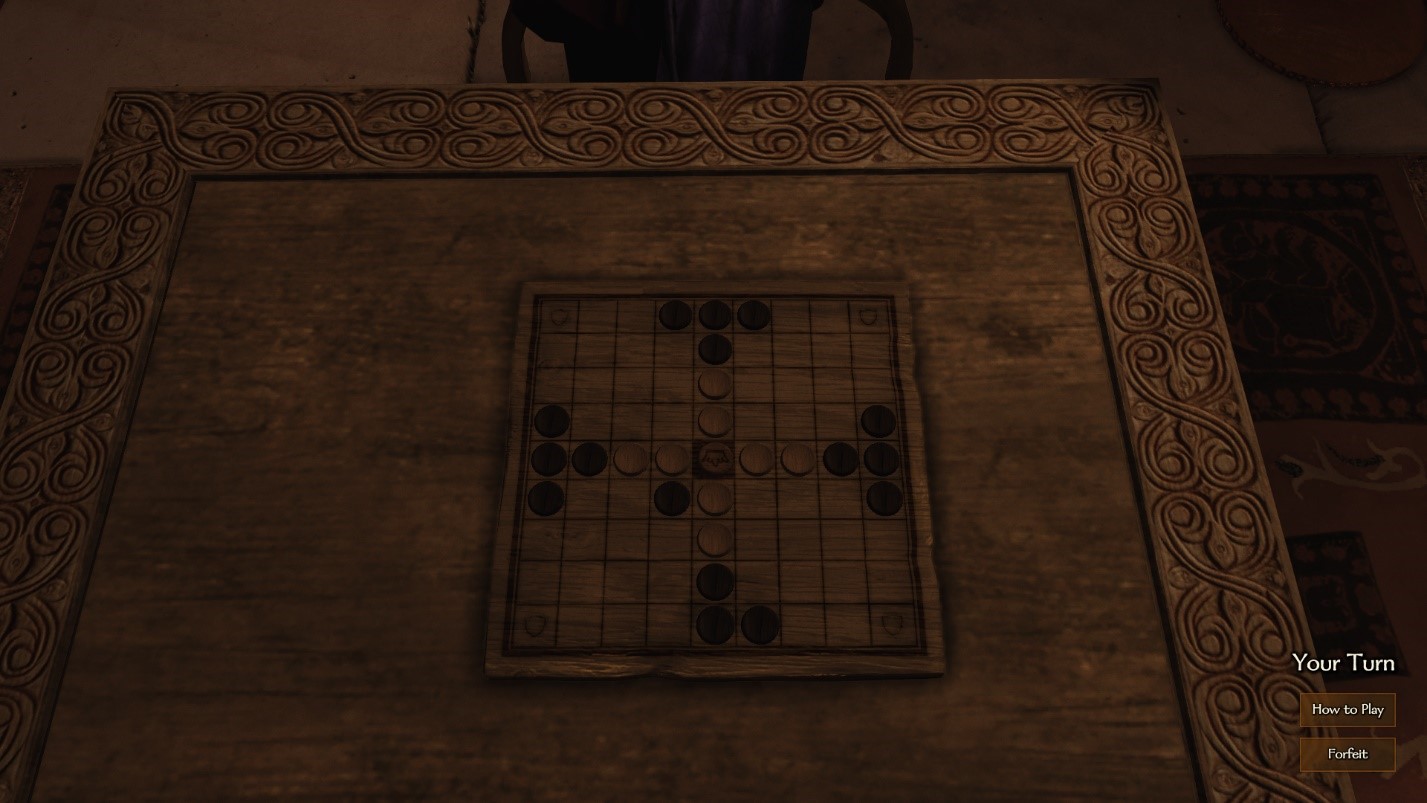 I still don’t know if playing the in-game capture game has any practical purpose, but it is kind of fun and makes for a nice break from other stuff.

If you look past that, then you’ll find a very unique game with mechanics and freedom of choice in equally uncommon measure.  I find the game easily worth the $50 price tag, but I kind of question whether others will.  On the surface, it seems an absurd price when comparing the up-front quality of the game to other similarly priced titles, but my feeling is that the long-term re-playability of this game far outweighs the slightly high cost.  But then, that also has to be qualified with the caveat that this won’t be a true statement for everyone.  If you find the idea interesting, there’s a very good chance that this will be one of the most played titles in your library.  If you’re on the fence, you really need to spend time thinking about it and learning a bit more about the game, though.

That’s probably a true statement of most games, but the price makes me feel it’s a little more important to foot-stomp on this one.  Like its predecessor, Mount & Blade II: Bannerlord will be around for a very long time.  The price will drop over the years and new players will constantly be unlocking the epic emersion of TaleWorlds Entertainment’s incredible work.  The only question is whether you want to pay the premium to play the game now.  It’s pretty clear where I fall on that subject, though I’m always interested to get your thoughts below.  Leave a comment and let me know what you think.