I spent the first 20 years of my life on a ranch, even rounding up cattle on horseback to drive them from their Summer pastures to the lots where we worked them before turning them out to their Winter pasture.  I lived the cowboy lifestyle and grew up on John Wayne, Clint Eastwood, and Kirk Douglas.  She Wore a Yellow Ribbon is still one of my favorite films of all time, and later movies like Hondo, True Grit, and The Outlaw Josey Wales will always get me to sit down on the couch and lose track of a few hours.

My absolute favorite scenes of all time both come from 1993’s Tombstone.  One is the scene in which Bill Clanton, played by Thomas Haden Church, suggests Doc Holiday (Val Kilmer) is so drunk he’s seeing double, Doc pulls his second pistol letting Clanton know that he has a gun for each of him.  The second is the one in which Wyatt Earp (Kurt Russell), while beating a loud-mouth, asks him if he’s going to jerk that “smoke-wagon” or just stand there and bleed.

Those are moments of pure pleasure and old Western films are full of moments of joy and the celebration of rugged individualism for me.  A coincidence this last week in which an ordered motherboard failed to arrive in time left me without a computer and thus missing content for an article.  I started looking games I could play on my laptop for this week’s article, and when I noticed that Desperados 3 is releasing next week, I decided to take a crack at Desperados 2.

Hoping to catch a bit of nostalgia and possibly tease myself into purchasing the new game next week, I purchased Desperados 2: Cooper’s Revenge on Steam, opened my new bottle of Fuenteseca Extra Añejo, and sat down to dust me some banditos.  As you might have guessed, it wasn’t all roses for this fourteen-year-old game.  Though, no one would expect a game that’s older than my tequila to really be revolutionary.  I’m not recommending it, but there could be some good reasons to play the newest one when it releases, and that’s part of what I wanted to explore in today’s article. 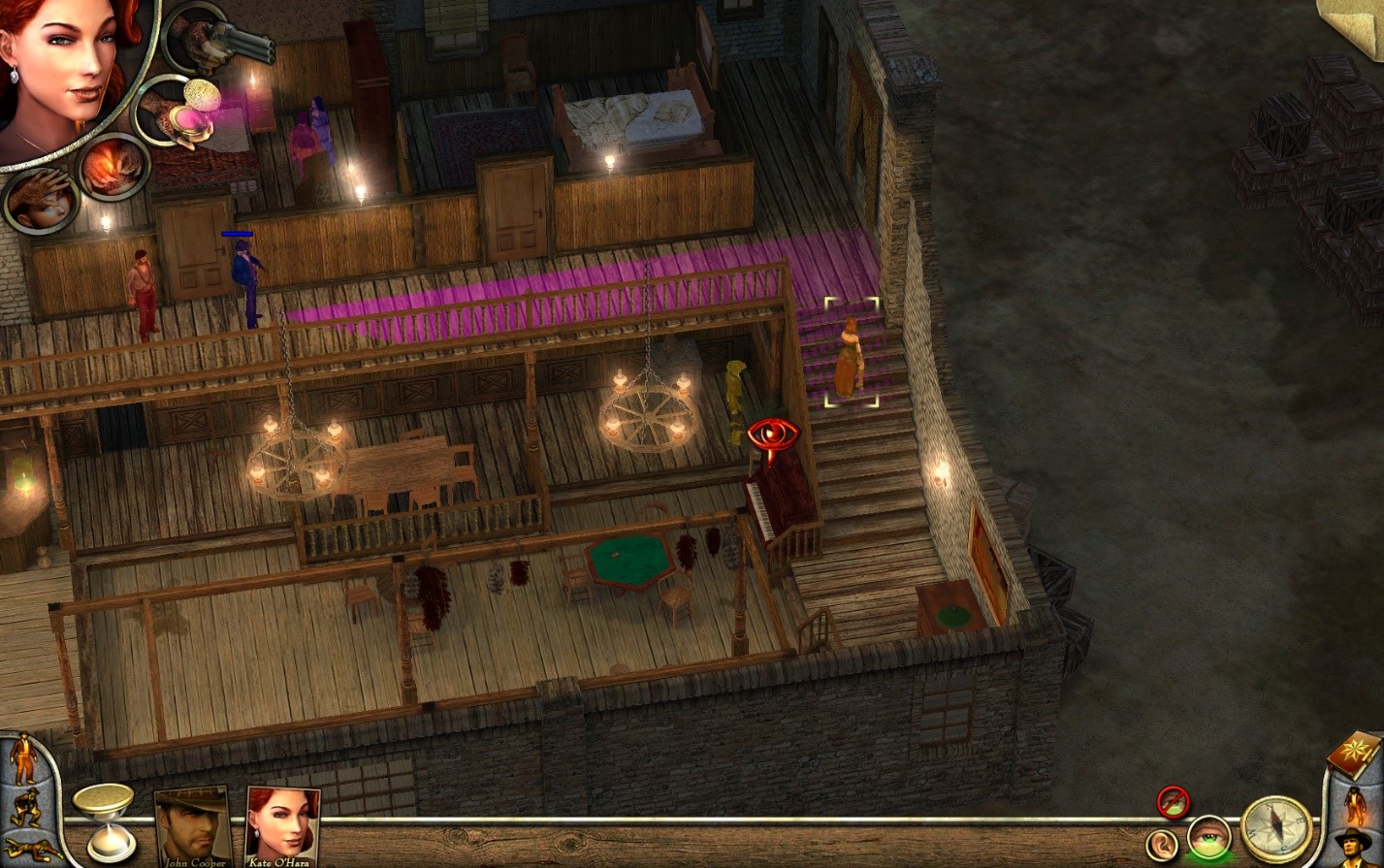 The tutorial failed to fully explain the mechanics or the various abilities.  Even with some experience in the genre, I experienced some unnecessary confusion while playing.

Right off the bat I was challenged by Desperados 2, and not in a great way.  The controls were absolutely terrible.  I never played this game, but I did play Commandos back in the day, and the Desperados franchise is cut from the same cloth.  I don’t remember Commandos having such a difficult control scheme.  Right mouse turns the camera as you go right and left, but it zooms in and out as you move up and down, and that is most definitely not a pleasant experience when you’re first playing a game.

I’d blame the problem on over a decade of retraining and refining what “normal” is for controls, but plenty of RTS games and third-person dungeon crawlers like Diablo had demonstrated a clear standard for top-down controls.  The choice is just odd, and it extends to other strange controls beyond just the camera.   You hit “G” to crouch for instance, so try and remember that one in a game that plays in real-time. 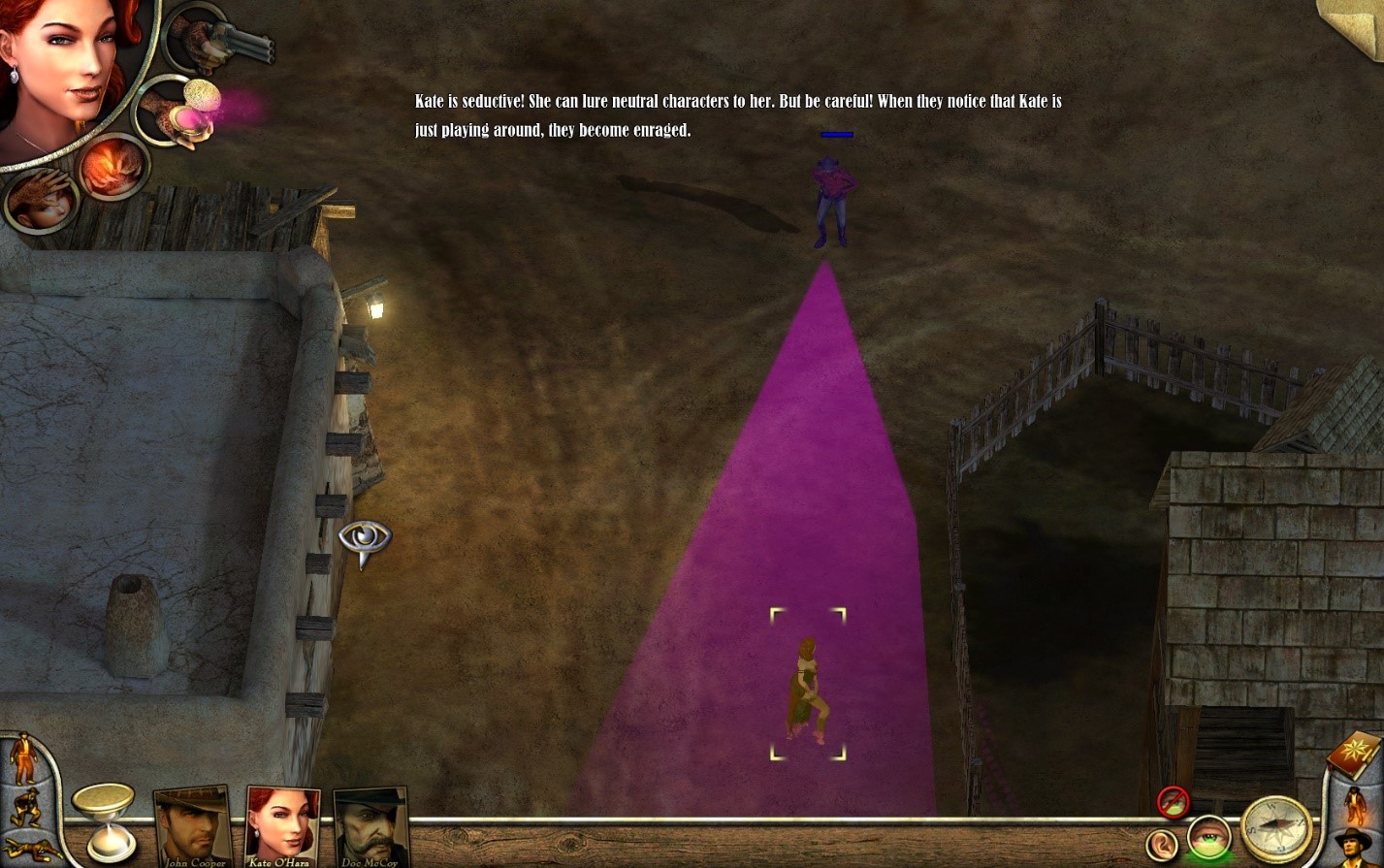 It was odd that the same situation worked for me one time and didn’t another.  Poor UI choices made it difficult to understand why there was a difference between the attempts.

Other issues plagued my experience, too.  I had trouble grasping what the UI was trying to tell me.  I found things like understanding the number of consumables confusing and also had trouble figuring out which abilities I had activated or if I needed to even activate an ability to use it.  The seduce ability on one character for example, I had clicked on it and gotten no feedback.  Standing in view of an AI character, nothing happened.  Eventually, I approached and was attacked.  On the restart, I tried it again.   This time, the enemy view cone turned purple and the seduction seemed to work.  What’s the difference in those two attempts?  I have no idea.

There were some things about the game that I do like, though.  For one, the idea of an attractive woman baiting the bad guys with her feminine wiles, thus allowing the hero to get the drop felt right out of one of those old Westerns that I love so much.  Miss Kitty assisted the famous Matt Dillon through a fair number of tough spots, and at least of few of them even involving bad guys.

Kate O’Hara is cut from the same cloth as the intelligent, self-aware, and very capable Kitty Russell.  She may not own her own saloon, but Kate’s happy to employ her long legs in support of her friend John Cooper when needed.  A sharp wit and worldly point of view give added interest to her dialogue and depth to the character that makes you want to explore the game more. 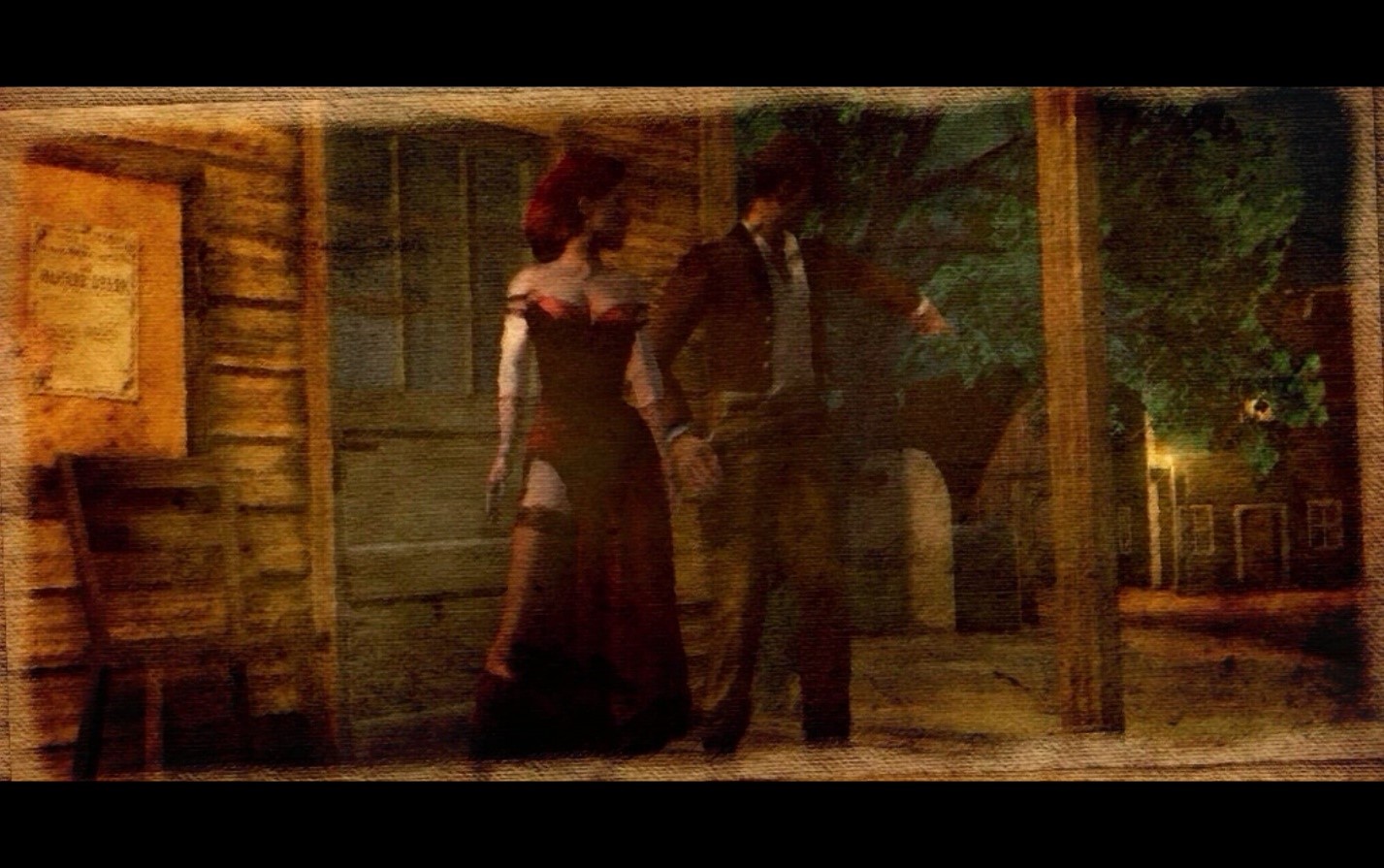 Kate O’Hara is an interesting character.  I might be projecting a bit of Gunsmoke nostalgia into the situation, but I really like female characters that embrace sensuality, intelligence, and self-awareness.

The music is right out of a Spaghetti Western and fits the tone of the game precisely, adding just the right cinematic touch to the game.  The score isn’t overly complex or inspired, but then Ennio Morricone didn’t work on every Western film and plenty of those old Westerns had pretty forgettable scores.  The result in Desperados is a soundtrack that gets a little old after a while on its own, but when hearing it in the game, the tracks fade to the background just enough to not get in the way of the game while still giving the player the sense of being in the movie.

For a game as old as it is, the graphics weren’t that bad.  More importantly, the scenes had an authentic feel to them and the towns weren’t much different from photos of period settlements around El Paso and Santa Fe.  Good level design and interesting conversations between AI are things that should carry over into the new game and are enough to get my interest up. 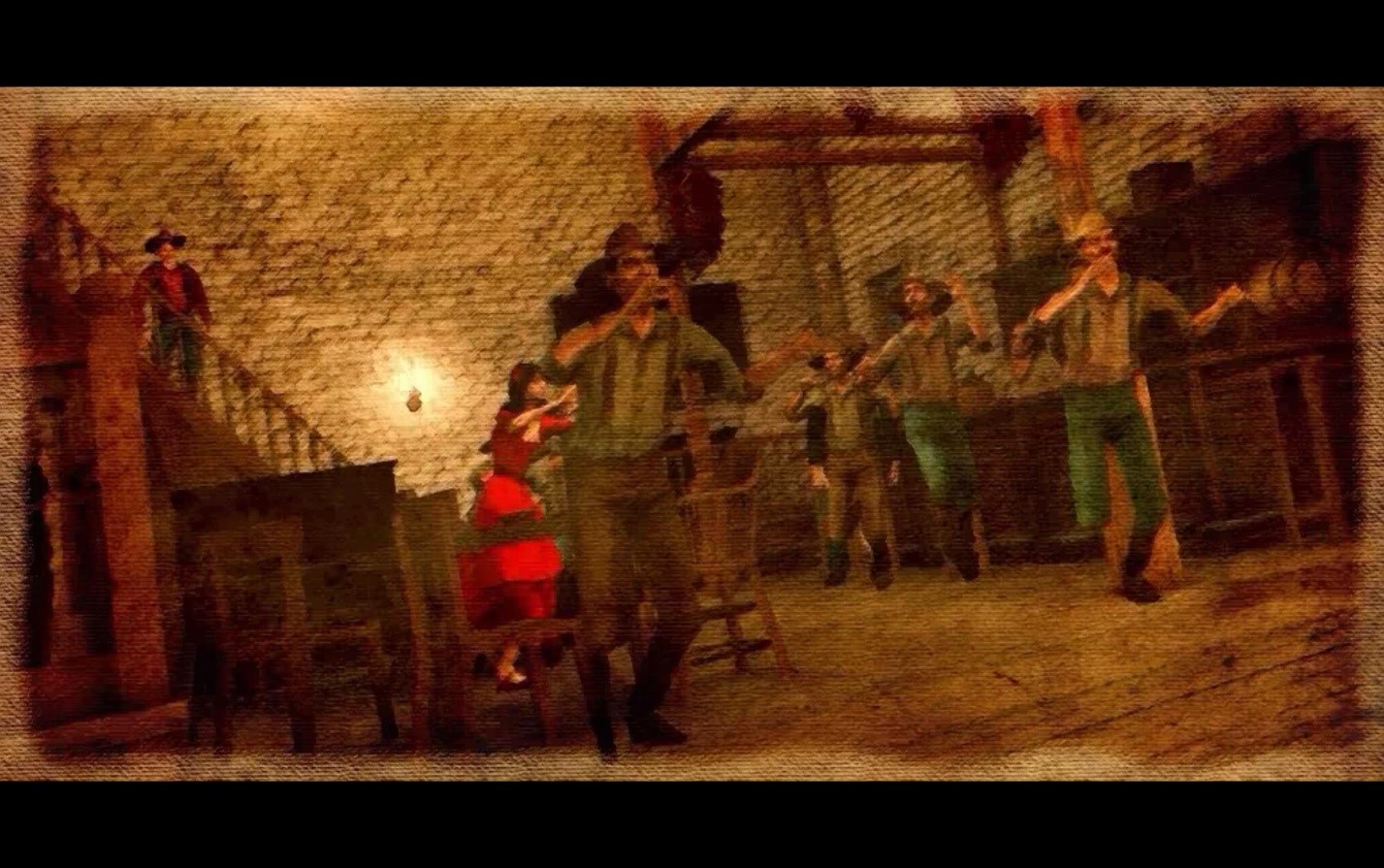 I liked the stylized cut scenes.  I felt they fit the game well and were an intelligent choice at a time when graphics weren’t quite up to doing the scenes justice otherwise.

Living in Texas and growing up a rancher placed me in the obvious target audience of Desperados 2: Cooper’s Revenge, yet I still missed it the first time around.  That was probably a clue, but I gave the game a shot anyway.  Questionable control choices and graphics that have not held up well make it difficult to recommend the game, even at the $10 price point on Steam.

That said, there are interesting characters, a cool and under-appreciated genre, and a great setting that make the upcoming sequel much more interesting than you’d think.  I’ve cheated a bit and snuck a peak at some of the soundtrack, and the newer score is much better than that found in either of the older titles, though it does feel less like that grand cinematic experience to me.  The graphics are obviously far more updated in screenshots from the upcoming title, as well.  Updated look and improved sound are enough to make me interested.  Whether the control scheme will be better thought-out is the question that concerns me.

I know it’s odd to play a game you can’t recommend and still find that it makes you interested in a sequel.  This is a first for me, and it’s certainly an odd experience.  I’m excited about the knew game, while still being worried.  I’m also a little concerned that the tropes of the classic cowboy flick won’t translate well to a modern audience, but then that nostalgia part of me kicks in and doesn’t really care.  I do hope the best for them, as the last couple games I’ve played that were set in the Old West failed to speak to me.  Maybe the next one will be my “huckleberry.”