True horror is uncommon.  That is to say the phrase is common, but few in the developed world really ever truly experience the ambiguous dread that H. P. Lovecraft so brilliantly captured in his twisted treatises at the turn of the 20th century.  We have artistic interpretations of horror that are relatively commonplace, but I’d argue that such efforts are far more in the realm of fear than they are horror.  The two terms are similar and do overlap, but they only share a general direction on the emotional diagram and are not the actually same.

Fear is primal and animalistic.  It’s something that strikes us all in many situations, but most often through the jump-scare tactics of “horror” films or the dramatic suspense of more thoughtfully and skillfully offered features.  It’s not horror, though.  Horror has at its root an even deeper question about the nature of the universe.  Because we understand so much of how the physical world works now, the unknown required to instill true horror is mostly missing from modern culture.   That unease that comes from knowing something is true without really understanding it is the genesis of myth and the birthing ground of real horror.

Through very intelligent choices, Weather Factory has produced a game that I think many may enjoy a great deal as we lead up to All Hallows’ Day and the mysteriously mystical energies that manifest during these weeks.  What Weather Factory does best in Cultist Simulator is intriguingly what they don’t do, which is provide answers.  Let’s delve into that ombré question further and explore some of why this might be a game worth your consideration.

Cultist Simulator is one of those games in which you’ll lose a lot and, in that sense, creates an almost rogue-lite sense of moving just a big further through each attempt.  Readers need to know going in that there is very little hand-holding in this game and while there are a few tutorials that help get over that initial learning curve, I’d actually recommend against them. 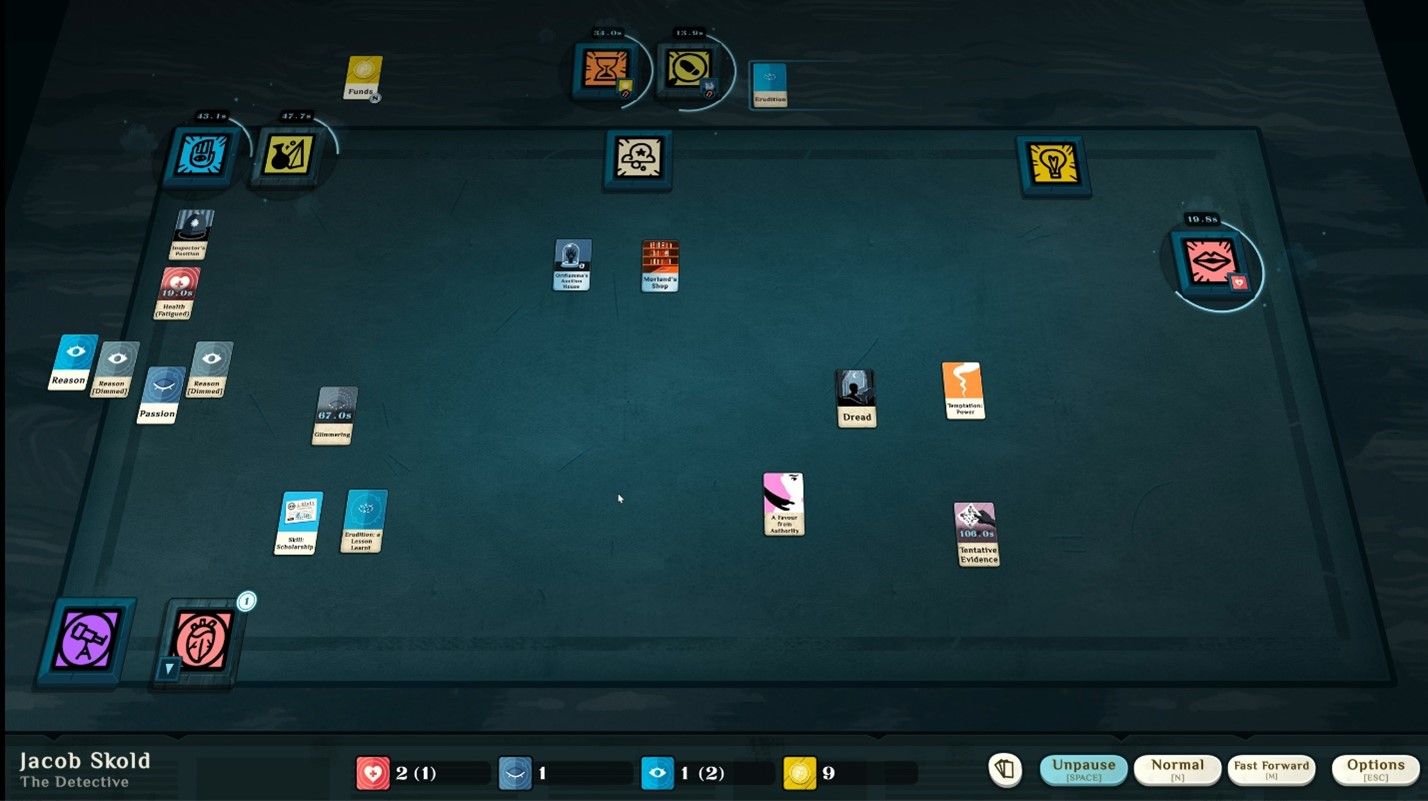 The table is set with cards (nouns) and tiles (verbs), the combinations of the two dictate the unfolding of the story.

What I enjoyed most about Cultist Simulator is the sense of mystery and discovery that come through playing the game.  The Glory of knowing what you can do with a given card or killing yourself unexpectedly by making a bad deal are all part of this greater experience.  As you learn more about the game, survive longer, and unlock the secrets of how to not die, you find yourself awakening to this fascinatingly multi-shaded world.

One of the things that Cultist Simulator does so well is blur concursum between moral and immoral choices, and not just in the really simple limitation of choices way that many games blur that line, but by literally allowing you to accidentally engineer situations in which you truly aren’t sure what the moral choice would be.  A moment of deeper introspection and you might even find that you’re also not sure if you even care.

It’s a mind-game that through the digital medium allows you to momentarily become the head of a secret society, tangentially experiencing the surreal sense of madness inherent in that sort of an individual and the mental stress of pushing the bounds of the metaphysical.  An initial glance would lead you to think that the game was simple, but in a feat of genius game-design, Cultist Simulator is nowhere near as basic as it first appears.

The brilliance of the design is that it’s actually an echo of the story and serves to reinforce the idea of truths within truths, the many-wrapped shadow.  The play of the game is a very simple set of mechanics.  The player is provided with a set of “verbs,” or icons on the table that are time-dependent in some way.  The verbs act on nouns (which are the various cards the player organizes on the table of the digital play-scape).

Some verbs appear randomly, because life happens and not always of our own volition, and these verbs attempt to satisfy themselves automatically with available cards.  Depending on the nature of the verb and whether or not it’s satisfied, new verbs or nouns appear.  This presents not only a dynamic element to the game, but also helps to impart moments of frustration and futility to the player as complex plans are ruined by chance.  The deliciously excruciating experience of being swept into something larger than oneself pulls forth yet another dark gift from the mother. 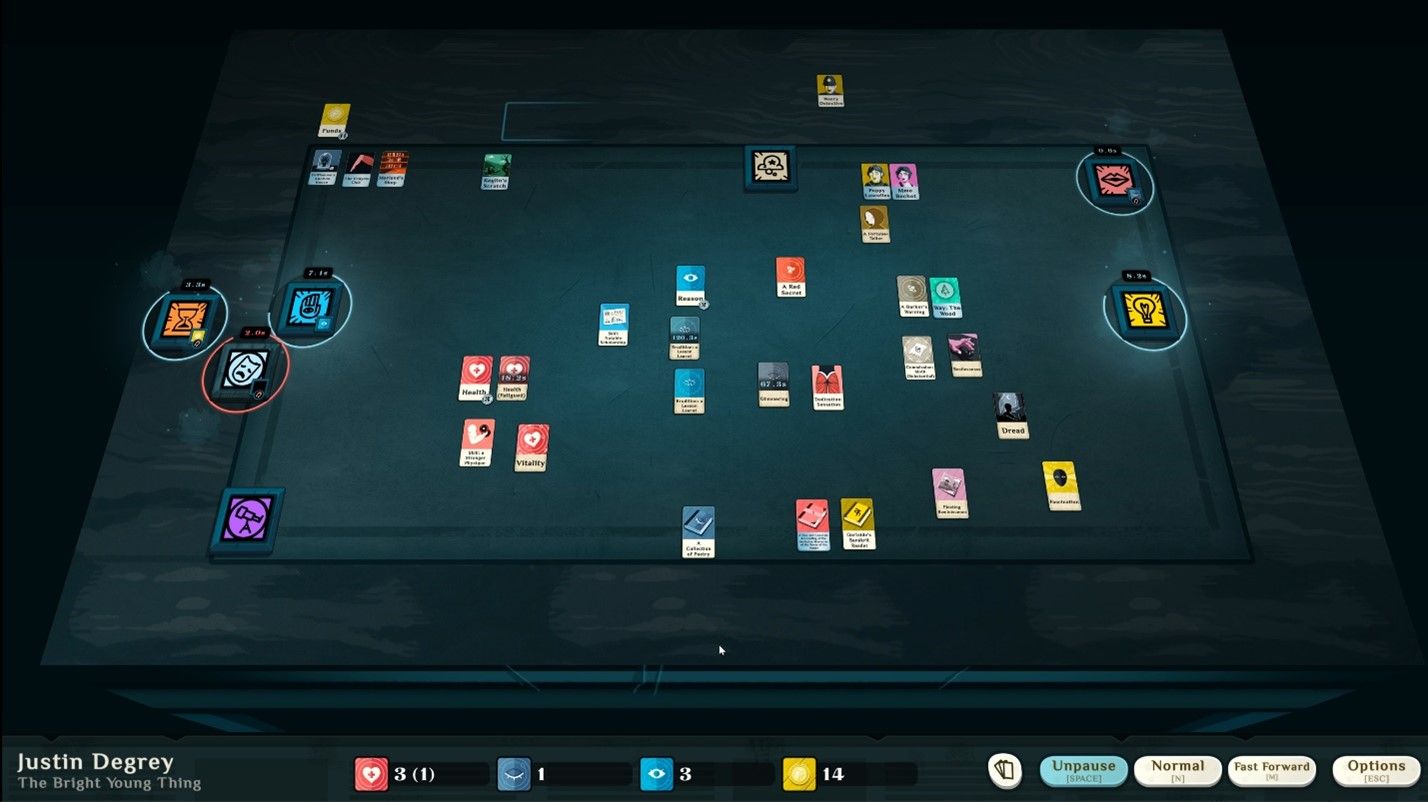 You can start with different “Legacies” which totally change the experience of the game.

Life is random, but not totally.  Limited free choice is represented by a number of verbs, or actions, that the player can activate at will.  For instance, “Work” is the action of converting one resource into another.  You might convert your health into money through manual labor, or you might employ your creativity to convert inspirations into a project that might bring some cash, if you’re lucky.  Said project might also net the player some amount of unwanted attention in the form of notoriety or mystery.

As words of a book capture thought via the eyes, so do the notes of music carried by air to the ear capture the soul.  Maribeth Solomon demonstrates her experience and masterful grasp of the craft through the soundtrack.   Cultist Simulator succeeds in establishing a sense of uneasy dread in large part due to an exceptional score.

The haunting notes of the piano are pushed just slightly out of phase through various edited sound effects to create this perfectly layered tapestry of haunting mundane alternated with the discordant sounds of something else.  As Hans Zimmer once said, “in music, you’re basically having a conversation.”  Solomon asks questions through her work in Cultist Simulator to which we’re forced to seek answers, even as we know those answers have a high chance of destroying our minds.  Dark answers tickle the ear like wispy filaments shorn from the crown.

Like a candlelit dream swaddled in the velvet layers of mystical knowledge, the music prepares our souls to receive something more.  Few games give their composers the space to express themselves so robustly, and even fewer composers succeed so well as Maribeth Solomon in marrying precisely their opus with the game. 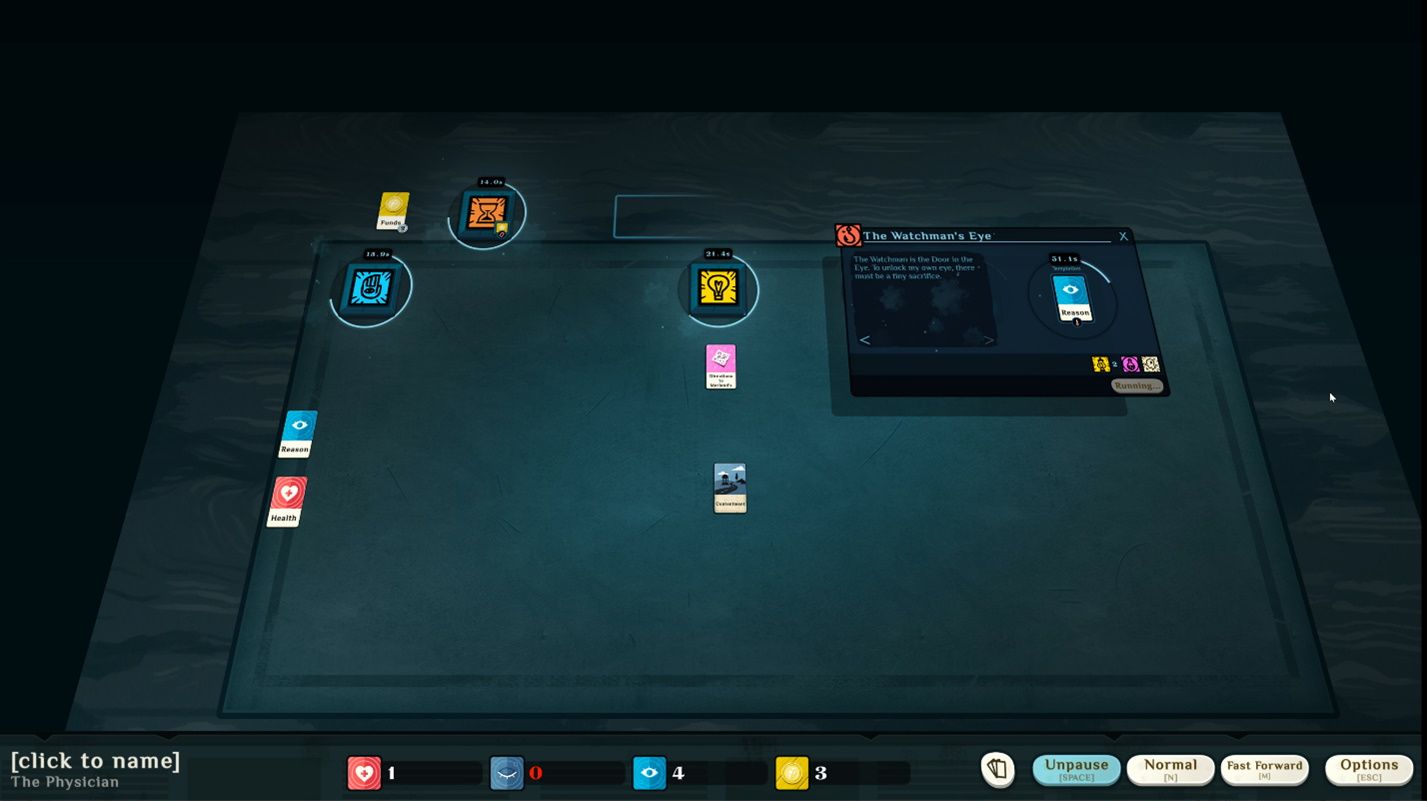 Sometimes sacrifice is called for, but will that sacrifice simply position you for a greater fall later?

Dream’s door is but the gate to knowledge for those who would sip the spiced cordial to its last and through that sacrifice of the self, earn a question from the Keeper.  Answers.  Always the answers, but to no avail.  Knowledge is a poor imitation of knowing without a worthy question to guide it.

Those who enjoy an imparted sense of the unknown and revel in the face of Moth-guided mystery may really enjoy Cultist Simulator a great deal.  It does a fantastic job of presenting the maybes that make the hair on our necks stiff with possibility and this is most definitely the appropriate season of a particularly auspicious year for dipping our toes into the cold waters of unease.

Cultist Simulator is not a traditional game with clear objectives and victory conditions, unless you count simple survival a victory.  Readers looking for a more traditional experience might give this one a pass unless a sale opportunity presents itself.  Those who occasionally enjoy something a little different, such as myself, will find something really special in this title, though.

It’s very rare that I play a game that so fantastically captures the true sense of primordial horror that Cultist Simulator successfully instills in moments of unexpected clarity.  The developers do a fantastic job of building this sense of seeing things happening around you and knowing that they’re connected without really letting you understand the actual nature of  the connection.  The best part is that the closer you get to putting together the pieces and understanding the forces controlling those disparate oddities, the more surreal the experience becomes and the more unnerved you begin to feel.

If that’s you, then I recommend the game.   Your part is to determine whether that recommendation is because I think you’ll enjoy the game… or whether it’s because the game might enjoy you.