I’ll start off by acknowledging for those who often find it difficult to enjoy a game for what it is that Last Oasis is early, rough, and loaded with problematic bugs.  None of which outweigh all the things I’m enjoying about the game, though.  As with most PvP-heavy sandbox games, Last Oasis is a game where the players provide the content, freeing developers up to focus on complexity and depth of in-game systems.

My experience in Last Oasis has been fascinating as a rolling tide of modern Mongolians sweep their way across the map subjugating all the clans they pass over.  In their path, coalitions of free clans unite to push back the onslaught of that digital horde.  Hampered by infighting and drama, it’s a question of whether the clans can pull together their disparate efforts to protect their claimed territory, or whether previously subjugated clans behind the current lines of conflict will first revolt and create enough logistical disarray for the federated clans to achieve ultimate victory.

The drama and political depth that players can’t help but create among themselves always makes for the most compelling stories.  No matter how rough the environment, it’s a recipe for some of my most fondly-remembered games.  My favorite things to do in these sorts of situations is to invest my time into crafting and trading, which eventually leads to my ultimate goal of intelligence collection and clandestine support for allied operations.

I love playing the long game with the market and providing my adopted team critical information, all backed by a network of intelligence activity.  On the surface, it’s just about making in-game money, but economic information is always informed by political and military action.  Follow the money, and you sometimes know what adversaries will do before they do.

Last Oasis has a cool crafting system that takes a bit more to figure out than some of those other games that I’ve enjoyed over the years.  I started trying to get my feet wet in the industrial side of things this last week and learned that I’d made a number of mistakes.  I also failed to understand several critical pieces of how the crafting in the game works.  I thought I’d help readers who are interested in starting their own industrial empires by walking through some of my problems and offering a few recommendations. 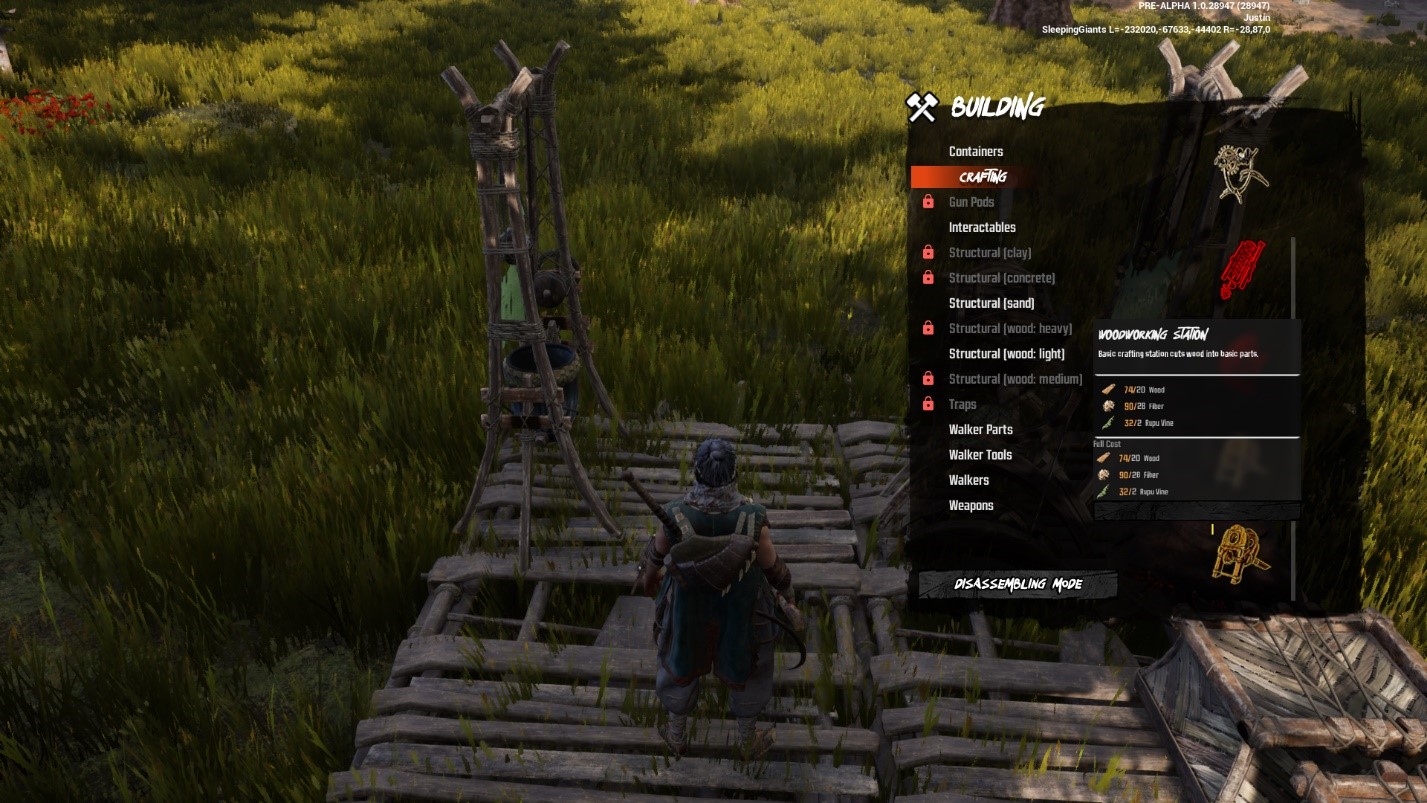 My mistake wasted a lot of higher quality resources and set me back a lot more than I would have liked.

The very first mistake I made in the game was not understanding the difference between unlocking recipes with fragments and advancing my crafting.  I’ve harvested tons of resources since the game started and farmed a metric ton of fragments.  At this point, I’ve unlocked nearly every recipe that can be unlocked without tablets, but I also really messed up.

Like most, I created my dinghy and a deployable base to operate out of it.  I’ve actually crafted several and have them deployed around the region in case I get ganked and lose one.  My problem is that none of them had workstations of any quality, and I needlessly burned through stacks upon stacks of quality materials for no reason.

My confusion started while I was unlocking new recipes using fragments.  I saw the harvesting level listed for more advanced gear and thought that was what I needed to harvest higher quality materials.  That’s not quite true. 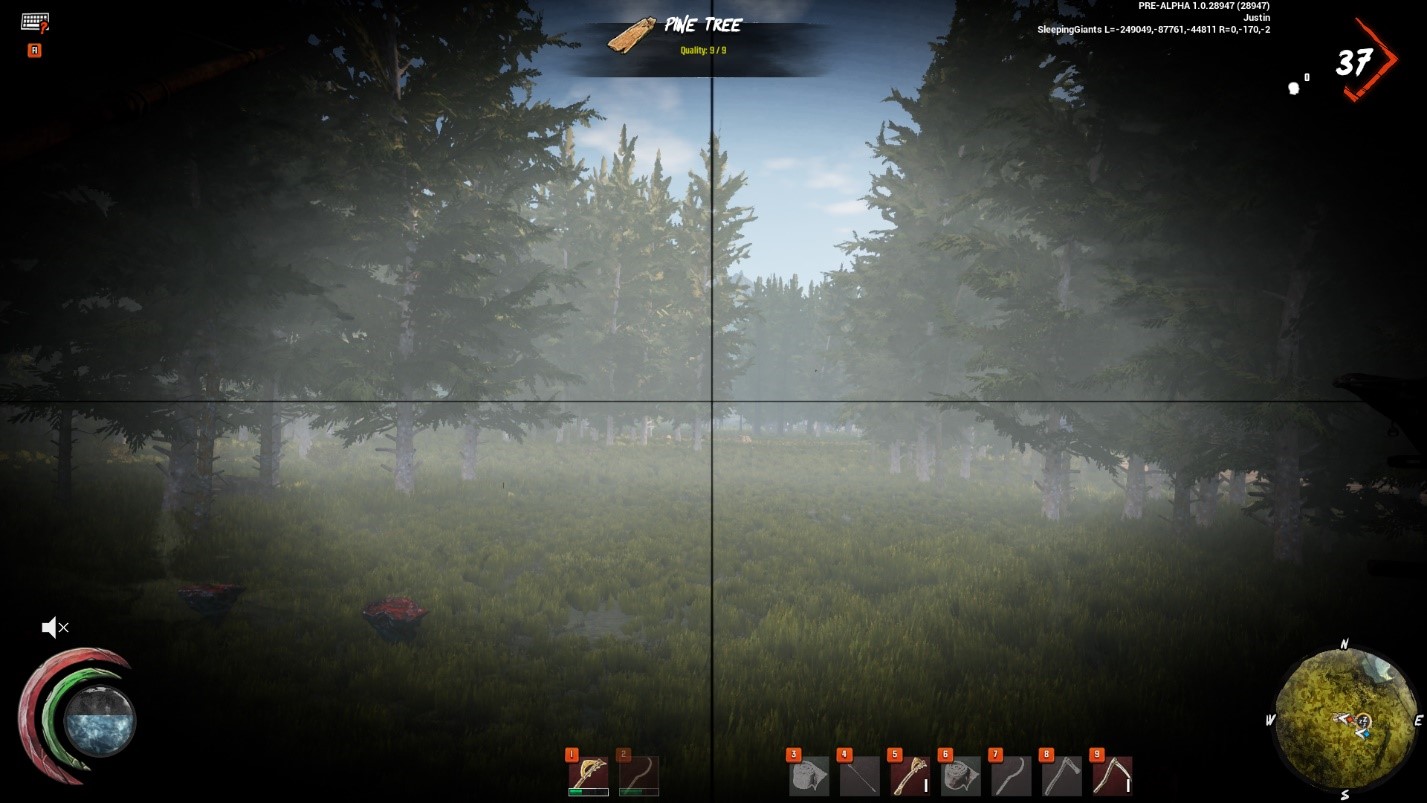 Resources usually come in batches, so find one and there’ll be more of similar quality around it.

With all gear of basic quality, you can only harvest common or quality 1 material, no matter how high the quality of the source node happens to be.  It gets a little worse, though.  You either have to get really lucky, which I did and then hosed myself by not taking advantage of it, or you have to know a few tricks to get past that quality 1 barrier.

Your crafting quality takes off rapidly at this point, because after alternating between woodworking station and hatchet a couple times to get the quality up a couple levels, you can harvest up to quality 40 wood, which leap-frogs the rest of your stations and crafting tools, allowing you to quickly craft or harvest up to quality 40 in everything.

As you can already tell, just understanding that very first jump into quality crafting completely unlocks a whole new world for those of us who are industrially inclined.  There are a few more tips that’ll help you harvest better, faster, strong.

One of the first things I’d recommend is to just skip building much of a base initially.  Get your crafting gear up to at least quality 1, but you’ll probably find yourself running around with tools over quality 10 before you get back around to worrying about a base anyway.  Instead, just craft and then disassemble crafting stations as you go.  You’ll burn through stations so fast at first that there’s just no reason to even pack them.

That brings us to the second tip, which is that you can use the building of your crafting station as a way to attain the higher quality materials you didn’t have otherwise.  With a ton of quality 40 wood and common rupu vine, you can easily make quality 20 rupu vine by crafting a handful of quality 20 woodworking stations and then disassembling them.  This returns material at the same quality of the deconstructed station, hence wood and rupu vine of quality 20. 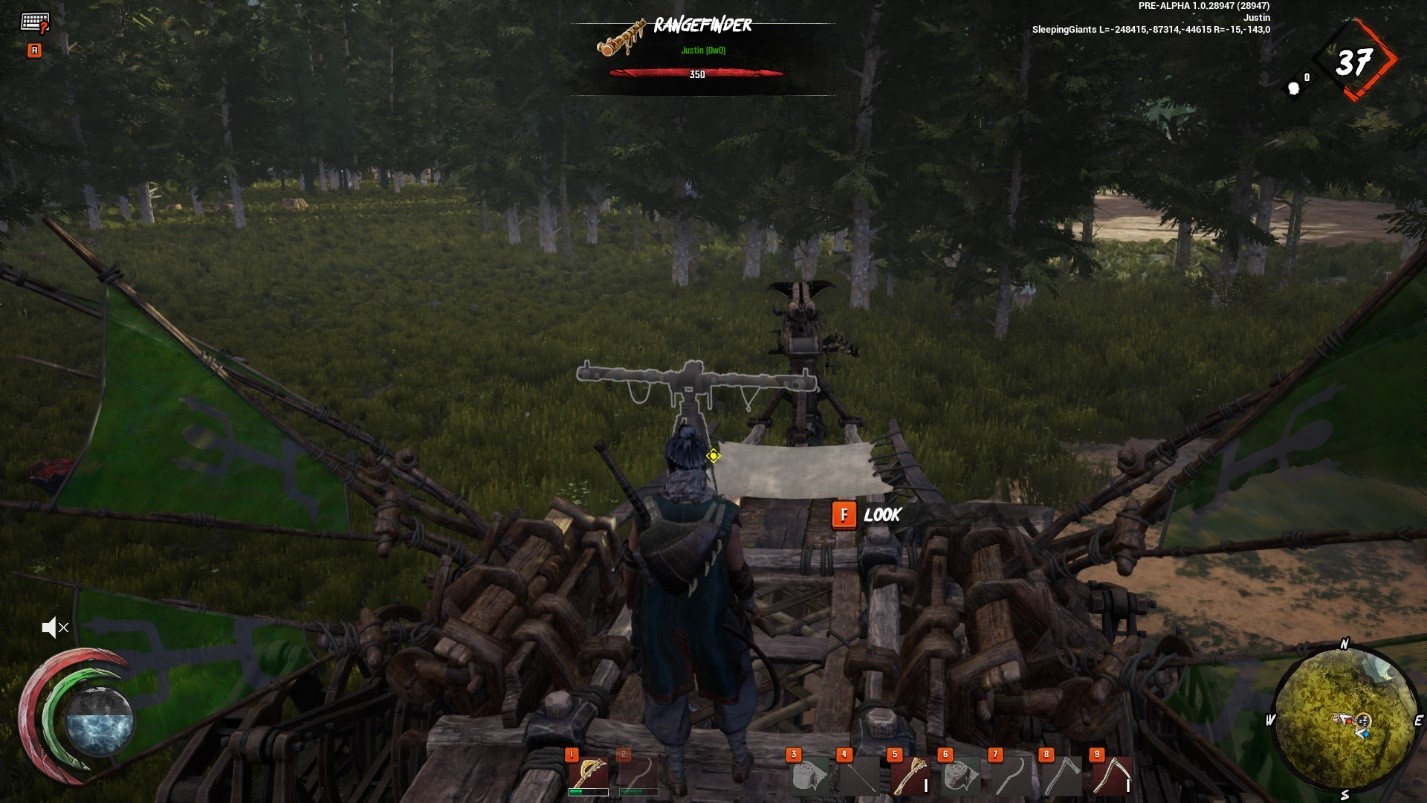 The range finder will be your best friend, allowing you to spot key resources at a distance.

So, craft two woodworking stations with normal vine and quality 40 wood, deconstruct them both, and you now have two quality 20 rupu vine that suddenly will allow you to create a third quality 30 woodworking station.  Just be sure to create and then deconstruct both of the initial stations at the same time.  Otherwise, deconstructing one and then creating another will re-use the higher quality rupu vine you just created.  Alternatively, you can just keep your superior materials in your walker until they’re needed in order to prevent accidentally using them.  This is a handy trick for when you have an excess of one higher-quality resource and need another.

Another way to sort of create quality is to use lesser quality resources in a higher quality crafting station, which will yield results of quality averaged between the two.  This can be an easy way to turn junk cattails into higher quality fiber.  There are plenty of other similar examples, especially using higher quality stompers.

Another tip is to unlock and build a range finder as soon as possible.  The range finder will allow you to see the quality of harvestable resources from a distance, rather than forcing you to just get lucky while walking past them.  There’s a bug and it doesn’t seem to work on fiber right now, but the range finder does work on trees and rocks.  Find a hill and spend a little time looking through the finder for higher quality resources in order to greatly increase the efficiency of your gathering.

Also, make a note of where you find a resource.  After harvesting, the resource will respawn later with the same quality potential.  Making notes of where specific resources are on one or two of your favorite maps will dramatically improve your crafting efficiency.  In a pinch, you can craft a wall or foundation near the resource to remind you to pass by the area, but that runs the risk of preventing the resource spawning and can clutter the map if it’s a larger clan.  Notes are a better option, I think. 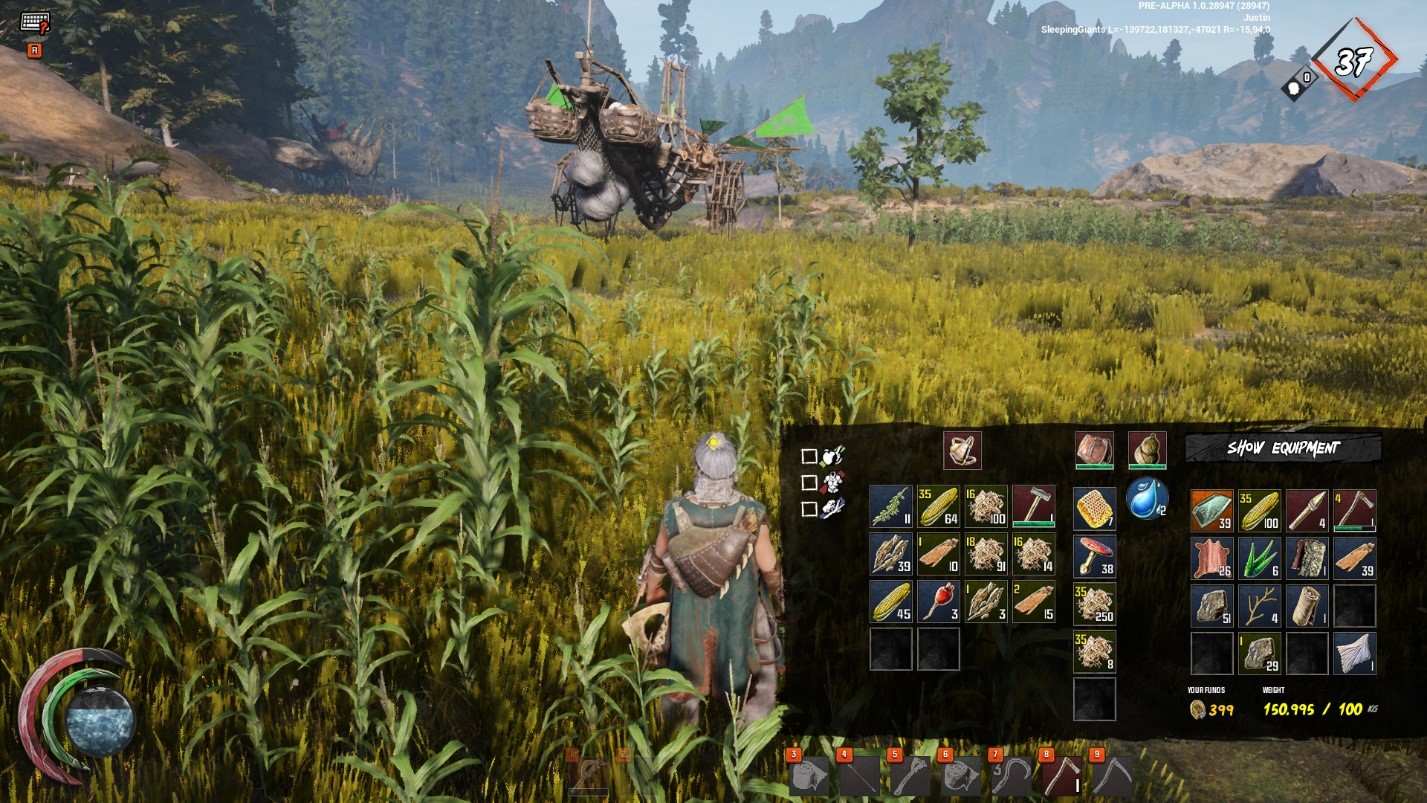 I stumbled across this quality 39 corn patch, which also yielded roughly 500 fiber of quality 39, which allowed me to make a huge quality jump in gear almost immediately.

Hopefully, this helps some of my fellow crafters get a little more out of the game.  I played for weeks, though not very consistently, before I figured out how quality worked.  Even then, it was a conversation with a clan member that helped me get over that initial hurdle.

There’s a part of me that really likes this system specifically because it’s not obvious.  Not understanding quality won’t really hurt anyone and they’ll go through the game crafting perfectly functional gear.  It’s an edge, but it’s a subtle one.  I’ll have to look into precisely how much difference it makes, but lighter armor that’s already a tiny fraction of your encumbrance or that slows you down 1-2% less doesn’t matter that much.  Though, an edge is an edge and I am glad that some of you now have an opportunity to open that edge up for your own clans.

This is just scratching the surface of crafting in Last Oasis, and that’s one of the reasons I’m enjoying this game so much.  Even with just crafting, there are plenty more tips and tricks to be found.  Let me know a few of those you’ve uncovered below.  Yeah, you might be helping an opponent, but you’ll be helping them to enjoy the game more.  That aids in a healthy game, and I’d say that’s always something worth supporting.