The side-scrolling game types aren’t really my favorites.  It’s a common design choice for indie projects, and I’ve definitely seen it done well many times.  Despite those successful applications, I’ve just never really gotten into it, though.  In fact, you might even say that it’s a testament to how great some of these games that I’ve recommended over the years actually are that they overcame my aversion to the side-scroller.

Well, add another one to the list, kids.  Warpzone Studios has developed a really cool game that reminds me a little of Craft the World, but with some really fascinating differences.  One of the more interesting innovations was the inclusion of a “overworld” with additional dynamic content.  In that sense, there are also certainly some echoes of Dwarf Fortress but not to the degree that the game is inapproachable by newer players.

I really found myself liking Hammerting a whole lot, but there are a few rough edges that we need to talk about as we explore what I did like about the game.  Let’s work our way through this seriously cool new title and I’ll see if the excitement is infectious, despite a couple minor warnings.  If you like dwarves or if you’re a fan of colony building games, this is definitely a game you’ll want to know a little more about, so let’s get to it.

Hammerting just released into Early Access on Steam and Warpzone Studios is a small operation, so I don’t think anyone should go in expecting Triple-A efforts here.  That’s a relatively important point, because that developer context really makes this a far more impressive project.

Graphically, I feel the game’s very pretty.  It’s got a great whimsical art design and color scheme that transforms the underground environment into something far more attractive than you would expect.  While playing the game, I constantly found myself stumbling across small scenes underground that evoked a fantastic sense of wonder and appreciation for subterranean beauty. 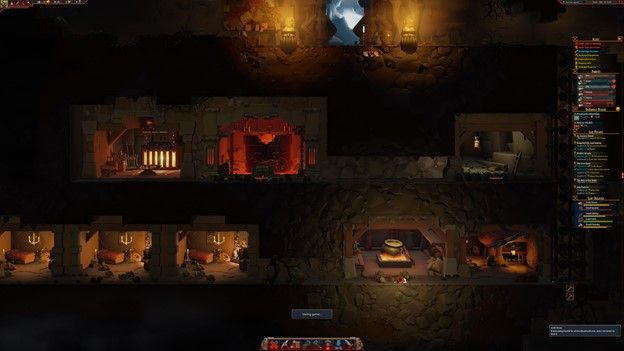 Hammerting plays similarly to other side-scrolling colony builder games, starting small and then opening up as the player unlocks new technologies over time.

I’d say that Hammerting does more to express the wonder of underground environments than any other game that comes to mind.  I’m trying hard to think of another game that does it well, and while there are plenty that do, I just can’t think of any that do it this well.  Even more impressive is that much of those rocky vistas are dynamically generated.   Not all, though.  There are certainly enough sculpted scenes (natural grottos, ancient tombs, holy fountains, and such) that are incredibly well executed and that fit very nicely into the rest of the dynamically generated terrain.

The music in the game was something I liked, but it needs to be dramatically expanded at a minimum.  There were moments where the piano was supported by a heavy swell of strings and I felt like the music began to rise to a level that might match the environment, but it always dropped back off and left me wanting more.

That desire for just a little something more is definitive of this score, to my mind.  It’s there and not overly simplistic, but it just doesn’t fit the quality that the scenery seems to demand of it.  More importantly, as much as I generally enjoyed what I heard, it just didn’t feel dwarven to me.  It’s pretty, but just not particularly on point thematically.  There’s also just not enough of it in total.  There may be multiple tracks, but it really sounded more like a single track with some transitions.

I didn’t feel the score was dynamic enough to identify distinct tracks, though I did note several changes in motif.  Even with that, there still didn’t seem to be any activity-driven feedback to the track, so my dwarves being attacked or even falling in combat had no impact on the music I was hearing in the background.  This is a missed opportunity that I’m hoping the devs address as they move forward.

The environmental sound design on the other hand fit very well.  Easily rising to meet the visual design, I have to tip my hat to the whoever created the ambiance.  It’s possible it was just a pack the team picked up from somewhere and integrated into the game, but it was very well chosen, if so.  The drips and echo-y cavern background sounds add a distinctive layer to the game that complimented the visuals very well.  It’s a simple thing and almost trivial, but where sound and visuals marry, you have something much better than the sum of its parts. 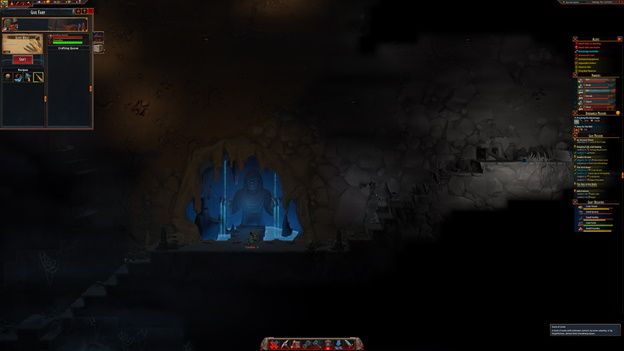 Monster lairs and other features are added randomly to each dynamically generated world, further randomizing the available economy in each game.

There are some minor issues that take away from the game in tiny ways.  I thought that the UI design was certainly functional from an informational standpoint and seemed to work well enough in general, there were still some issues with flow and missing functionality.  To be clear, nothing ever failed to work and I ran into no bugs, but there were features that were missing and I really found myself struggling with those gaps.

For instance, I had a really hard time figuring out where the inventory was in the UI.  In hindsight, it’s obvious that it’s there on the character sheet, but I had thought from reading the tutorial that there was some other sort intentory sheet UI that I just couldn’t find.  I also didn’t like that I had to tell my dwarves to go upgrade gear individually, rather than them just automatically picking up upgraded gear as it was created.

I can see some reasons for why you might not want that, but when I had a ton of trouble finding the crafted gear amid the ground clutter and ordering my dwarves to equip it, that became a very frustrating feature gap.  It also dovetails with other quality of life issues that I felt were missing, such as not being able to better orchestrate work. 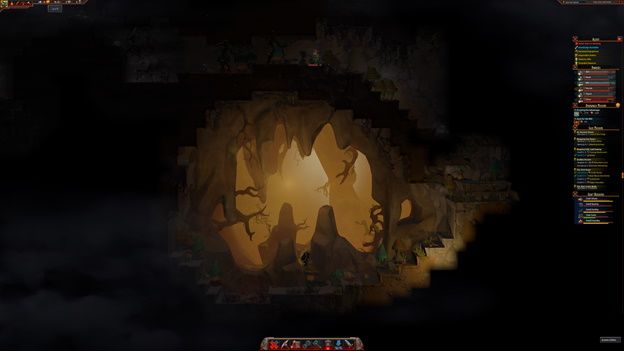 Hidden grottos and similar features inject a bit of artistic effort into the otherwise dynamic game, and do so to great effect.

These colony builder games are all about controlling who works on what and when, but the issue I had with Hammerting was that I only have off/on controls for work.  I couldn’t prioritize work for certain dwarves, giving them alternative assignments when those jobs were done or not needed.  That lack of control was really frustrating for me, especially when that secondary job needed to be transport related.

That’s the other big problem I had with the game.  I get that things fall on the ground and I have no issue with that, but it was so hard to get anything delivered with any sort of intent.  You had to hope a hauler at some point selected that particular demand to address.  That meant completed orders remained unfulfilled far longer than they should have.  It also ends up giving the game an unintentional ant-farm feel, and not really in that satisfying way.

If Warpzone addressed no other issues, I’d encourage them to update their control system.  Good ideas, just with some slightly flawed usability that deprives the game of getting top marks.  If you’re a fan of these sorts of games and don’t mind rough edges, it’s not enough of an issue to cripple the title, but it does create some minor frustration. 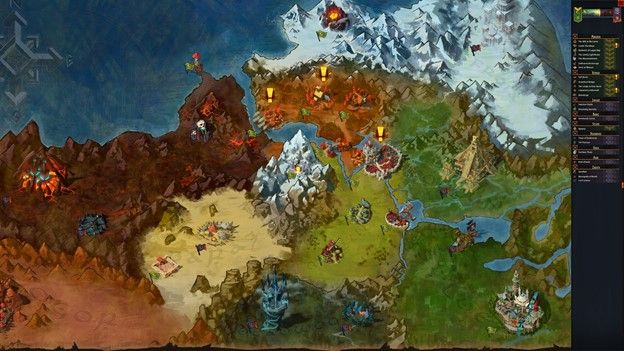 The overworld offers a great deal of potential that other similar games lack through the addition of extra dynamic content and a meta-campaign that the player supports through their dwarven colony.

In the end, Hammerting is a super cool game with some serious potential.  I don’t know that it’s quite there yet, but what is there will make some folks really happy.

If you’re the sort of person that really enjoys a very relaxed colony builder with a gorgeous palette and dwarves, then this game is right up your alley.  I feel like it could be a breakaway hit in the very near future with just some minor tweaks, though.

For one, the overworld concept is outstanding because it builds this external context to the colony that both creates a dynamic story for the game’s backdrop and acts as a really great economic tool for sourcing goods from the colony and providing a really important fictional consumer for excess goods.  It just needs a little work to make it more dynamic, such as making the nature of the missions you get from various towns a little more varied and perhaps add a more complex political layer.

I’d love some sort of faction element where my dwarves competed against other dwarven clans to supply and support multiple factions as they worked their way across the map in a tide of conquest.  If nothing else, I’d like to see the mission system be just a touch more dynamic in types of goods requested and in which communities ask for the goods.  As it stands, it’s a hint towards a future system that may be more complex and if they get that in, it’ll compliment the game in all the right ways.

Unlike my normal caveated recommendation, I wanted to recommend this one straight up.  Unfortunately, it looks like the demo I was going to brag on was only a short-term thing.  I hope they bring it back and do recommend that you follow the project if you’re remotely interested in it for when they do.

Otherwise, I think it was worth the $25 I paid for the game and I expect Hammerting to continue getting better over time.  That said, I do still have to add the caveat due to the temporal nature of the demo.  This is an early access game and there are aspects of it that have clearly not been developed to a release state yet.   If you’re bothered by minor frustrations like that, then you should probably give the game a pass.

On the other hand, if you’re willing to look past that sort of thing, you may find you enjoy Hammerting.  There’s a lot of well-executed subtly here that I won’t ruin for anyone, but that I do think some readers will really enjoy.  I certainly have, though I hope desperately that they find a composer who can score the game to the degree that it deserves.

Until then, I’ll bid you adieu.  There is a hole which demands to be diggy’ed and I’m just the guy for the job.