Throughout 2020 one of the things I struggled with was my waning desire to play Guild Wars 2. I’ve been playing it since the betas before it launched eight years ago, so it isn’t surprising I would experience some lulls. Truthfully, this isn’t the first lull I’ve experienced with it; anyone want to put up some signs for refugees? Anyone? This time around, though, it felt different and was the most profound lull I’ve experienced in a long time. Thankfully, over the last few months, things have come around for me, and I’m looking forward to playing nearly every day. Let’s look back at the previous few months to see how I’ve rediscovered what makes Guild Wars 2 a great game.

My resurgence with GW2 started with Wintersday. I did have some fun with the Champions update we got in November, but it didn’t rekindle my desire to log in very often. I played through it and had fun but wasn’t motivated to do more. Wintersday was different this year. I didn’t get to play every day, but I wanted to. I looked forward to doing the race, choir bells, the jumping puzzle, and even doing the Infinirarium. All of Wintersday was a blast, and it was the first glimpse of me still having the capacity to enjoy playing GW2. 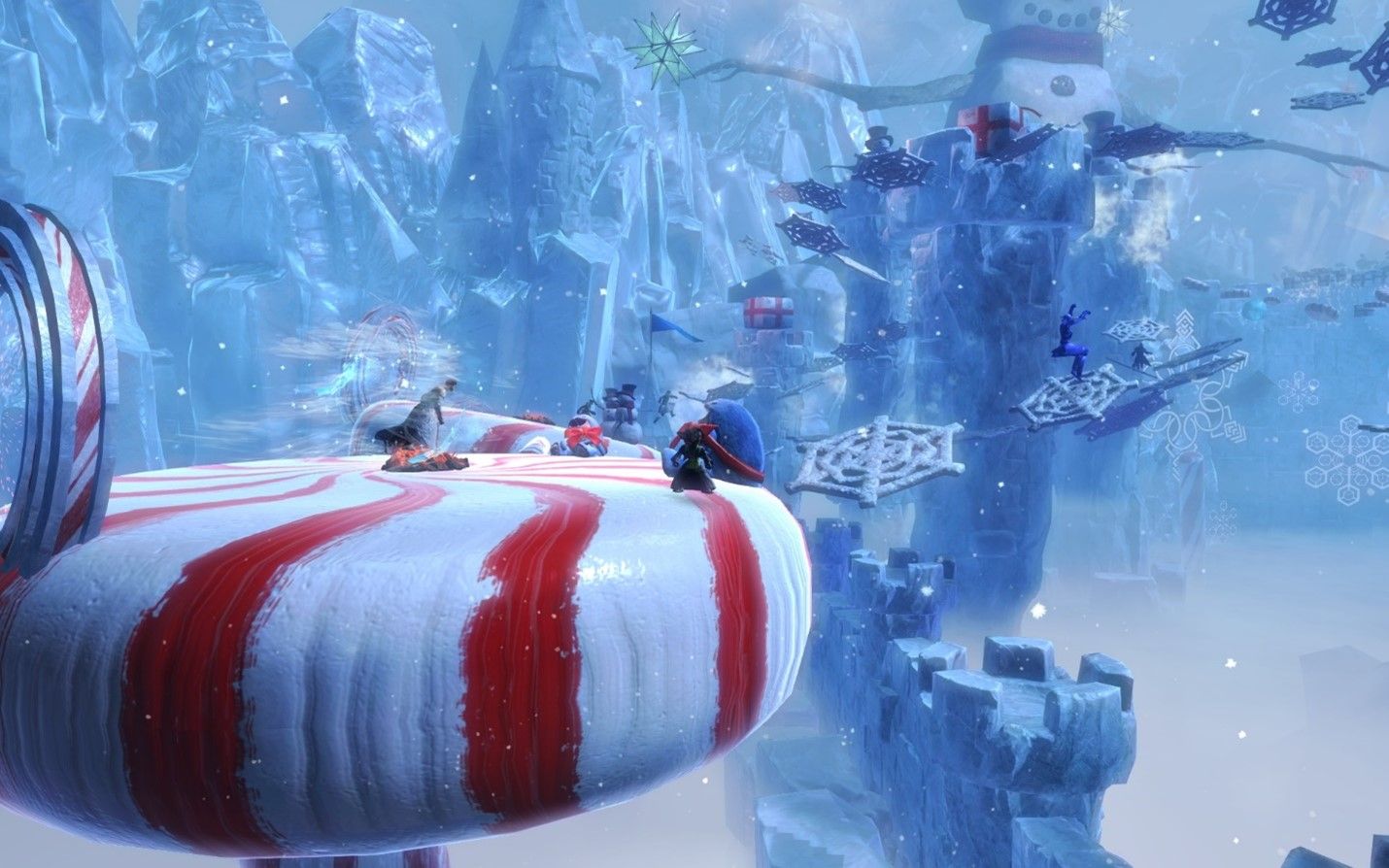 Then near the end of January, the “Power” chapter of the Champions episode was released, and it just continued my reawakening. The flow of this chapter felt like it was well-paced, and I enjoyed the DRMs we got with it. This is where I started occasionally logging on to do the daily DRMs and participated in the efforts with the allied factions. I was also pleasantly surprised to see that I could easily earn enough Tyrian Defense Seals to catch up on all the emissary rewards I had missed out on through doing the daily DRM missions. This meant that I didn’t feel hopelessly behind and like there was no possible way I could catch up. I could do a little bit whenever I had time, and I could make meaningful progress. However, I still wasn’t logging in most days.

If Wintersday got the ball rolling, then Lunar New Year gave it a good kick in the pants. I’ve never really done much with Lunar New Year, and I’ve never bothered with the envelope meta for earning gold before. However, I had realized I was extremely close to finishing my Howler, and I needed 100g so I could buy the Icy Runestones for it. Therefore, Lunar New Year seemed well-timed to make some extra gold easily; but I was determined to stick to my ideal of “if the activity isn’t fun, I’ll stop.” Surprisingly enough, the actual activities were a ton of fun, especially the race and the Celestial Challenge. I logged in most days for no reason other than to do those. 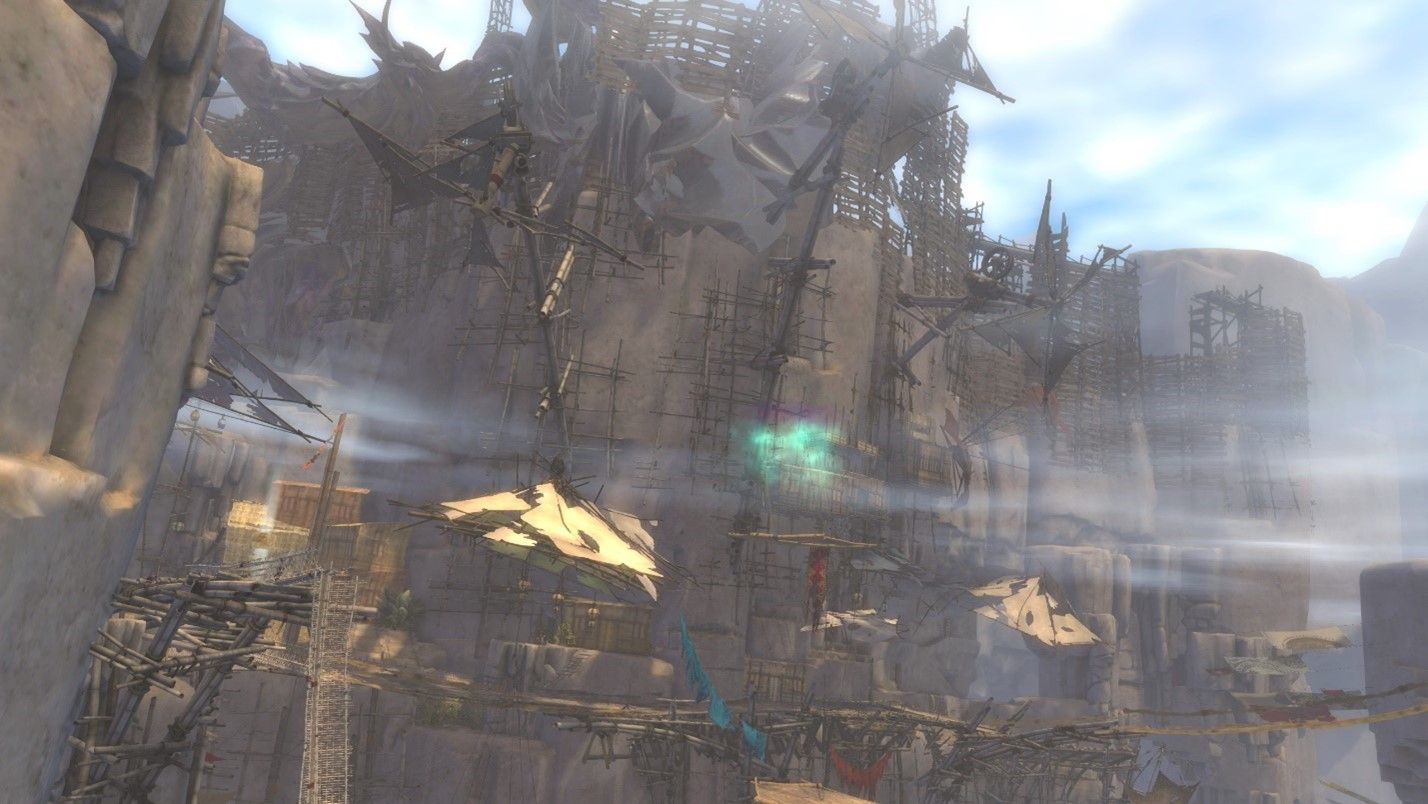 What was even more surprising, I enjoyed doing the Lunar New Year gold meta. The way this meta works is you take all your envelopes from Lunar New Year, take them to SIlverwastes, and do an entire meta event clear (from capturing and holding the bases through the end of Vinewrath). After clearing out Vinewrath, you’ll have a large magic find bonus. With this giant magic find bonus is when you want to open your stockpile of envelopes. I always liked SIlverwastes, but I got burned out on it before Heart of Thorns, so I hadn’t been back in a while. I had a ridiculous amount of fun when I could find groups working on it. I was also lucky and got into most groups at the start of the meta event. Additionally, I had forgotten entirely about the Nightmare Maze that opens up at the end of vinewrath and was an absolute blast to take part in.

Lunar New Year helped me get the gold I needed to finish my Howler finally, except I discovered I needed a high-level Leatherworker to make the wolf statue. I had assumed it would be Huntsman like it was for The Dreamer, so this was a bit of a rude realization. I found myself needing to level Leatherworking from basically scratch, as my one leatherworker was at skill level 50. Although I’ve always liked the crafting system in GW2, I liked it primarily because of the discovery system. Leveling expediency isn’t generally a perk of it, though. 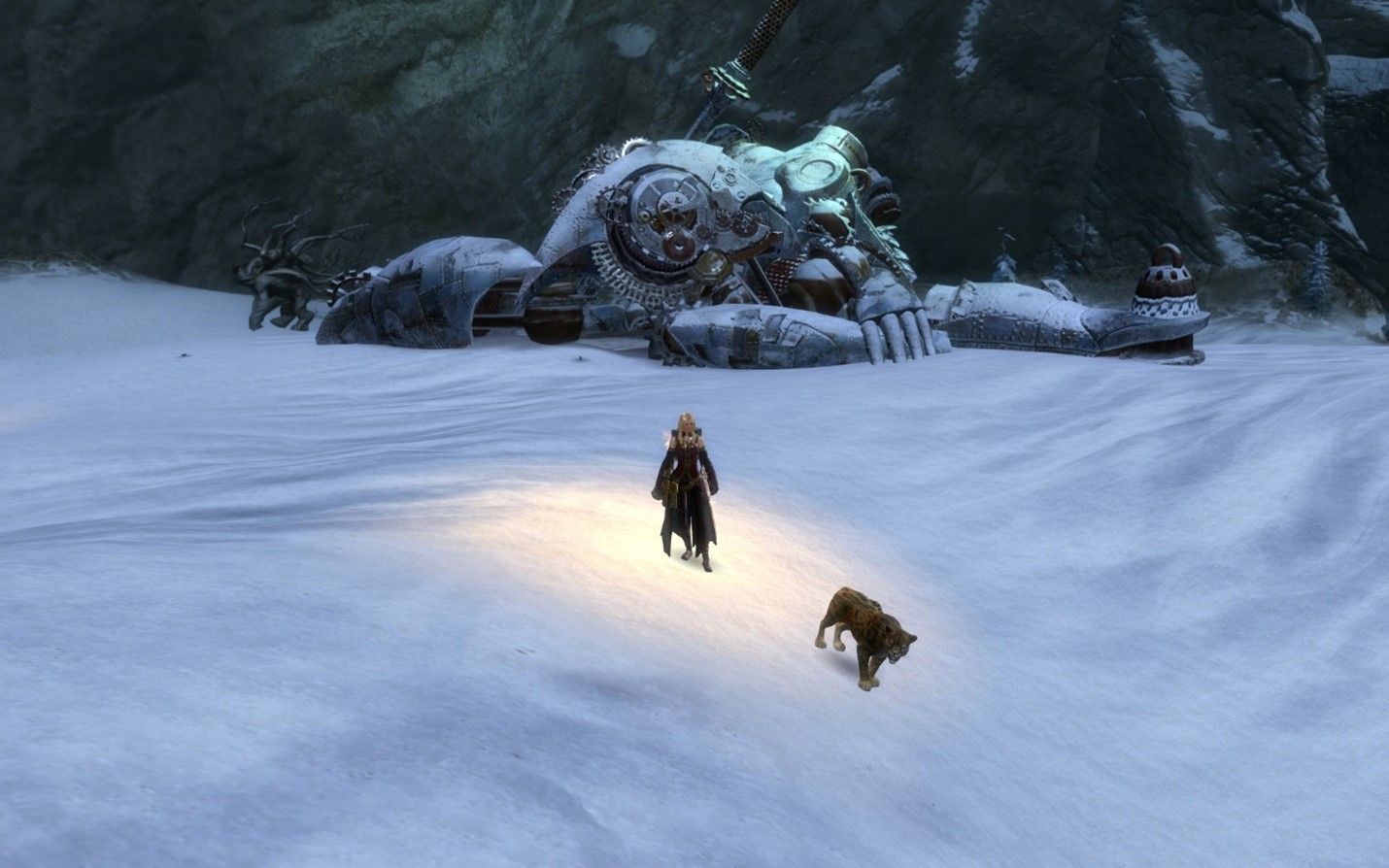 So it was with some feeling of trepidation and foreboding that I set about looking for a way to level Leatherworking quickly. Thankfully I found GW2 Crafts quickly, and it is a fantastic tool for helping to fast leveling crafts and helped reduced gold costs from buying materials. Using this site, I was able to finish leveling Leatherworking and finally craft my Howler quickly. I also used it to level my Weaponsmith now that I am working on The Shining Blade. My only complaint is I wish there were a way to add in things like item boosters to adjust the amounts of things needed to craft. I highly recommend it for leveling crafting as it was a huge help.

Since Lunar New Year ended, I have been logging on nearly every day and do the daily Dragon Response Missions and the old dailies in the core maps, and I have been having a blast doing both. Initially, I hadn’t noticed the mastery points in the DRMs, so going back and getting those has been great. Some of the mastery points are obvious and easy to get to, while others took a little bit of time.  I will say, though, if you are doing a DRM on public, please wait until after it is completed to get the mastery points, especially if it isn’t one right on the main path. Doing the old dailies has also been a lot of fun because I’m revisiting old areas I haven’t seen in a while. It’s like a trip down memory lane with a bonus of 2 gold a day. 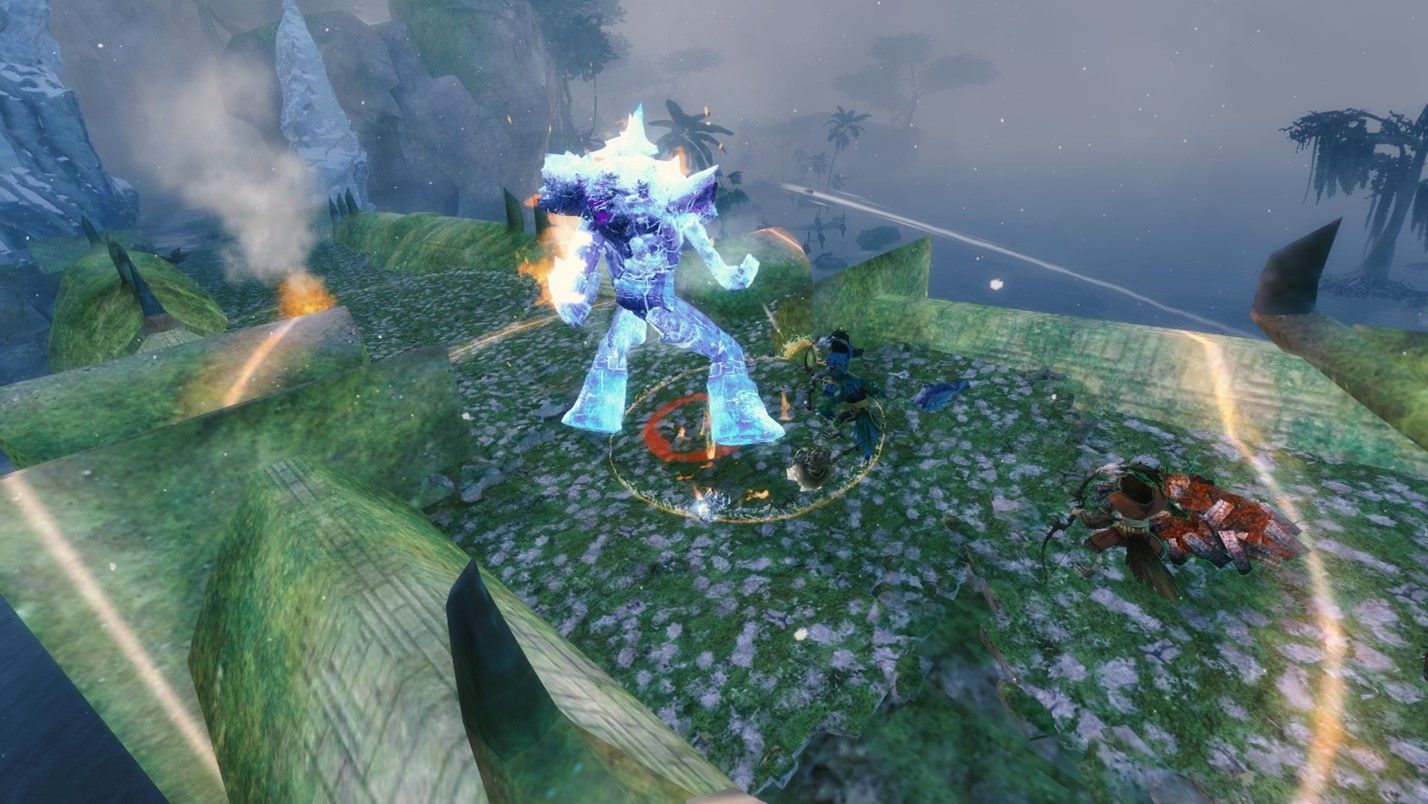 All of this brings me to the true strength of GW2. Not only are there a ton of different things to do, but there’s also a ton of different ways to accomplish most tasks. As I mentioned before, I am currently working on The Shining Blade Legendary. Part of completing that is map completion in either Heart of Thorns maps or Path of Fire maps. Even though all I have left in HoT is Dragonstand, completing that map can be particularly painful because it hinges on completing the meta event. So, I decided to go with PoF maps because it’s been a long time since I spent time in those maps. It’s been an absolute joy so far. Just wandering around and figuring how to get to everything and collecting all the mastery points I hadn’t bothered with have been highly entertaining. I’ve found quite a few areas I had never encountered before, which is kind of astonishing.

Having the freedom to play in different areas and participating in various types of content to complete goals helps keep things from getting stale. If something starts to be boring or feels like a grind, I can pivot to something else and still progress on my goals. Not only this, but even if I only have an hour to play, I can still do a few things and still feel like I’ve made meaningful progress towards completing my various projects. It also doesn’t matter that I’ve waited so long to do these things. Maps and various events might not have the population support they did right after expansion launches, but there are still enough people around, and a lot of things can be completed alone. Pretty much the only thing standing in the way of my enjoyment of Guild Wars 2 was myself. Now, I look forward to logging on and making progress on something every day.