Good news, everyone. I’m still going strong in my return to EverQuest II. This means we’re back with another episode of the Norrathian Stride!

Last time I left off, I had just hit level 32 and I had already dabbled inside the seemingly infamous Agnostic Dungeons. I had said I would try to avoid them - and I really did try my best, but good grief is leveling slow simply following the questing timelines. I hit level 40 and went about my way, grinding the quest lines throughout the Steamfont Mountains, Lavastorm, and The Sinking Sands. After about 15 hours, I was level 53 and kinda burnt out from the quest line constant fetch chains.

At this point, I decided to actually work on crafting for some reason. I have no idea why, but I did. Crafting is actually considerably better than I remember being, because you can do the tutorial chain to level 10, and there are quest lines that take you upwards through level 35 or so, supplementing daily tinkering/adorning/transmuting tasks to help keep myself in line without actually having to craft recipes to grind. That part is kind of nice, though at level 38 I’m now finding myself done with everything I can do quest wise and I’m pumping the brakes - opting to just hit the daily three tasks and keep working on leveling up.

I did this for about three hours before going back on the grind and spending another 25 hours or so going through the quest lines in Loping Plains, Barren Sky, Bonemire, and Fens of Nathsar, before dropping out around level 72. For the ol’ S&G’s, I decided to jump back into an Agnostic Dungeon after reading a thread on Reddit that suggested The Crypt of Agony is the most efficient dungeon for experience versus time invested. I went ahead and popped in, pulling the entire zone in sections as I ran through to each named boss and stopped when I would inevitably get stunned or rooted (I’m an Illusionist so my defensive capabilities are pretty weak) and I would help my pet and my merc smash the packs of enemies to thin the numbers so I could run and grab more. I was clearing the dungeon in less than 15 minutes per run, averaging some decent coin and a boat load of exp and AA points in the process. It was repetitive, but profitable, and it kept me geared up and gave me plenty of Adept and Master level spells. This was considerably faster than the bloated quest chains that would formerly level active players up in these areas.

I stopped once again around level 85 and went off to check out The Great Divide timeline, but after completing most of it and only getting to level 87, I decided I wanted to do something I’d used to do for fun on alts in the original EverQuest that I hadn’t yet done in EverQuest II: I wanted to get my class Epic weapon. I ran back to the Fens and started my epic quest, the Mirage Star. After a few hours, I was able to finish the quest with just myself and my mercenary. The weapon was far weaker than what I was currently using, but it was fun to simply say that I’d gotten it. I’m going to see if I can get my guild to help me do the raid stuff so I can get the stronger version just for fun. 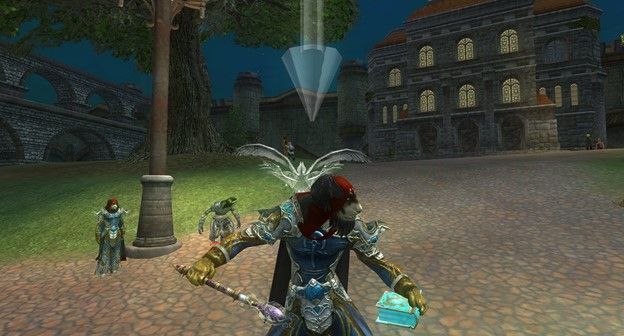 Once my Epic was done, I went back to the dungeon and stayed there until level 95 and around 302 or so AA. I know, I probably should have stayed at level 94 and capped my AA, but I got bored so I leveled so I could go check out the Shattered Sea line in the Tranquil Sea. It was really challenging at first, but once I got geared up with level 95 gear, the challenge became far less than it was before. Still, it’s more interesting than some of the older lines - but it’s still by and large the same type of experience. Kill x mobs, gather items, etc. I know, it sounds like I simply don’t like the gameplay loop, and maybe that’s the problem. I was never a fan of World of Warcraft’s oversimplification of ‘questing’, because I came up on the original EverQuest’s need to actually pay attention to what people said by repeating key phrases back in question or statement form instead of just spam clicking the speech bubbles to move the dialogue along. I’m hoping that the level 100+ areas show a little more diversity.

I'm currently sitting at 131 hours of EverQuest II played, and I’m still enjoying myself for now. The Overseer mini-game, the research assistant, and the mercenary leveling is a pretty cool way to encourage players to log in once a day/week, but I doubt there’s much staying power without spending money for better agents once the tasks get tougher. My immediate goals are obviously to get to level 120 so I can check out the Reign of Shadows expansion content, but what else should I do? Let me know if there’s something cool that I’m missing out in the comments below!