Why do I play MMOs?

This is a question I’ve asked myself throughout the years as I’ve made MMO coverage my niche, first as a freelancer in this industry, and now full time here at MMORPG the last few years.

For years MMORPGs were something I played, but not something I spent a ton of time really thinking about. I started with RuneScape in high school with some friends, and in college played the old Pirate King Online MMO with a few friends in the computer lab in between classes. But I would never have considered myself an MMORPG player. I just enjoyed these games with my friends. In amongst these games I would spend hours playing games like The Elder Scrolls IV: Oblivion, Call of Duty: Modern Warfare 2 and cut my teeth in multiplayer matches of Civilization IV and Medieval: Total War.

One major barrier of entry for me was the subscription fee. I was a college kid, working a job at just a little above minimum wage at the time, so all my money was going towards school as well as food and transportation to class and work. I remember when I saved up enough money to buy my Xbox 360 when I was 19 – it was August of 2006 and I walked two miles to the nearest GameStop, eager to spend money both my parents were more than a little upset I was spending on games and not my next round of textbooks. For me, $60 was – and still is – a lot for a single game.

At the time, World of Warcraft was the only MMO I was really interested in checking out, but the need to both buy the MMO and then pay a subscription fee on top of it really put me off.

Fast-forward a year, though, and life was much different. I had dropped out of college at that point, content to work at the music store I was at in the hopes that the connections to the music industry here in Vegas it provided would open some doors. As such, I had the extra money and a game I was actually willing to spend the fee to play was coming out – The Lord of the Rings Online.

For me, the jump into my first major MMO, erm…addiction is probably the best word because that’s what it became, the jump into LotRO wasn’t really to do with the multiplayer aspect. For me it was entirely the setting. I was paying a ticket price to see Middle-earth in a way that really hadn’t been done before. 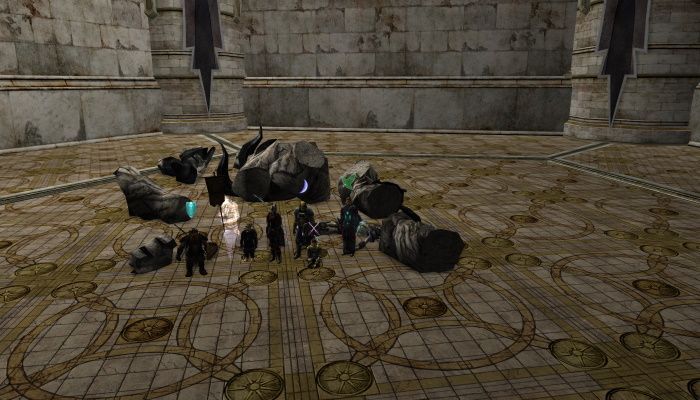 However, the other aspects of what makes MMOs great – the community, the accomplishment of raiding with your friends, triumph in a hard fought PvP battle – these all kept me playing long after I had reached the end of the original installment’s content. These aspects of MMOs fascinated – and still fascinate me. I wanted to explore them more, learning new things from players around me, and sharing the experience of uncovering Middle-earth’s mysteries and lands together.

Community is the big reason why I play MMOs – in fact, the way most MMOs are made now with solo players in mind is something that I’ve warmed up to just realizing that not everyone plays this way anymore, but it also makes me a bit bored when I hop into a new game and I find myself without my core group of friends to keep me motivated.

As such, I typically don’t start a new MMO unless I’m either covering it for the site or I have friends who were joining in and taking the plunge (not that there have been too many new MMOs to try, but you know what I mean).

Years ago when Final Fantasy XIV came out Reborn into what it is now, I was intrigued, but I didn’t know anyone personally who was playing the MMO. All of my friends were still sticking around LotRO or jumping into The Elder Scrolls Online – a game that alongside Lord of the Rings Online literally launched my games writing career.

As I look back on all the MMOs I’ve enjoyed the most over the years, they have one thing in common: Community. My Kinship in The Lord of the Rings Online is still active, 13 years later, and we’re all still incredible friends. Members of my Kin have seen my daughter born, me married and divorced over the years. I’ve watched as friends left the game but kept in touch through Facebook groups and more, I’ve been able to keep tabs on members who have become expats in the last decade, finding their own slice of Middle-earth over the years to make their home. In The Elder Scrolls Online, the friendships I formed in the early days of my covering of that MMO are still the major friendships that define my life – our Saturday variety team is comprised of people that call back to my earliest days covering MMOs in this industry.

For me, the reason I play MMOs is, simply put, the people. What began as a way to hang out with friends virtually after school turned into an avenue that created some of the greatest friendships in my life to this point. The Massively Multiplayer aspect of MMOs simply cannot be replicated, no matter how the definition of the genre continually shifts onto other games over the years. But I know I’m different than many, many people.

So why do you play MMORPGs? Is it the people and sense of community, story, the world around you? Let us know why in the comments below.