When it comes to Halloween, MMOs have always treated us to some banger events, and 2022 looks like it’ll offer us some sweet treats. We’re closing in on the scariest night of the year, so we’ve put together a list of MMOs that have added some spooky delights that will haunt you for the next few weeks. We even found a few of the Not So MMOs that have some tricks up their sleeves. Events are still being announced daily, so let us know of any events we may have missed in the comments below. 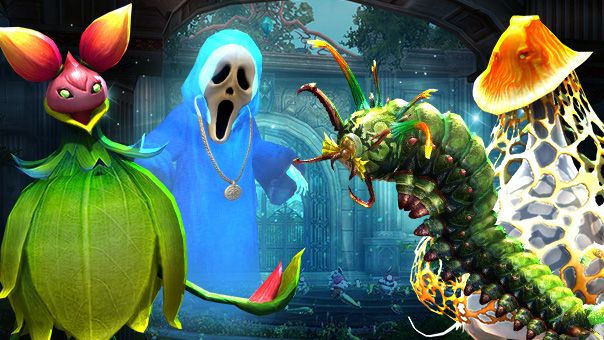 The Pumpkin King is spreading fear and terror once again in the annual Spookily Super Halloween Event. Get an hour’s worth of Bombastic Buffs by clicking on A Nobleman’s Coffin in the main bases in Inggison and Glkmaros, then visit NPCs Esta or Isuta for your daily quest to defeat Pumpkin Kings. Also, be on the lookout for Kabe and his special task that will earn you some extra rewards.

Also running through November 2nd, the Garden of Horrors is the second of Aion’s Halloween events. Available to players level 80+, Greenhaven Garden can be accessed daily by using the portal in the Gelkmaros fortress or Inggison Illusion Fortress (additional entries can be purchased from the Aion Shop). Once you enter the garden, you must defend the plants from waves of pests like the Dukaki Thief and Greenhaven Tenaklu. Each plant you save can be harvested for one (normal mode) or Two (hard mode) Event Pumpkins, which can be turned in for rewards. 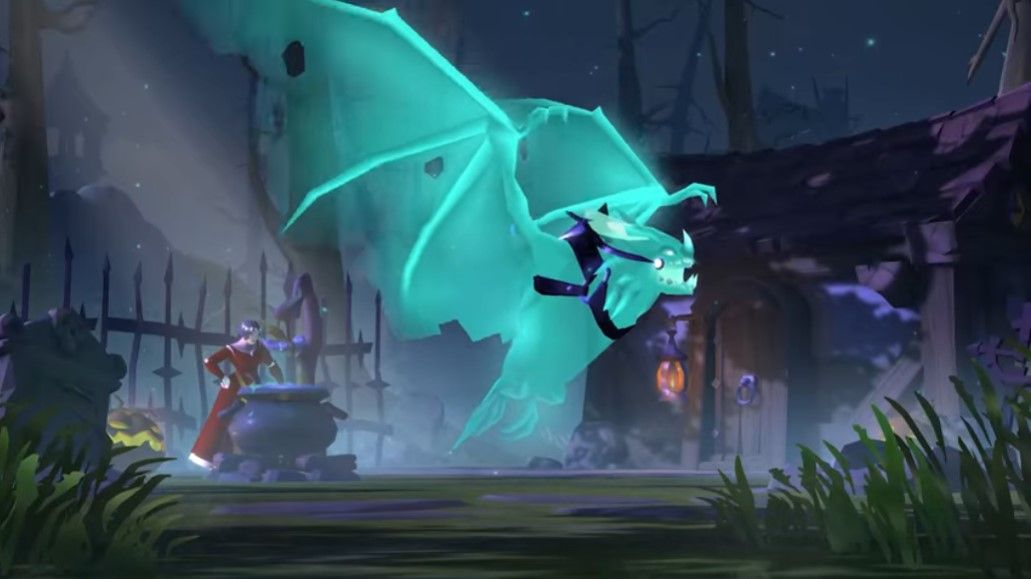 Two Crowns and Solis Headlands are once again turned peaceful to hold the Hallowtide Festival. From now until November 3rd, any character level 10 or higher can complete daily quests in each zone to earn Festival Coins, which can be exchanged for some special treats.

Ashes of Creation - Accord of Autumn

Although players still haven’t been treated to an official launch date, backers can still head to the Ashes of Creation shop to pick up some spooky cosmetic items and special pre-order packages. 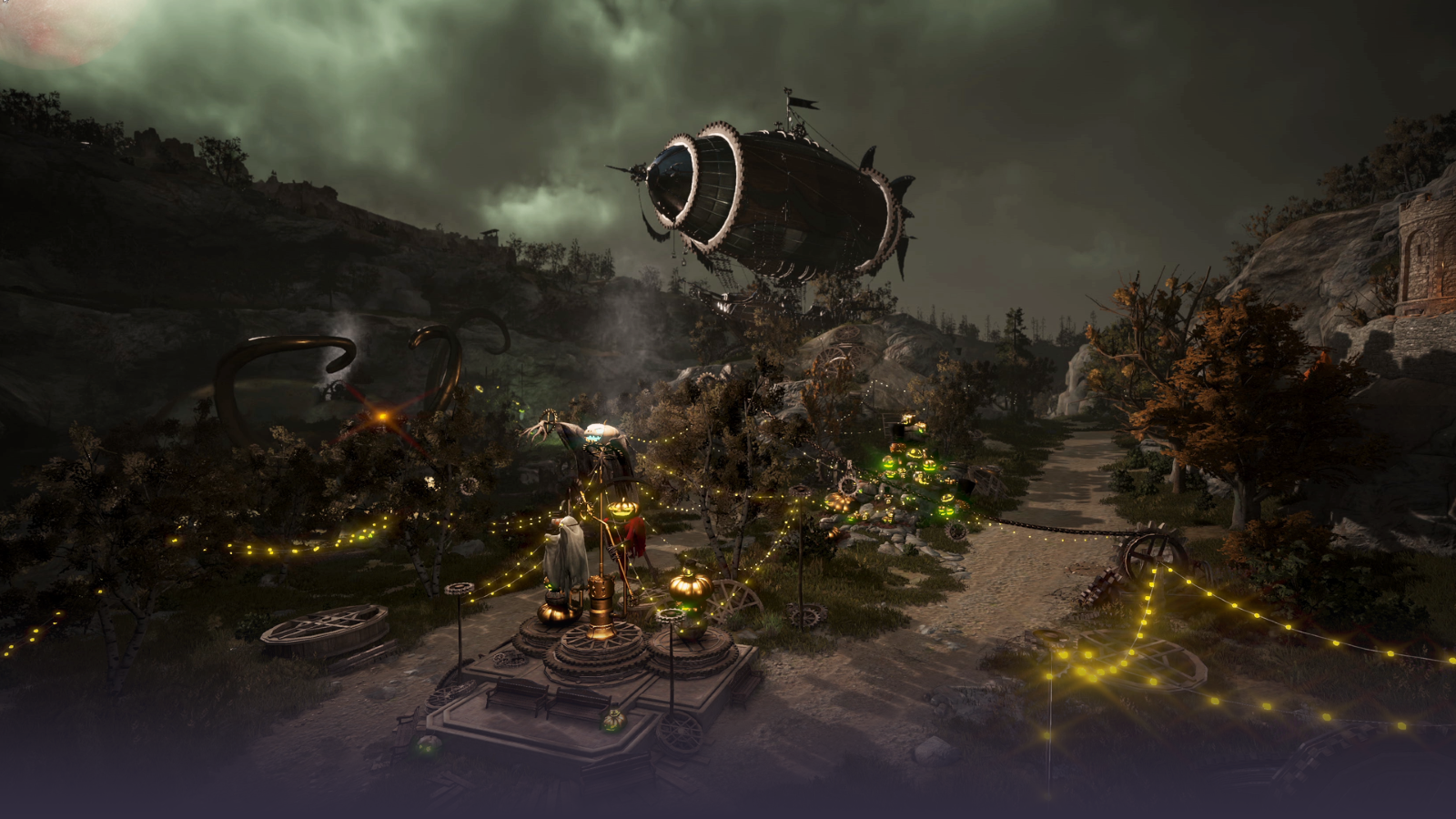 Marni’s Spooky Playground is open and full of special Halloween events. New events will be added periodically until the Playground closes on November 9th, so check back often to get all the treats.

Every year, the Blood Moon rises over Millenium City. Players can earn new titles, the Trick or Treat Inventory Bag each week, and other goodies as they defend the city from zombies, werewolves, and undead heroes. 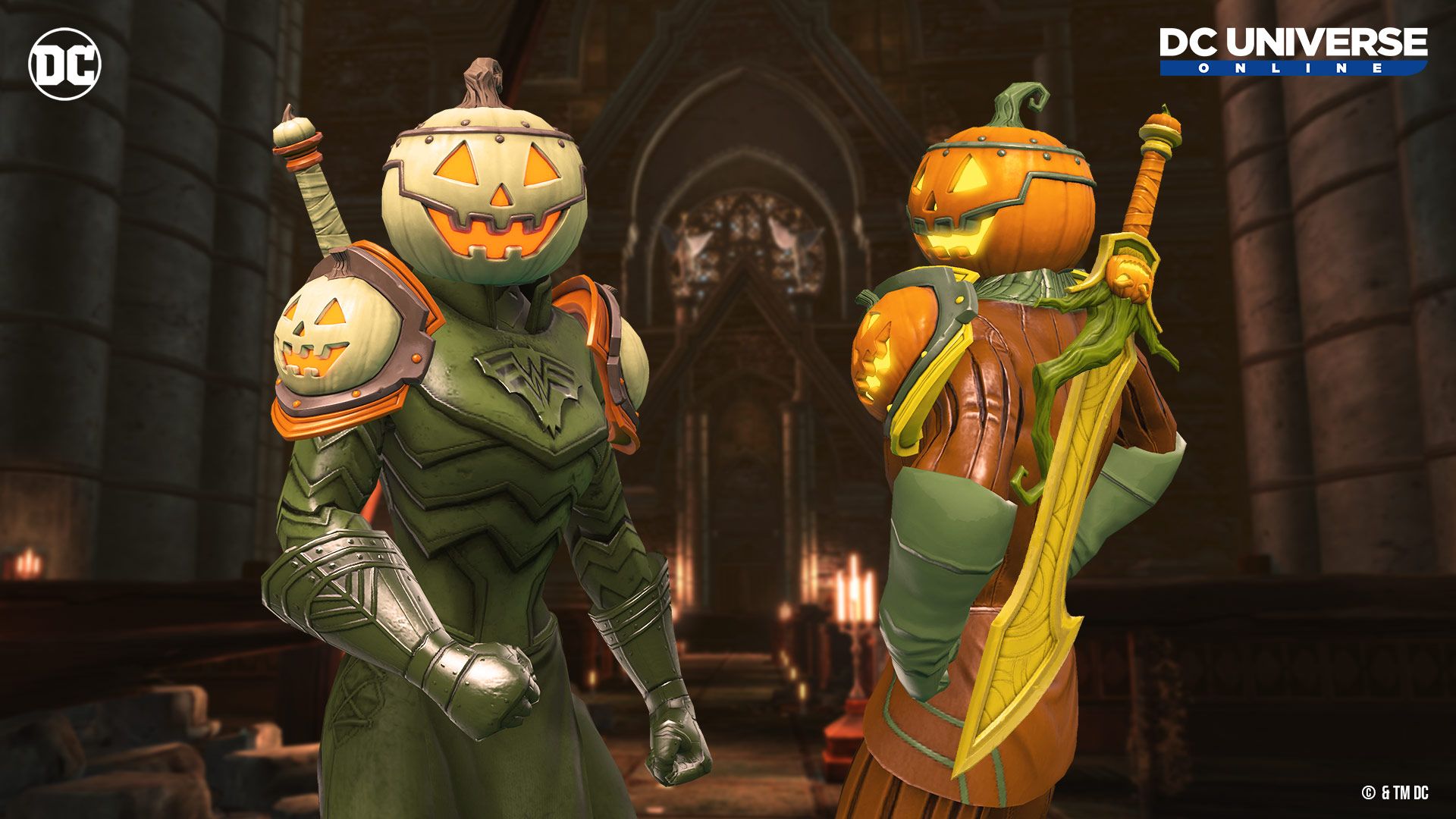 The Witching Hour returns to DC Universe Online, bringing with it new base items, feats, and styles. Speak to the Phantom Stranger (Heroes) at the East End safehouse or  Tala (Villians) at The Tap Room for information about the Midnight Masquerade.

Running now through November 1st, this is the first chance for players to test out the new Archetypes during the annual Night Revels event in Delara’s Graveyard.

Full of XP boosts and special treats, the annual Witches Festival event will run from Thursday, October 20th, through Wednesday, November 2nd. Defeat boss monsters to earn Plunder Skulls along with their regular rewards. These haunted containers hold all sorts of items to collect. As an added bonus, the first kill of each boss type each day rewards a special Dremora Plunder Skull, with a chance to contain Dremora Motif chapters, Festival Writs, treasure maps, and a new Ghastly Visitation memento rune box.

Elsword’s 2022 Halloween event is a strange one. Players will be transported into the new Bounce the Hedgehog event dungeon by clicking the event icon, where they will juggle a hedgehog to earn candy that can be exchanged for awesome rewards. I couldn’t make this stuff up if I tried.

Everquest - Nights of the Dead

Nights of the Dead is back and will run through November 8th. Take on quests Zigan Ribshard, Haunted Jack, Spooky Sally, and others to get your Halloween treats.

Everquest 2 - Nights of the Dead

The EQ and EQ2 Halloween events may share the same name, but rest assured they are entirely different. This year, you have until November 2nd to collect all the new treats, including 11 new house items and equipment, two new costume illusions, a new holiday recipe book, and more.

Head over to Old Gridania and visit with the Adventurers’ Guild Investigator to begin the March of the Mischievous Costume Cortege event. Players will be rewarded for completing the quest chain with the Wake Doctor’s costume set and The Caged Wisp housing decoration.

Take part in the dozens of Harvestmath Festival quests before the event ends on November 2nd. To get started, complete the “Fall Festival Is here!” quest to get your map to the Party Tree, the primary hotspot for the event.

The Night Troupe’s grand festival will be held in Rein this year as part of the Midnight Carnival patch. Take part in the Night Troupe’s events and attractions to earn coins and other rewards. 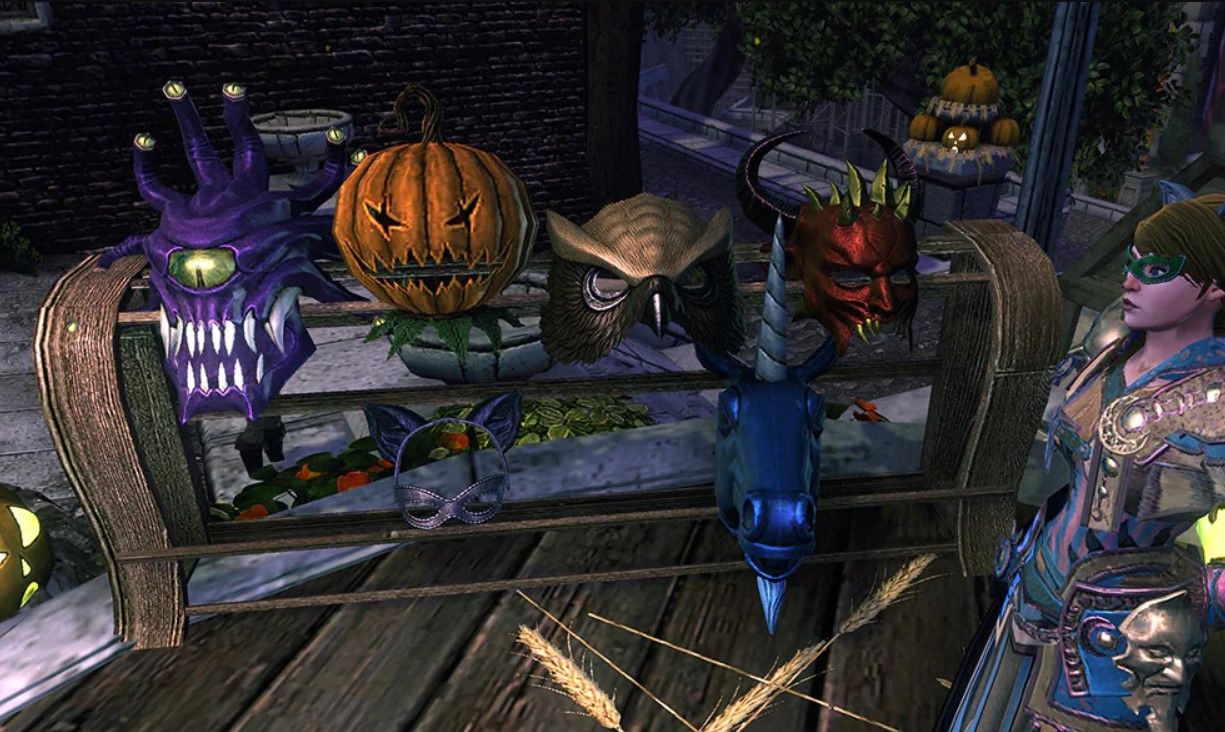 The Masquerade of Liars event returns to Neverwinter on Friday, October 21st. Seek out the Masquerade Master in Protector’s Enclave to kick off your daily quests and earn Masquerade Tokens. Spend your tokens on tons of loot, including the Witch’s Broom, Fancy Owlbear Fashion Set, the Mask of the Fallen, and much more.

In conjunction with the Brimstone Sands update, the Nightveil Hallow event will run through November 1st. Characters level 35 and above can Speak to Salvatore the Mad to aid him in his quest to banish the demon Ballphazu and his horde of ghoulish Pumpkinites.

Skull Island is all decked out for Halloween. Grab a Haunted Galleon from the Crown Shop, or go with a monstrous mount or terrifying pet instead. In any event, be sure to enter the

You may have already missed the first week of the Autumn Harvest, but you still have until November 1st to earn daily and weekly rewards. The quest givers, located in Meridian and Sanctum, will put you on the path toward earning some event currency to spend on spooky rewards such as mounts, pets, and accessories. You can also close rifts for some bonus currency.

I couldn’t find an official announcement, but it appears that the Samhain 2022 daily login rewards started on October 15th.

Another year of development means another year to capitalize off of Halloween. Not everything costs money, though, and a new black and green version of the Neville Lott mask is available as in-game loot. Back to the money-making portion of Day of the Vara, the Fieldsbury Dark Bear helmets and ghoulish green paints are in stock in the Pledge Store.

Shadow’s Eve runs through November 1st on all platforms. Along with some old favorites, a new quest chain will reward players with new mounts. 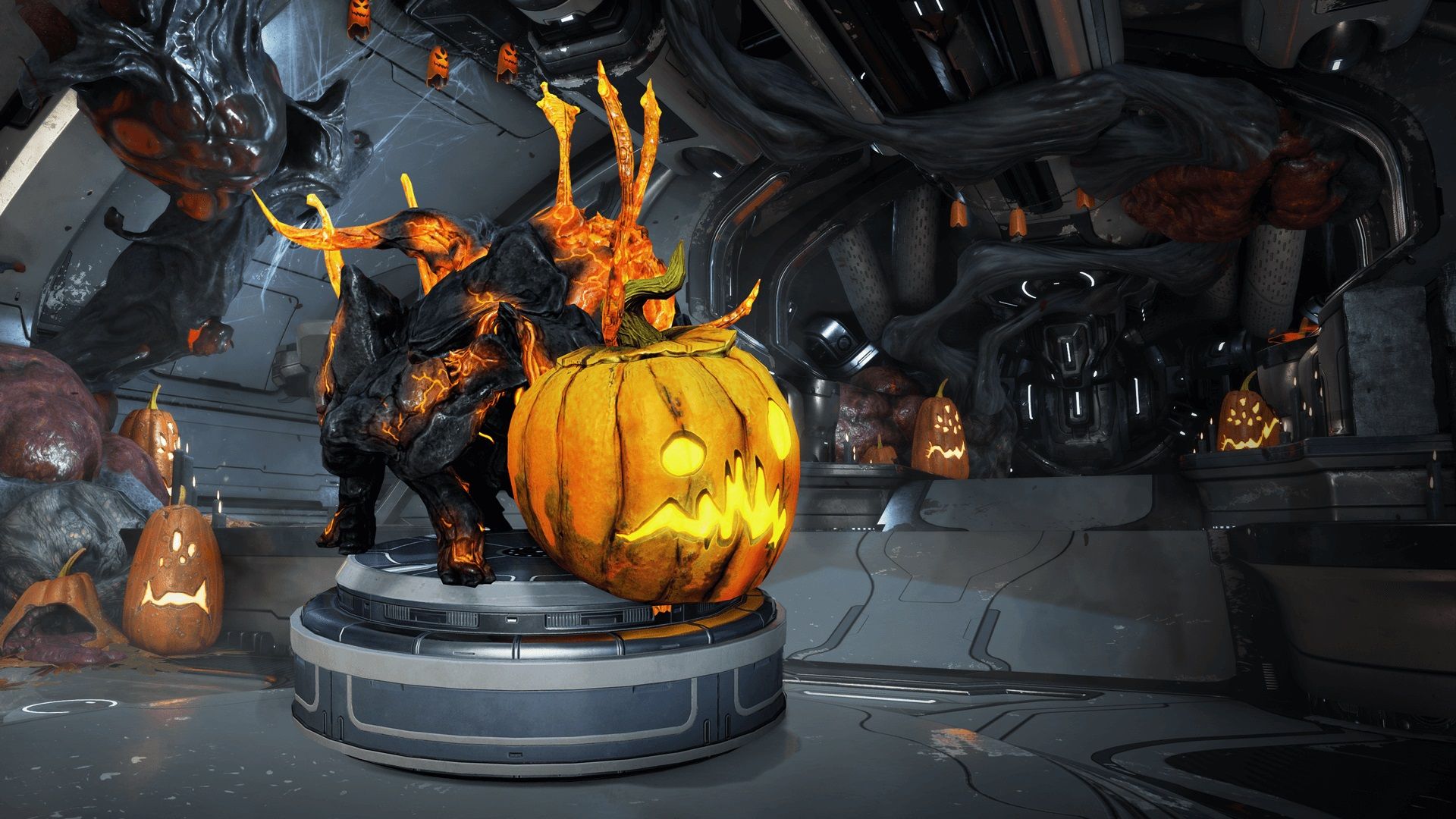 The annual Nights of Naberus event is back and packed with new rewards, including a new glyph, statue, and haunted interior decorations.

Aspiring wizards can get into the Halloween spirit with an assortment of spooky quests and fang-tastic items in the Crown Shop.

The Headless Horseman rides across Azeroth once again! Hallow’s End is arguably one of the largest MMO Halloween events, and Wowhead’s guides (Retail and Classic) cover it all.

There are still plenty of Halloween treats to be found, even if you aren’t into big parties and all the hoopla that the MMOs bring. There are plenty of goodies to be found in the seasonal quests of the looter-shooters, and RockStar has mixed in some Halloween mischief to the day-to-day mayhem of their online offerings. The co-op-centric games also get into the act, sprinkling their own brand of Halloween content. And, of course, the battle royale and other player vs. player games refuse to be left out in the cold by giving players a ton of unique game modes and cosmetic goodies to indulge in.

Destiny 2 - Festival of the Lost

Sea of Thieves - Fury of the Damned

World of Warships Legends - A Light in the Dark