I played The Secret World when it first launched. If it had been a Steam purchase, I would have used the two-hour refund period with an hour to spare. I don’t really recall the exact reasons I quit so quickly, but I do remember The Secret World feeling clunky and bland. Whatever it was that caused my extremely short stint was strong enough that I didn’t even give it a second chance when the revamped Secret World Legends was released.

When I first started compiling MMOs to revisit in the MMO Reroll, Secret World Legends didn’t even make the list. It wasn’t that there was still a bad taste in my mouth from The Secret World, it was because I had completely forgotten that Secret World Legends altogether. But after one of my early Rerolls, someone suggested I give SWL a try, so I added it to my list and downloaded it from Steam. And there it sat, taking up space on my hard drive month after month. With October being full of the supernatural, I figured it was finally time to spin up Secret World Legends and see if it could make it more than an hour past the tutorial.

Speaking of the tutorial, I wasn't sure I was going to get through it. About halfway through my introduction to the Illuminati  (my chosen faction), the client crashed. After three reloads and three immediate crashes, I became concerned. A quick internet search pointed at driver issues, but that was a post from a year or more ago. On the next start of the launcher, I noticed the option to verify the game files, and the problem was solved. I’m pretty sure it was a Templar attempt to put me out of action.

The corrupt install wasn't the only hurdle facing SWL this month. During the two or three weeks I spend checking out the chosen MMO for a Reroll, I am usually playing another game or three during the same time period.  This month was a little different because all of the other games I was playing were not only new releases, but they were direct competitors. SWL had to fight for playtime against Book of Travels, Pathfinder, and Elyon. And fight it did.

SWL is set on a semi-realistic modern-day Earth. Just how realistic is determined by whether you believe in the Illuminati, Templars, and Dragons, the three factions of SWL. The setting provides a great break from running around in chain mail smashing ogres, and it really made me wonder why there aren’t more MMOs set in modern times. Then I remembered that until someone mentioned it, I had completely forgotten SWL existed. 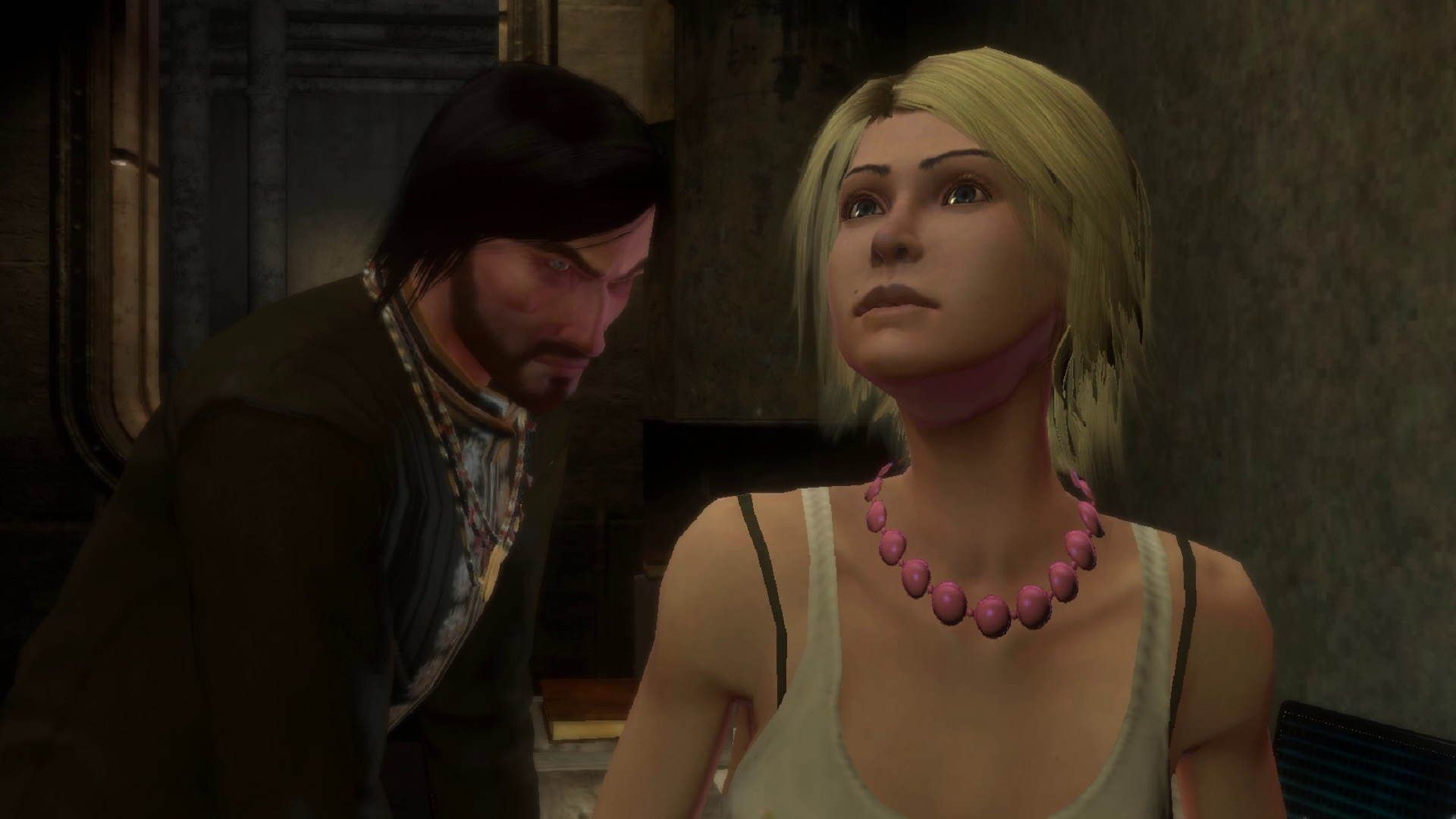 It ain’t pretty, but the voice acting is on point.

Anyway, after the nondescript character creation and short tutorial, SWL dumps you smack dab into a supernatural event that has shrouded a small island off the coast of Maine in fog. And we’re not talking just any old fog here, we’re talking the kind of fog that turns townsfolk into zombies. Investigating the island and finding the source of the trouble was my chance to prove my worth to the Illuminati and be chosen for other investigations across the globe, and at the same time begin to learn about the supernatural war that is consuming the Earth.

The move from characters being bound to a single class to an any role, any time system was becoming popular when The Secret World first launched back in 2012. Funcom’s decision to go this route and define your class by the weapons you are wielding makes it super easy to jump into Secret World Legends. There’s no required reading to determine what class you want to play; just pick a couple of weapons that sound like fun and get started. If you find out later that you don’t like your initial choices or want to expand your ability to fill other roles, all you have to do is change out a weapon or two. Even though any action points spent on weapon abilities will be lost unless you switch back, the minor stat points are still applied even when you aren’t wielding a specific weapon. The negligible power loss is more than offset by the flexibility the system affords. 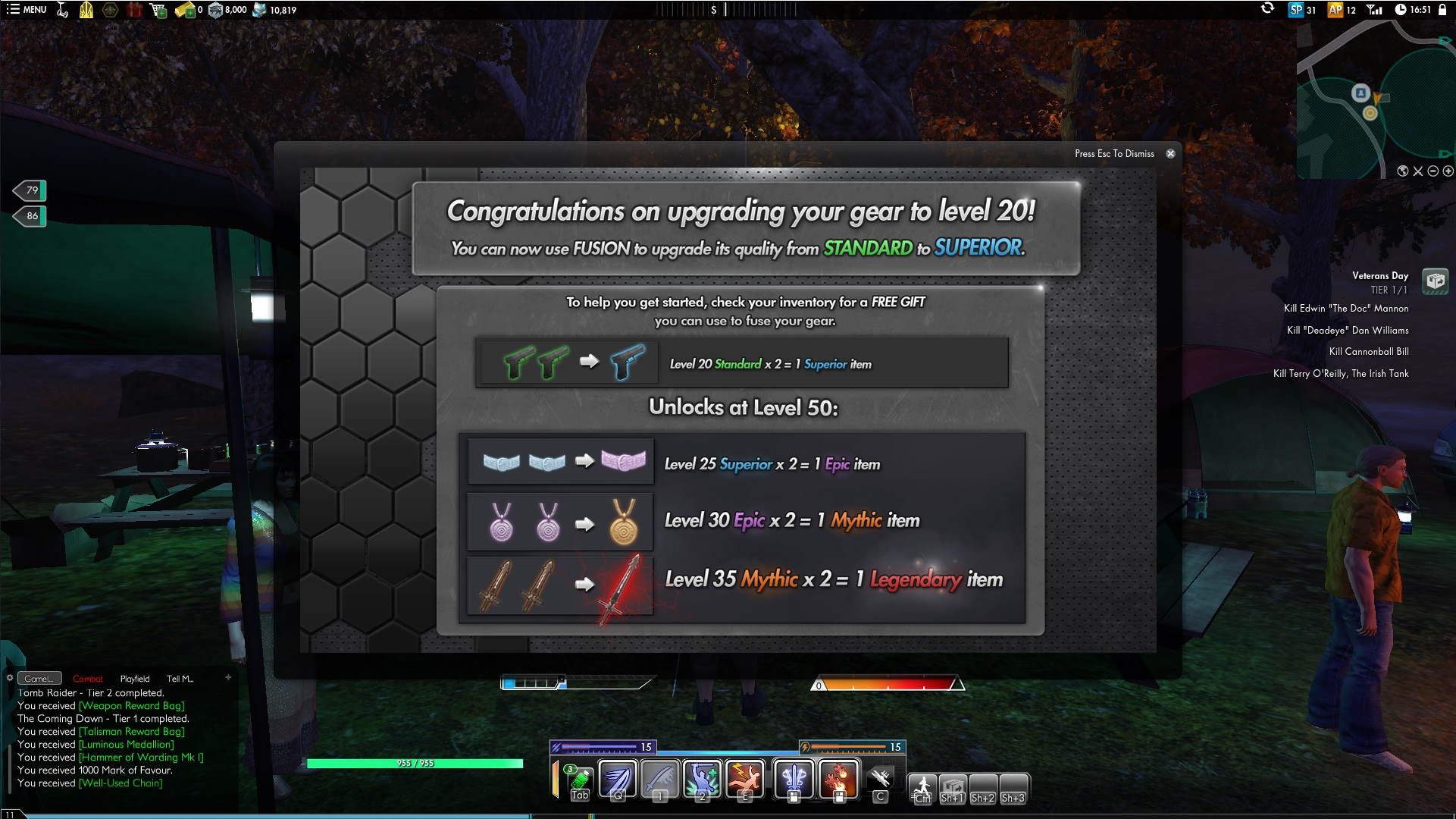 Gear progression is also effortless to get into. Upgrading an item is as simple as placing it in the upgrade window, choosing up to five like items that you want to sacrifice, and having enough cash on hand to pay for the upgrade. Once your item is level 20, you must fuse it with another level 20 item to move it to the next tier. In this manner, two-level 20 greens become a level 1 blue, and so on.

You might say this is all very simplistic for an MMO. I think it works to the benefit of SWL. It really allows the player to focus on the rich story and lore that SWL brings to the table without the distraction of having to repeat missions ad nauseam. And for those really into crafting and think a more complex system is better, does grinding resources make the process more complex or more tedious? The number of players who skip crafting until they max out their character and then buy the resources they need for crafting would say it’s the latter.

This may change in the later levels of SWL, but in the early levels, combat is… boring. While I completely understand that having multiple hotbars filled with 20 or 30 skills and abilities is passé, I found the six-slot hotbar of SWL a bit too small. With two slots taken up by a melee and ranged basic attack, it only leaves four more slots that have to be spread across two weapons. With at least a couple of slots being taken up by healing and crowd control, I found myself spamming two melee attacks nonstop, with a ranged attack thrown in as I approached an enemy or waited out of harm’s way for their area of effect attack to go off. 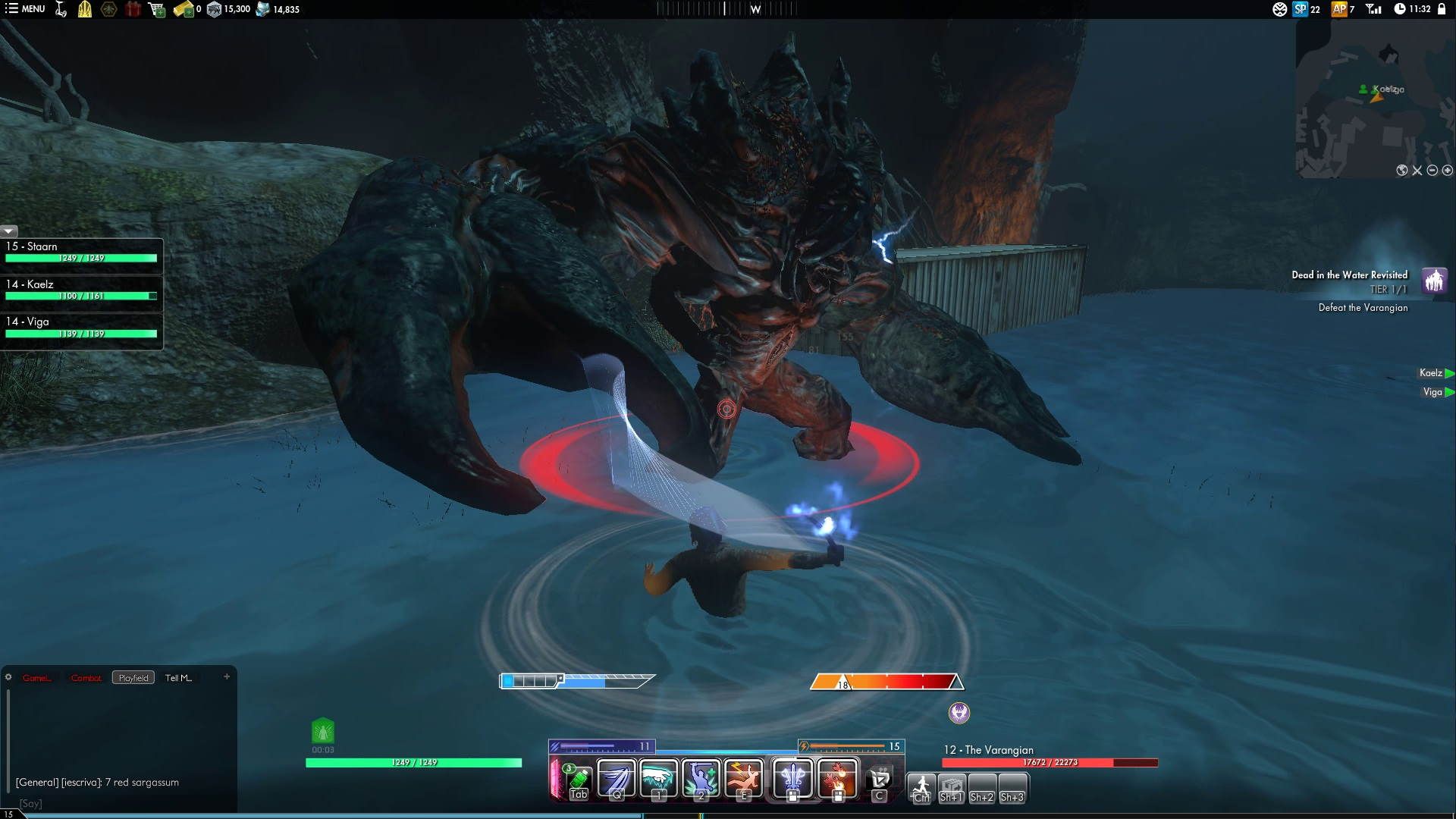 That’s really all there is to say about combat in SWL. There’s minimal action for an action RPG. Very few of the enemies I’ve encountered so far do anything more than use a basic attack. When you come across a creature that uses a special attack, you have more than enough time to get out of the area of effect. At least the monsters look cool.

The weird thing, though, is the lame combat doesn’t bother me. Not to beat a dead horse here, but the main story’s plot is what carries SWL. In true horror game fashion, combat plays second fiddle to the story. Fighting creatures is just a way to get to the next piece of lore or progress the story, not the other way around.

Unlike most MMOs, SWL limits the number of missions you can have active at one time. You can’t run around a zone, collect all the missions, and then start killing everything in sight to complete them. Instead, missions are broken into multiple categories, with each type allowing from one to three missions active at a time. At first, I thought the limited number of active missions would make questing feel constricted. On the contrary, I never felt impeded by only having a handful of goals, and it actually helped me stay on task.

In the early levels, your primary quests are story missions, main missions, and side missions. Even in the early stages, I found the main story enjoyable. A lot is going on, what with the secret societies and supernatural events. It’s a good mix of mythical beings, the occult, and a modern-day power struggle, and I can’t wait to see how it concludes in the later levels. Along with the story missions, main missions help fill in the lore. They come in three varieties - action, sabotage, and investigation. Action missions are all about combat, while sabotage missions usually require stealth to complete. 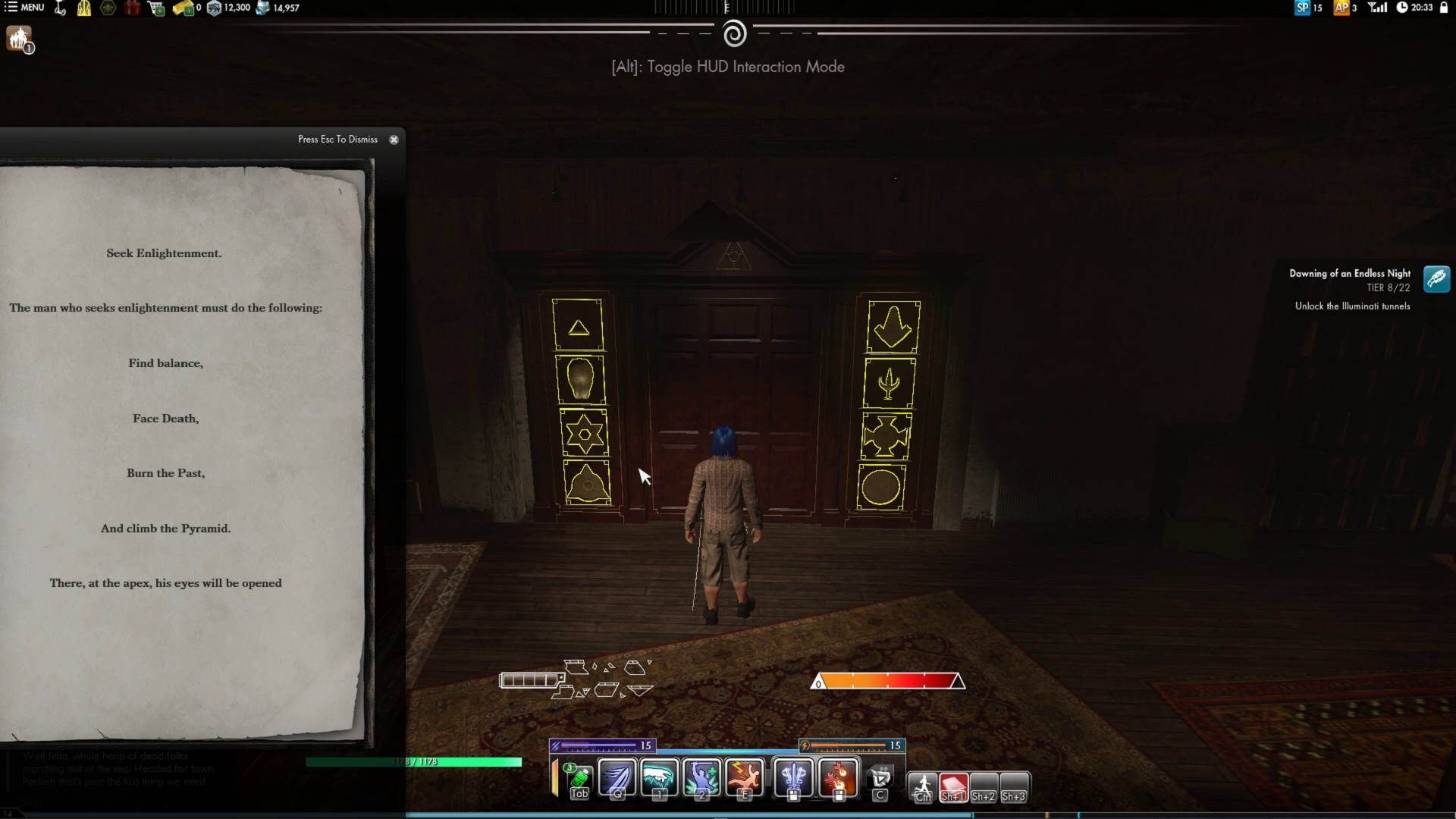 Some puzzles are easy, others not so much.

Investigation missions have been my favorite, though, and are what differentiate SWL from other MMOs. Most of these have very little combat and instead focus on hunting down and deciphering clues. You aren’t spoon-fed the solution to the puzzles either, and you may have to head to the internet to do a little research if you aren’t familiar with the hints given in-game.

Since the side missions aren’t just the usual culling the herd kill quests (at least for the most part), they also help immerse you in the story and lore of SWL. Side missions literally litter the map, and as soon as I finished one, there was always a severed hand or lost cell phone lying around that would get me started on a new mission.

There are also dungeons, raids, and PvP missions if that’s your kind of thing. I queued up for dungeons almost nonstop. Even so, the queue rarely popped, so I could only do a few dungeon runs. It’s a small sample size for sure, but nothing about the dungeon stood out. It seems that even SWL gives in to the MMO standard here, and all the nuance found in other mission types is replaced with the typical trash mobs, mini-boss, main boss recipe. Again, it was only one dungeon, so maybe it gets better in the higher-level dungeons, assuming you can find someone to run them with.

Every time I start a new MMO Reroll, I genuinely try to go into it with an open mind. More times than not, though, if I enjoyed or disliked an MMO the first time around, I come to a similar conclusion during this go around. Secret World Legends has definitely bucked that trend. The first couple of hours were still a little slow, but this time I stuck with SWL long enough for it to show its true colors. Even though the combat is so-so, the classless progression system gives a lot of opportunity for diversity in character builds. 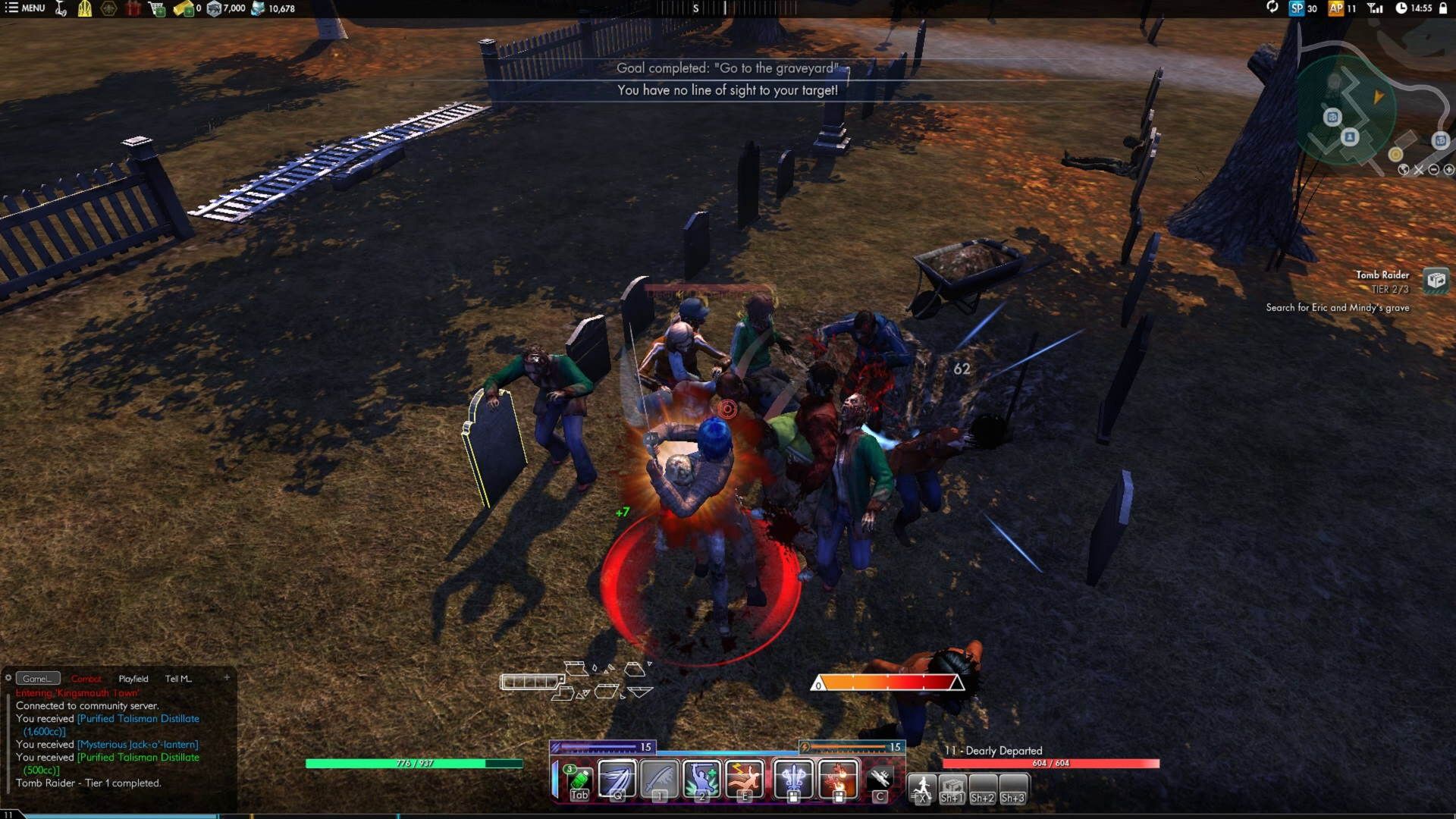 It’s the story and quest structure that shines in SWL. Every nook and cranny of SWL is full of mystery and intrigue, and although the graphics aren’t top-notch, the excellent voice acting helped keep me immersed in the story. I only have one concern about SWL, and that is the size of the population. Most of my time with SWL was a solo affair. Even though running through the story and side missions alone is pretty much the norm these days, I rarely saw anyone else running a character through the low levels. Funcom does bill SWL as a shared-world action RPG, not a true MMO, so maybe this is how everything is supposed to be. If so, I think stripping SWL of any MMO trappings and making it a single-player RPG would make it a much better experience.

I have one last thought before I go. As always, the MMO Reroll is about the early levels. However, this month I wish I had more time to push further into SWL and see what the end game offers. Please let me know what I am missing out on in the comments below.