I always thought March Madness referred to the NCAA Basketball Tournament. This year it seems you could apply that moniker to Gamigo and their stable of games. At the end of February, Gamigo announced they would be sunsetting Twin Saga, Defiance, and Defiance 2050 and urged players to try out one of their other MMOs. RIFT was mysteriously left off the list of their recommendations, fueling speculation and rumor that RIFT was short for this world as well.

Then, just a week or so later, Gamigo announced significant layoffs that would affect the RIFT development team. Even with Gamigo trying to quell concerns by promising RIFT wasn't going anywhere, speculation of riffs impending doom has only increased.

With fresh marks in the Gamigo chopping block, I knew what I had to do. Even though I had already downloaded and started playing a different MMO for March, I quickly switched over to RIFT. It was now or never if I was going to give RIFT the MMO Reroll treatment. Is there any chance RIFT is safe like Gamigo says? And even if it isn't going anywhere, is there anything left for a new player to get excited about?

Back In The Day

Here's the deal. Back in 2011, Trion Worlds released RIFT. Anybody and everybody who had ever played an MMO was lined up and ready to play. Knowing that it was going to be very popular, Trion had servers galore prepared to host all the ex-World of Warcraft players they were sure to pull in.

On day one, everyone hit the ground running. RIFT was everything MMO players were looking for. Bleeding edge graphics, a compelling quest system, challenging but fun dungeons, and dual faction PVP were all received great praise. Trion's New soul system was perfectly balanced and allowed players to quickly change rolls as needed, going from tank to healer to DPS, depending on what the party needed. And where so many other developers have failed, Trion’s open-world rifts had players gathering in droves to fend off invasions and world bosses.

Tryon had created the perfect MMO. Players were calling up their old guildies and telling them about the new promise land. Players were converted from World of Warcraft in the thousands, the open-world content was pulling in old Warhammer fans, and Everquest players were trying out a newer, better version of their decade-old game. 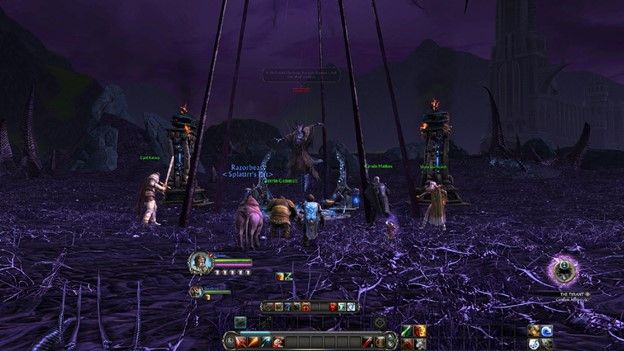 At least, that was my vision of how things would go down when I pre-ordered RIFT ten years ago. Part of that vision actually came true. Several of my guildies at the time had also pre-ordered RIFT, so we already had a leveling party ready to go. But the grumbling started almost immediately. Players landed in server cues that numbered in the thousands, only to be followed by a shortage of quest mobs due to slow respawn rates once they finally made it to the world of Telera. World events did attract large amounts of players, creating horrible lag and making it difficult to tag targets for XP.

As we hit level cap and started raiding, we could not draw other friends into the game, so our small group ended up being absorbed by a larger guild. Over the next couple of months, our new guild tried to hold it together, but boring daily quests and raids that didn't offer anything new or compelling started eroding the player base. Just two months in, I was the last remaining player from my original group. With my current guild losing members faster than it could gain them, I jumped ship and returned to the MMOs of old, head down and tail between my legs.

Every time I start anew in an old MMO, I find something familiar but still different. Usually, the core gameplay is still the same, with some new mechanics introduced and old ones tweaked. Besides a few minor changes and quality of life enhancements (aka ways to speed up leveling), RIFT didn’t really give me that impression. Sure, the tutorial is shorter, but everything else was just like I remembered it.

There wasn’t much new in character creation except a few more souls that had to be purchased. There are still two factions to choose from, with the same races and classes I remembered. The shortened tutorial teaches the basics of movement and combat, and then you are thrown into the main questline. 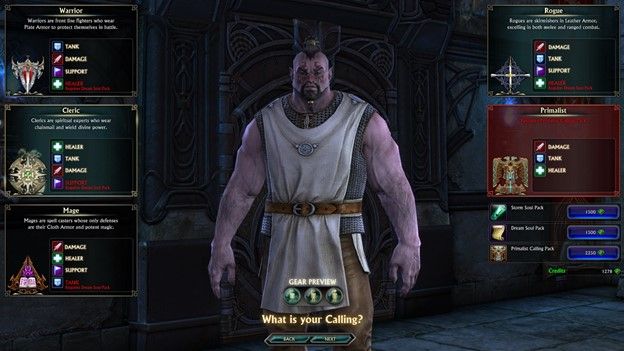 Charging for healing and support roles? I guess you want even fewer people to play them?

That’s not to say that the lack of change is a bad thing. RIFT truly marks off all the MMO activity checkboxes. Even at launch, it was full of non-quest activities. There are artifacts to hunt down and collect, and as long as you don’t mind killing innocent creatures, you can also collect creature tears. Multiple gathering and crafting disciplines are there for the picking, and you can spend hours fishing instead of leveling your character if that’s your sort of thing.

One Bad Change To Rule Them All

Like most MMOs of the era, one of RIFT’s allures was the option to choose your path for leveling. Questing, open-world events, and dungeons were all valid ways to spend your time grinding to level 50 at launch. Today, most of those options are gone.

You can still level your character by going through quest after quest. And just like I found with FFXIV, you don’t have to complete every last quest in a zone to earn the experience you need to advance. Leveling through quests is much faster than it used to be, and if that’s your kind of thing, then go for it.

If you want to level through open-world events, well, it isn’t going to happen. Footholds, rifts, invasions, all of the events are still there. You just won’t find anyone doing them. The same goes for leveling through dungeons. I tried using the Looking For Group to run low-level dungeons a total of two times. After spending an hour in the queue both times (I tabbed out and worked on other things as I waited), I am positive that LFG is dead.

That doesn’t mean there aren’t players leveling characters; they are. They are just using Instant Adventures and Intrepid Adventures to do it. For anyone who just wants to get to max level as fast as possible, this is currently the way to make that happen.

Instant Adventures give loads of XP but not loads of fun.

Joining an Instant Adventure puts you into a raid group and throws you into the action, teleporting you around the world to complete quests. You are leveled up to match the current zone’s content level without giving you the additional skills to go along with it.

Intrepid Adventures are similar but toss you into raid content instead of open-world quests. Just like traveling from zone to zone is replaced by teleporting you around in Instant Adventures, all of the trash mobs are removed by Intrepid Adventures. What’s left is a disjointed raid experience. All of the remaining encounters are beaten with a brute force method. My raid group didn’t even have any tanks, and the healers focus more on damage than healing.

Leveling in both types of Adventures is unbelievably fast, with Intrepid Adventures being the quicker of the two options. I went from level 20 to level 30 in about an hour in just one Intrepid Adventure. All in all, Adventures have watered down all of RIFT’s content into something that closely resembles those mobile idle-clicker games.

So, why? Why even have leveling if you’re not going to use it to show a player what the game has to offer? Instant Adventures may show you all the different landscapes RIFT offers, but they don’t give you any of the story or lore of Telara. You won’t learn anything about your character except how to spam your attacks. And there are so many players coming and going that you aren’t going to create any friendships along the way. 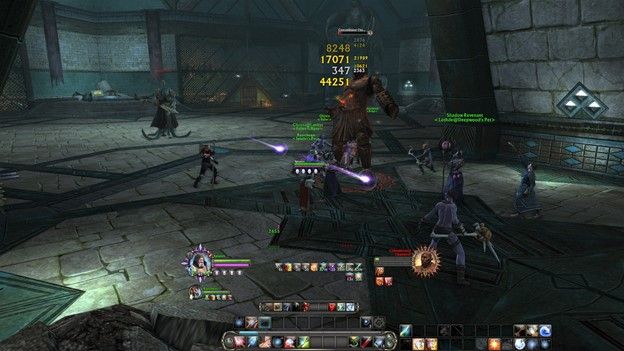 Intrepid Adventures give all the XP of a raid without the hassle of actually doing the raid.

Adventures are all about getting XP as fast as you can so your character can do whatever players do at the max level these days. Even though it would only take me a few more hours to finish leveling my little dwarven rogue, I just couldn’t bring myself to push all the way to max level. I worked through the story quests for a couple of hours before spending about an hour each on the Instant and Intrepid Adventures. I then played a few more hours of running through regular quests, with the disgust of the IAs growing in my mind, before finally calling it quits.

I spent about ten hours total leveling in RIFT, which is probably more than most players have to spend running Adventures to get to level cap. But that’s all the time I could spend on RIFT before I pushed it aside this time. That is by far the least amount of time I have spent on any of the MMOs I’ve played in this series. Even Dark Age of Camelot got several more hours to prove itself, and anyone who has been following this journey knows how that ended.

At least DAoC wasn’t ruined by the developers as RIFT has been. Actually, no, that isn’t fair to the people who have poured their hearts and souls into RIFT over the years. It isn’t their fault a perfectly good game has gone to crap because executives have mishandled RIFT in their pursuit of money. I would bet that most people who have worked on RIFT feel the same way I do about what it has become.

As I leave RIFT behind, I have to wonder what it could have been? RIFT was supposed to be a WoW killer. It had everything MMO players were looking for. There are quests for the theme park fans and open-world events for the sandbox groupies. PVP was active when RIFT first launched, and end game players had dailies and raids to complete. But none of it mattered.

RIFT couldn’t take down the king of MMOs. Trion needn’t be ashamed; no one has been able to. Wildstar didn’t even make it five years before shutting down. Final Fantasy XIV is the only tab-targeting MMO that comes to mind as successful since WoW came on the scene, and that’s only because Square Enix wasn’t greedy and survives with subscriptions that aren’t in the millions. 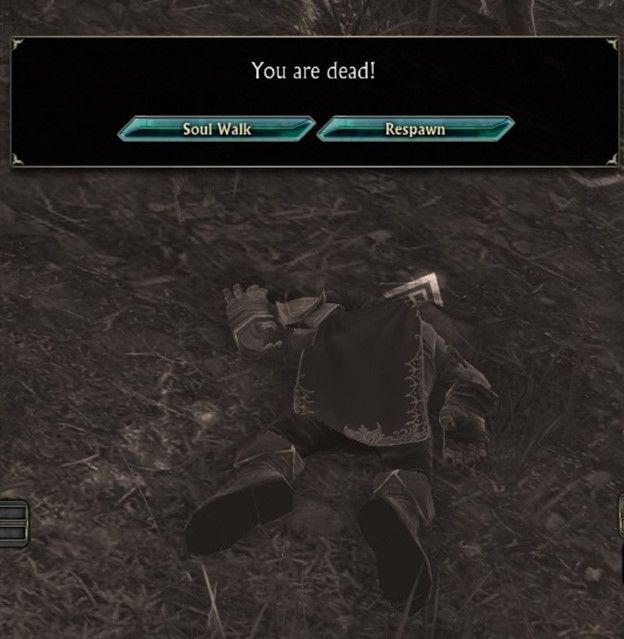 RIFT, you are dead to me.

It’s that greed factor that will finally kill off RIFT. Over the years, first Trion and now Gamigo have made every misstep possible in their pursuit of revenue. RIFT’s monetization has pushed away so many players it must be down to the small but dedicated player base to keep the game afloat. If they had accepted the lower subscription numbers they had instead of finding new ways to lose players’ trust, the situation I find RIFT in right now could be completely different. But, as it stands, RIFT doesn’t give any compelling reason for a new player to start playing unless you just want to be able to say you were there at the end. And whether Gamigo is ready to admit it or not, the end of RIFT is coming sooner or later.

It really saddens me that RIFT didn’t hold up better than it did. If only someone in charge had tried to make RIFT a better game instead of squeezing it for every dollar possible, there wouldn’t be rumors about how it will be going away.