I never really knew much about Final Fantasy XI before choosing it for this month’s MMO Reroll. I’ve never been interested in the Final Fantasy series as a whole, and the only time I ever gave the franchise more than a sideways glance was when a few guildies forced me to play Final Fantasy XIV. As for FFXI, I basically knew that it existed and little more. I remember reading several years ago (2015 to be exact) that FFXI was going into maintenance mode. Given that Final Fantasy XI was developed for the PlayStation 2 and released in 2002, I figured it had a pretty good run. Seeing other companies shut down MMOs that were still profitable (City of Heroes anyone?) because it wasn’t worth the effort to keep them running, I expected that within a year or two, Square Enix would sunset FFXI.

The console versions did get the axe in 2016, and a mobile version that was in development was eventually canceled, but the PC version continued on. Someone must have forgotten to tell the development team that FFXI went into maintenance mode. Over the last 5+ years since putting FFXI into maintenance mode, not only has the reduced development team continued to patch up old bugs, they have also continued to push out balance updates and new content. Yes, new content.

Month after month, new Ambuscale encounters are released. In 2020 the team added Odyssey, a new battle challenge for players to enjoy. And 2020 was also the year that the developers started adding a new storyline, Voracious Resurgence, to FFXI. That’s right, an MMO in maintenance mode is getting as much or more new content than many ‘active’ MMOs.

Without a large development team to build a full-fledged expansion pack, Voracious Resurgence has been introduced chapter by chapter through the monthly updates FFXI was still receiving. And if you think about it, this design style is a pretty good way to keep players coming back month after month, casually digesting new content instead of blitzing through a full expansion in a few weeks. Breaking Voracious Resurgence into pieces has helped keep the upfront cost of development low while keeping the monthly sub count and resulting revenue somewhat consistent. It’s a win-win.

With so many MMOs to choose from, and my overall lack of interest in the franchise, you might be asking why I have decided to jump into Final Fantasy XI and give it the Reroll treatment? It’s very simple, actually. August marks the end of the first year of the MMO Reroll column, and since I started the whole thing with Final Fantasy XIV, I figured why not finish up the year with the other Final Fantasy MMO? Yeah, that’s how deep some of my decisions are - more impulse and randomness than actual thought and planning.

If you recall, the last time I tried out one of the older MMOs I had never played, things didn’t go so well. Everything was just so old! This time around, I could once again complain about the character creation process, an outdated UI, and a slow and lonely leveling process. I could, but I won’t. As someone pointed out with my Dark Age of Camelot Reroll, why state the obvious?

We are talking about an MMO that is nearly two decades old, so I shouldn’t be approaching them the same way I would a more modern title. I mean, although someone might pick up Black Desert Online and expect something relatively modern, I doubt anyone is grabbing a copy of Final Fantasy XI thinking they are going to experience amazing graphics and all the contemporary quality of life conveniences that have become standard in MMO development. 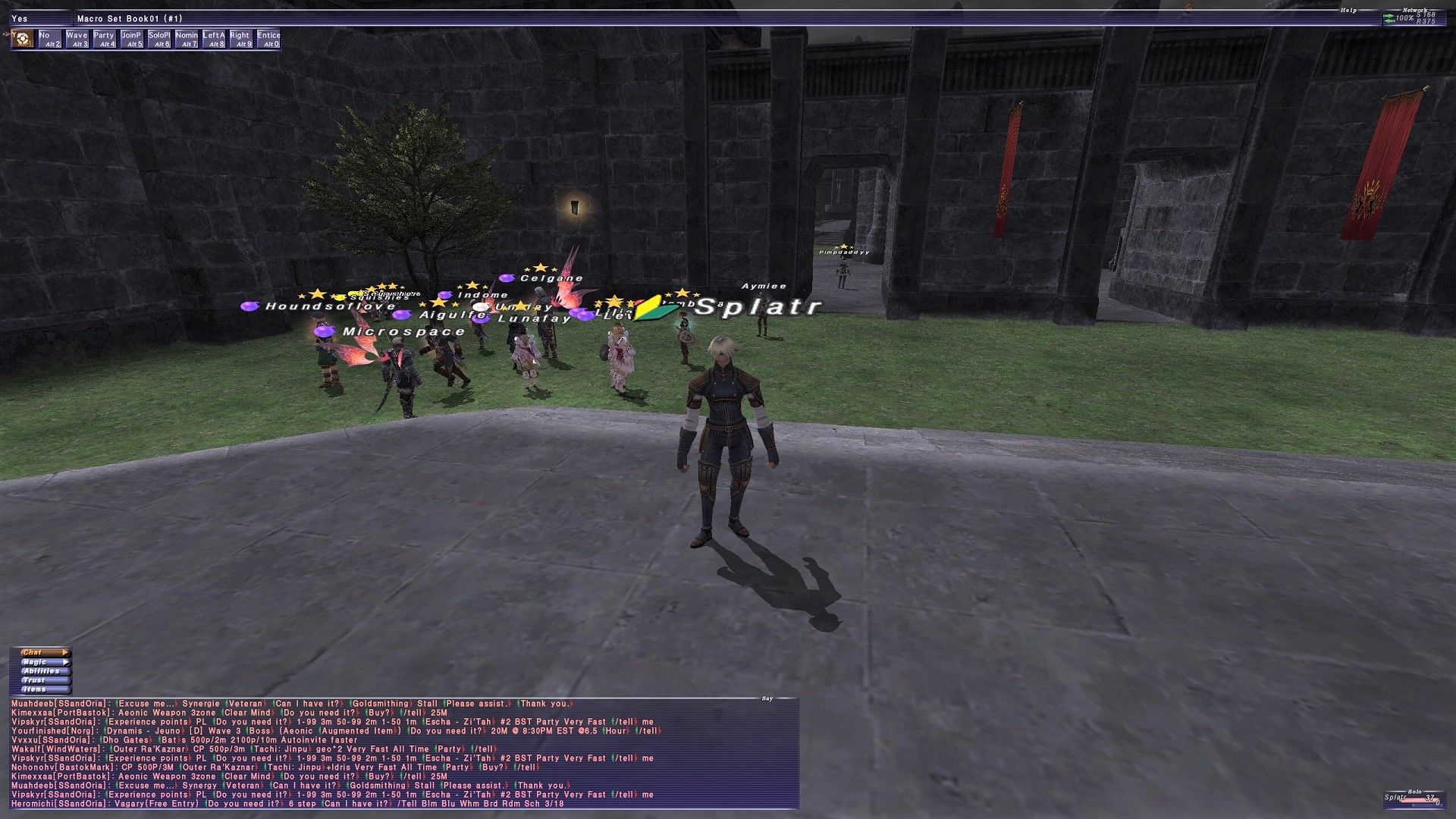 I'm not doing a complete 180 on my process, though. I'm still going to cover some of the pain points I experienced during my time with FFXI. However, this time around, I am going to pick my battles. I also kept another criticism of my DAoC Reroll in mind and took the time to find solutions to the obstacles I faced instead of simply writing the MMO off as old and antiquated.

Getting signed up for the FFXI free trial and installing the game was a little archaic. A quick trip to the Square Enix store was all it took to get a key for the two-week trial - from there, clicking the Download button loaded up a page with a multi-step installation process. It began with downloading a five-part RAR executable. I then unpacked all the files, picked an installation location, and after a few moments, the FFXI installer was finally ready to go to work.

Um, isn’t this 2021? I get that FFXI is almost 20 years old, but Square Enix really needs to update the install process for FFXI. I find it silly that a Triple-A studio still requires a multi-part download that has to be unpacked just to get to the point you can run the installation. This has to be one of the clunkiest installs I’ve seen in a long time, and considering I did the private server roundup not too long ago, that’s just sad. Square Enix can’t even match the installation software of people working on a passion project! I wonder how many people never even make it through the installation process?

It turns out there is a better install. After downloading and installing FFXI from the Square Enix store, I found out there is also a Steam version available. The Steam install is the user-friendly, hit the download button and click the setup file process I was looking for. So if you plan on giving FFXI a try, be sure to download it from Steam. It’ll save you some time. Problem solved.

When I Rerolled through Dark Age of Camelot, I gave low marks for the user interface. I believe the exact words I used were, “It’s a bust.” To all of the DAoC fans that took offense, I owe you an apology. My big complaints were how hard the font was to read and having difficulty with inventory management.

Well, I am sorry. I was wrong to judge so harshly. In retrospect, those were really just minor inconveniences and were nothing compared to what was in store for me with FFXI. It's been a long time since I've had to navigate a UI like what is found in FFXI.

For those of you who haven’t played Final Fantasy XI, the user interface is menu-driven. Just like other RPGs from the turn of the century, you must navigate through submenu after submenu to access character sheets, skill lists, quests, and generally every other function you might need to perform. It is cumbersome at best, and I can only imagine how much worse it would be if I traded in my keyboard and mouse for a PS2 controller.

I do have to admit there is a positive side to the menu system. Hiding everything away in the menus means there aren't a bunch of hotbars obscuring my view. Other than a small hitpoint bar and a configurable chat window, there’s an open view of your character and their surroundings.

Where the menu system really becomes an issue for me is during combat. Going through multiple menu layers just to choose between physical or magical attacks has always been a pain, and I say that with turn-based cRPGs in mind. Having to do it in a real-time combat system? It's crazy rough. 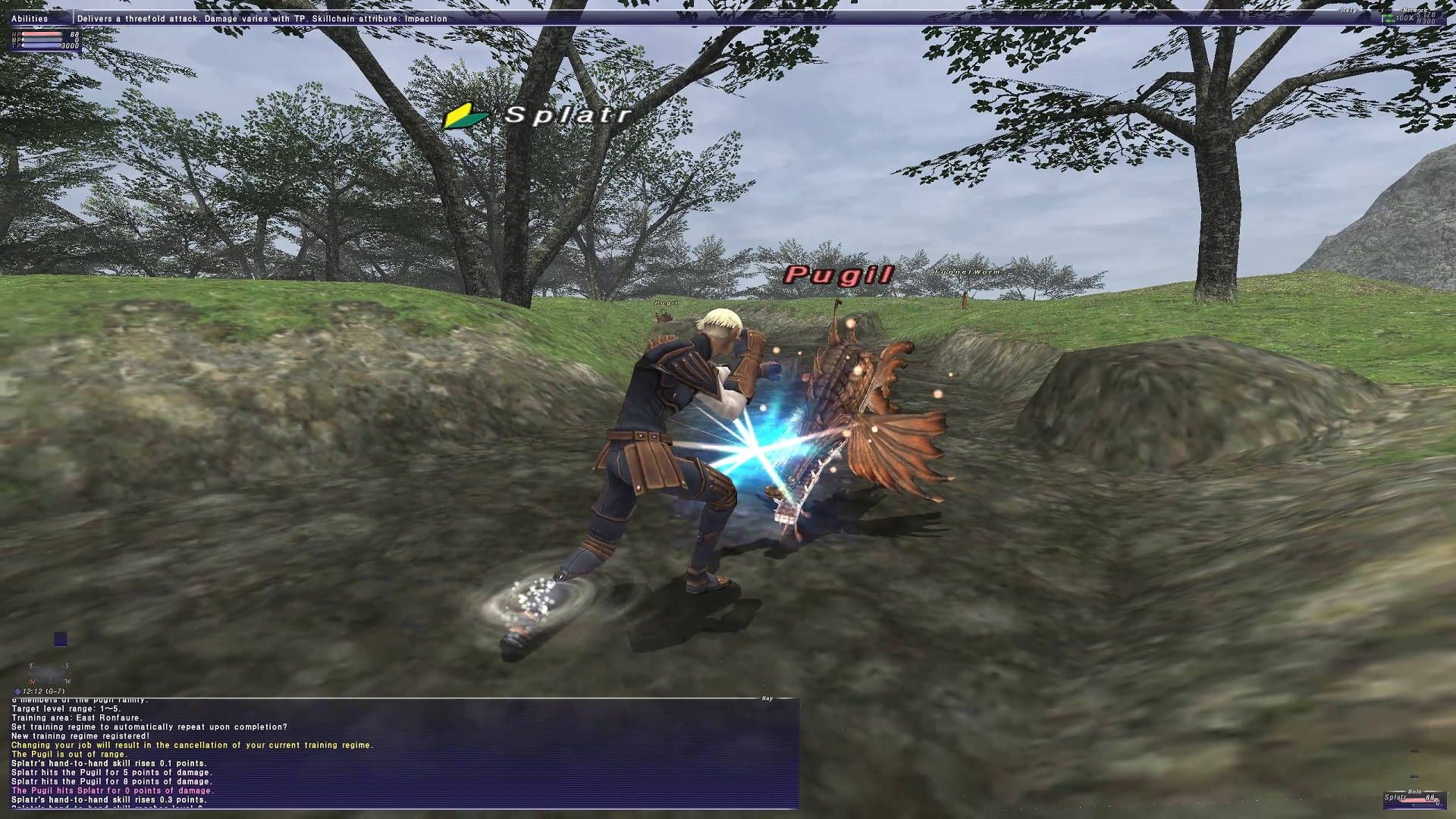 It took a little while, but I did start getting used to the menu system during combat. The whole time, I kept thinking I was missing something, though. Looking for a magical answer to my menu woes, I hit up the internet. As I suspected, between macros, command-line shortcuts, and pure muscle memory, veterans were whipping through macro books to cast spells, change gear, and do just about anything else you could think of with little effort. If I were a betting man, I would wager that FFXI players who have mastered the menus and macros are as quick as, if not quicker, than someone using the multiple hotbars found in other games.

Where To Go? What To Do?

Final Fantasy XI is the epitome of the Old School MMO experience. After character creation, you are thrown into your starting zone with little idea of what to do next. If you’re looking for a hand-holding tutorial, you might as well uninstall FFXI and find a different game to play. There is a tutorial of sorts, but it is super easy to miss (aka I wasn’t paying attention). So step number one in finding your way in the world of Vana’diel - pay attention to the NPCs and keep track of what they want you to do.

Completely lost and unsure what to do, I turned to the community and the internet for help. What transpired next falls under the category of ‘internet rabbit hole.’ If you aren’t sure what that is, it’s when you become completely engrossed in a topic and start clicking link after link, only to resurface later to find hours of your life are missing. It’s almost like being abducted by aliens.

My FFXI rabbit hole began with a simple enough search - FFXI beginners guide. If I had to make a guess, I would say that I then spent as much time searching the internet for how-to guides and tutorial videos as I did actually playing FFXI. The sheer number of official and community-created guides is almost overwhelming. After my initial search for a beginners guide, of which I found several, I spent a whole afternoon working through guides to improve the visuals of FFXI (I’m still not sure I had everything installed correctly and working 100%).

Some more time to add a mini-map. Then, more time figuring out which other addons were helpful and which could be ignored. I even spent a bunch of time reading and watching videos on how to set up macros. I never even got to the point where I actually created any macros; God knows how much more time that would have taken. Then...well, you get the point. Some people will want to figure everything out on their own, but if you aren’t that kind of person, there’s plenty of resources to help you find your way in FFXI.

That doesn’t mean that others shouldn’t give FFXI a try. If you’re willing to search through all the guides and mods to upgrade the user interface and then push through the first few hours, Final Fantasy XI holds a world full of lore and story. With almost twenty years worth of content, it’ll take a long while to explore all that FFXI has to offer, and the developers don’t show any sign of packing their bags and moving on.

We’re one year into the MMO Reroll now, and I’ve gone on twelve wonderful adventures. For those who stuck with me through all of them, thank you. I hope you’ve had as much fun as I’ve had revisiting the MMOs of my past. Some months were a good time, others not so much, but at least every one of them sparked some conversation over the MMO covered.

As I prepare to start Season Two of the MMO Reroll, I wonder how things will go? Several new MMOs are coming out over the next few months that I plan on checking out, and I wonder what kind of an impact those games will have on my impressions of the Reroll titles. Will playing something with shiny graphics and modern conveniences drive another nail into the coffin of the games I’ve left behind, or will the modern MMO landscape help me better appreciate the MMOs of the past? I guess we’ll see soon enough.