I would best characterize Gamescom 2018 as simultaneously quiet and loud. It’s typically one of the largest shows of the year and there are sometimes huge surprises that didn’t quite make it for E3, but end up being ready for Gamescom. This year felt a bit different for me. There were a ton of new trailers and some key developments, but nothing truly awe-inspiring (well, except one thing, but more on that later). In any case, Gamescom 2018 did still tick some key boxes for me and these are my highlights listed in no particular order.

I’ve been playing the Ace Combat games since the beginning of the series and with a few exceptions they’ve been some of the most enjoyable games I’ve ever played. Featuring arcade style jet fighter combat with tons of crazy hardware and storylines that could probably be best described as Metal Gear Solid with jets, the Ace Combat series has been almost endlessly entertaining.

Unfortunately, it’s been quite a while since we’ve seen a new entry in the main series (Ace Combat 6 came out in 2007!). This left me only with games such as Tom Clancy’s HAWX to scratch my Ace Combat itch. When I first learned that Bandai Namco greenlit Ace Combat 7: Skies Unknown, I was ecstatic, but it’s been a bumpy road since then. We’ve seen the game delayed numerous times already, but at this year’s Gamescom we finally got a (hopefully solid) release date.

I’m pretty much excited for any news in the world of MMOs. We need a new big hit from a AAA developer to kickstart the genre once again and when I learned Amazon Game Studios was working on one I was honestly shocked. The supernatural 17th century setting is a nice touch, too. Gamescom not only gave us some screenshots of the game, but a preview with a solid amount of new information, and even alpha signups.

Unfortunately, my hype for New World has died down just a bit as those details revealed to me a game that sounds more like Conan Exiles than Age of Conan. Sure, the scale sounds much larger, but I was hoping we’d get a true, proper MMO from AGS. I don’t mind a Conan Exiles style of game, so I’m still pretty pumped, but I’m just a wee bit disappointed. 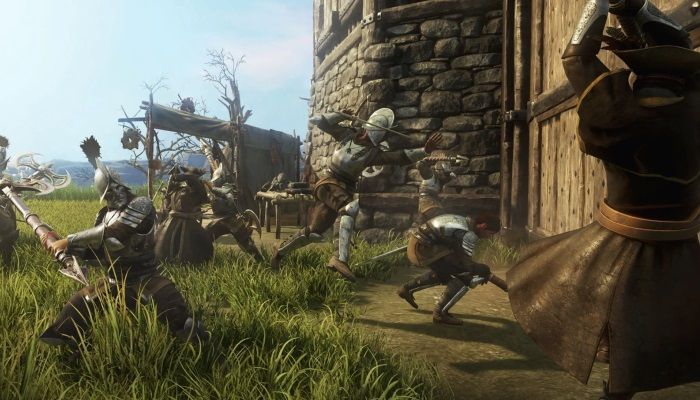 As far as I’m concerned, RE2 was the best Resident Evil ever made. I know plenty of people will disagree. The series has evolved considerably since then, particularly with games like RE4 and 7, but RE2 just nails the atmosphere of a zombie outbreak so perfectly for me that nothing else in the series has managed to top it. Capcom’s announcement that it was going to remake RE2 had me practically bouncing in my chair and to top it off it looks absolutely amazing from top to bottom.

The game isn’t a 1:1 remake, which means that it will benefit from the aforementioned evolution the series has enjoyed since Resident Evil 2 originally released in 1998. With the Resident Evil 2 remake, Capcom is making my favorite (but dated) Resident Evil into what I feel will likely be considered the best game in the series once it drops in early 2019.

Gamescom didn’t deliver any mindblowing revelations about RE2, but we did get a bunch of new gameplay footage, including an entire Claire Redfield segment, which looked amazing.

I like the Soulsborne genre more in concept than in practice. I enjoy the emphasis on challenge that these games focus on, but there’s just something about the combat in most of them that I find just way too plodding. Nioh kicked up the tempo a bunch, but it had other issues which marred the overall experience. The Surge 2, which dropped a new trailer at Gamescom, looks considerably faster and has definitely piqued my interest. But the real standout was From Software’s Sekiro: Shadows Die Twice.

The game looks almost like a sort of cross between Tenchu and Dark Souls, which is fitting, because From Software made both games. The game’s pace looks to be a bit quicker, there’s more of a focus on stealth, and plenty of mobility options (including an impressively versatile grappling hook). The Gamescom footage just looked great and I’m excited to see more.

This one isn’t a game, but it’s certainly related! NVIDIA unveiled its new series of consumer graphics cards at Gamescom and this time around it’s not just about performance bumps. With RTX, NVIDIA is going all in on the Holy Grail of grail of computer graphics: real time ray tracing. Ray tracing has been the end goal for graphics for decades, but it’s incredibly intensive to try and pull off. We really only see the results of ray tracing in films, because studios can take the time to render the scenes. Pulling ray tracing off in real time, which is necessary for making it work in something like a videogame, wasn't really feasible until now.

Currently, developers employ tons of tricks to simulate lighting, shadows, and reflections in games. It’s pretty ugly if you have an eye for the methods’ flaws, but this has been the best we've been able to do without ray tracing. Ray tracing allows you to simulate all of these things so that they look natural and realistic. While I have my expectations curbed for the first generation of these cards, the release of RTX will likely blow the doors open for what may be a truly transformative advance in computer graphics technology in games. The first examples of RTX implementation in upcoming games already look great and I can’t wait to see where the future leads. If you want to learn more, NVIDIA’s put together a helpful blog post.

What are some of your highlights of Gamescom 2018?