With the marred release of Elite Dangerous: Odyssey much of the hype surrounding the space simulator was abandoned. The troubled release saw the game broken for many and nearly unplayable. Developers Frontier have since made great strides in fixing Odyssey’s litany of bugs and issues. Now that the bugs are fixed and many of the new features implemented, let's take a deep dive into one of the three main types of gameplay in Elite Dangerous: combat.

With the introduction of Odyssey, Elite Dangerous gained its space legs, allowing players to exit their ships to take part in various activities. As with in-ship gameplay, combat is one of the three pillars of gameplay a player can choose to take. There are multiple ways to enter into on-foot combat. A player may enter a conflict zone settlement, take bounty or network missions from any station or settlement offering them, or simply take part in any illegal on-foot action, such as shooting a player without a bounty, to force themselves into a shootout.

Players can enter combat with any loadout by selecting from any of the four suit types and utilize what tools they like the best. Players are allowed to choose from any suits, weapons or equipment they would like to enter combat. Due to the limited selection of suits currently available in Elite Dangerous, the Dominator suit is the only viable option for fighting groups of enemies. The Dominator, being the only combat-oriented suit, is capable of equipping two primary weapons, a secondary, and a multitude of grenades. The drawback of the Dominator is a lack of a suit-specific tool or backpack storage. 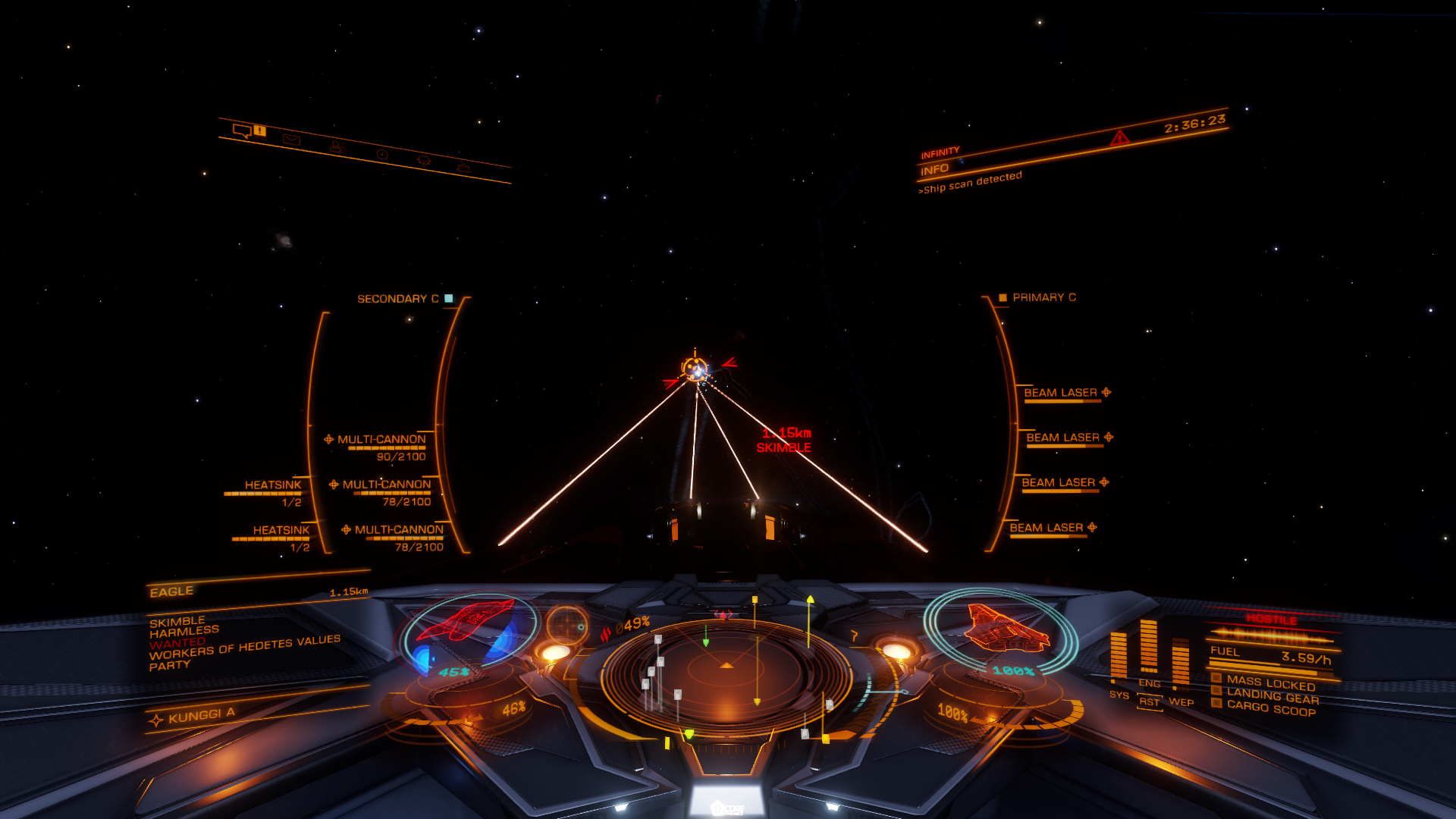 Like ships, specific weapons do specific damage in on-foot combat. On foot, laser weapons are more effective against shields than health. Kinetic weapons, meanwhile, are more effective against health than shields, and plasma weapons are a balance of the two. This weapon balance makes the on-foot combat consistent with Elite Dangerous and unique from many other first person shooters available today. However, even with this uniqueness, on-foot combat in Elite Dangerous may just not be worth the time.

This is partially because the profitability of on-foot combat in Elite varies wildly from no profit at all to highly profitable, all dependent on how the player chooses to engage in combat. Because of how easy it is to die, the probability of not profiting from missions due to failure is much higher than it is by engaging in-ship combat. Any death apart from combat zones during an on-foot combat mission immediately fails that mission.

This is where player choice re-enters combat. Combat zones work on a bond system which gives you credits for earning kills or winning the battle. These zones also vary in difficulty, ranging from low intensity to high intensity zones. If a player does not get kills and loses the match, they don’t earn any credits. But it is also possible for a player to get a multitude of kills and, in a high intensity combat zone, earn hundreds of thousands of credits. However, this payout pales in comparison to missions. 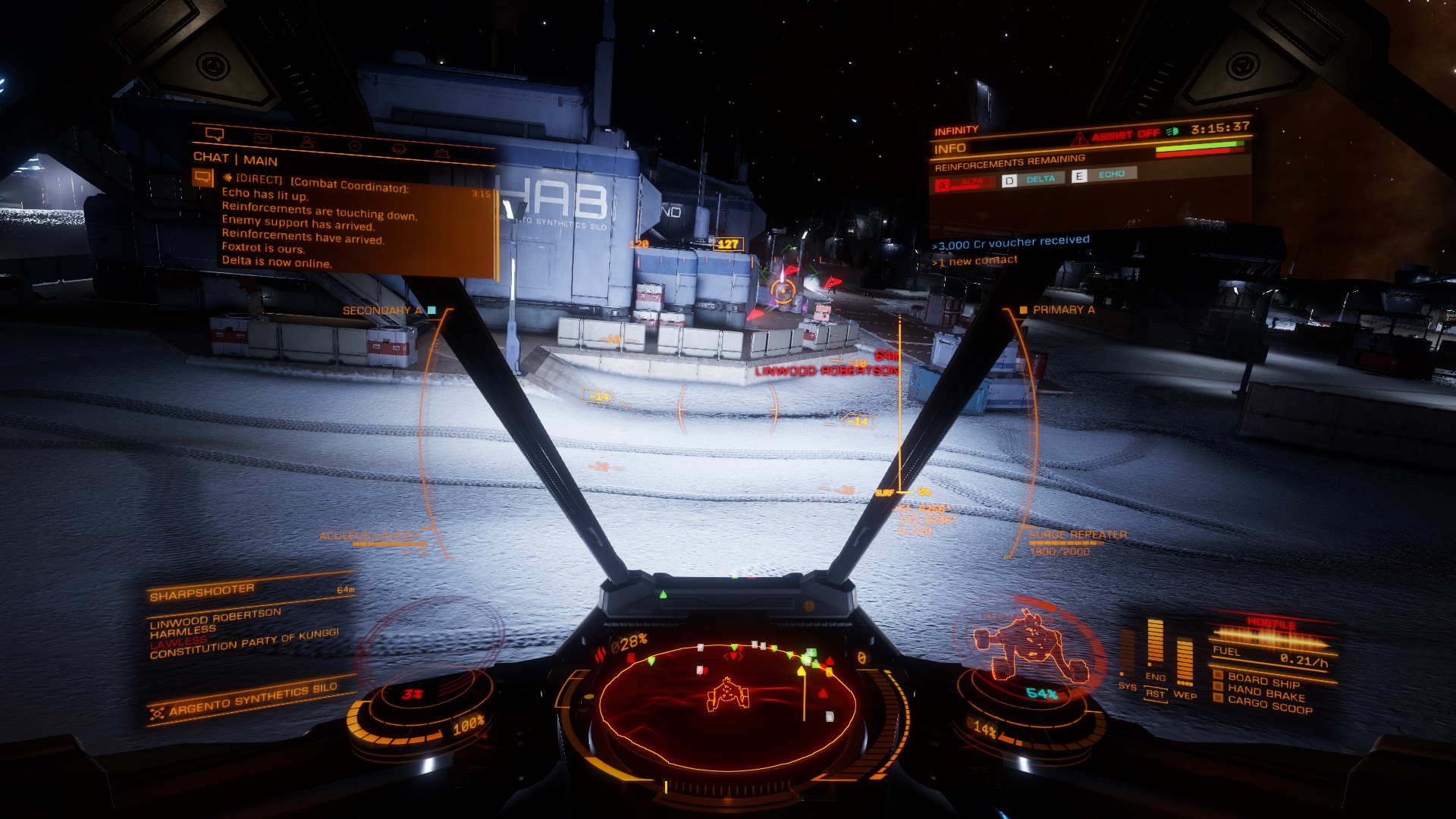 Most exclusively combat-related missions are assassinations on legal or non-legal targets with stealth sometimes improving pay. Most on-foot combat missions pay around one million credits, but some can pay close or upwards of two million credits. As far as the other two branches of on-foot gameplay are concerned, on-foot combat has a slightly higher potential payout than trading or exploring does.

Though it is anecdotal, it is important to note SRVs can be used in on-foot combat. SRV combat uses the same systems of on-foot combat such as missions, combat zones, and payout. SRVs can be used to great effect to decimate on-foot troops. The SRV Scarab is a more well-rounded SRV with equivalent power distribution and a four ton cargo hold. Its drawbacks include only one laser repeater, and lower shield and hull strength. The newly introduced SRV Scorpion is more geared towards combat and includes a missile launcher and a repeater at the cost of both lower hull capacity and weapons-tuned power distribution. On-foot combat missions don't guarantee the ability to use an SRV on the given target. Combat zones, due to their large battlefields, always allow a player to dominate the enemy with an SRV. SRVs don’t necessarily add profitability to on-foot combat, rather, provide a different approach to on-foot combat and combat in general.

Ship-based combat has been a staple of Elite Dangerous since its release and is a fun way to earn credits, reputation, and engineering resources. Due to the multitude of ships in Elite Dangerous, as well as the near-infinite amount of loadout setups for every ship in the game, ship-based combat can be done in many ways and caters to many play styles. Players can choose small and fast ships, big and powerful ships, or anything in between. For this reason, any skilled pilot can take even the smallest and weakest of ships and use maneuverability to kill even the strongest and most overengineered ships in the game.

Just like with on-foot combat, ship-based combat sets damage systems relative to the types of weapons being used. Generally speaking, Energy weapons such as lasers or plasma weapons do more damage to shields than to the hull. Kinetic weapons such as multi-cannons or missile racks do more hull damage than shield damage. It is also possible to target specific systems in an enemy ship once shields are knocked down, instead of the whole ship. Rather than kill a ship, players can disable it and steal cargo, use the ship for bargaining, or disable certain systems one by one making the enemy ship unable to escape or recover leaving it vulnerable to onslaught and destruction. 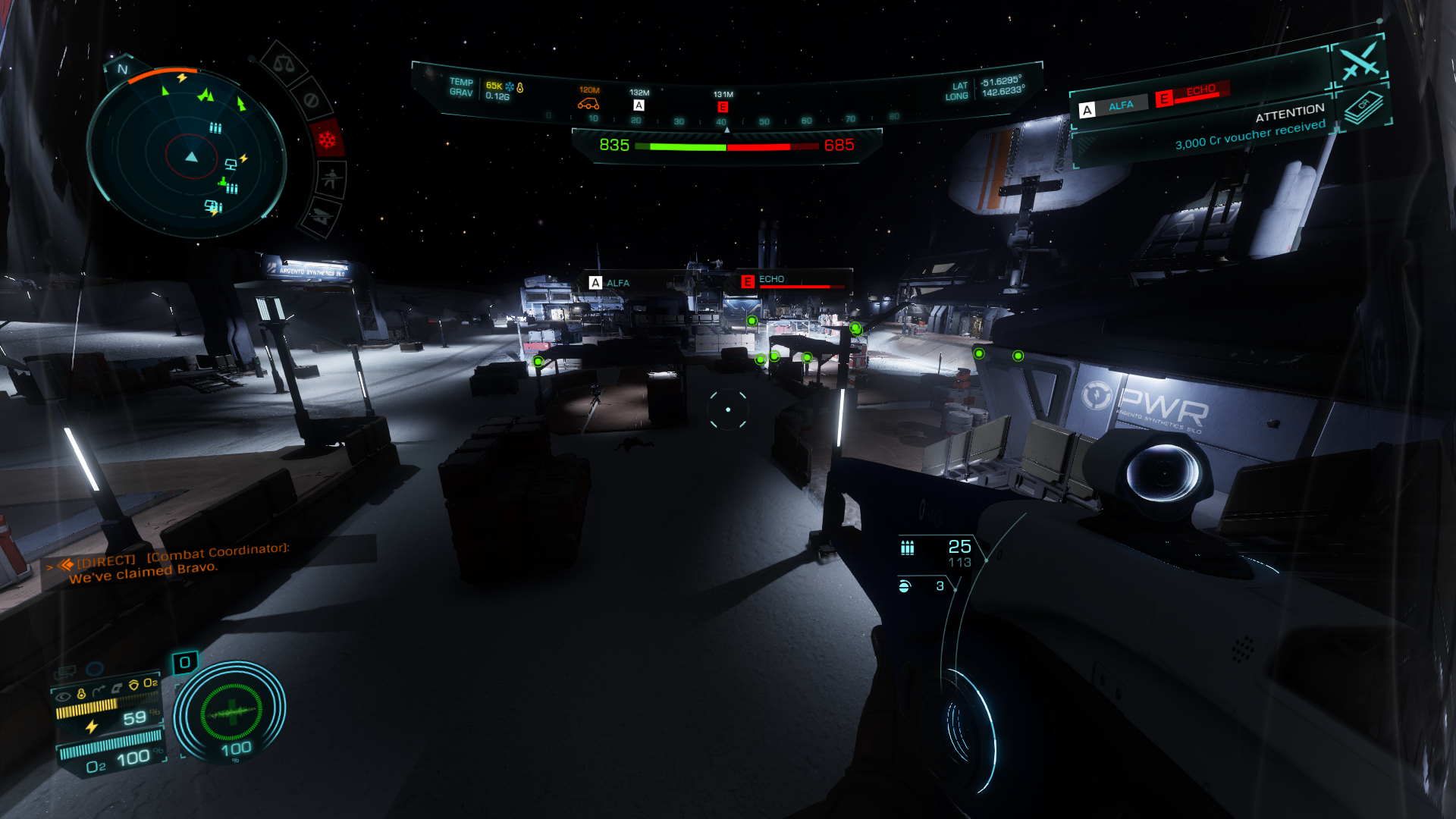 Just like on-foot combat, ship-based combat can be entered by incurring a bounty, bounty hunting, piracy, missions, combat zones, or anti-xeno action. Incurring a bounty can be done through a multitude of methods, the easiest of which is firing on a station, an unwanted target, or system security. Bounty hunting involves travelling to high traffic areas to scan ships, and kill the ones who are wanted for a credit reward. Piracy is illegal but generally involves using a manifest scanner in high traffic areas to search for targets with high value cargo to bargain for or kill for that cargo. Combat missions can be legal or illegal and can proposition a payer to kill civilians, high priority political targets, prisoners, terrorists, pirates, and Thargoids. Similar to on-foot combat, combat zones involve travelling to sectors of space labeled as such, choosing a side, and fighting for that side for credit rewards. Combat zones can vary in intensity from low to high intensity. Anti-xeno warfare involves taking specialized weapons to non-human signal sources and fighting aliens called Thargoids for credit rewards.

Ship based combat, similar to on-foot combat, can vary widely in profitability. The profit, as is always the case with combat, can be net-negative if the player's ship gets destroyed. The profitability of bounty hunting, anti-xeno warfare, and combat zones are very similarly matched. A given commander can earn as little as a few hundred thousand credits or up to tens of millions of credits in the appropriate situation doing these modes of combat. Killing low level bounties, Thargoid Scouts, or participating in low intensity combat can ear players around a few hundred thousand credits per kill, or in the case of combat zones, per win.

But killing multiple Thargoid Interceptors, High level bounties, or high intensity combatants can earn players millions of credits. Piracy also has this varied profit range depending on the pirated cargo. Hydrogen, for example, might actually cost pirates more in supplies and fuel than it’s worth to steal. However, low temperature diamonds, or painite, as well as many other minerals and precious metals, could earn commanders tens of millions of credits per pirate act. Combat missions are their own animal. Some missions can pay a few hundred thousand credits while some missions can pay tens of millions of credits. Usually, low paying combat missions are due to the low priority, level, or volume of the presented enemy, while high paying missions are due to the high profile, high level, or high volume of the enemy.

Combat in Elite Dangerous Odyssey comes in all available forms and can take on various approaches. On-foot combat, while not being as profitable or varied as ship-based combat, makes for a very unique experience compared to other first person shooters. Ship-based combat is possibly the fastest way to earn credits in Elite Dangerous, has tons of  mission variety, a multitude of approaches, and serves as a baseline for on-foot combat. With its relatively consistent design philosophy and adaptability, Elite Dangerous makes for a fantastic and enjoyable space combat experience.