With a flurry of updates, patches, and announcements, it looks like all of our favorite indie devs are back from holiday and hard at work. It’s not just the Indie MMO Spotlight regulars, either, with several of our lesser-seen devs finding their way into the news this week. So let’s quit wasting time and get right to the news with this week’s Indie MMO Spotlight.

Permadeath has always been a topic of debate for the BoT community, and Might & Delight had to turn off permadeath shortly after launch to stop players from losing their characters due to bugs and glitches. Might & Delight revisits the topic of permadeath in a community update on the Book of Travels Steam page, sharing some insight into how they plan to add more depth to a character’s post-death journey.

Chimeraland was released just over a week ago, and along with its first patch, the MMO is already in the midst of its first special event, Snoweve Party.

Since its name change back in July, it’s been pretty quiet on the Cinderstone Online newsfeed. A news post on the Cinderstone Online Steam page assures us the team is still hard at work implementing new mechanics in preparation for Open Beta. In an attempt to be more transparent on the development process, they have released a percentage roadmap to track their progress

Yager Development went on the interview circuit in the latter part of last year. They continued the string of interviews between Twitch streamers and Yager staff this week with a conversation between streamer BlackOni and Oliver “Wayward” Hildebrandt, Live Producer at Yager Development.

Novalogic shared an updated high-level roadmap for Dual Universe this week. The big addition to the roadmap is the Panacea update. Expected to release in the winter of 2022, the Panacea update will provide an improved toolset for beginner and veteran voxel manipulators alike. 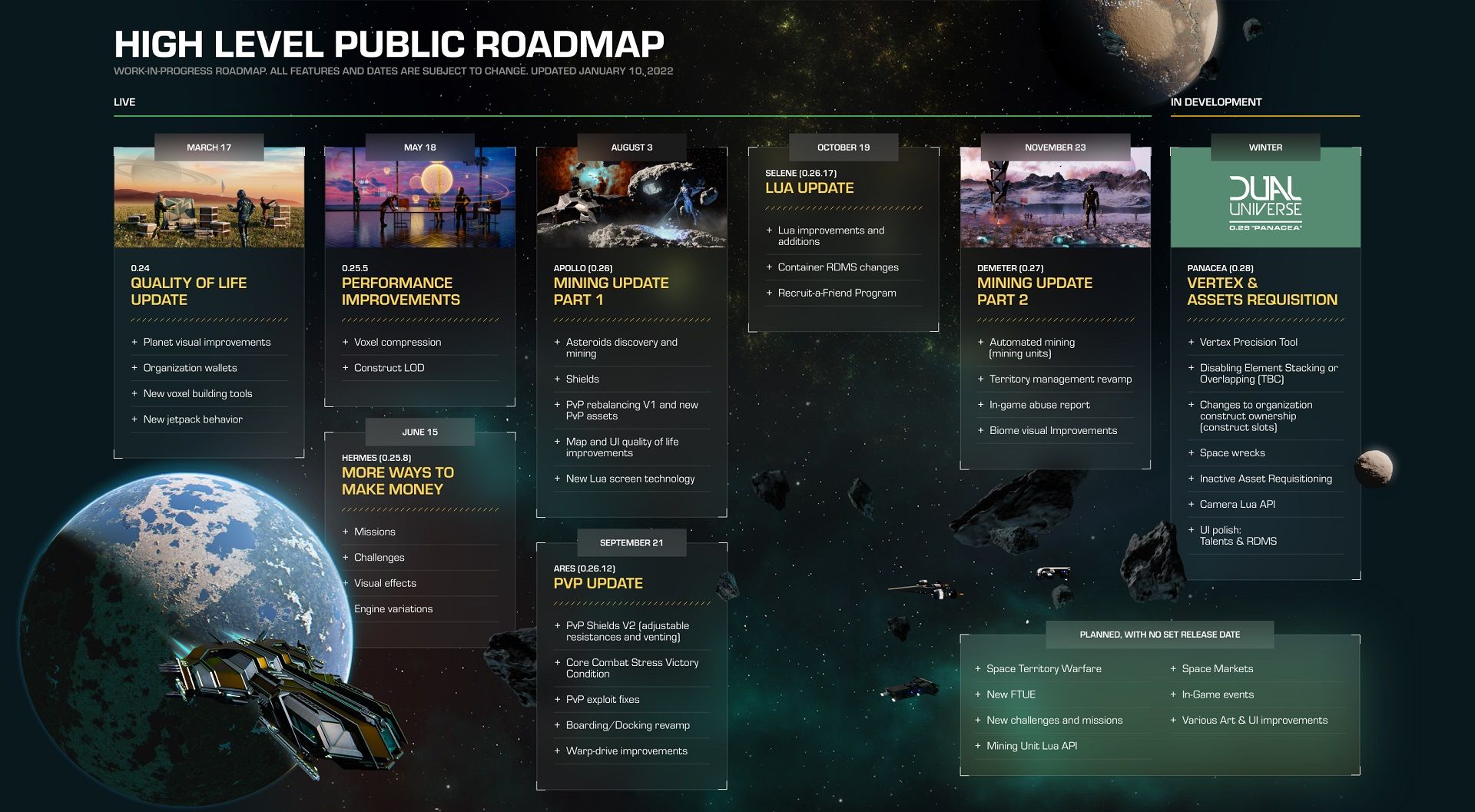 After a couple of months of inactivity, the r/MMORPG subreddit Developer Spotlight had a new entry this week. A niche within a niche, Farwoods is a roleplay enforced graphical MUD inspired by Redwall and Watership Down. A pure passion project that is currently in Open Alpha, Farwoods is free to play with absolutely no microtransactions. There also aren’t any NPCs or PvE content, so if you’re looking for a world where all of the content is driven by roleplay, Farwoods might be the MMO you’ve been looking for.

On Tuesday, January 11, a new war broke out on the Live-1 server. If you aren’t already engaged with the enemy, now’s the perfect time to grab your rifle (or tank) and double-time it to the front line.

The third and fourth installments of Fractured Online’s Feature Spotlight were posted this week. Spotlight #3 covered the Knowledge System, specifically how character progression would work in FO. Spotlight #4 built upon that knowledge by taking a more in-depth look at the different schools of magic and fighting players will have access to.

The Christmas event ended this week, and you have until the new Glory Season starts on January 20 to turn in your gingerbread and sweets for your rewards. And be sure to check out Weekly Update 302 to see all of the QoL improvements and bug fixes the dev team implemented this week.

A new blog post highlighting the new Temple of Ma’at battleground was posted this week. The post also mentions that players will be able to get a cape, cake, and a penguin suit (if you don’t already own it) during the 4 year anniversary event that starts on January 18.

Patch 0.3.3 went live this week, adding a character skill system to Past Fate. The patch also brings with it a plethora of other improvements and bug fixes.

January has been a month full of updated MMO roadmaps, and developer INSANE has joined in with its updated roadmap for Profane. Instead of trying to predict the exact date each item on the roadmap will be completed, each card has a progress bar to indicate how close it is to completion.

Hello, dear community!After taking some time off to get to know itself better, we are thrilled to announce that our roadmap has finally come back!This is what we have laid out in front of us for 2022. So let's get to know it a little better? pic.twitter.com/4MtoeaiAiU

After a short break for the holidays, everyone is back to work. You can see what they are all up to in Development Log #317.

It was relatively quiet on the RotMG blog this week, with only two posts.

Yager isn’t the only developer giving out interviews, with Scars of Honor CEO Venelin taking the time to chat with YouTuber Vulkan on Monday.

Season 4 in the MMORTS Sceeps started on January 15. Be sure to check out the forum post to read all of the special rules being implemented this season.

I’m sure you probably already saw it, but Zenith: The Last City is launching on January 27!