Each week, we scour the internet for all things indie MMO-related so you don’t have to. This week, we celebrate the one-year anniversary of the IMS. Thanks to all of you who have checked in over the last year, and I hope you found at least one new indie MMO that piqued your interest. It’s also summer vacation time so my search for indie news this week may not be as thorough as it normally is. I’ll make sure to double-check for missed news in next week’s column. Well, my plane is about to board so it’s time to finish this column up. Welcome to another year of the Indie MMO Spotlight.

Nothing says survival crafting like chopping down a tree and gathering up the logs to build your first humble abode. A post on Twitter gives us a quick glimpse of what this will look like in BitCraft.

Get your tools ready to build! pic.twitter.com/GfQEpofMOF

If the temperature outside isn’t enough incentive to keep you indoors, Broken Ranks is giving you another reason to stay inside with Dungeon Month. Each weekend in July you can earn extra XP and PsychoXP from specific bosses. Oh, and they had a patch this week as well. 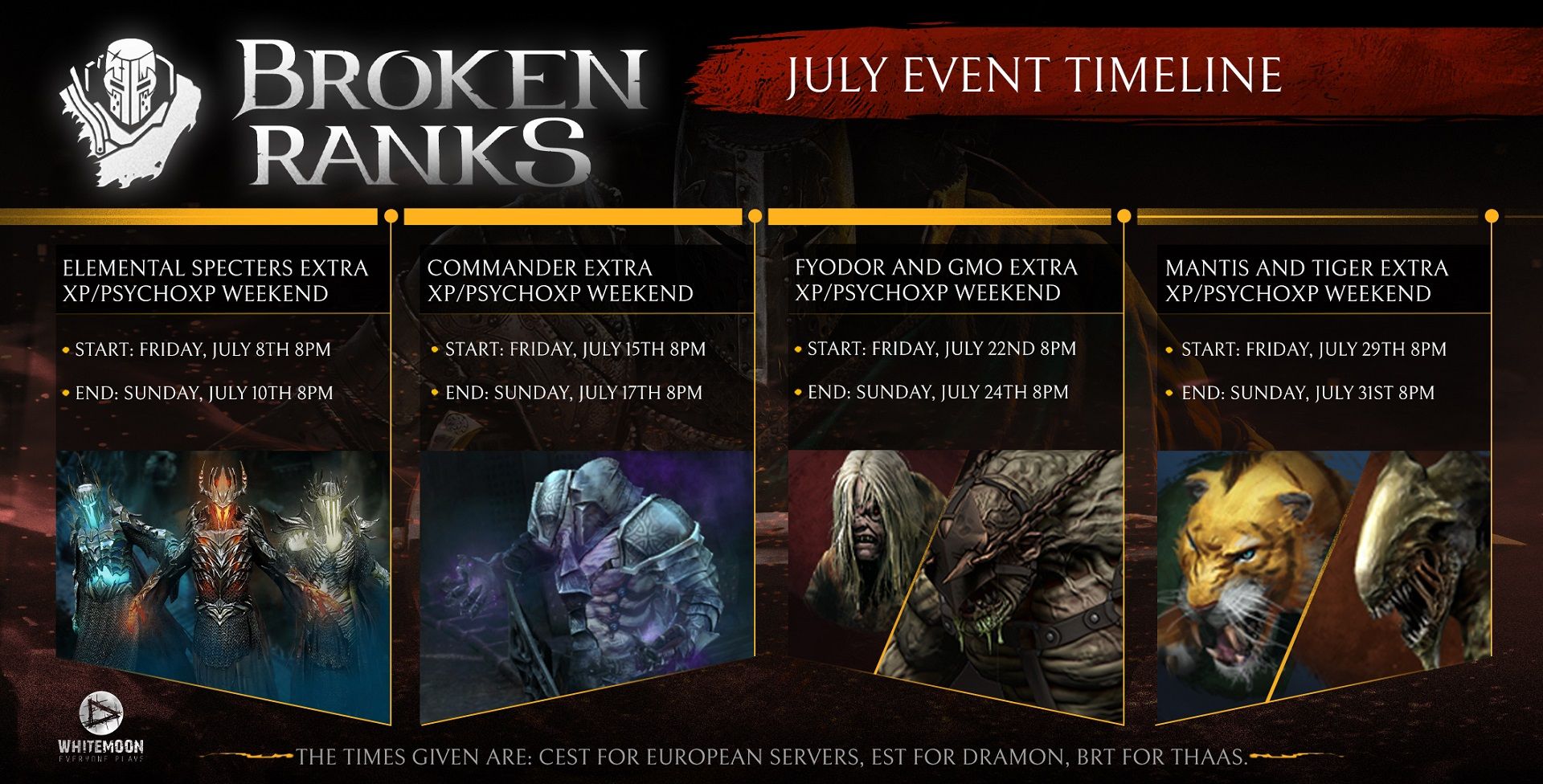 With the global release of Chimeraland set for Friday, July 15th, the Chimeraland Twitter account has been pumping out the tweets all week long, starting with the announcement that the pre-registration for the global launch had passed the 5 million mark on Tuesday.

The Cycle’s weekly patch (1.3.5) landed on Tuesday. Along with a few bug fixes and more tweaks to their internal anti-cheat measures, the patch focused on weapon and combat balance updates. As for the cheating thing, it feels like Yager Development is actually trying to keep the vile scum of gaming out of The Cycle. Whether that is something they can achieve or not is another question, but they did post another dev update video on the subject.

The Spire (patch v28) was released on Thursday. Players can now test their combat skills as they attempt to clear each Spire Floor by defeating 50 elite mobs, unlocking powerful modifiers and rewards as they move from floor to floor.

A new Glory Season started on Thursday. The Glory Season lasts for two months, giving players plenty of time to earn contribution points and fight their way to a top spot on the ranking boards. Weekly Update 325 went live, bringing about some combat changes to feints and blocks.

According to an announcement this week, Legends of Aria will be using a one-token economic model for the relaunch of LoA. Noting that the “traditional dual-token play-to-earn model requires a continual increase in players and cash flow into the economy, but will falter once these numbers stop dropping,” the switch to a single token model makes $ARIA a deflationary currency.

There will also be extended server maintenance that will run from Monday, July 11, through Friday, July 15, as they finish migrating the entire service to a new platform.

It’s time for the monthly M&M devblog, Update 22: Staying Busy This Summer. The update is full of concept art, multiple videos, and a long list of tech and design work completed by the team last month. Read more about it and check out their latest video in our recent article!

In one of their typical Twitter threads, INSANE gave some insight into the importance of ships in Profane. Semisus is a world full of islands that will be grouped together to form regions, and you’ll need a ship if you plan to hop from island to island and region to region.

Oi, community! ??It's been quite a while since the last time we talked about an extremely important subject to Profane: ships! ??Ships will play a key role in Profane, so how about we tell you our plans for them, while you share with us your ideas and expectations? Deal? pic.twitter.com/BKzWx4hmC4

In Development Log #342, Michi talks about base building, Fabian covers his work on ship upgrades, and Nick is still finishing up the current round of Name THAT Planet.

Be sure to check out the latest Ravendawn devblog. It’s all about the recent changes to equipment. The dev team also posted an open position for a Junior Python Developer, so if you or someone you know is fluent in Python, you might want to check it out.

It’s almost time for the Month of the Mad God 2022! Get ready for class reworks, new weapons, and a Battle Pass.

Dwarven lore was covered in last week’s SoH community discussion. This week, the conversation moves on to the lore of the Undead.

The newest weekly devblog post covers even more housing sneak peeks, a rework of the staking page, meeko redesigns, and a bunch of concept art.

Alta Logs #9 is live. This go around, it’s Q&A Session 2 where the team answers a 6-pack of questions from the community.

The WoD July dev update is here, and it shows off a couple of screenshots that are filled with a lot of detail.