Each week, we scour the internet for all things indie MMO-related so you don’t have to. This week, several of our indie favorites got some screen time during the Summer Game Fest. We also had a major release that’s getting a ton of attention from streamers, a new blockchain MMO-lite joins the list, and a couple of our lesser-seen titles popped up on the radar for the first time in months. There’s a lot to cover, so let’s quit wasting time and get started with this week’s Indie MMO Spotlight.

We are getting a follow-up to BitCraft’s lore series, Ancient Journals. Svim the Singer and Rumbagh the Scholar are the topics of the first entry in the new series, Travelers. The companions were first seen in the BitCraft announcement trailer, so it’s possible the duo are NPCs we will come across during our own adventures in the sandbox world of BitCraft.

Chimeraland had its first round of server merges on Thursday with the merging of server 103 with 104 and 105 with 106. Strangely enough, a new server, 120, opened on the same day. 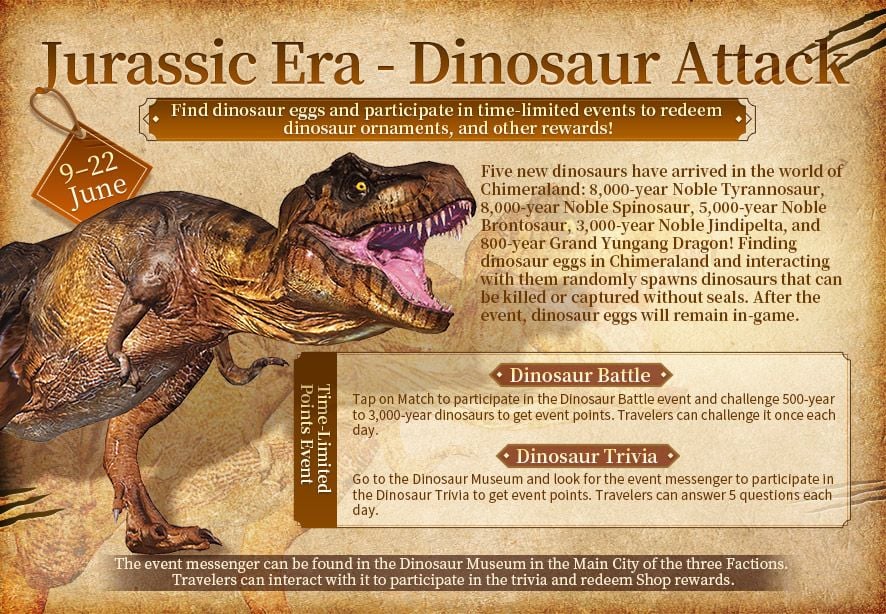 The latest update to Chimeraland also went live on Thursday (it was a busy day), bringing dinosaurs to the world. To celebrate the update, multiple dinosaur events will run through June 22nd.

The Cycle: Frontier was officially released on Wednesday and is available on Steam and the Epic Games Store. The next two weeks will serve as a Pre-Season period, followed by the start of Season 1 on Wednesday, June 22nd. The release caught the attention of several big Twitch Streamers, including Shroud, Summit1G, Pestily, and Sacriel. And you can expect MMORPG’s first impression next week.

Episode 4 of the Ask Aphelia Q&A Podcast was posted to YouTube on Friday. The discussion includes XL Cores, construct disassembly, DACs, and much more. After you watch the podcast, be sure to join in on the discussion on the DU forums.

In other DU news, Creative Director Cyrille Fontaine posted a letter to the community this week. In the letter, he discusses the current state of development (they are doing a lot of polish work), teases some new gameplay features, and gives an update on the question of whether NQ will perform a reset of the universe at launch.

Ember Sword’s asset migration to IMX began on Wednesday. Although most early migrations went off without a hitch, there were some issues with failed migrations that caused Bright Star Studios to halt migrations on Thursday. It appears they have identified and resolved the issues causing the failures and migrations will be resumed on Monday.

Ethyrial was showcased in the OTK Games Exo, giving it a huge dose of visibility this week.

Fractured Online got a big patch on Tuesday. Poison, bleed, and stealth all got a rework, clicking near multiple corpses will now bring up all of their inventories at once, and players now have access to new chat channels. You can see all of the changes and bug fixes in the full patch notes.

I missed this last week, but Galaxies of Eden posted their 5th Devblog on May 30th. The blog post covers the recently launched Account Portal as well as a general development update.

The Genfand Kickstarter has now pushed past $15,000 pledged. With the extra funding, Rose Tinted Games will be adding tailoring and animated spells to Genfanad. Additional character customization and pet support will be added at the $20k and $25k stretch goals.

Genfanad was also showcased during the OTK Games Show.

With Weekly Update 322, Players will now experience longer days and shorter nights in GV. There were also several other QoL improvements this week, including Valley of Death balance tweaks and a balance overhaul for fishing.

Reaper Games CEO Joseph Rubin announced that Legends of Aria would be delisting from Steam at the end of the month. While this makes sense considering LoA’s relaunch as a blockchain-enabled MMO goes against Steam’s current blockchain policy, the crypto-free Legends of Aria Classic will also be delisted.

Legends of Aria also announced its IDO (Initial Dex Offering) would be handled by Enjinstarter. Enjinstarter has a Guide to IDOs that will get you up to speed if you aren’t sure how to participate in the IDO.

Patch version 0.1.20.0 went live this week. You can view the change log on the Mist Legacy Steam page.

There will be a special 2-hour playtest session with the developers on June 14th at 9am EDT. The test is only for players who have never played Project F4E in the past. You can apply for the test session by filling out this Google Docs form.

Project Gorgon received its 364th update this week! The update has a ton of new features and fixes so get your scroll wheel finger ready and head over to the Project Gorgon steam page to see all of the changes.

In Development Log #338, Fabian discusses a few new features that will help ease new players into the universe. Nick also adds to the log by reminding players to check out the Twitch stream they participated in over on Blackboa’s channel.

The Ravendawn team announced that RavendawnDB will serve as the official Ravendawn Wiki. And don’t forget that the Ravendawn Alpha 5 starts on June 14th.

Update 2.3.2 went live on Wednesday. You can find a list of all the changes in this blog post.

Stein World is an MMO that we don’t see very often in the Indie MMO Spotlight, but here’s proof that I still check in on the quiet titles even if this news comes a week late. A recent update to the Devlog covers the work done over the last several months, including class reworks and the addition of the Hunter, Warlock, and Shaman, among other things.

Tatsumeeko has secured $7.5mil in seed funding for its cross-platform fantasy online game. Available on iOS, Android, and Discord, Tatsumeeko is an MMORPG-lite experience that will place the community first. Although Tatsumeeko will incorporate blockchain technology such as NFTs and Web3, players will still be able to play without incorporating the blockchain elements. You can find the Tatsumeeko Whitepaper on the official website.

It’s time for another Villagers & Heroes Developer Livestream. The stream will begin on Tuesday, June 14th at 4pm EDT on the VH Twitch Channel. Viewers can expect to get an update on housing interiors, a sneak peek at upcoming new and revamped side content, and a visit to the Twilight Vale event zone.