Each week, we scour the internet for all things indie MMO-related, so you don’t have to. This week, Past Fate has Alpha troubles, Dual Universe gets a release date, and you won’t be catching them all (or getting a refund) in Untamed Isles. There’s plenty of other stuff going on as well, so let’s quit wasting time and get started with this week’s Indie MMO Spotlight.

Another week, another short video clip was posted on Twitter. This time, we get a glimpse of co-op play, and it looks like it will be like any other co-op experience. I’m not saying that is bad; I just want to see more from Clockwork Labs on what will make BitCraft unique. I’m not alone on this, right?

Will you bring your old friends along, or will you make new ones? pic.twitter.com/KFOVX6MYaP

This week's new dev blog focuses on the story in Book of Travels. While staying true to their original design idea of not holding the player’s hand too much, the team hopes to add more story and lore by adding new item descriptions, encounters, and events. There’s also a new Tech Blog entry (#13) for all aspiring coders. Finally, the devs are also asking for player feedback on the combat system, so be sure to tell them what you like and dislike about BoT combat.

There’s a Twitch Drop event going on now through September 1st. You can get 1000 crowie for watching a drop-enabled streamer for 30 minutes, and then 50 sage at the 1, 2, and 3-hour marks. There is also a 7-day login event running through August 25th. Just when you thought Chimeraland couldn’t get any weirder, logging in daily will earn you a piece of a dinosaur costume. Chimeraland also just launched its latest update, Attack of the Tyrant, which adds some more fearsome dinos to the fray. 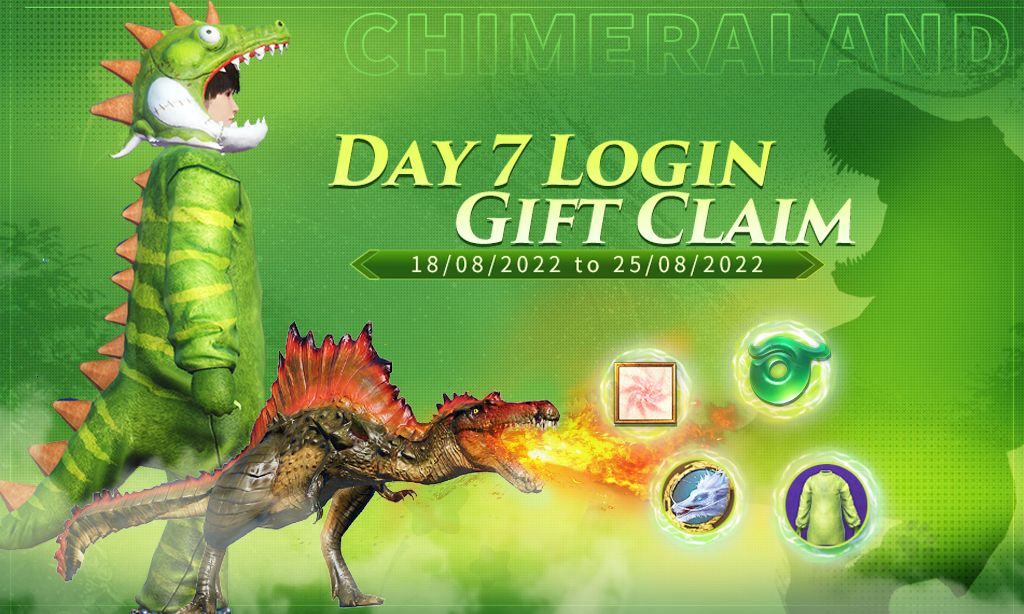 It has been several months since we heard from Cinderstone Online developer Codevision, so it nice to see they had a developer stream this week. Most of the required work for Open Beta is done, with only sidequests and the Fallowglen global quest unfinished (along with the neverending quest to squash bugs). On Monday, August 22nd, there will be another stream on the Cinderstone Twitch channel, where they will show off another dungeon, discuss the siege system, and finish things off with a special announcement.

Patch 1.5.0 went live on Wednesday. You can get the full patch notes here. A live stream scheduled for Monday, August 22nd, will kick off a four-day Twitch Drop event.

It’s official. It was announced this week that Dual Universe would launch on September 27th. And in case you have lingering questions about the launch, Ask Aphelia #13 covers many of the community questions and is available on YouTube.

Fractured Online will enter Early Access on September 15th. There will be a server wipe before the start of early access to give all players an even playing field. In other news, in a new dev video, CEO Jacopo Pietro Gallelli discusses how the team uses in-house tools to create a continent for players to explore.

Andrei Krotkov, aka Heleor, was a guest on the Perceptive Podcast, where he and host Josh Bycer discussed what it takes to make an MMO.

LoA’s Gen Zero mint sale was held on Thursday. The 250-character NFTs sold out quickly at the initial price of 1.75 SOL (approx $64), and some are already back up for resale on Fractal for as high as 100 SOL.

Jandisoft held an AMA on Reddit this week, and those questions have been answered. You can find those answers here. Jandi also reopened the Mad World Founders Pack sales with an additional item - the Test Pass. The Test Pass grants founders access to all future tests, including the upcoming Closed Beta Test running September 15-21.

Patch 0.1.24.0 was released this week. The most notable change in the patch notes is the addition of the market buy option, allowing players to place orders for other players to fill.

The World of the Realmwalkers, the first installment of the new video series Nightingale Journals, delves into the backstory for the upcoming co-op survival game. This is after the announcement that Nightingale would be joining the list of 2022 delays.

After a delay due to the Steam review process, the Past Fate Open Alpha went live on Wednesday. You can download the test client on the PF Steam page. As fate would have it (see what I did there?), the initial release had some fatal error crashes, prompting the team to extend the Alpha by seven days.

Profane Twitter was active again this week, with a long thread giving us an update on their progress with player crafting, specifically their progress on workstations.

What up, community! ??Not along ago, we talked to you about crafting (in case you missed it, we'll share the link at the end of this ?? thread). Today, we want to go further in that subject and present you our progress with workstations! pic.twitter.com/iFXub3M673

The Lurking and Slurping Prologue Season is over, and developer BetaDwarf is asking for your feedback. If you missed this season, you don’t have long to wait for another chance to check out Project F4E. Players will have access to the new Frost Ranger class when the next season, Path of Wrath, begins on September 8th.

In Development Log #348, Michi has a lot to talk about, including the accounting system getting out of control, custom contracts, and ads being placed on local markets. Nick was also busy this week as he tries to figure out how to make Prosperous Universe’s pricing model more transparent to players.

What events are on the horizon for Ravendawn? The roadmap infographic below says it all. 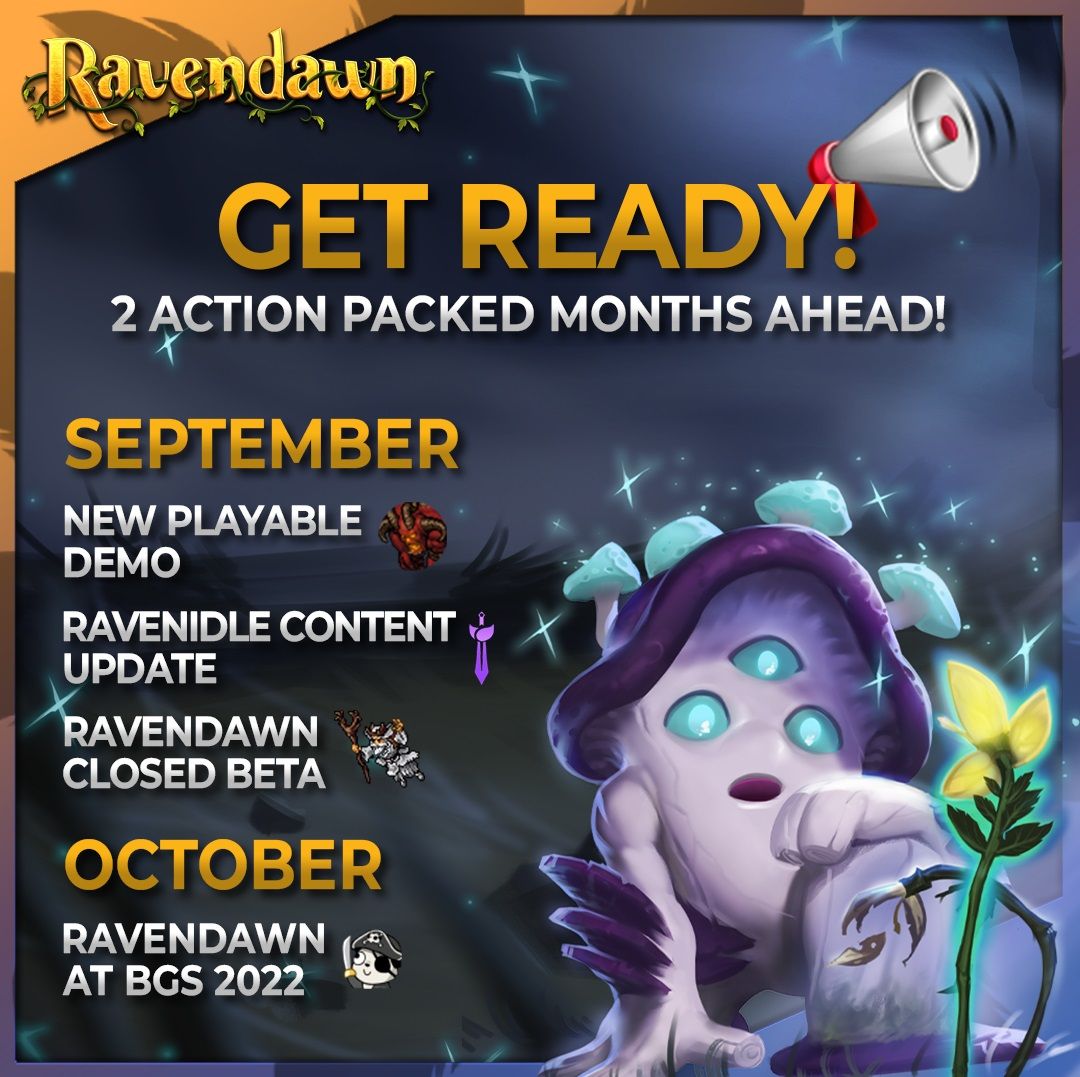 RetroMMO celebrated its 2nd anniversary on August 14th. To celebrate, a small content patch will run until January 1st. That is also the projected timeframe for the complete rebuild of RetroMMO to be completed.

Almost 2 years ago @michaelreeves raided my Twitch page with over 10k viewers, resulting in some of the craziest moments in RetroMMO's history as new players flooded the game.https://t.co/qAFq3TUQMN

Scars of Honor has begun its biggest giveaway ever, with the 1st prize being an Acer Nitro 5 laptop! Anyone who has registered an account on the official SoH website is already entered, and additional entries can be earned by upgrading to a Supporter or Honored account.

Early Access build 911 (update 17.8.2022) is live. There’s no need to send you to a lengthy patch note page since the list is pretty small. Ten of the most common crashes have been fixed, and corrupted moon data has been removed. Short and sweet.

The Tatsumeeko weekly blog mentions one of my favorite MMO staples - fishing. Work has also begun on the fifth and final playable race, the Aldren, plus much more.

Mod Appreciation Day is coming to V&H. Show your thanks to the game moderators and join in the festivities on Saturday, August 27th.

It was announced this week that WoD would be upgrading to Unreal Engine 5.

Minor patch 1.1.8 was released on Monday, adding bHaptics suit integration (and other stuff too) to Zenith: The Last City. RamenVR partnered with bHaptics to give away a Zenith game key and a TactSuit X40 haptic vest to celebrate.