Each week, we scour the internet for all things indie MMO-related, so you don’t have to. This week, Broken Ranks fights for an award, Zenith gets some untold legends, and Dual Universe may not be as good as we hoped. There’s plenty of other stuff going on as well, so let’s quit wasting time and get started with this week’s Indie MMO Spotlight.

BitCraft’s weekly Twitter vignette introduces us to one of the goods players will be crafting.

Broken Ranks has made it to the DevGAMM Game Fest Awards in the Best Desktop Game category. The DevGAMM Game Fest is a new online festival that will take place November 23-25. Featuring over 200 games, the festival will be packed with developer interviews and a Streaming Showcase. Broken Ranks was evaluated by 60 judges and survived three rounds to reach the finals. Good luck to Whitemoon Games, and hopefully, we’ll see you come out on top on November 25th!

It was announced this week that the new content patch for Cinderstone Online will be released on Friday, November 25th. The patch will include chapters 2 and 3 of the game and is packed with two new maps to explore.

TCF was on hand at G-STAR 2022, and attendees had a lot of questions for the staff. Creative Director Dan Banefelt took the time to answer the most popular question in a short video that was posted to YouTube this week.

Weekly Development Release #79 went live this week. The patch included new animations for doe and elk mounts and mobs and a new eagle mob for players to hunt. You can see the full patch notes on the Dreamworld Discord.

Update 1.1 will go live on November 29th. The update includes grid snapping, element recycling, new talents, Steam achievement, and much more. MMORPG posted Joseph’s final review of Dual Universe, citing, “lack of polish, clear direction, or anything really compelling to do,” as just a few of the reasons he gave the space MMORPG a 5.0 (average) out of 10.

V31 was released on Monday this week. The new patch included new cosmetics, the Platinum Emporium. Elethor’s Christmas Event is also set to start on November 24th. Running through December 31st, players will earn one Christmas Present for every fifty combat actions. The presents will contain Christmas Joy, which can be spent in the Christmas Shop to buy all kinds of goodies.

This week, Bright Star Studio posted its Community Year End Wrap Up. To go along with the blog post, BSS also posted a short Pre-Alpha WIP Demo video. gameplay. Although the video is only 45 seconds long, it gives a glimpse at the current state of the game.

The Council of Elysium - Chapter 11 live stream was held on Friday. In case you missed it, you can watch the replay on gamigogames’ Twitch channel.

Genfanad’s weekly patch is full of QoL updates. The patch adds more bank space, right-click PMs, and much more. You can get all the details in the patch notes.

Weekly Update 342 is full of QoL updates and bug fixes. A new Glory Season will begin on Thursday, November 24th, and players will be thankful for the new balance updates in the new season.

Another round of invites to the Closed Alpha Test was sent out this week. Unfortunately for the masses, only approximately 500 of the 40k+ applicants were selected this round, but there are plans to add more players in the future.

A new chaos dungeon, Plateau of Apophis is coming to OrbusVR on November 29th. The new dungeon will feature three new lower-level monsters and two bosses featuring new mechanics that will focus on teamwork and timing.

Palia had a Player Labs playtest this weekend. The Player Labs weekend has a much smaller scope than the month-long Alpha Tests held earlier this year, with the team wanting to get feedback on just a few specific features and experiences.

Patch 0.4.1 went live this week. A new optional tutorial quest, an expanded world (some parts are still a work in progress), and some crafting upgrades are but a few of the features included in the patch.

It’s turkey time in Project Gorgon, thanks to a new update. And high-level players will be thankful that this update brings a new dungeon: The Boss Gauntlet.

The Ravendawn team will be having a Livestream on November 26, 2022. 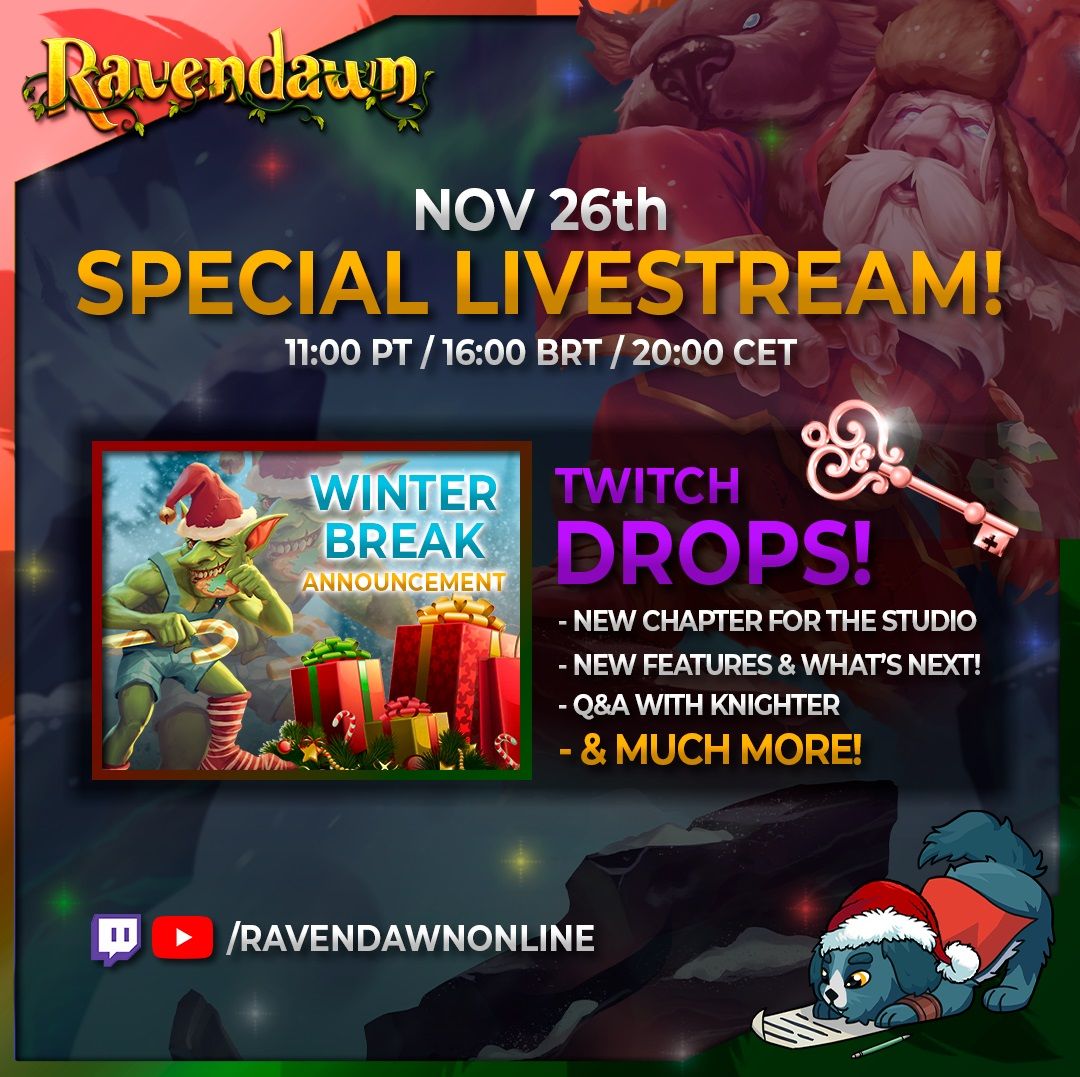 Another week, another Weekly Update.

The Legends Untold update is live, and PSVR2 pre-orders for Zenith: The Last City are officially open.