If you were surprised by the revelation that Guild Wars 2’s new content, Visions of the Past: Steel and Fire, plans to drop as early as March 17th, you are not alone. In a move that had many scratching their heads, ArenaNet has decided to take players back to season one, with new perspectives, and some old content, spit-shined and brought to the forefront to be played again. Could this be a signal of what we may expect in future updates, and if so, is this really what players want?

For anyone that has followed this column for any length of time, you may know that I notoriously admonish balance updates soon after they go live. I’ve decided to demur another balance article in favor of one that truly has me scratching my head. A new content update is entering the field nary a few weeks away, and it takes us back to the season that started it all. Guild Wars 2: Visions of the Past: Steel and Fire gives you the opportunity to go back, play content as Ryland Steelcatcher, see story content as you never have before, and replay missions from season one that have not been playable up to this point.

I’m of two minds when it comes to the release of this new set of content. As someone who found many of the Season 1 events enjoyable, I do actually look forward to stepping “back in time” and reliving some of those missions.  Most notably, the Tower of Nightmares was one of those events that gripped me. I recall skipping through a maze of traps and enemies, alongside other players who wanted nothing more than to make it to the top.  Unfortunately, events such as the Tower of Nightmare does not seem to be something I can expect to see again. Instead, it seems we’ll be taking a jaunt back to some story missions that have not been available up to this point.

Guild Wars 2 is in a precarious situation. The Living World has created, at least in some cases, circumstances where, if players miss the content of that time, they miss it entirely.  These, sometimes catastrophic, events do change the game, and give Guild Wars 2 a world that does feel like it has the ability to change. Allowing players to go “back in time” and experience some of these missions and events is a pleasure, for both new players that may have missed that entire era of the game, and veteran players looking for a different experience, or even for nostalgias sake. 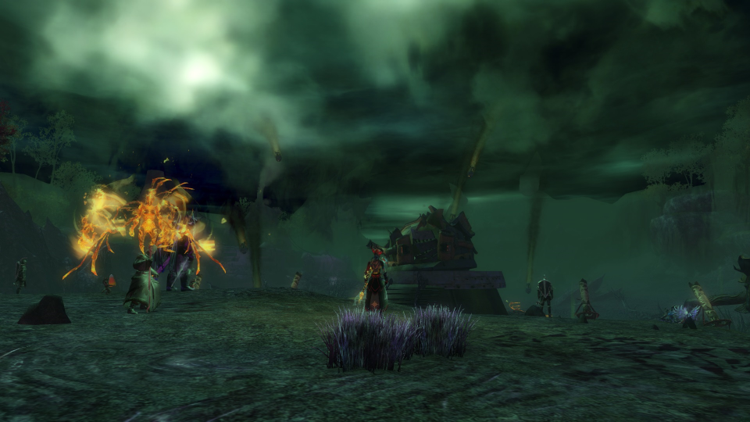 On the other-hand though, the premise of recycling missions is a slippery slope to me. We have experienced a tremendous load of content over the years, and not all of it is accessible right now.  If we are opening a door to the past now, what is to stop ArenaNet from rehashing additional content throughout the course of development later on? Yes, there is content that I’d love to experience again, but not at the expense of content meant to push the game forward into new and exciting territories that we have yet to explore.

Perhaps there is nothing to worry about. It is entirely possible that this ode to the past doesn’t signify that Guild Wars 2 would prefer to tread on older assets, rather than explore regions of Tyria players have been clamoring for in droves for the greater part of a decade. Time will truly tell what ArenaNet is thinking. Regardless, with new weapon skins to earn and a really awesome looking Runic Armor set on the rewards list, it does seem that outfit collectors like myself can’t say no this time around. As for the greater picture, I can’t say that I would be all that excited to see nothing but rehashed, retold content for the foreseeable future. This announcement more than some others of recent memory has certainly left me wondering what content is left to come down the pipe.