After the multi-day rollback Guild Wars 2 went through this past weekend, ArenaNet has vowed to make things right by giving away mount selection licenses and a communal boost bonfire. With aesthetics being arguably the pinnacle of the end game experience, this week, we’re taking a look at some of the coolest mount skins available in the game currently.

For those that have the Path of Fire expansion, obtaining mounts is a big part of how players get around and interact in the game world. In addition to mounts being added to the game, it seems like ArenaNet is happy to oblige players that want to customize their mounts to their heart’s extent. New skins are added almost monthly, with seasonal mounts returning on special holidays. It may not always be easy to get the mount skins that you want, as some are only available during special events, but here is a list of some of the coolest mount skins that have caught my eye. 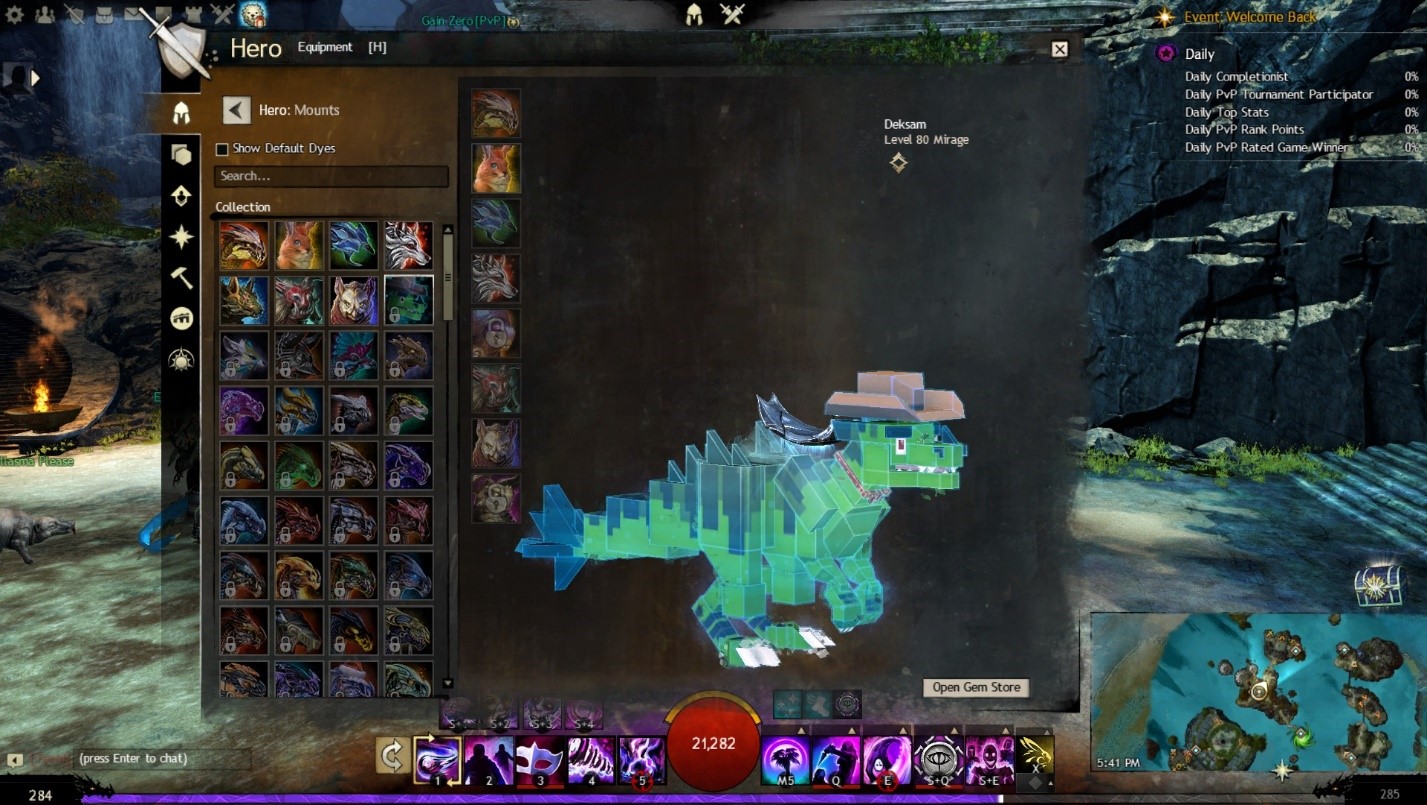 The Super Adventure Box is a yearly event that brings more than just retro gaming to Guild Wars 2, it sometimes brings really cool skins to weapons and mounts. The Super Outlaw Raptor skin is one of those strange, gimmicky skins that somehow generically appeals to gamers of all kinds. It’s quick, jagged movements, and strange pet like demeanor is as endearing as it is ridiculous. Even if the raptor wasn’t entirely pixelated, how could anyone resist a dinosaur in a cowboy hat? 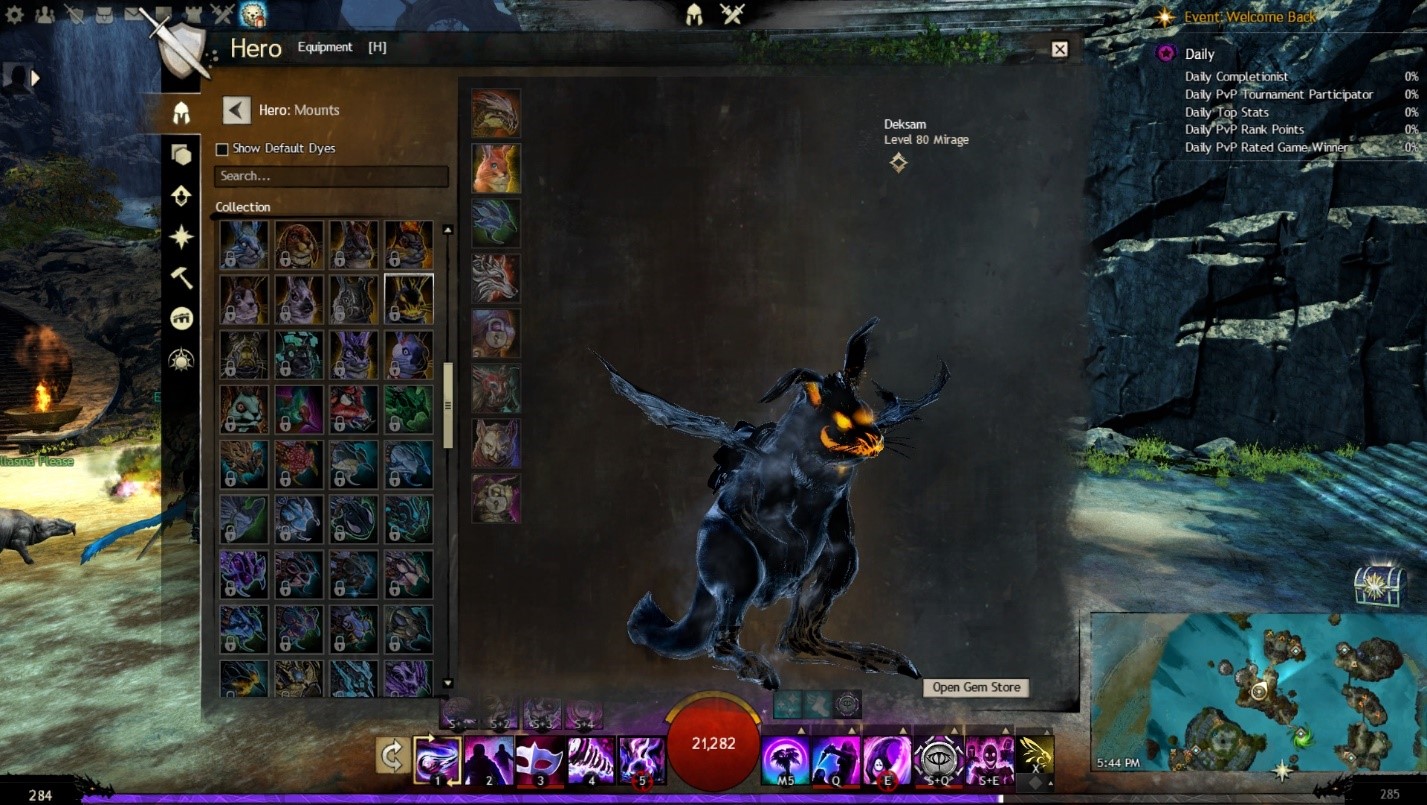 The Shadow of the Mad King event brought forth a pack of mount skins that is perfect for the Halloween season. The signature flaming skulls and black bodies are reminiscent of the Mad King himself; whose head looks like a flaming Jack O Lantern. This skin is available for all of the original mounts, and as you can see from the picture, this takes a generally cute bunny and makes it look fearsome and mysterious. Perfect for someone who wants to roleplay a dreadful necromancer! 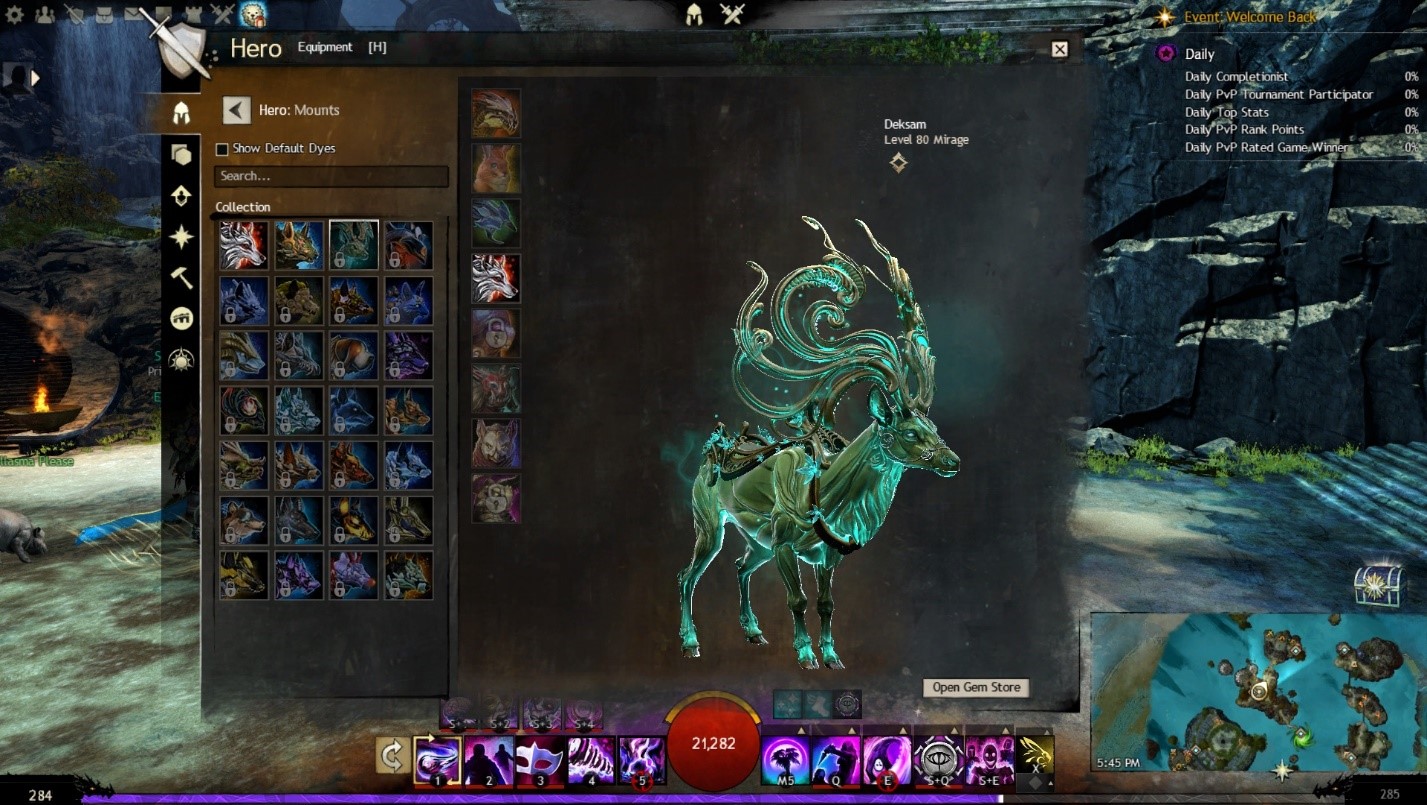 Some of my favorite mount skins in the game are ones that transition one of your mounts into an entirely different animal. The Primal Spirit Jackal skin takes the feral canine jackal and turns it into a powerful looking Deer Spirit. In addition to the cool looking mount, the entirety of its footfalls, and movement mechanic are different than the Jackal mount as well, which makes it one of the coolest mounts in motion too. 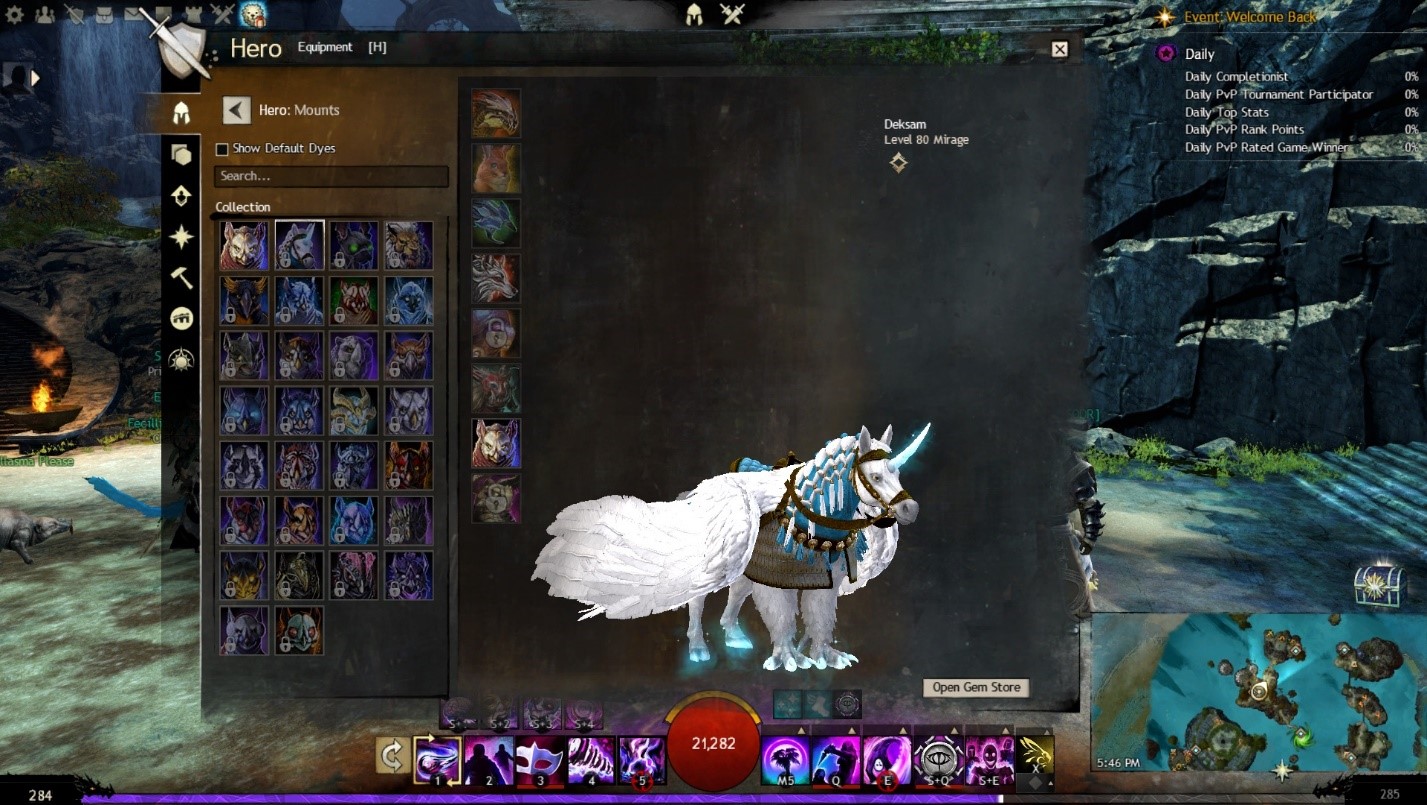 The Sacred Pegasus Griffon skin is, in a word, ridiculous. Yes, it looks like a very weird, small unicorn. Sure, it has a glowing horn and glowing hooves. Yes, when you ride it, you may even feel a little bit like a princess. All that being said, it’s hard to not indulge in the outrageousness of a winged unicorn in a fantasy game like Guild Wars 2. Even a princess needs a trusty mount. 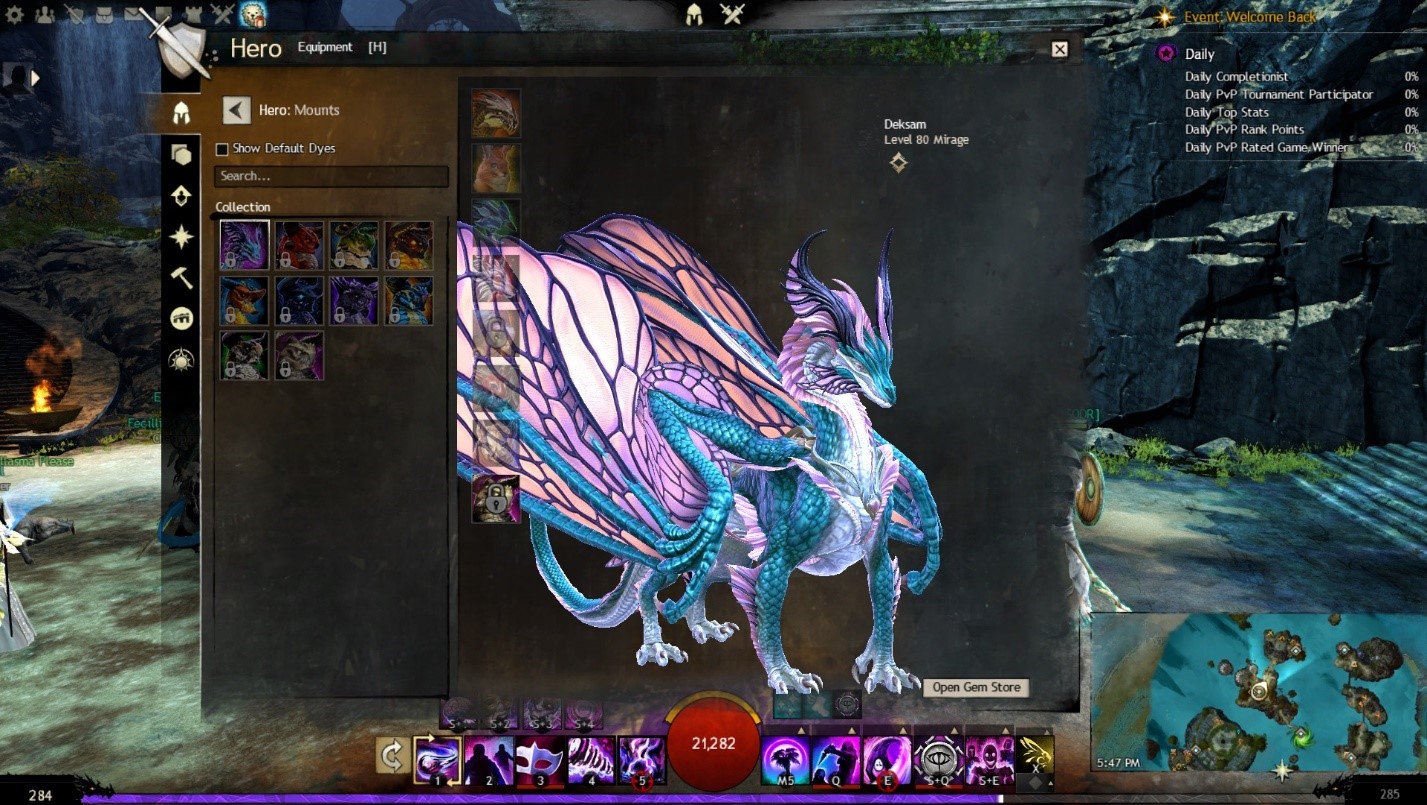 If you are one of those players that put in the work to unlock the legendary Skyscale mount, you may be interested in the Shimmerwing Skyscale Skin. With wings that look like a butterfly, the Shimmerwing skin is both majestic and elegant. I don’t often see this skin around in game, but it is probably the coolest Skyscale Skin out there in my opinion.

Did any of your favorite skins make the list or are there skins out there that are your favorite that weren’t listed? Feel free to post pictures of them in the comments!