This list was originally published way back in 2010. Guess what? Of the five games listed, only one ever made to launch, and it's already shut down. Take a trip down memory lane with us, as we look back at those games, and forward at 5 new MMOs on the horizon.

This one's not even confirmed to exist, but it's all everyone in and around the industry keeps whispering about. The next Diablo installment from Blizzard is rumored to be a massively multiplayer Action RPG, and one that will likely be on consoles as well as PC. Will Blizzard unveil what's to come from Tristram and the Lord of Darkness in 2018? Here's hoping.

Announced at this year's G-Star, NCSoft seems to be rebuilding Lineage Eternal from the ground up to make it more in line with what players were expecting from the Lineage IP. A massive Action MMORPG with loads of enemies, siege battles and more puts the game more in line with what we expected when LE was originally unveiled in 2011 (that long ago?!).

It's no secret that the dev team behind WildStar is working on a new game. What is a secret is just what that entails. It may not be an MMO, but as fans of WildStar, we're all kind of hoping it is. And we're hoping it has as much pluck as the underappreciated denizens of planet Nexus.

This is a big one coming in 2018. Though the road to launch has been incredibly rocky, Neowiz is comitted to bringing the massive sandbox/themepark hybrid MMORPG to the West on their own. It's currently undergoing sweeping changes a la Final Fantasy XIV, and should have an early access launch in the beginning of 2018. What do those changes entail? That's what we hope to find out soon. 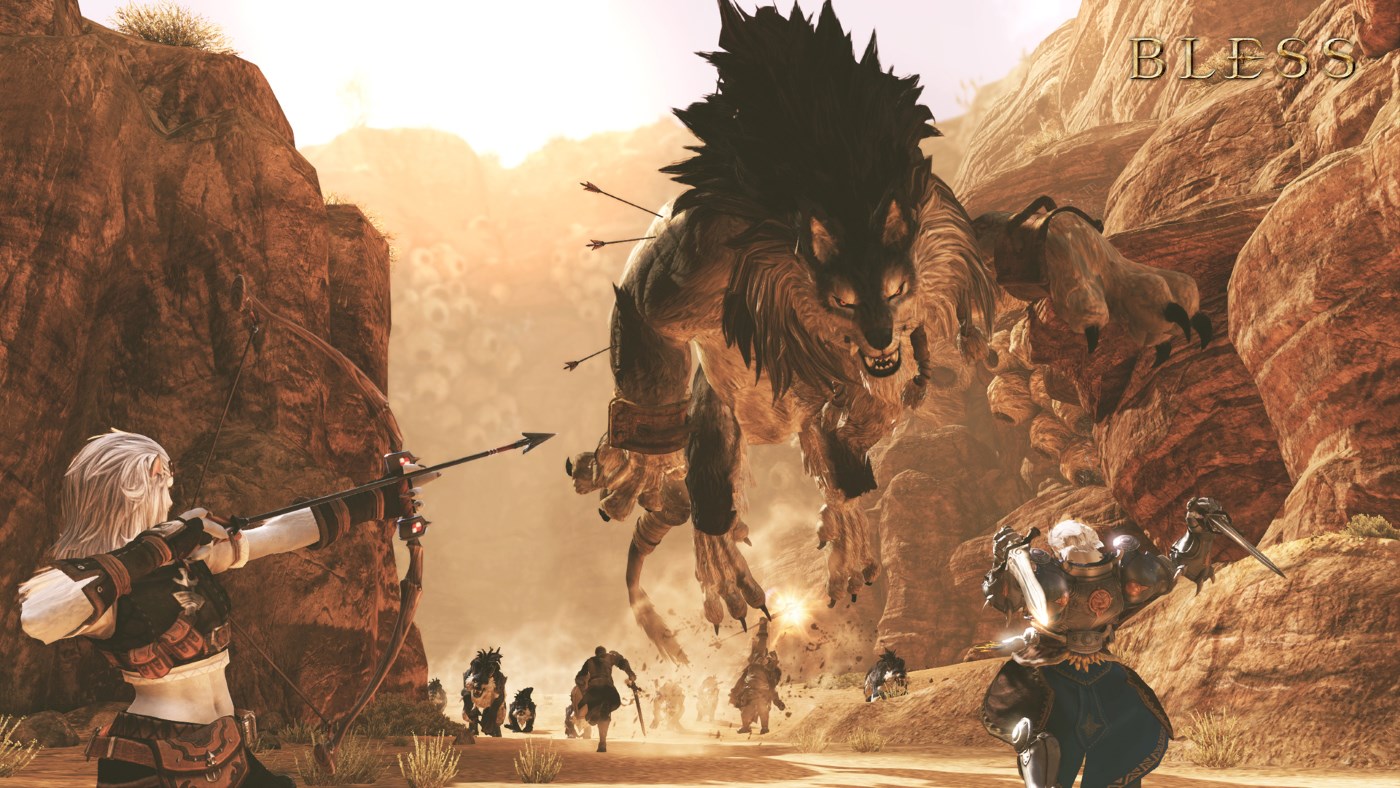 Bluehold Studio was once a developer on the ropes. Devilian underperformed, and TERA could only carry it so far. Enter PlayerUnknown's Battlegrounds. The rest of 2017 is history, and now Bluehole has the funds and momentum to go big with a brand new MMORPG set to release in the west next year. We've played it at G-STAR, but there's a whole lot left to explore. Consider this one one of our most wanted in 2018.

Added because I'm an idiot and completely forgot about New World, which really should be on this list over the "Mythical Diablo MMO" that is rumored to be in the making. We know this one is packed with MMO industry veterans, that it's set in a historical macabre fantasy world, and that it'll involve livestreaming and viewer participation in some insane way. And no, it's not another survival game, at least that's what we're told. The words being used by folks who've seen it? "A legit MMORPG." Here's hoping 2018 brings more info.

These high profile games are great for the industry in that they attract a lot of mainstream gaming attention, but bad in that they tend to swallow up a lot of the smaller titles in their wake. These lesser talked about games may be pushing out plenty of information (or in some cases maybe not), but due to any number of reasons it seems as though you rarely hear much about them… and we wish that wasn’t the case. Though assuredly many of the following titles are just quiet because there’s not a lot set in stone yet, that doesn’t mean we can’t wonder what’s to come. In the interest of giving the little guys more of a spotlight, here’s a list of games we wish we knew more about and why.

Have your own thoughts on the titles listed below, or think we missed a few games at that? Let us know by leaving a comment!

This isn’t exactly a small project. Some extremely big names are tied to Curt Schilling’s 38 Studios, not the least of which are creative masterminds like R.A. Salvatore and Todd McFarlane. When three big names like this, not exactly known for their ties to gaming, band together and begin work on an epic MMORPG it’s hard not to take notice with piqued interest and not a small hint of trepidation. We’re beginning to see the shape of their MMO form in the single-player RPG Kingdoms of Amalure: Reckoning. Though perhaps a tad cliché at first glimpse, it would be unwise to write off an epic RPG experience led by the creator of Elder Scrolls III: Morrowind and Elder Scrolls IV: Oblivion. KoA: Reckoning should set the tone and scope of the MMO, so players interested in seeing what kind of MMORPG Curt Schilling and his mercenary team of developers can come up with should keep an eye on the upcoming 2011 release. The fantasy theme may be well represented in the genre, but it can always be improved upon, and there’s no doubt that this is what 38 Studios is hoping to do. JGE went dark not long ago when the title missed its original intended release date and much of the game underwent significant reworking. As Scott Brown told us, the game just wasn’t quite where they wanted it to be and they wisely decided to err on the side of caution and go dark for a while, giving the team time to collect their thoughts and approach the design from a different angle. Now with a distinct focus on three-faction warfare, massive battles, and an ever-changing landscape (space-scape?), JGE is once again making its way towards release. And yet, there’s still plenty left to be discovered about how this Wind Commander-esque title will play. How much emphasis will there be on PvE and PvP? What about crafting? How will the economy work with the three factions? With a beta expected to ramp up this fall, I’m sure it won’t be long until a lot of these questions and more are answered.

With one of the more curious projects on the horizon, Undead Labs is a studio that was formed precisely to create a persistent online MMO for consoles that’s all about surviving the zombie apocalypse. There’s little to no details yet released about the studios Zombie MMO, but the team isn’t completely inactive when it comes to posting on their website. In a June post, one of the developers goes to great lengths to discuss how his team will dispel the theory that a console MMO can’t really work and cleverly (or heavy-handedly I suppose) uses the “strikethrough” to show that people once said the same things about console FPS games just ten years ago. In the post we’re told that there will be a real focus on hand-to-hand combat (chainsaws, crowbars, etc.), destructible environments, vehicular combat, freedom of movement, and of course social tools for the players. But these serve as a sort of bullet-list of things one should hope to expect in a post L4D or Dead Rising gaming world. What will really be interesting is when Undead Labs starts showing us just how their game is coming together, and how it will work as a persistent online offering. Red 5 Studios, who was recently bought by Chinese developer and online game operator The9, has been kicking around for a couple of years now, quietly developing their first MMORPG. And that’s actually about all we know. Back in 2007 the newly founded company even hunted down blogger Tobold to discuss possible job opportunities. But other than some vague concept art, all we know is that the guys and gals are working on an MMORPG that will reportedly be in some ways both action-oriented and geared towards a more casual playerbase. That basically means it could be anything, if you ask me. But if their homepage is to be believed, I’m sure we’ll finally know a little something more about their mysterious project in just about month when they show up at PAX in September.

Vigil Games, makers of the excellent Zelda-like Darksiders, finally gave gamers something to drool over at this year’s E3 when they showed the first footage of their Warhammer 40,000 MMO, Dark Millennium. From the footage, one can deduce that there will be a heavy focus on gunplay, cover and flanking mechanics, and that organized groups should do well in PvP. We know that both the Order and Destruction sides are represented, and that there will obviously be a huge slant towards competitive gameplay. But developers also stated that the usual MMO trappings will be present, such as NPCs, cities, an economy, and so on and so forth. And while that’s all well and good, there was little revealed about how the game will actually play. Vigil Games will be making a serious appearance at Gamescom in Germany soon, however… and maybe then we’ll get some real meat on this dark and gruesome MMO.