Two evenings prior to its release, I returned from MAGFest, where I had a blast and gave a presentation of a tier ranking of every song on the Final Fantasy 14 soundtrack, which ended with a sing-along to “Measure of His Reach.” A cough developed into worse symptoms, which I’ll later find out is actually Influenza A, because I am a fool who didn’t get the flu vaccine. I’m sleep-deprived already, then increasingly hopped up on that flu symptom super-mix pill stuff as the week goes on.

With this on top of a job search, I am hoping, praying that patch 6.3 is decent, because my entire sanity for the week, and possibly the month, hinges on some baseline enjoyment of this new content. I know that’s a lot to put on Creative Business Unit 3, but after a mostly-successful 2022 as I documented recently, I have faith in the team that accidentally super-buffed the last raid series with its two extra weeks of development time.

The good news for most is that this article is being written and published in some capacity, meaning I survived, to the dismay of some. But you get this trash pile of an introduction as a result. Yay?

(And while we’re here, please get your seasonal shots.)

In “Gods Revel, Lands Tremble”, the former Scions continue their objectives in Garlemald, where they delve into a mountain village. Nothing terribly climactic occurs - we face a few enemies, send some Voidsent back - but we get a bit of development from Zero and some understanding about the motivation behind current Void-realm matters.

Without spoiling much, I think Zero has become a bit of a controversial character, as her simplicity and lack of worldly knowledge carry over into this patch. It’s the best and most questionable of what’s made Final Fantasy 14 characters memorable, with characters leaning into their tropes heavily, either admirably or annoyingly, depending on your perspective. I personally enjoy Zero, as it’s refreshing to have a character with quirks that swing on the extreme scale of out-of-place, and she affirms FFXIV’s sandbox approach to its wider lore concepts, but I wouldn’t blame anyone for finding her grating.

On the other hand, the gods of Myths of the Realm continue to be suspiciously warm and friendly. It’s a really good thing that they’re designed well, and that the raids are genuinely gorgeous and fun, because I’m not getting much reason to care about the pursuit of godly knowledge. I mean, sure, we’ve been wondering about them for over a decade, but it’s just really odd to be confronted for just sport, and not even have that fully clarified as a primary motivator. Not that I don’t love the gods and their designs!

Overall, MSQ is pretty solid, and it feels like we’re leading up to bigger things. We’ve definitely got a big confrontation coming, sure, but with the 6.X patch series being new content, there’s a sense that something else far bigger than even the Thirteenth is simmering ahead.

I’ve recently realized that Final Fantasy 14 has a lot of moments that pivot entirely off vibes. My favorite to point out is the Amaurot dungeon, which is kind of unbearable except for the whole sad-apocalypse story thing, and Doma Castle, which is just dull and highly-saturated without the background music up until the last boss. And Endwalker’s base dungeons are fine, like, just entirely bearable.

I know I’ve said this about the prior updates, but I can safely say that the patch updates all push back against that problem really nicely throughout the primary combat content. In 6.3, the content continues to challenge and entertain at an appropriate level, never sacrificing challenge for aesthetic intrigue.

It may almost feel like cheating to say that about borrowed Final Fantasy 4 designs by way of the Four Fiends, though it looks like we finally get a fully-rendered version of Rubicante previously unseen? But the battles around each of the Fiends is engaging, with the Battle of the Four Fiends remixed once more to stunning effect in 6.3 and the environment and attacks giving clean clues without being too dull.

And with the gods… well, Alliance Raids aren’t easy, but Euphrosyne is a fun choreography that looks great when pulled off well, as with any Alliance Raid. Just make sure you turn down your teammate’s effects, and don’t get too thirsty over your current opponent. It’s hard, I know.

On top of the primary post-Endwalker content, we got a lot of quality of life updates that have been mostly appealing to all sorts of players. Paladin got a major overhaul, which has been bringing in decent feedback; not flawless, from what I see, but there’s nothing wrong with it as far as I know. In the art of game balance, that’s a solid minimum goal to reach.

It also looks like Island Sanctuary has some major updates, which I wouldn’t know how to address because I have the attention span of a two-month-old puppy, and as much as I pledged to do it as part of my new year’s resolutions, that means I still dunno how it was before. Tell me in the comments? Maybe? 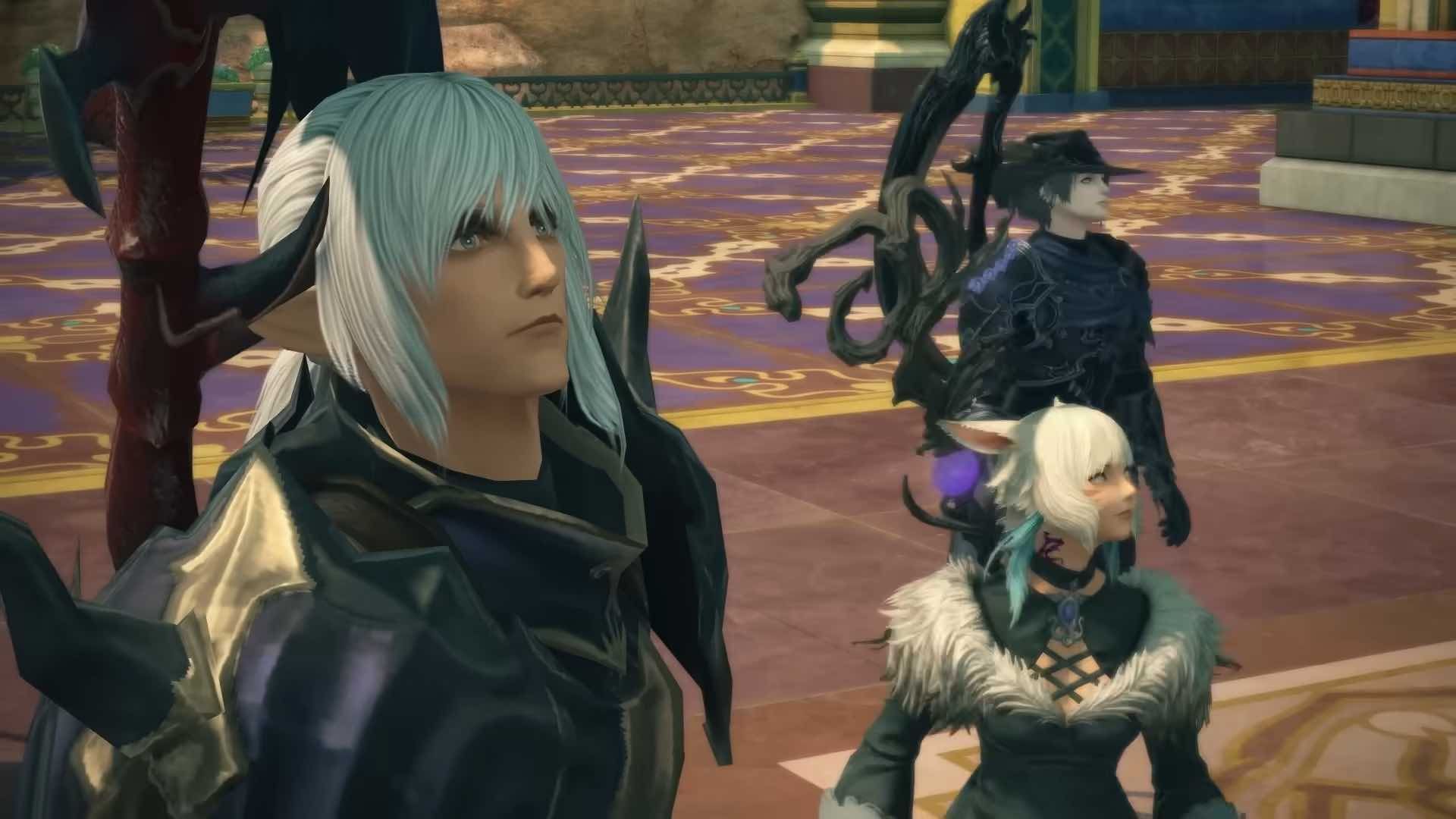 I did, however, get into Crystalline Conflict, which meant I got to try the new Hingan-themed map. As a recovering MOBA addict, I’ll address my CC thoughts overall in another column, but… Folks? I dunno how I feel about this map. It might be too much. Like, way too much. Or a bit? It’s definitely somewhat more distracting than I’d hope from a game mode where nobody on my team remembers there’s an objective still.

And speaking of player content, why are the portraits broken? If you change one (1) item, the whole system breaks down on you. In a game where “glam is the endgame,” one would hope that the glam showoff feature would be released with a lot less fuss for players that are constantly, you know, changing their glamours. It seems to be the fact that it’s linked to gear sets, so technically it’s a six-click fix, but it shouldn’t require a fix at all. I’m hoping this gets mended a bit for the next patch.

The rest of the patch seems to be hits, minus the usual “oh god the server and/or ten things are broken” conundrum that comes with nearly any patch in any game. I feel like I read somewhere and forgot to bookmark that they’re aware of this becoming a thing, but it’s still annoying to have to dip out of what I was doing at 1:00 AM for it.

Oh, and entirely to brag, but my static got all the way through the new Treasure Map.

Is It Time To Hop Back In?

You know what? Sure. Yeah. Resubscribe, especially if you dropped off after Endwalker’s launch.

I say this now because there’s well more than $15 worth of content to do since the base game ended: three dungeons, two trials, and two major segments of two raid series should be more than enough to delve into for a bit. And honestly, it’s all perfectly good.

Plus, you’ve got plenty of new sandbox stuff to do: two Treasure Maps, Island Sanctuary and its quality-of-life improvements, Crystalline Conflict, and a bunch of stuff to craft. Housing’s demolition timer is up, and there are six new districts, so if you really wanna make money, now’s a great time. And hells, I’m probably missing stuff.

More than that, I’ve noticed the game’s livelier than ever. With everyone coming back after major releases like God of War: Ragnarok, Vampire Survivors, more of Destiny 2: The Witch Queen and the full release of World of Warcraft: Dragonflight, many have shown back up in Eorzea to do… whatever it is people do here. Plus, I’ve noticed a minor influx in new players in general, possibly from a post-holiday boredom itch, which is always a delight.

I’m not gonna say it’s better than ever, but if you were thinking about joining again, it’s definitely not a bad time to join at all.

If you’re hopping back in or already gave some stuff a try, what’s got you most excited?