One of the most popular endgame grinds in Final Fantasy 14 is the acquisition of high-end weapons that are released with each patch. The Resistance weapon is the latest in this pattern, and it’s seeing some pretty high popularity. For one, Shadowbringers brought in massive populations of curious and excited players attempting to tackle endgame content.

There’s also the intrigue of the Save the Queen storyline, which addresses disparity in both Bozja’s history as well as the Garlean army. The storyline includes the Bozjan Southern Front duty, which is a massively-multiplayer PvE battle instance packed with group duties, plus gameplay and cosmetic rewards. Two exciting large duties, Castrum Lacus Litore and Delubrum Reginae, are also locked behind the other quests and duties. 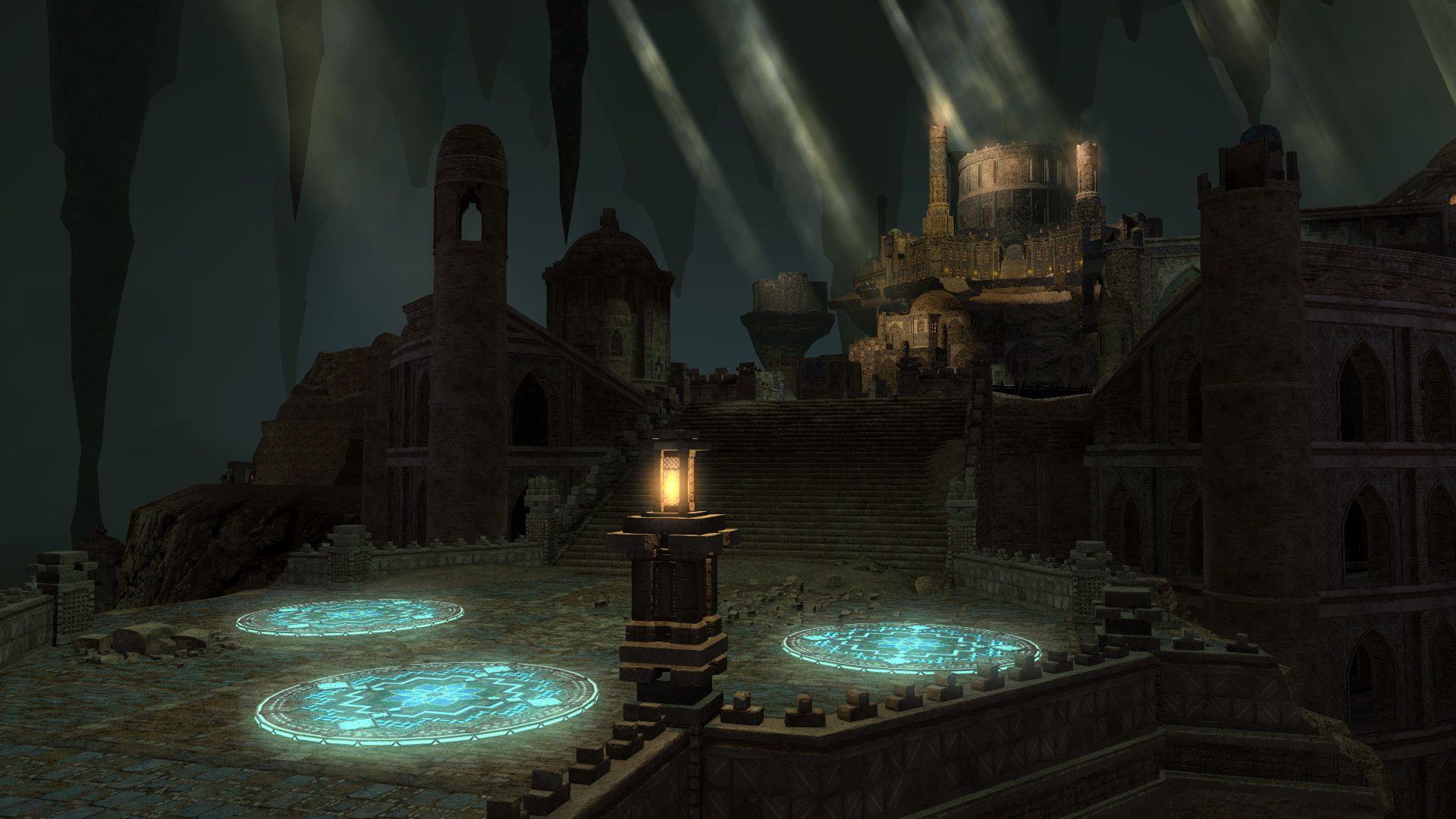 While many players closely followed the Resistance weapon questline upon each release, patch 5.45, the second release patch for this content, confused a lot of players. Further, players hit quite a few “bottlenecks” in grinding for the Resistance weapon, as well as proceeding in the Bozjan Southern Front.

In a Letter from the Producer Live, director Naoki Yoshida, on behalf of the development team, addressed many of the common confusions. He also provided a light outline regarding what’s to come for all of this content.

There’s quite a bit to go over, so let’s get right into it. And if you’re curious about other 5.5 updates, we have the biggest news from the Live Letter covered for you.

FFXIV are quite a few confusing steps and requirements at the moment for the Resistance Weapon storyline. Therefore, Yoshida took some time to clarify some of the present requirements.

For one, there are actually certain steps that only need to be completed once per character — not once per job. Specifically, “The Resistance Remembers,  This confused players the most, as it’s marked up as a non-repeatable quest. But frankly, it’s also one of the more frustrating steps, so there was some potential relief in the confusion. 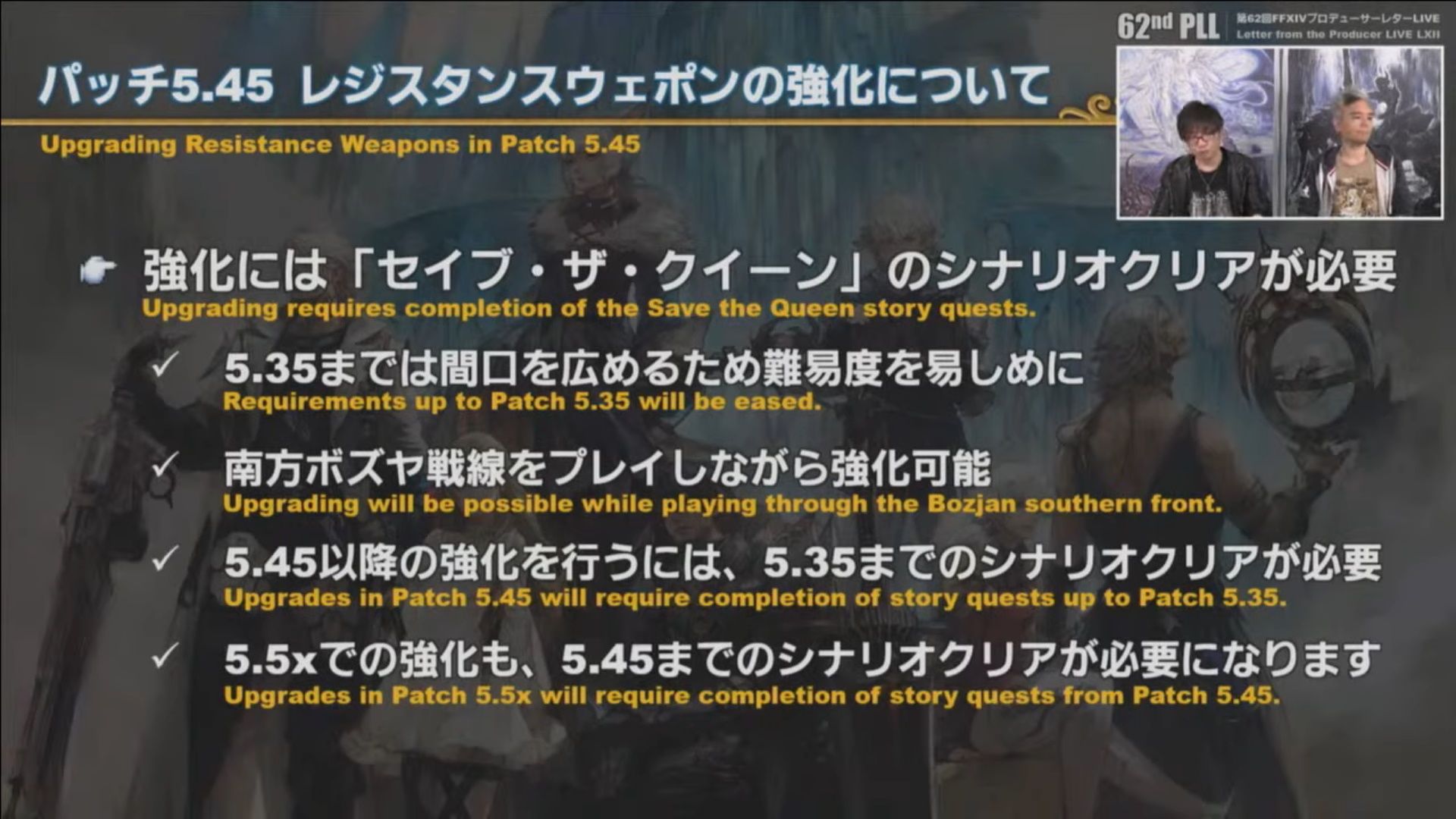 No, you do not need to do “The Resistance Remembers” more than once. This means that you only need to gather “haunting memories” and “vexatious memories” once, and then you’re done.

As a recap, none of these steps are done in the Bozjan Southern Front itself. “Haunting memories'' are acquired through the Void Ark raids (Void Ark, Weeping City of Mcach, and/or Dun Scaith), as well as through random FATE drops in Fringes, Peaks and Lochs in Gyr Abania. “Vexatious memories” are acquired through the Ivalice raids (Royal City of Rabanastre, Ridorana Lighthouse, and Orbonne Monastery), as well as Ruby Sea, Yanxia, and Azim Steppe in Othard. All of the above raids are not only less-frequently visited, but also known for being more tedious, especially with a lack of level 80 toolkits. 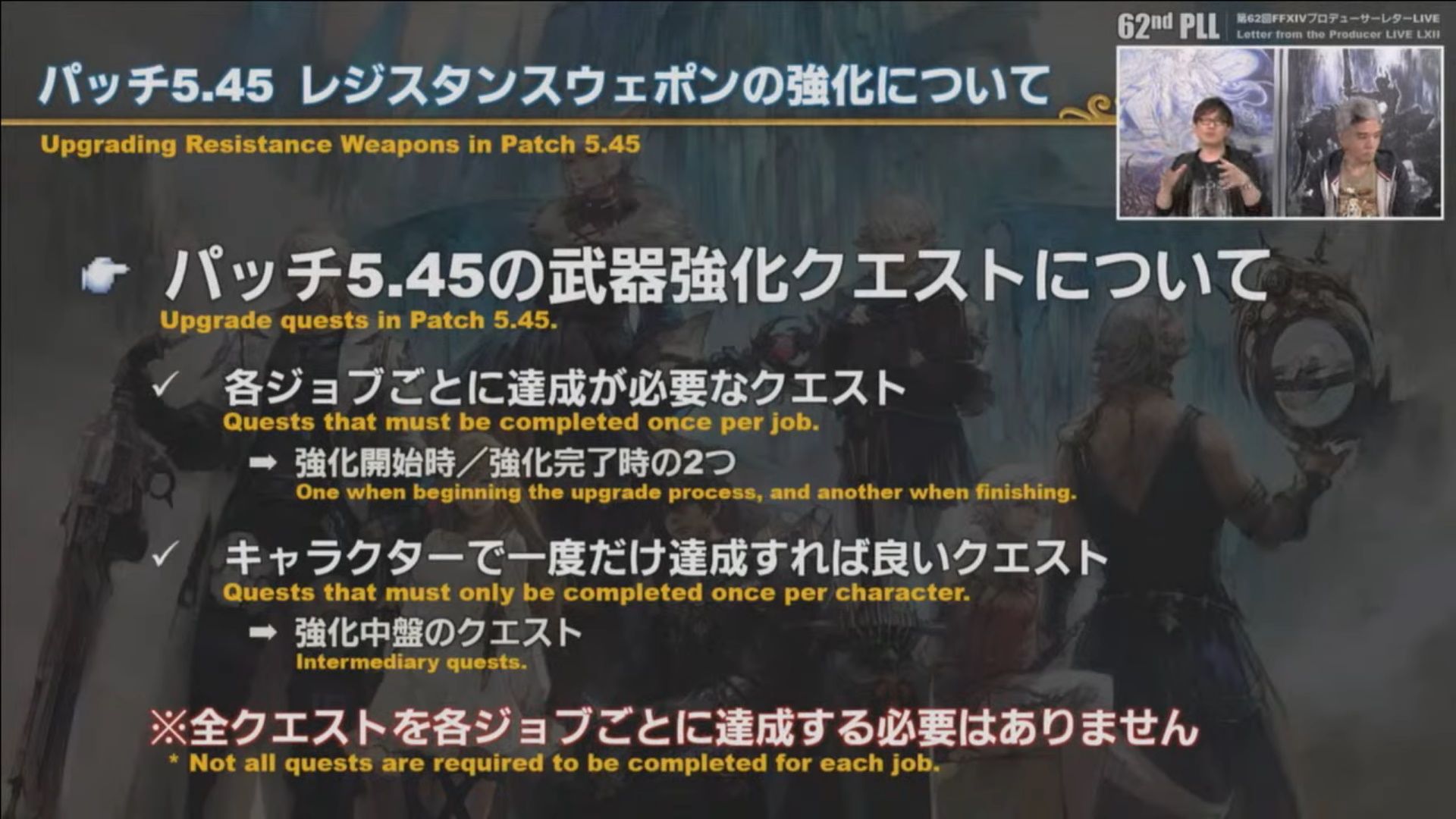 In the wake of all of the new weapons requirements, many players, again, have expressed frustration with certain points in the process. While Relic and Resistance weapons aren’t actually supposed to be easy to obtain by any means, there are certain points that remain common obstacles for players. 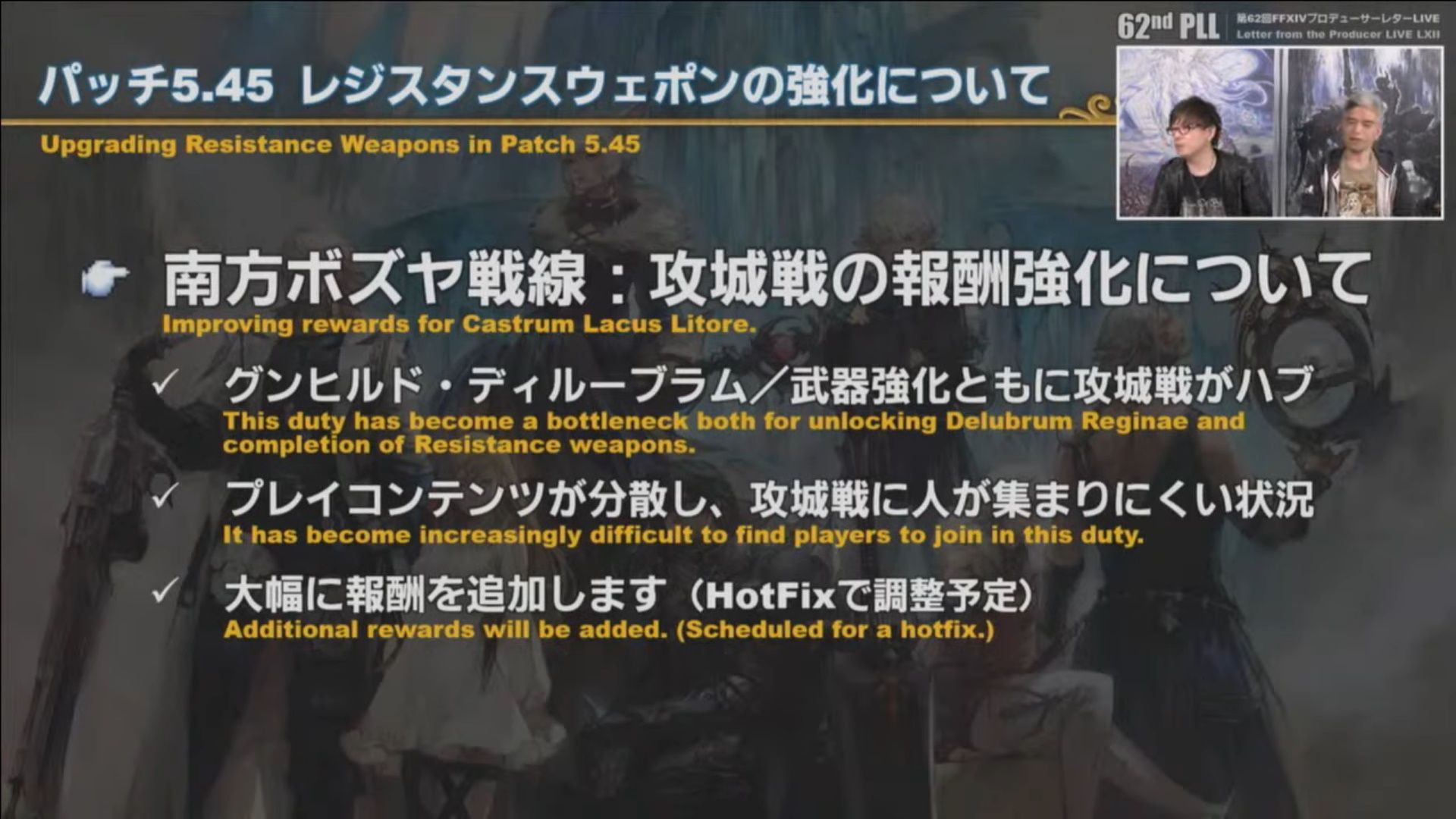 Castrum Lacus Litore, the first “large-scale engagement” within the Bozjan Southern Front, appears to be the primary “bottleneck,” as Yoshida and the development team put it. Quickly after its release in 5.35, players finished the duty and jumped ship from Bozja, leaving newer players struggling to find groups to complete the duty.

During the Live Letter, Yoshida acknowledged this and noted that there is a hotfix coming to help make Castrum Lactus Litore, and thus the Resistance weapon grind, more viable and enticing. For now, though, Yoshida recommends teaming up with other players. In English-speaking databases, the effort does seem to be somewhat-coordinated — if somewhat tricky, due to low interest. There are many Discord servers around right now aiming to gather timed parties to take on Castrum Lacus Litore in order to help newcomers (and grinders) clear it. Until the fixes, this will likely be the best solution.

Note that, likely to the dismay of many players, Lacus Litore will not see difficulty adjustments. It appears that the developers wish to focus on the intent of the instance, which is to have a challenging large-scale activity.

The developers also acknowledge the heavy utilization of non-Bozjan grinding methods, such as FATEs and dungeons, for certain steps in the process. This, in turn, also makes it less viable to grind in Bozja and do group activities such as Critical Engagements. Yoshida claims the team is looking into ways to adjust the process to address this.

It’s good that the Lactus Litore rewards are getting resolved sooner than later, and not just because of the bottleneck and grinding issues. In fact, it’s likely in everyone’s best interest that these fixes are coming given the upcoming requirements for the Resistance Weapon in 5.5. 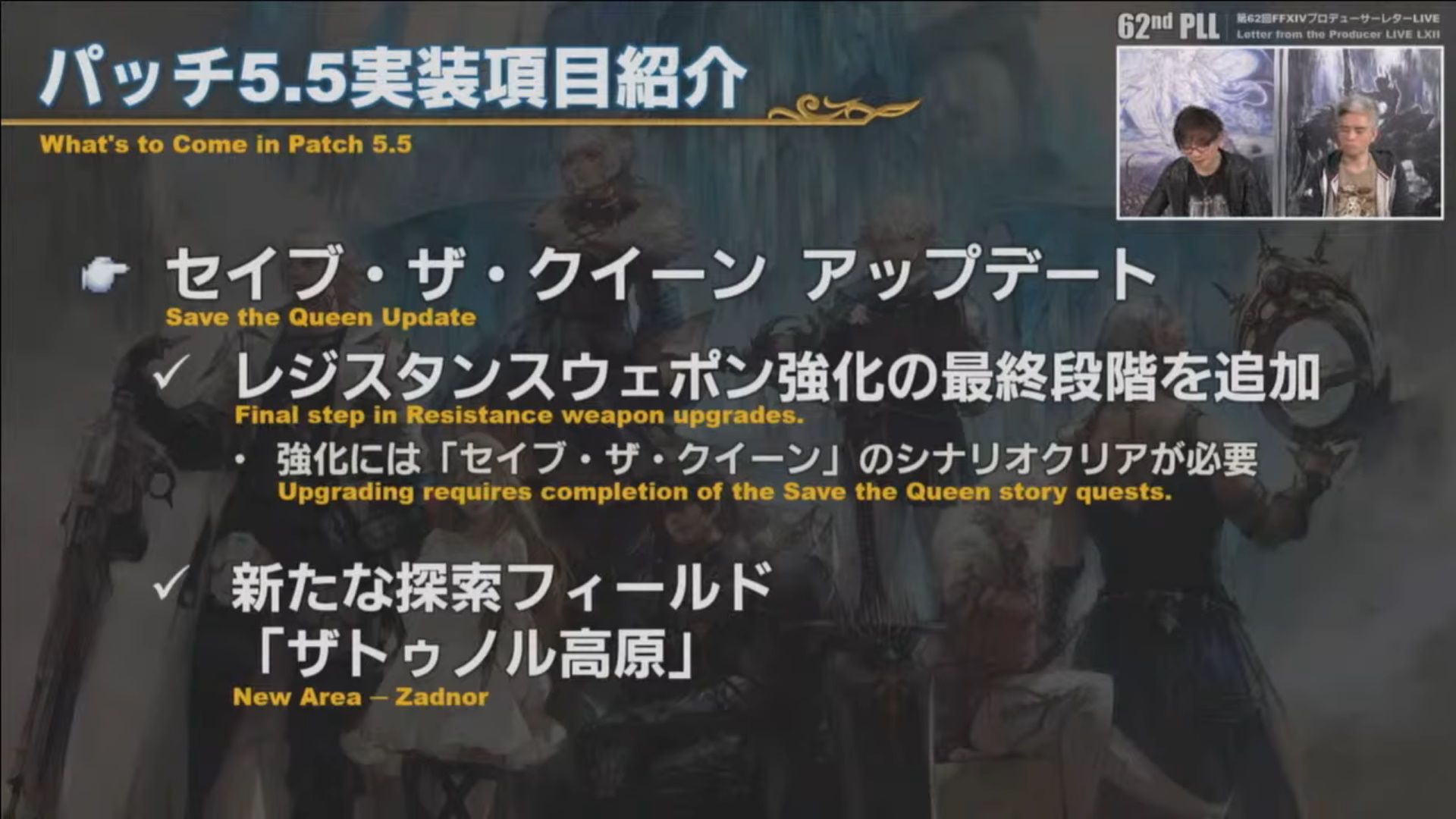 In 5.5, all parts of Save the Queen will become mandatory in order to proceed with each Resistance Weapon’s upgrade stage. Yes, the entire storyline — Castrum Lacus Litore and Delubrium Reginae included. This means if you haven’t completed parts of it, now is the best time, while the crowds are still fresh.

There’ll also be a new area for the Resistance storyline, titled “Zadnor.” There’ll apparently be some “popular enemies,” and the development team claims it’s going all-in to make this a good experience.