Another few whirlwind months have gone by for Final Fantasy XIV players since Endwalker’s release (it’s August already!?). And on August 23rd, there’s going to be a new giant patch update, which means it’s time for…

Yes, I know what’s what you’re all waiting for, and I can’t blame anyone. Everyone from traditionally “hardcore” players to story-only lovers have been waiting for the game mode as part of Patch 6.2. It’s already been described as being influenced by the biggest farming simulators out there, especially Japanese ones like Harvest Moon and Animal Crossing.

Still, the full patch has plenty of cool new stuff. Unfortunately, it’s aptly named “Buried Memory” because it’s going to get buried in the memories thanks to everyone playing yet another farm sim. We gotta talk about what else is coming, though, right? I mean, someone worked on this, and at least someone’s gonna play it before we all vanish from each other’s sights.

With a new major content patch comes a new major chunk of story. For post-Endwalker, unlike other expansions, these are introducing a new storyline, with the same characters but dealing with new subject matter. For those who’ve been interested in the Void - which is a lot of you, you precious edgelords - we’ve been shown in no indirect terms that this storyline deals directly with it. 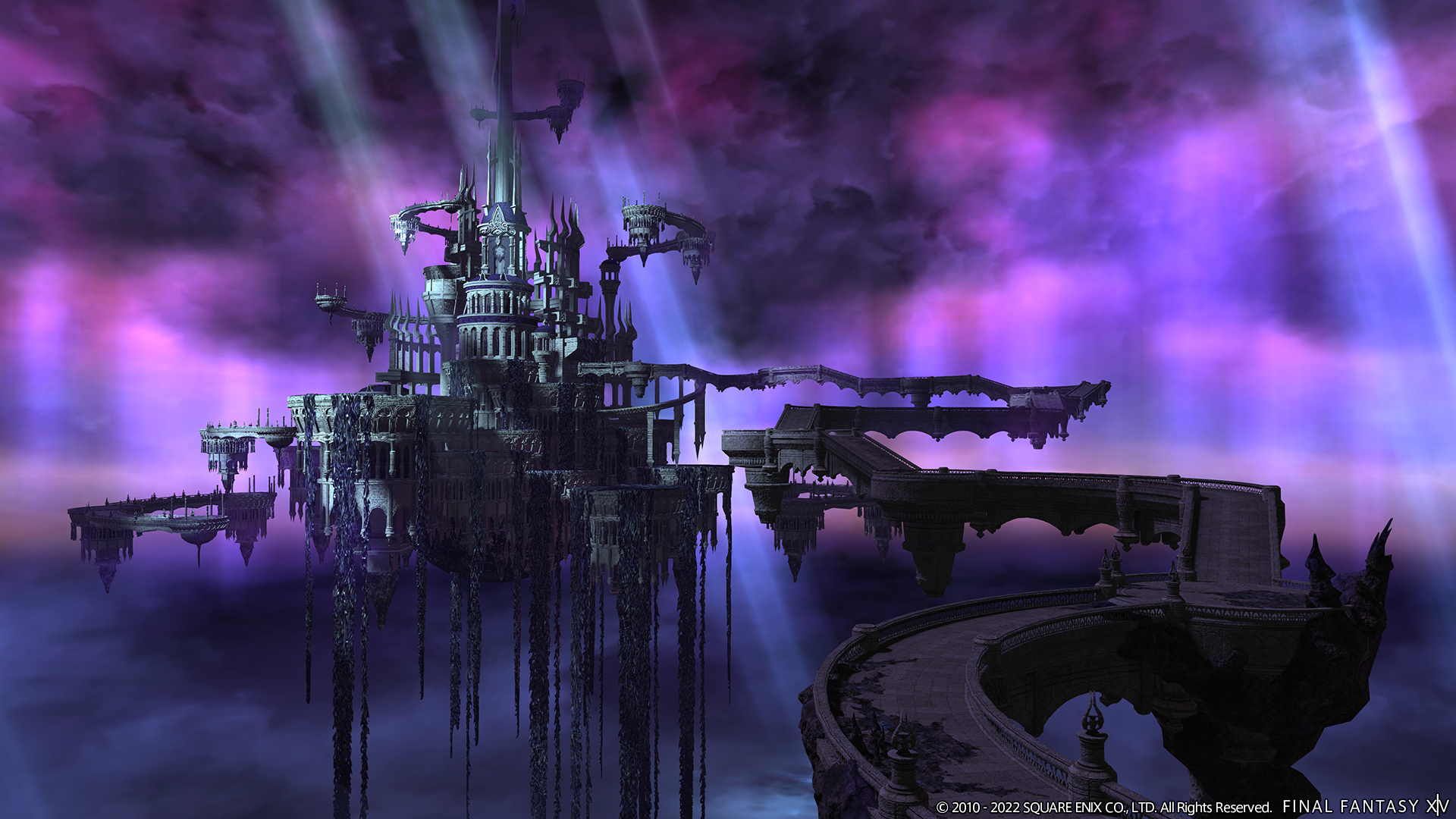 It seems in this update, we’ll have two major duties: a dungeon and a trial! We only seem to know that the dungeon deals in the realm of the Void, known as the World of Darkness, which we last visited back in the Crystal Tower raid series. Of course, those of you who explored deep into Shadowbringers content may know there’s a lot to learn about the Void.

But screw the Void, right? We don’t need to find anything. You need to find your way onto the island and find every corner of it so you can build your buildings. You’ve got the Puff of Darkness for your new roaming-minion farm, that’s more than enough.

The Creative Unit 3 team has been slowly working on making FFXIV almost entirely playable solo, which you can also do on Island Sanctuary anyway because you get your own island. After A Realm Reborn, Heavensward is the next expansion to get this treatment. 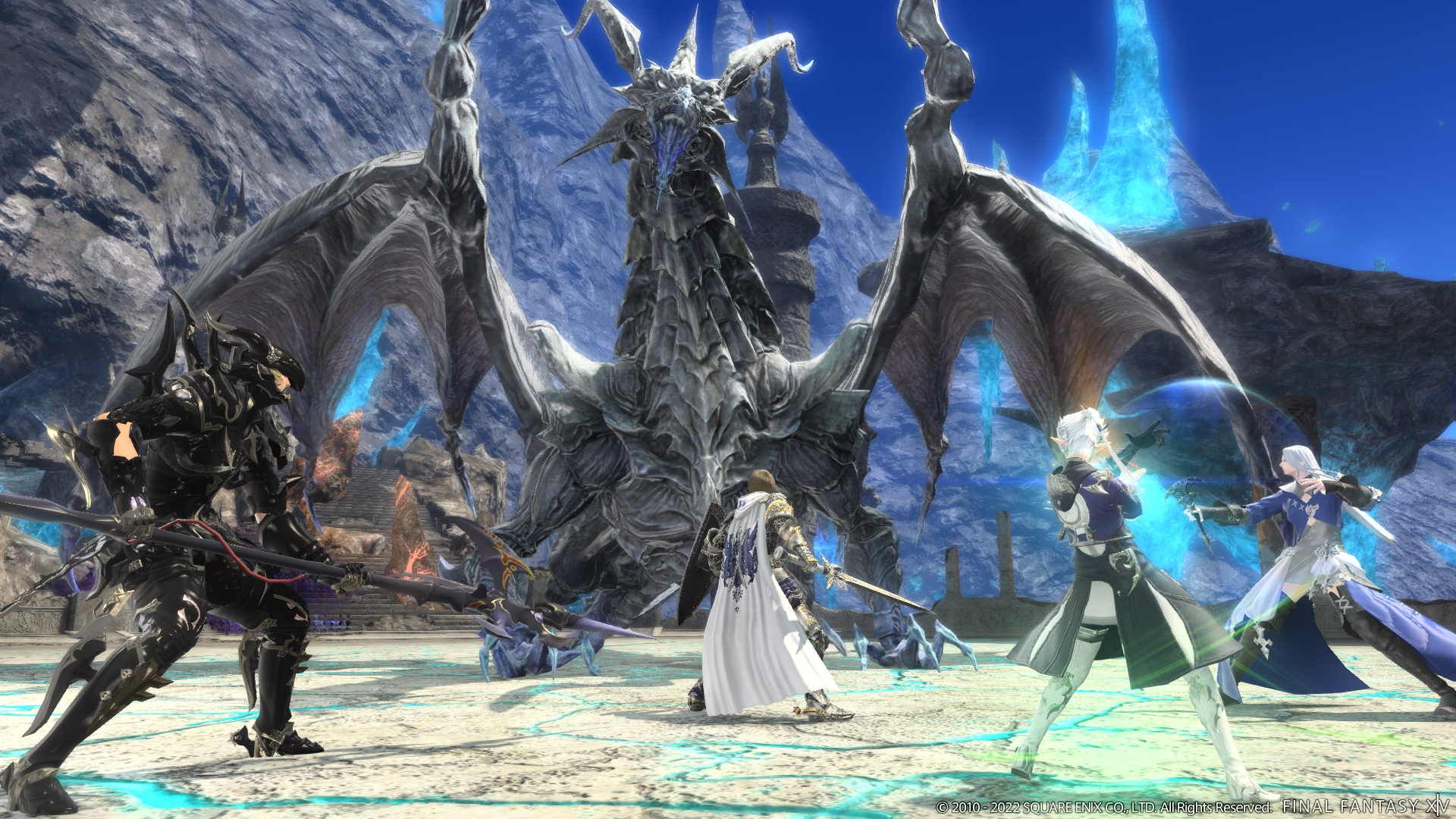 The Duty Support system, known as Trust in past iterations, will be integrated into most of the major MSQ duties through Heavensward, up to The Vault. (Reminder that Trust was introduced in Shadowbringers, and was part of Endwalker). This means that if you don’t want to queue up with actual players for any reason, you have an opportunity to do the dungeons regardless. They’re far, far slower and less effective than actual players, and they don’t revive you if they die but this hopefully allows new players to get comfortable with dungeon basics. (I’ll get into this some other time.)

We’ll also be seeing Steps of Faith, the dramatic pre-Heavensward trial, turned from an eight-player duty into a solo one with AI helping throughout, and Thornmarch (the Moogle trial is getting an overhaul too). But the only steps and march you’ll want to take this patch are onto your own private island, so that doesn’t really matter.

People still take this game seriously and actually grind for weapons. Can you imagine that? With Island Sanctuary coming? At least this time, the grind will have a little more heart to it.

The high-end weapon farming is now tied to the Hildibrand quest series, which is the slapstick side quest series featuring the misadventures of Hildibrand Manderville. On a larger scale, the quest series has been pinned as an experimental series for the development team, allowing them to practice animations and other techniques that have been carried into mainline development. 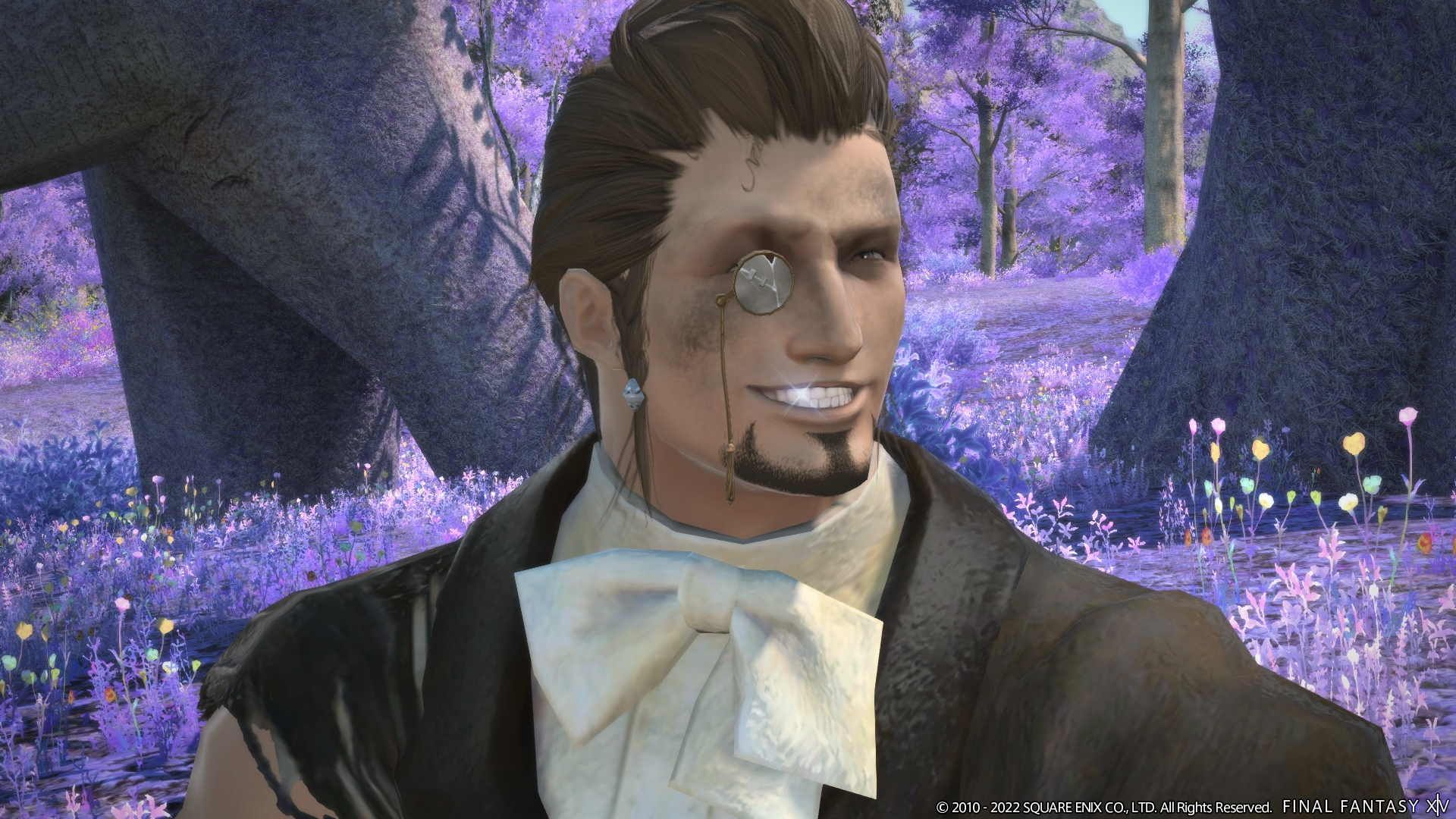 Gentleman extraordinaire and son to the Manderville empire, which is responsible for the Golden Saucer, this man’s questline has been going since 1.0 and features a lively cast, including many classic Final Fantasy franchise characters and references. Now, finally, it seems Hildibrand, Godbert, and legendary smithy Gerolt will come together on a project larger than the mind can fathom.

Since this announcement, the Hildibrand grind has gotten mixed feedback, some in part because some people don’t value slapstick humor (booooo), and some because they understandably don’t want to grind like they did for the Anima weapons. And in interviews, the developers have justified this because of both lore reasons and development resources reasons. Both fair! But you know what everyone can get on board with? The new farming simulator game mode. Yeah. Don’t farm weapons. Farm fruit.

I don’t know how to get into the new raid tier without smothering spoilers all over this article, but there’s dramatic, goth-ish monsters in an edgy setting. I mean, the last boss of the last tier was a vampire, for gods’ sake. And did you hear the soundtrack throughout? Organs on organs on organs. (Not the internal kind.) 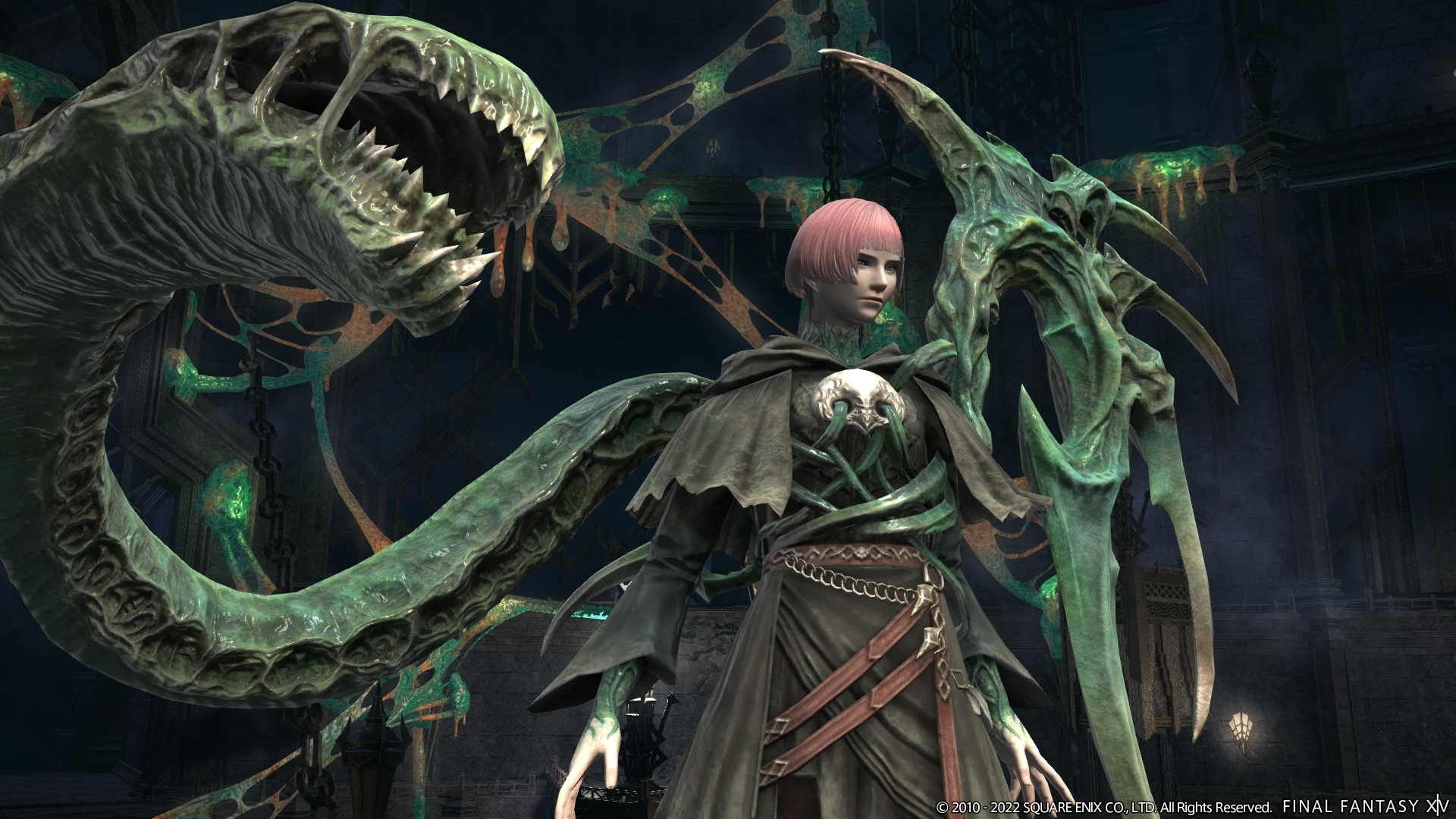 But there are old Ascians everywhere! Everyone suspects this is going to be lore-heavy given the names we’ve heard (and not just Lahabrea)! You get to re-visit Elpis! And the glamour is usually neat! If you’re interested in the real endgames, lore and glamour, you might as well swing by once a week, right?

And then when you’re done, wear your shinies to the farm. Show them to your minion. Do some GPosing. Follow your dreams.

Something equally in demand to Island Sanctuary by many semi-casual players was another replayable dungeon experience. And in post-Endwalker, we finally have it!

The Variant Dungeon, and its Criterion high-difficulty equivalent, allows a replayable experience by allowing choice and a scale in difficulty based on player count, from 1-4 players. Through player actions, specifically player votes throughout the dungeon, the party will progress in different ways through the dungeon. Difficulty will also scale based on how many actual players are in the dungeon. 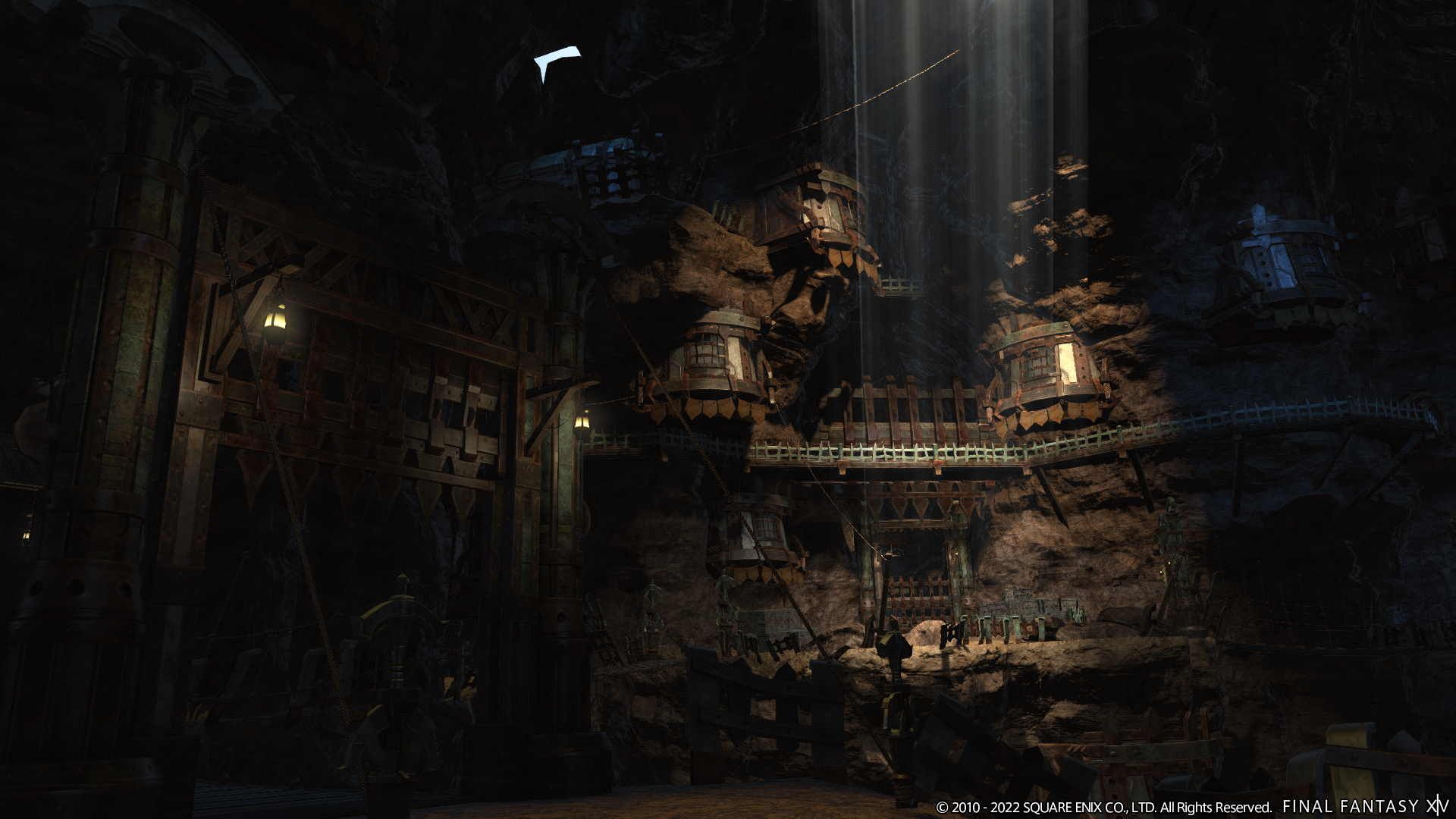 Of course, there are some differences in execution between Variant and Criterion. Variant is meant to be more story-focused, with NPCs from the main story accompanying you throughout the experience, which I’m personally excited about as a Thanalan starter city player and Black Mage main. Meanwhile, Criterion is meant to be more of a challenge, focusing on gameplay and mechanics instead. There are also no role restrictions in Variant, but Criterion does require a standard party (2 DPS, 1 Healer, 1 Tank).

Maybe if you’re level 90, you’ll give it a whirl? I mean, have you seen the new giant rat-squirrel-thing? But you could just, y’know, live a peaceful life instead. Emerge from the Subterrane. Descend onto your island.