Happy Thursday, fellow housing enthusiasts! Last time we met, I mentioned that I had secured my first apartment in Final Fantasy XIV Online, and this week I thought I would show you some of the fruits of my labor. While I’m by no means an interior decorator, and have very little experience with FFXIV’s housing system, I wanted to show you that even a beginner can make a comfortable place that they can rest in and prop their boots up at the end of the day.

Since I bought my apartment, I’ve redecorated it at least 4-5 times over because I just couldn’t find a cohesive theme that I liked. Not only that, but I really couldn’t figure out a function for the space. At first, I wanted a personal apartment. Later, I wanted a quiet lounge for my FC members to hang out in until we purchased our new FC home. 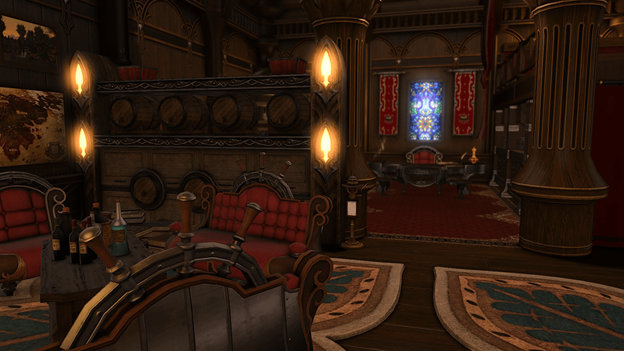 After some digging around, I stumbled upon “Housing Snap”, which is a website dedicated to FFXIV housing, where members can post pictures of their homes. There are so many talented designers on here, that I felt immediately defeated when browsing through all of their beautiful creations. But then, I found it. A beautiful, pirate-themed haven that doubled as a private living space and a room to host guests. Unfortunately, I couldn’t visit the apartment because it was located on another data center, but after analyzing the decor in the screenshots, I set out to recreate it as best as I could for myself. 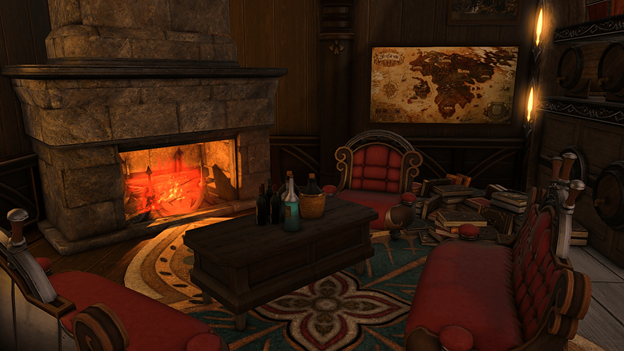 “A Pirate Haven in the Glades”, I’ve decided to call it. My humble apartment is situated in the Lavender Beds of Gridania, so it felt fitting. When you descend the stairs to the apartment, the first thing you’re greeted with is a cozy sitting area, complete with all the books you could ever want and a warm fireplace. Half-empty bottles sit on the center coffee table, either a testament to the tenant’s drinking problem, or the leftovers from the previous night’s festivities. Naturally, there’s a rack of casks, filled to the brim with rich honeyed ale and ready for emptying. 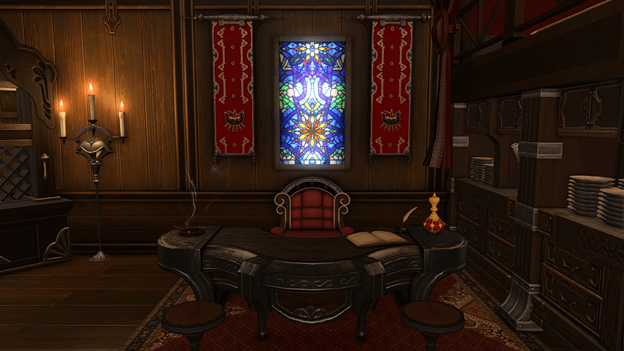 A desk with an open book and lit cigar rests in front of a small stained glass window. A dark, rustic red color is a common theme throughout the apartment. It’s one of my favorites, and I think works really well with the walnut-stained wood. Maelstrom banners also adorn the space behind the desk, calling back the pirate theme and tying in more of that red pop of color against the lovely blues of the stained glass. 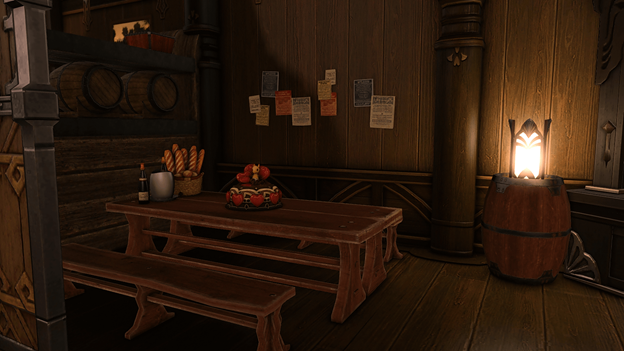 A small partition separates the work space from the dinner table, a modest picnic table with some wine, breadsticks and a celebratory cake. I know, I need to work on my diet, but you’ve gotta work with what you’ve got. Just out of frame, there’s a wine cabinet with several more spirits and a bright lantern to illuminate the spot. With so much alcohol around, I’m starting to second-guess some of my character’s more undesirable traits. 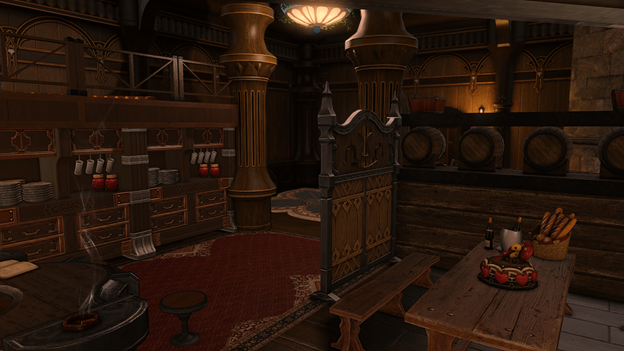 After a long day’s work, there’s a set of stairs leading up to the loft area with a simple bed and rug. A small curtain can be seen, that is implied to exist for a little more privacy and separation. This area still isn’t quite done, but I’m somewhat happy with the simplicity of it. I appreciate that it isn’t littered with a lot of decor that doesn’t quite fit in with the general theme and may actually keep to its minimalistic theme. 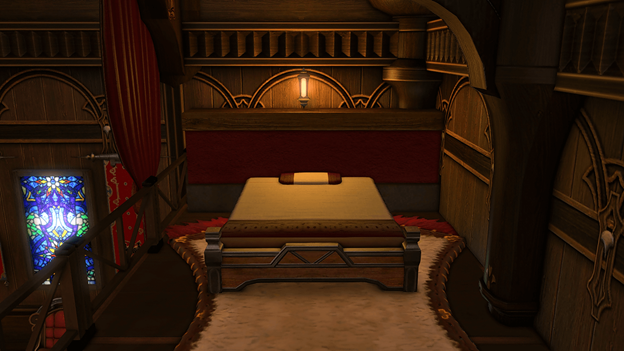 Beneath the loft is another room that is still a work in progress, but I’ve considered following the “Housing Snap” blueprint and making it a wash area. Alternatively, I may decorate a kitchen instead, since it makes sense for entertaining guests. The red curtain here isn’t actually an obstacle, and can be walked through, serving as a hidey hole for my orchestrian player and crystal bell until I find a better place for them. 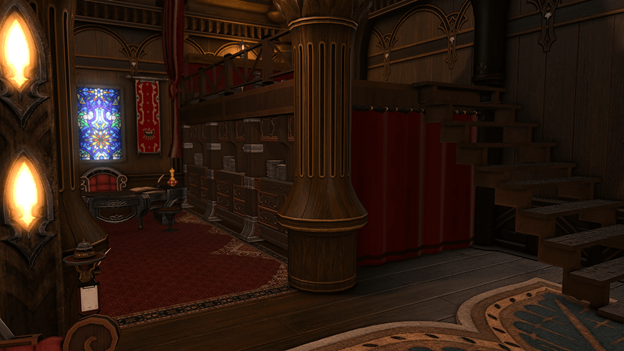 Though I didn’t come up with the design on my own, I’ve made a few tweaks here and there and plan on making more changes in the future once I obtain some more money. Unless you’re a carpenter and can make your own furniture, I’m learning that housing decoration can be pretty expensive! Not only that, but you’ll need dyes as well to dye certain items to match each other. If you don’t, it’ll probably end up looking like a home out of an abstract painting.

Next showcase, we’ll be exploring a new format for the article with an actual walkthrough video supplemented by screenshots for those that would like to browse through still photos. I hope that this apartment inspired some of you that haven’t quite delved into housing yet to invest in an apartment on your server and start decorating. It’s a great feeling, having some place that is your own at the end of the day to retire to after several hours of pursuing your main scenario quest.