Erek Sprax here.  My brother is likely the biggest coffee snob I’ve ever met. He won’t drink just any coffee.  In fact, he once dragged me on the Hutton Run just to get “the right cup of coffee.” I’m sure I still have the stupid mug somewhere. Me on the other hand;  I’m not that picky. You could grow it on Ganymede and call it Red Eye Coffee for all I care.  Heck, after staring at the FSS scanner every day for the last week, you could just make it instant in the microwave and you’d still be my hero.  Traveling to S Antliae was another long journey in my tour of the cosmos and once again I found myself tuning the scanner at every system along the way.

Not for nothing, I did make 67 unique discoveries including Nyeajaae PT-O B39-0 and its 42 orbital bodies.  There was something wrong with my navigation though.  I suppose I’ll have to take it for repairs before I head out again.  You see, after an accidental run in with the law a few years back, I found myself in detention on The Penitent.  Heading back home, I ran out fuel and had to call The Fuel Rats to come rescue me.  Yeah, they were cool but part of the deal is you get to listen to a lecture about not traveling with fuel scoop.  Fast forward a week and I was traveling with a fuel scoop but kept hitting systems where I couldn’t refuel and eventually ran out of fuel again.  Fortunately, my son was nearby and came to give me a boost to the nearest fuel star. 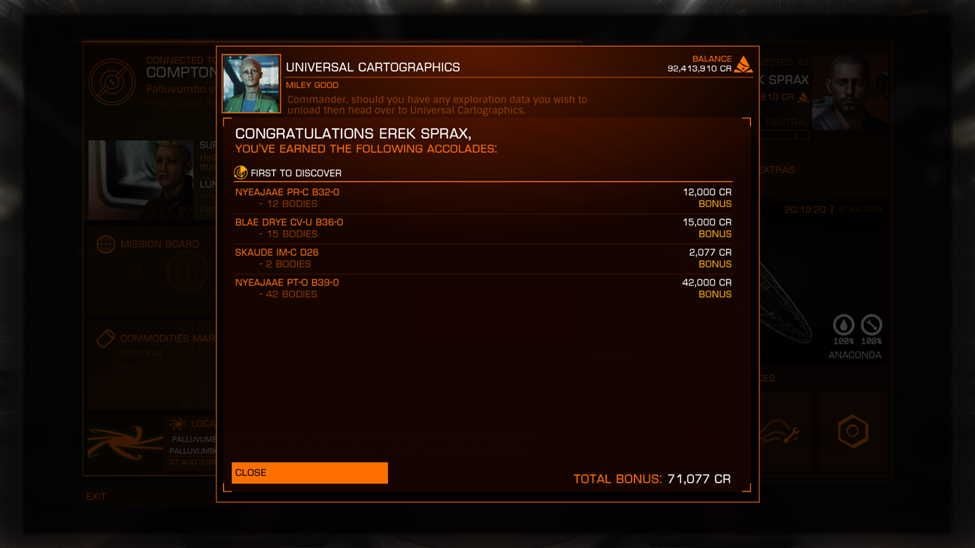 Nowadays, I have on my navigation a setting to plot courses only using fuel stars.  The problem is that despite having plenty of fuel stars along the way, my ship kept taking me to stars that couldn’t be used as fuel stars.  Specifically, I kept heading to systems with brown dwarf stars.  Honestly, I think they look more purple than brown.  In fact, I knew something was up because during my jump the first time it happened, the light from the star was actually giving my ship a purple glow to it. 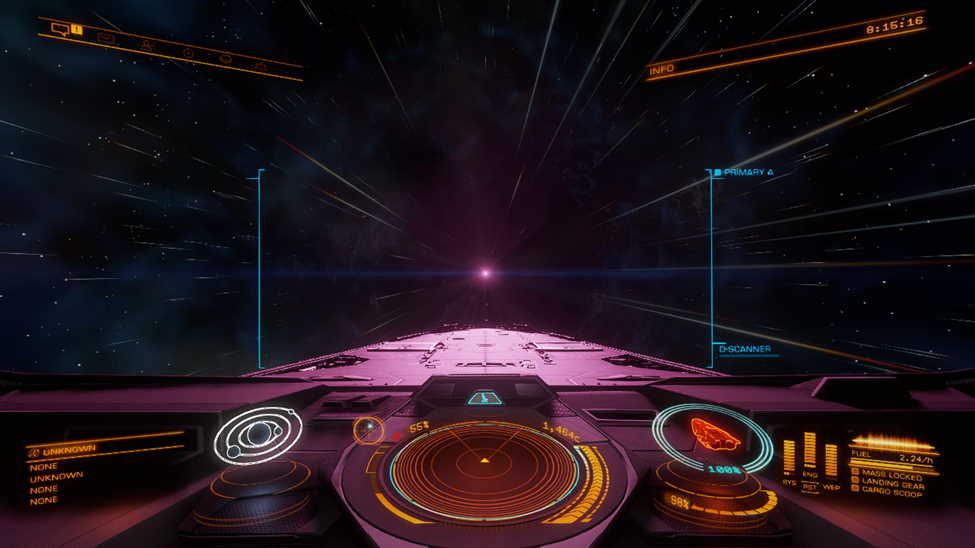 Like my last journey, I was able to find a lot of really cool things along the way.  I had a great opportunity to see a septenary star system. That’s 7 stars in one system!  Nyeajaae GL-I B 15-14 has an M class red dwarf for its primary star and 6 other stars in the system making it a treat to have come across so unexpectedly.  I only wish they had been closer together.  That would have been an awesome picture.  Still, it was undoubtedly one of the coolest things I’ve seen and it makes me hope to eventually come across a system with 8…or even more! 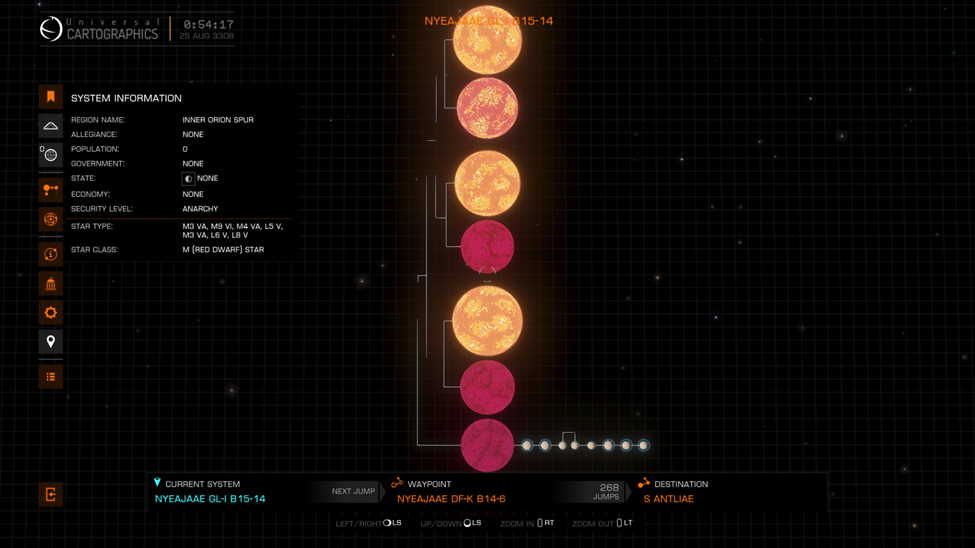 To be honest, the sight of merging stars wasn’t all that I’d hoped for.  Perhaps the area will be unsafe to visit by the time it gets to what I was expecting but I had in my mind the idea of two suns literally colliding into each other.  Scientists say that’s exactly what’ll eventually happen.  These two blue-white suns are orbiting each other making them binary stars. One is much bigger than the other and eventually, they’ll form into one giant star.  Who knows how long it’ll take.  It was interesting to see but right now it’s just two stars in each other’s path. 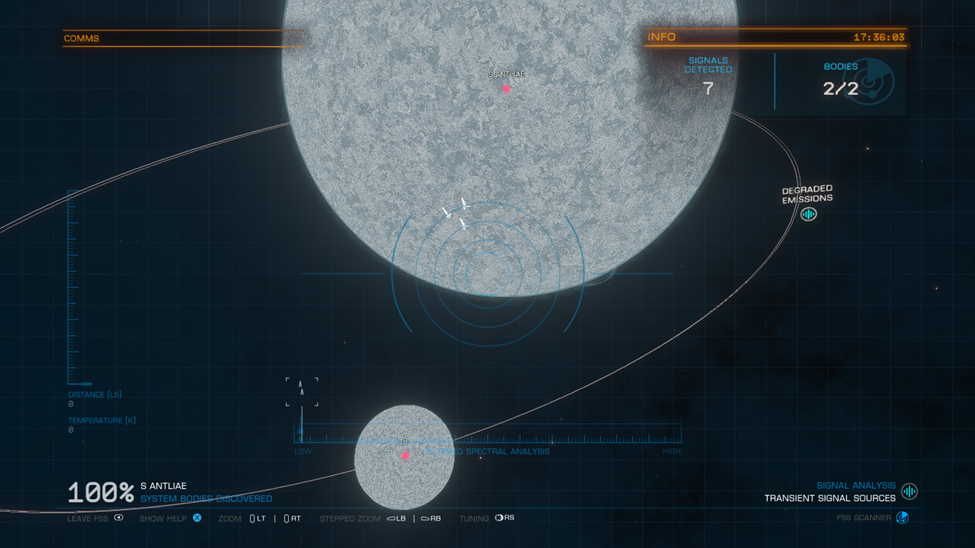 That picture I took with the FSS scanner showed the size difference between these stars.  It really does look like one is chasing the other and in a way, I suppose it is.  It’s amazing to think how many wonders our galaxy holds even in places where there are no inhabitants.  Growing up, I often heard this question; “If a tree falls in the forest with no one around, does it make a sound?”  Obviously it does.  The science of sound doesn’t change based on whether or not there’s a human around to hear but I’m still humbled to know that the universe is so glorious and majestic that there are constantly things happening that have absolutely nothing to do with humanity.  Will I ever get to go back and see this system with only one star?  Probably not…and that’s okay.  I sleep a little better knowing the world has mystery that my feeble mind can’t comprehend. 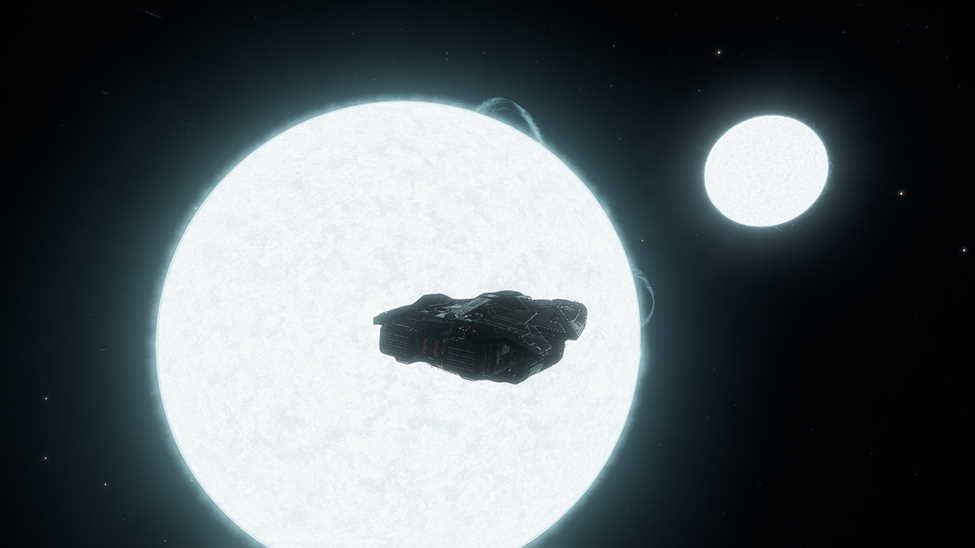 My travels are far from over.  I made a quick stop for fuel and repairs and one of the guys at the shop heard what I was up to.  He told me that I should check out the gas giant nearby at Hyadum I.  Apparently, it’s very close to the local star.  It’s not that far away so I may take some time here to rest before heading back out but you can be sure I’m far from finished. Erek Sprax out.