Commander Erek Sprax here. If you’ve been following Galnet, I’m sure by now you’ve heard about what happened at HIP 22640 with the Thargoids.  I keep hoping beyond hope it was just a dream but they’re calling it the Second Thargoid War.  With the Proteus Wave failing, I don’t see how we can possibly win.  Let’s face it; Salvation’s whole mission was a Hail Mary to begin with and all we did was anger the beast.  My son is a pilot for the Federation and thinks all available pilots should take up arms to defend humanity.  I think he’s crazy.  I’m not sacrificing my life for a cause that can’t be won.

Instead, I headed out to see the sights.  There are plenty of places to go where the Thargoids won’t be an issue.  First on my tour was a place I had heard about from some other explorers but had never traveled to myself.  The Collection of Wonders in Skaude AA-A H294 is truly a sight to behold but at 450 jumps and nearly 12,000 lightyears away from Sol, it took me a while to get there.  Honestly, I could have made it faster but I’m still trying to get my elite rank as an explorer so I mapped every system I jumped to.

In the course of my journey, I made first time discoveries in 53 systems that had never previously been visited.  I was the first to map places like Pyraleau UM-U C19-72 and its 46 orbital bodies.  My journey is far from over and I can’t wait to see where else this adventure takes me. 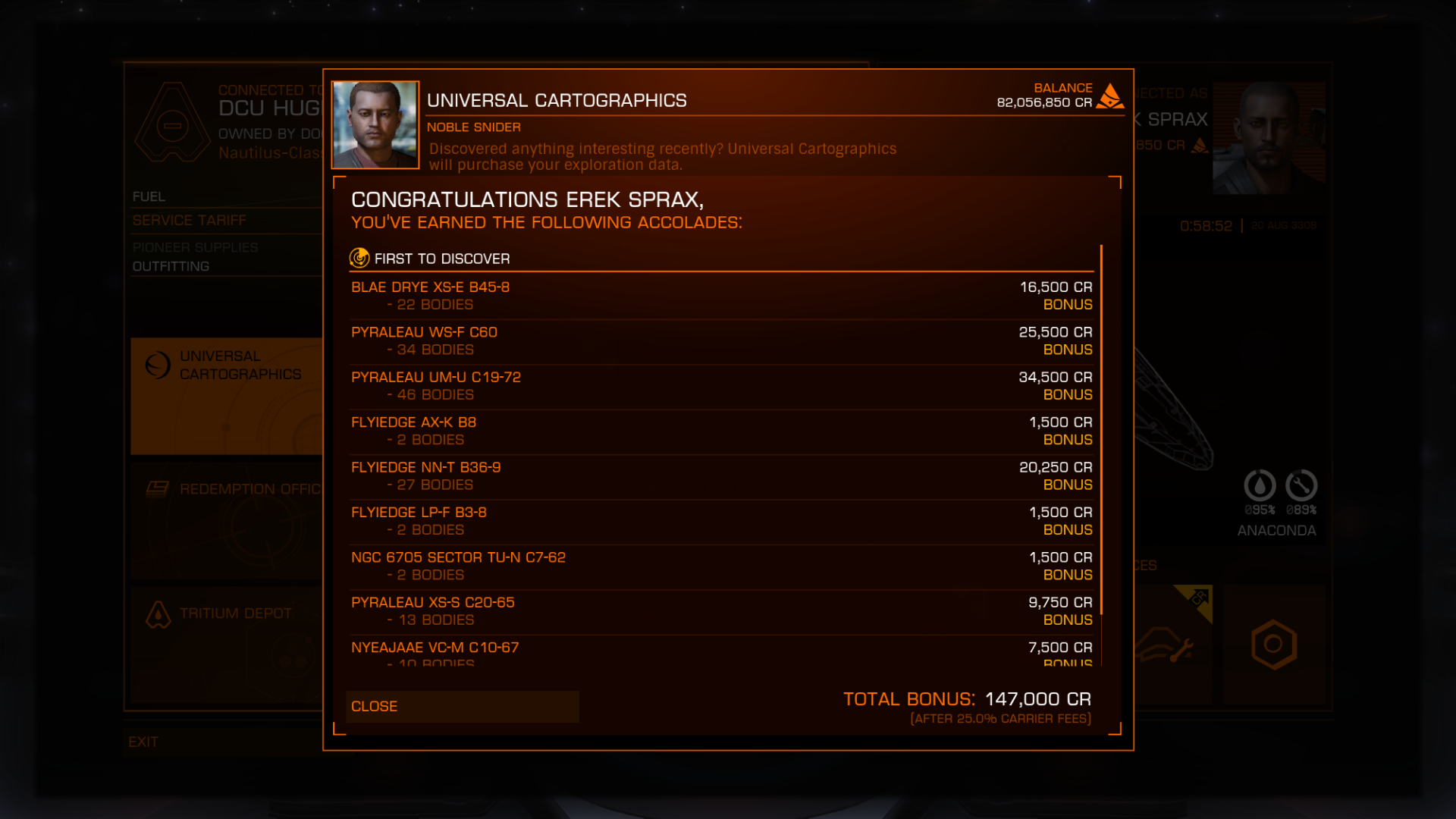 I’ve already seen some pretty spectacular sights like Skaude DJ-F D12-178 where there are no planets or moons but four pretty large stars.  Places like this remind me of how vast our galaxy is.  Even when there is no way to sustain life, four stars in one place is still such an amazing wonder to behold.  It gives me hope that despite our current war with the Thargoids, we still have quite a lot to do in our galaxy… if we survive.  Only time will tell if humanity can hang on or if we’ll just be a blip in the cosmos soon to be forgotten. 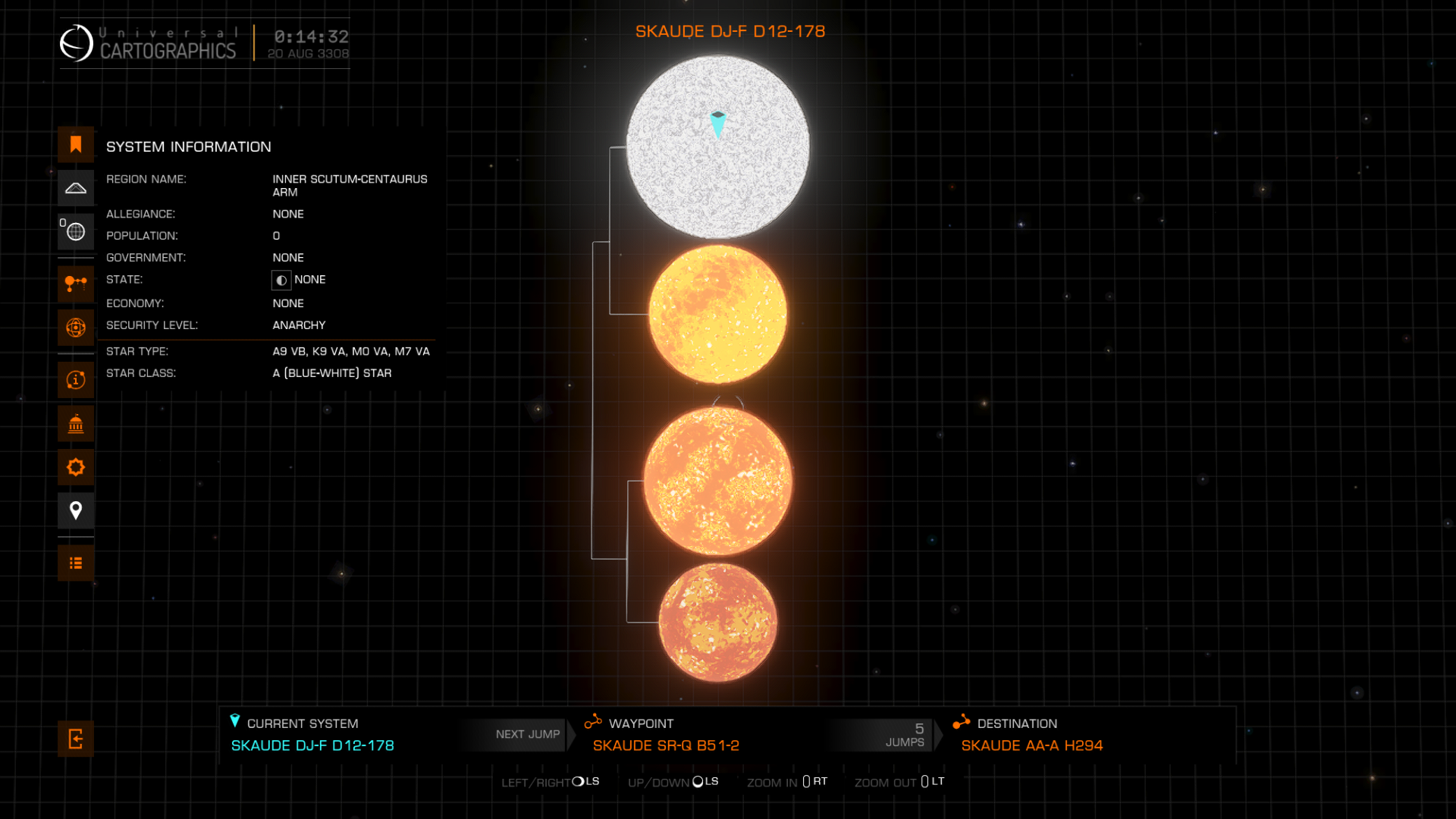 Another system had two very large white stars very close to each other.  In my amazement, I didn’t think to jot down the name of the system but I did manage to get a great picture with the stars so I can show the guys back at Mars High one day.  That is, if I ever get back to Mars High.  If we come out of this war without being wiped off the face of the galaxy, I’m hoping to have my elite rank so I can move over to Jameson Memorial.  If I’m able to do that, I’ll finally have access to all the parts I need.  There’s nothing worse than trying to upgrade a ship but you can't find the parts.  At times, I've had to traipse all over the bubble just looking for what I need.  A better home station will just make life easier. 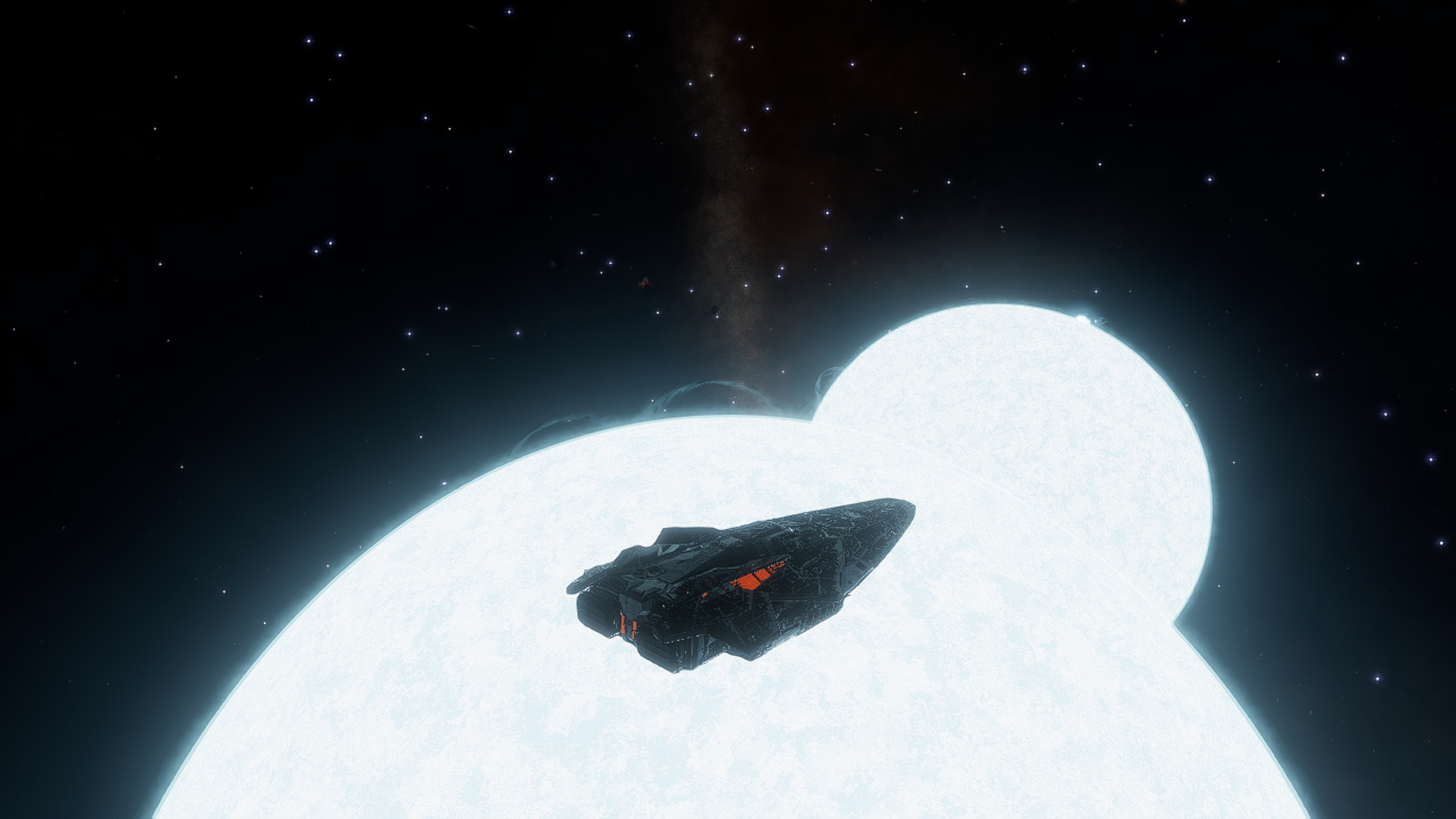 I didn’t forget why I started telling you this in the first place.  I’m sure if you’ve read this long you’re really just interested in The Collection of Wonders.  Skaude AA-A H294 has 2 black holes, a neutron star, a ringed m-class star, and a ringed dwarf! There is so much to see but I had never seen a black hole before.  One day, I’ll make it to Sagittarius A but this was a great trip too. 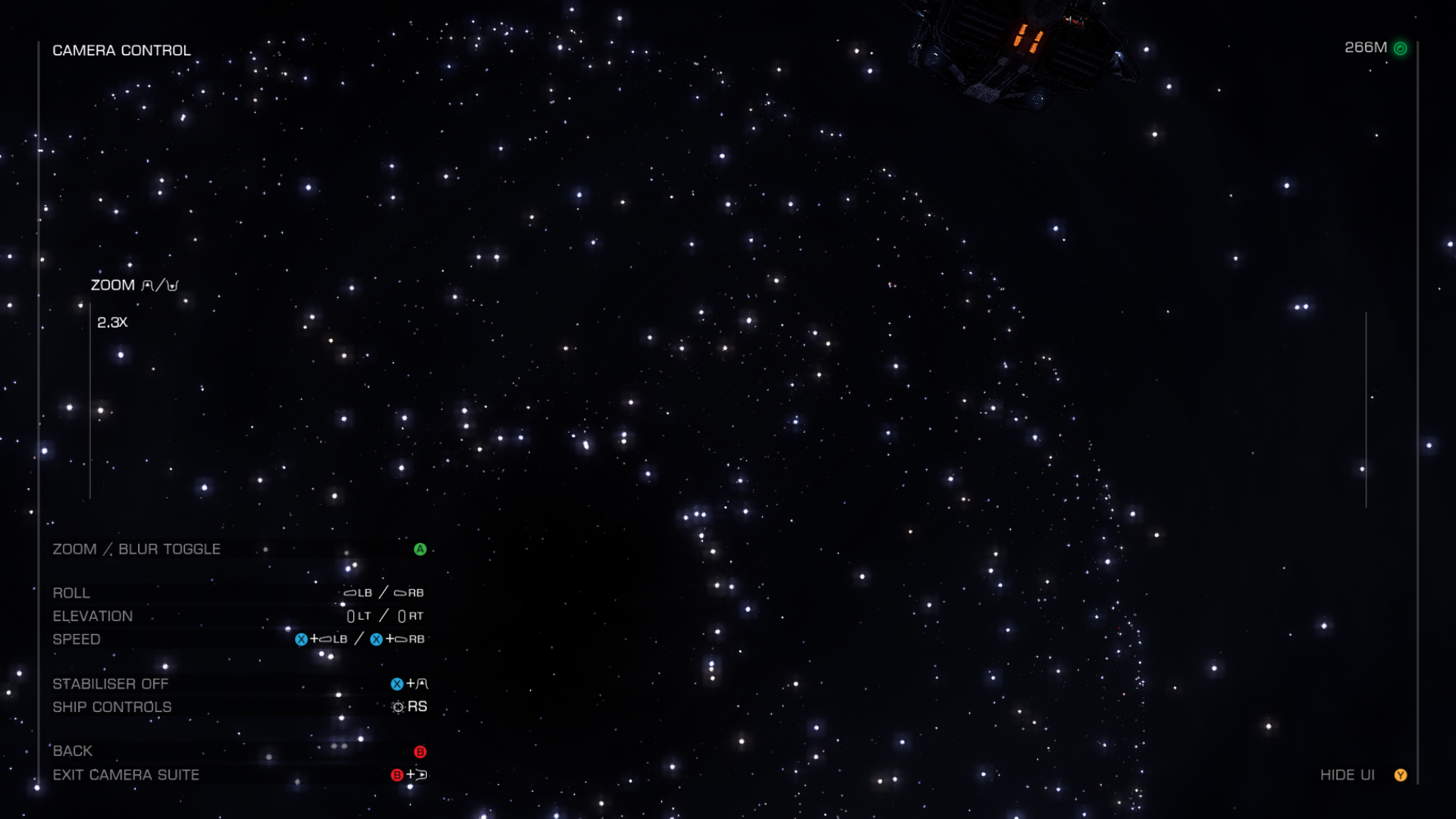 What’s cool is that the closer you get to a black hole, the more you see the stars in nearby systems drawing close to the void where it should be.  From inside the cockpit, it looks as though the light is bending around the black hole.  It should be mentioned as well that the feeling of getting near a black hole is unlike any other.  My stomach was spinning and my sense of balance and equilibrium were just not right.  I wasn’t sick per se but it felt like the whole ship just flipped around to the other side of the anomaly every time I got close to it.  It was surreal. 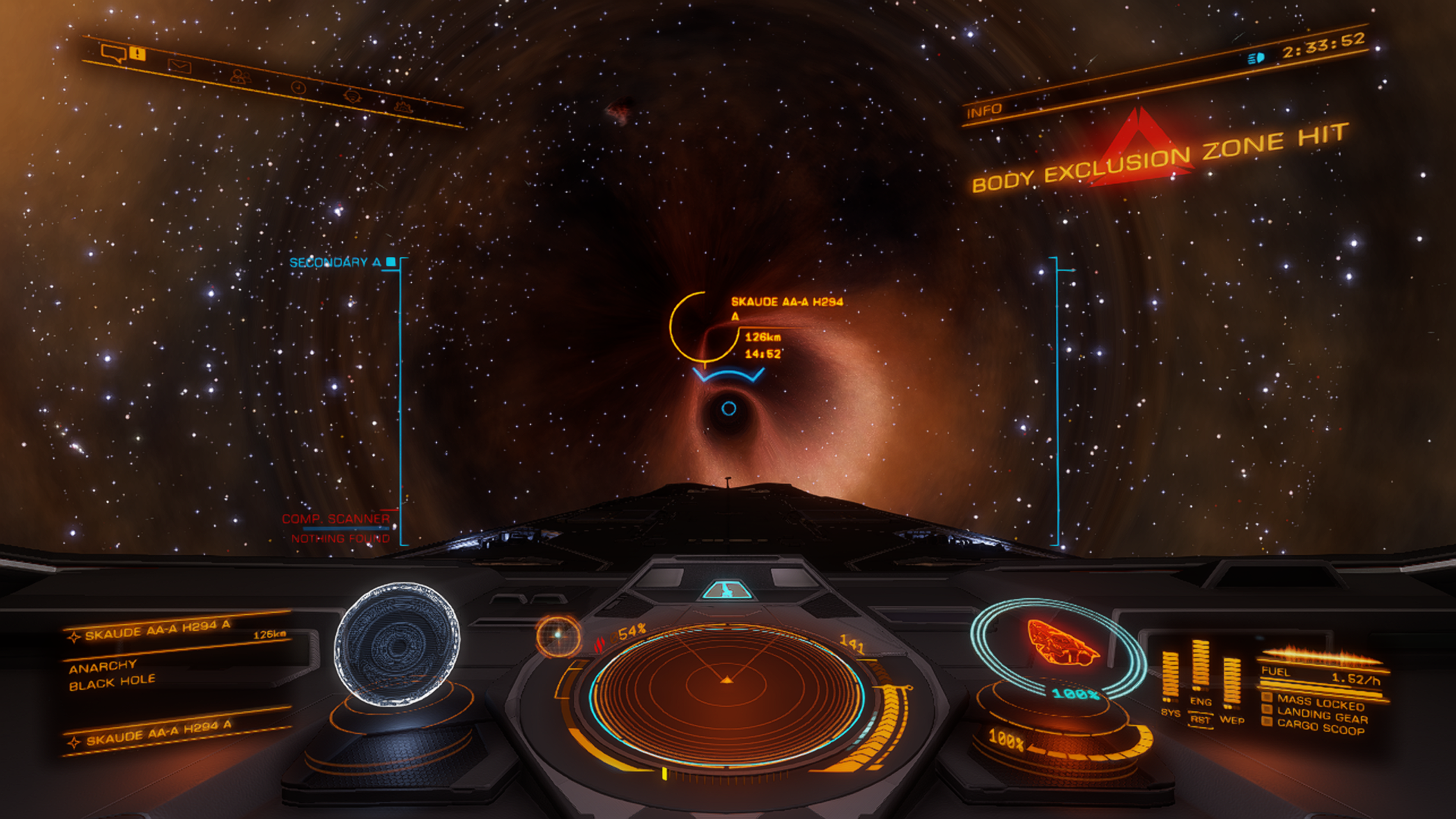 I have lots of time to kill while I trek around the galaxy, so I’ll check in again after my next major stop.  I’m heading to S Antliae next.  I’ve heard that it’s a binary system of merging stars and while I’m not entirely sure what that means, I’ve got a ship, a fuel scoop, and an incredibly high sense of curiosity.  It’s a great combination that can only mean one thing; There’s more adventures just on the horizon.  Erek Sprax out.