Over the past week, I have been on vacation and thus been pretty out of the loop on many things. However, as I returned to real life, I noticed a few news bits I wanted to share and, in some cases, expand on a bit. This week will look back at the recent happenings in World of Warcraft rather than the usual random topic pattern I usually follow. I’m sure the randomness will return with the next column, though.

One of the best bits of news from this week is the bear raid was able to down Heroic Denathrius on April 17th. For anyone who isn’t familiar with the bear raid, it is a raid full of Guardian Druids taking on raid bosses and having a blast at it. Part of the way this is done is by making full use of the Druid’s affinity row of talents. These talents let a Guardian have some aspects of the other specs and either increases their damage or provide extra healing. Only the bears who are actively tanking the bosses will stay in bear form while others will switch in and out of cat/moonkin for additional damage or switch to caster form to toss quick heals out.

This all started at the end of BfA because the Twilight Devastation corruption was incredibly powerful for Guardian Druids. They’ve continued into this expansion and are still proving how versatile Guardians still are without an overpowered corruption. I’ve only had the opportunity to run with them once because their normal raid time is when I am generally busy, but it was an absolute blast, and I highly recommend it. If you are interested in joining either for WoW shenanigans or to hang out with fun people, the best method is to join their discord community.

9.1 Makes its Way Onto the PTR

As Blizzard had previously announced, 9.1 did go live on the PTR this past week. I’ve only spent a little bit of time on there so far since I was pretty much gone all of last week, so I’ve only really dipped my toe in thus far. I will stick to my normal mode and refrain from story spoilers as much as possible. That said, it looks like 9.1 kicks off with a Kyrian delivering news of the events from the Kingsmourne cinematic. I’m happy that there are no other bridging events before we jump right into the meat of everything. It hits the ground running and gets into the action right away. However, none of the cinematics are actually in at this point. There’s a lot of “A Cool thing Happens Here” placeholders, so I am speculating a bit about what is happening. Starting with Kingsmourne seems like a solid assumption because of the dialogue that occurs shortly after it should play.

One thing I was happy to see in the news over this past week is that WowHead datamined some info about the new legendary ranks which seems to confirm that we won’t be using Soul Ash past Rank 4. If this is accurate, then it means there’s no reason to start stocking up on Soul Ash now. I can go ahead and finish leveling up all my legendaries and make some I think would be fun to mess with without potentially gimping myself in 9.1. Datamining is, of course, not 100%, so we won’t know for sure until the new ranks and system are on the PTR for testing.

There’s also new information regarding unlocking flying; most notably, it looks like we won’t have to get another 40 Renown levels to unlock it. It looks like we’ll be able to obtain a memory shortly after unlocking the hub in Korthia, and that memory is what will unlock flying. So it doesn’t seem like we’ll have to wait too long after 9.1 launches, assuming you are all caught up on the story, to be able to fly in Shadowlands. This does come with the caveats that we won’t fly in the Maw, Korthia (technically part of the Maw), Oribos, or in the spaces between zones. In other words, we won’t be able to fly directly from Ardenweald to Bastion. This is a bit disappointing, as I was hoping our flying mounts would be able to ride the anima streams between zones for a bit of variety there. I wasn’t expecting flying in the Maw, though, seeing as how before 9.1, we couldn’t ride our mounts there at all.

One final note, there’s slightly one week left of the Charity Event to raise money for Doctors Without Borders which ends April 26th at 11:59 pm EST. This time around, instead of offering the purchase of a pet to raise money, Blizzard has set two donation levels for everyone to be awarded the new pet. The goal of $500,000 was hit a while ago, and players were awarded their very own Bananas. If you haven’t received your Bananas yet, you can claim it directly from the Blizzard Shop. As of writing, we are only $74,414 away from unlocking the second pet, Daisy the sloth. 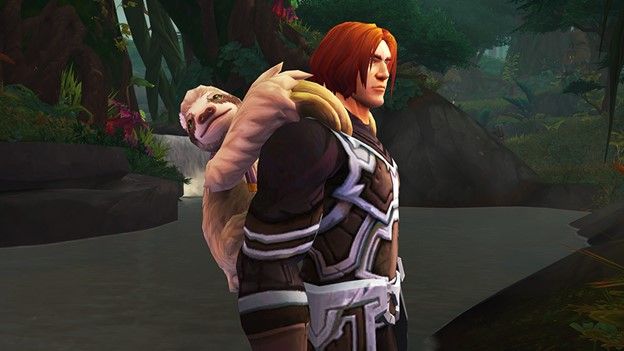 If you’d like to contribute to this incredible organization, you can do so by clicking this link. You can donate via credit/debit card, PayPal, or Amazon Pay. Anonymous donations and donating on behalf of someone else are also available options.