In 1998, I was both a sophomore in college and an aspiring MMO designer. My interest had started with venerable text-based MUDs, which were a big thing for me from my high school days, and it eventually led me to the fabled MUD-Dev mailing list. There I spent a significant amount of time listening (and, frankly, far too much time speaking given my own ignorance) to MMO greats discussing various topics having to do with online game design. And I remember sitting up straight one day in December when legendary MMO designer Raph Koster, creator of Ultima Online and Star Wars Galaxies, wrote to the mailing list soliciting "laws of online world design" for an article he was writing.

While other members of the mailing list quickly replied to the initial email with their own suggestions for laws, I was both daunted and intrigued by the prospect of proposing such a law myself. After all, I was only a student and aspiring designer with no real experience under my own belt.

Yet, I still felt that I had something that could come in handy; not as a designer, but as a player. And those were my observations comparing multiplayer games to single-player games. In both cases, players were often asked to kill a monster, pursue a quest, or save the world in some way or another, and they gladly did it. However, in a multiplayer game, players invariably found it more rewarding when they saved the world together (at least when not killing each other).

This is hardly rocket science. The fundamental aspect of a multiplayer game is that there are multiple players. But it leads to an important realization, which is that MMOs should be designed to promote people playing together.

I was thrilled when Raph accepted my humble suggestion for a law with good humor, and then improved on my clumsy wording. It is now enshrined as "Elmqvist's Law" in his classic article "The Laws of Online World Design" as follows:

But besides tooting my own horn, the real point I want to make here is that modern MMOs are increasingly moving away from this fundamental design guideline by reducing the incentives to play together.

Old-school MMOs such as EverQuest, Asheron's Call, and Star Wars Galaxies were all designed with groups in mind, pitting players against obstacles they could only overcome by working together. Some of my own fondest memories of early MMORPGs come from exploits done in a group. Even World of Warcraft at release was designed so that leveling solo was excruciatingly slow and dangerous if you did not have access to a group. There were classes dedicated to healing, to tanking, and to dealing damage, giving rise to the so-called "trinity" of MMO design: tanks engaging the enemy, healers keeping the tanks alive, and damage-dealers actually killing the enemy while being protected by the tanks. 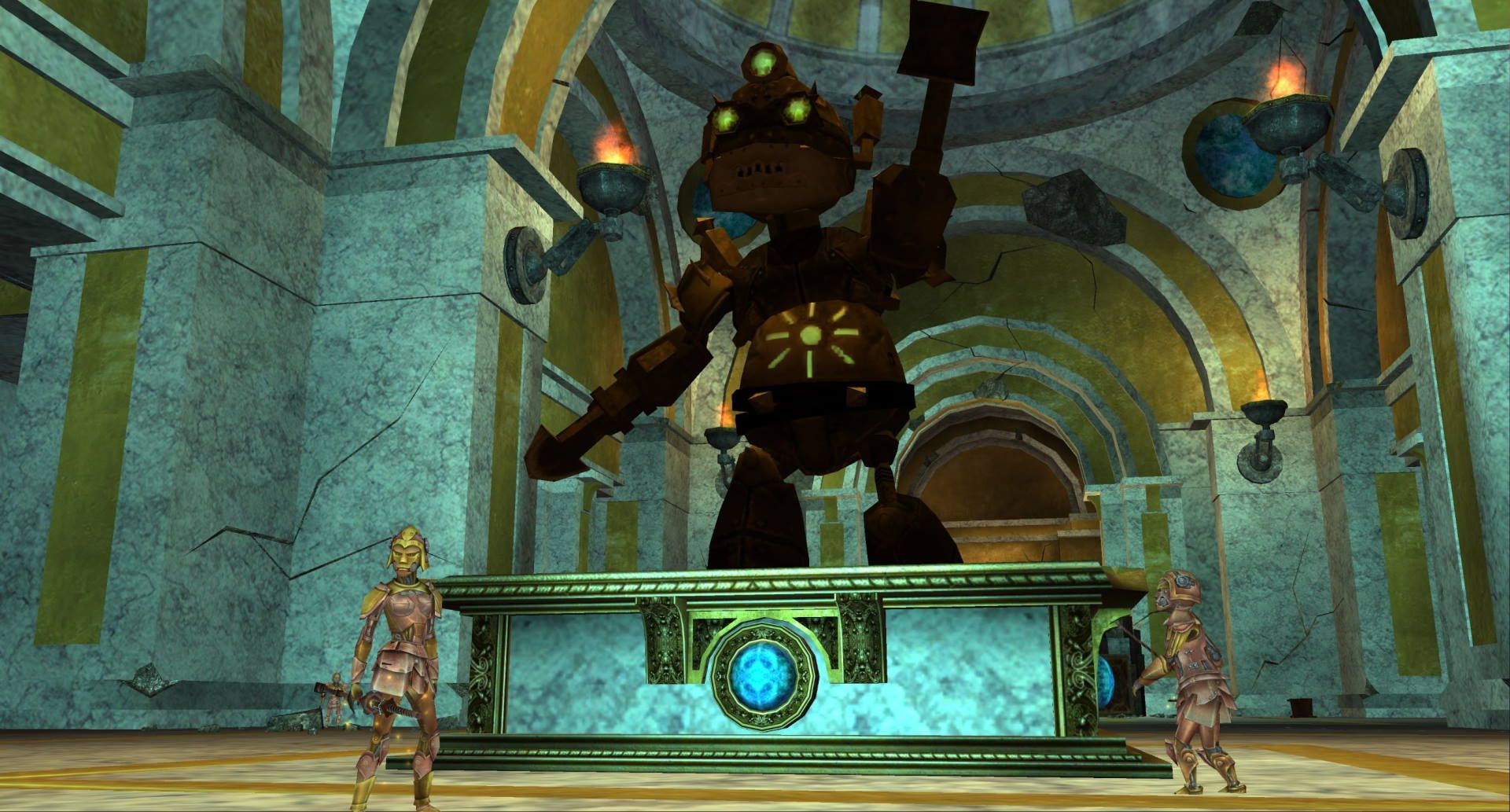 Of course, getting a group together can be challenging and time-consuming, and it is frustrating to play a class that lacks any solo ability, especially when you only have a short amount of free time to play. Also, it flies in the face of more modern RPG design, which tends to eschew character classes altogether.

Accordingly, the trinity has since come under attack on many fronts, which has led to a sea change in MMOs where player characters are increasingly becoming self-sufficient and able to fill multiple roles. Some view this as a "dumbing down" of the genre. For example, WoW has improved the toughness of damage-dealers such as rogues and mages, and has also increased health regeneration across the board, making soloing more viable for all classes. Many new MMOs no longer even have dedicated healer classes; instead, games such as Guild Wars 2 and Elder Scrolls Online give every class some form of damage-dealing, tanking, and healing ability.

This is bad news for those of us who enjoy playing pure support classes, since such classes have more or less become obsolete in modern MMOs. But it is even worse news for anyone who likes grouping in an MMO---and that should mean all of us, because why are you playing a multiplayer game if not to play with others?

Sure, there exist multiplayer games where the fact that there are other people around is almost solely cosmetic. In Path of Exile, every game session is multiplayer, but players actively have to take steps to play with others, and the default is instanced single-player action. The original Guild Wars 1 takes a similar instanced approach to all of the action. These are online games where the multiplayer aspect is almost entirely social (which is not necessarily a bad thing).

Also, there are certainly significant benefits to making character classes more well-rounded, or even abolishing the notion of classes altogether. In the real world, there is no such thing as an immutable "class"; people can do more than one thing with their lives. In a game, this lets players become more independent and able to progress without the presence of a group.

Furthermore, if you spend any time at all in an online game, you will quickly realize that the vast majority of people want to play damage-dealers, where they can plunge into the thick of the action and spend all of their time trying to kill the enemy. In comparison, playing support or healing classes is often perceived as unglamorous or even boring. Eliminating support classes solves that issue since it means that everyone now becomes a damage-dealer.

Never mind that playing support in MMOs that have dedicated support classes, such as EverQuest 2 and Dark Age of Camelot (or World of Warcraft when raiding in top-tier dungeons), requires some of the highest levels of skill in gaming. 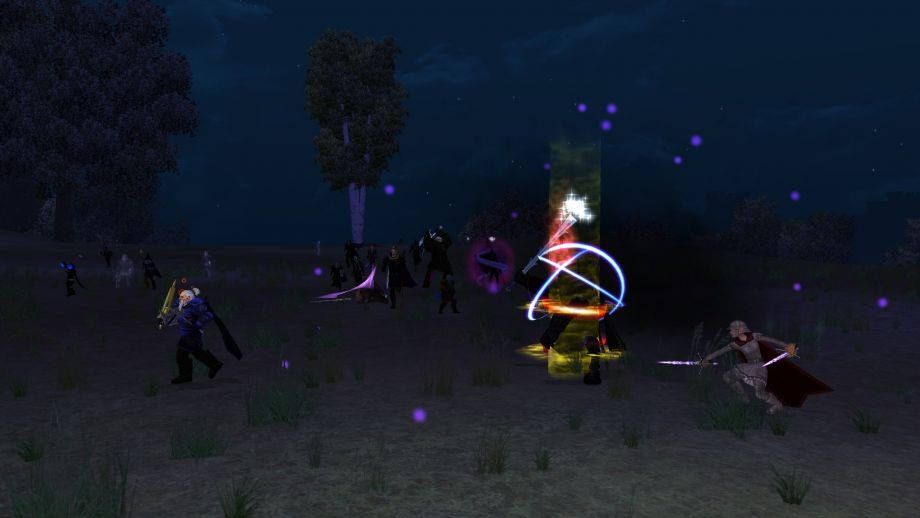 But the real victim is the end-game and the long-term appeal of an MMO. A player that has spent their entire career reaching the level cap alone has never picked up some of the vital skills needed for grouping, and being asked to learn them in the end game can constitute a steep learning curve. Worse, these players easily become conditioned to playing solo, and may never appreciate or seek out the joy of cooperative gameplay. The real key to MMO replayability is often the people you meet along the way and who will sustain you in the end game.

The game's design may also suffer from eliminating classes or making all characters able to support multiple roles. The result is often a skill system that promotes cookie cutter or jack-of-all-trades specs where the difference between each individual character is diminished. And, worst of all, it actively discourages grouping---or, at the very least, it enables players to avoid grouping with others. Again, if we are not grouping with others, why are we even playing a multiplayer game?

Or, as the corollary to Elmqvist's Law states (presumably formulated by Raph Koster himself):

In general, adding features to an online game that prevent people from playing together is a bad idea.

Don't do it. Bring grouping back to MMOs.