Final Fantasy 14 has always been a hero’s tale, but the ending of the base game A Realm Reborn always felt anti-climatic. With the game picking up popularity, Creative Business Unit 3 dove in and made some changes to give new players a far better opportunity to enjoy the end of the story.

Before these changes, these duties would be literal jokes to players worldwide. Skewed caps on item and player levels meant that enemies were disproportionately easy, removing much of the weight of the narrative. Explained in short, players scale in both their class level and item strength, and a level 50 item at a high strength could absolutely demolish a basic level 50 enemy – not to speak of the level 48 trial, Cape Westwind.

Additionally, the larger dungeons were sort of doozies. Castrum Meridianum and Praetorium were long-winded in gameplay, and both required gimmicks that were common to A Realm Reborn dungeons. While interesting and experiential in theory, they caused a lot of confusion for newer players.

The long story short is: gimmicks are gone, some fights have become solo duties, and there’s a new trial. Some unskippable cutscenes remain, but hey, better than yelling at your teammates to not skip the goddamn cutscene.

The changes to A Realm Reborn’s finale directly tackle these issues, in no short terms. Here are those changes I encountered in revisiting the finale in New Game+, and how they fare against the old system.

With great regret, I must inform everyone that the most difficult duty in FFXIV is… nah, you know what, it’s actually good now.

Cape Westwind was infamously a meme before now; previously an eight-man trial, the encounter is now a solo instanced duty. As explained before, class level and item level syncing meant that the level 48 trial was literally laughably easy, with most mechanics entirely skipped due to the speed of the boss’s death. It was a meme across regions, with players going as far as having text macros to demonstrate mechanics, as if it were a high-end raid.

Now, however, it’s a fair fight against Rihtahtyn sas Arvina, who’s supposed to be one of the XIV Legion’s most formidable foes. Most impressively, they’ve added a little more narrative weight to the battle. There are three phases to the fight, with new cutscenes and an entirely new phase that’s basically a DPS check. And, like, hot take? We really unironically needed more of those. Please, CBU3.

Much like many of the A Realm Reborn dungeons, Castrum Meridianum is cut down for size and has essentially all its gimmicks removed. It now follows the well-beloved trash-boss-times-three cycle! There are some literal gates between trash mob waves, but it’s still fairly doable all-in-all. 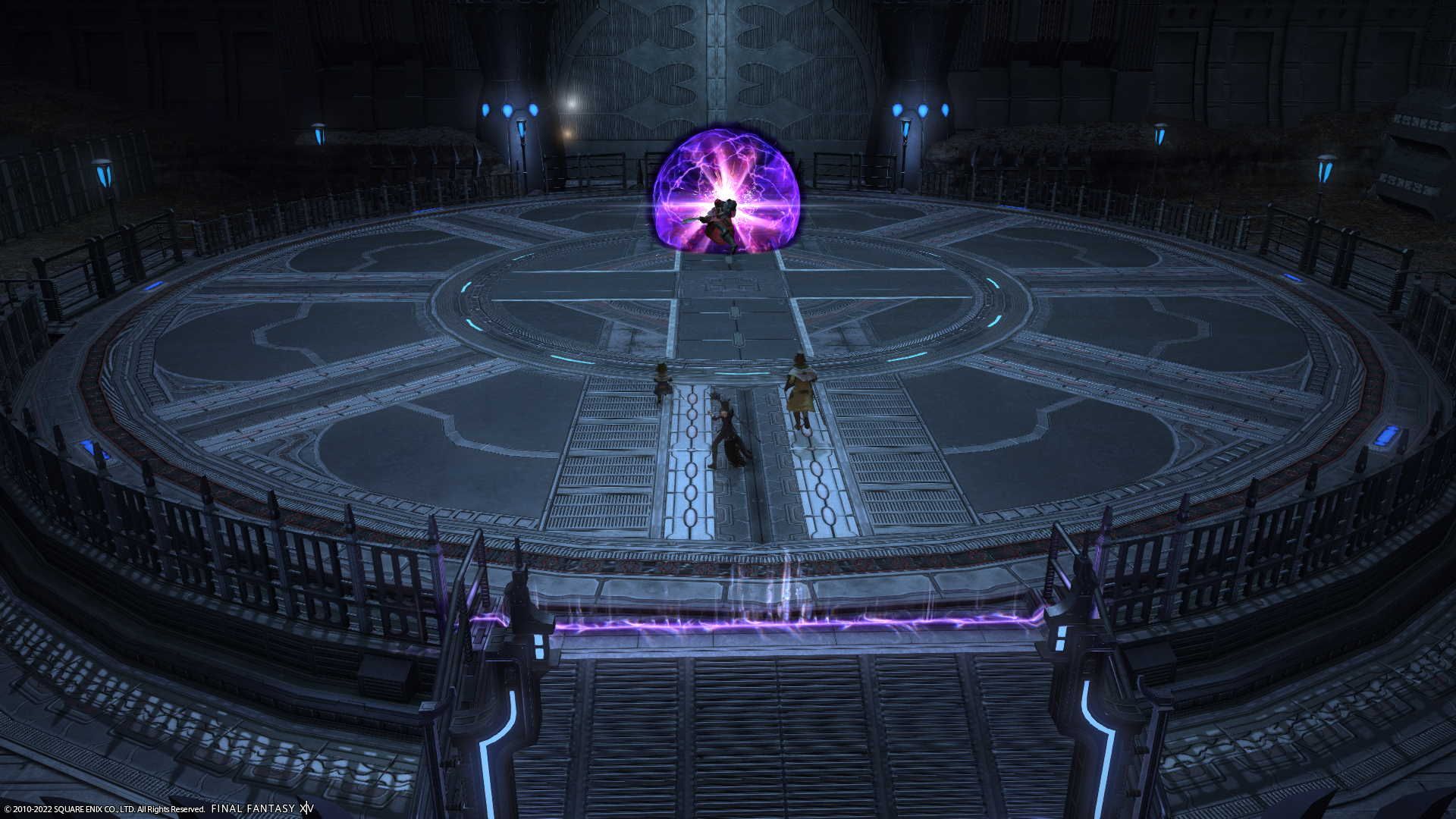 Unfortunately, for the sake of story, many of the required cutscenes are still unskippable. Which is fair! Can’t just remove Gaius van Baelsar’s biggest simp from the equation. However, her fight is also severely trimmed, with the cannon gimmicks removed entirely.

This is also the duty in which I tried to use a few of the Duty Support AIs to accompany me. That was a mistake. Please, if you can help it, do this with other players. The speed or lack thereof of the AIs in wiping trash mobs had me wanting to cry. The thaumaturge doesn’t use Thunder 2? Help?

I’m so sorry, but this isn’t a Netflix marathon anymore. As a four-man dungeon, much like Castrum Meridianum, the new Praetorium takes the path of other dungeons: some small trash mobs, some mini-bosses, one big one. They cut pretty much 60% of the trash mobs and kill much of the need for teleportation. And thankfully, in lieu of the second wave of trash mobs, you get lectured at by Daddy van Baelsar instead. Thanks, dad? 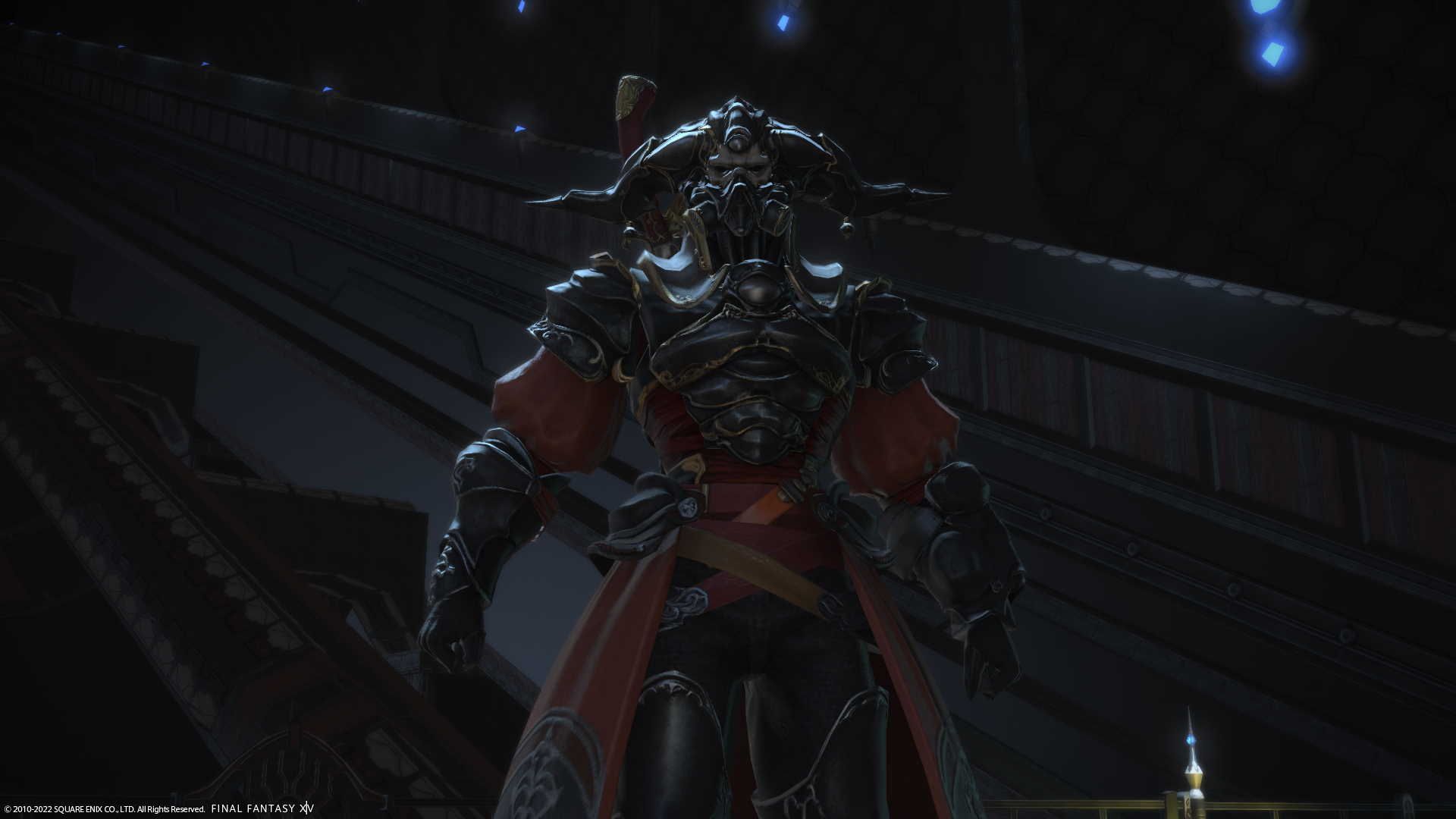 I am pleased to announce as well that Maggie is still an essential part of the experience. There’s no long-winded cutscene, far less is there a need to pick up a key before getting in. You simply hop into the Magitek and start blasting.

Still, there are the rest of the cutscenes until you defeat Gaius, so be prepared for that. Also, they weren’t kidding, the lighting is much better now!

After Gaius van Baelsar points his weapon at you, he immediately puts it away to climb into the Ultima Weapon. The weird dog-robot thing is your next trial, and the final one involving a party for this stretch of the game. You can take it on, of course, with either a multiplayer party or And yes, there is still that unskippable cutscene in the middle that splits the fight into two phases. Removing an iconic moment? Such devastation was never their intention. 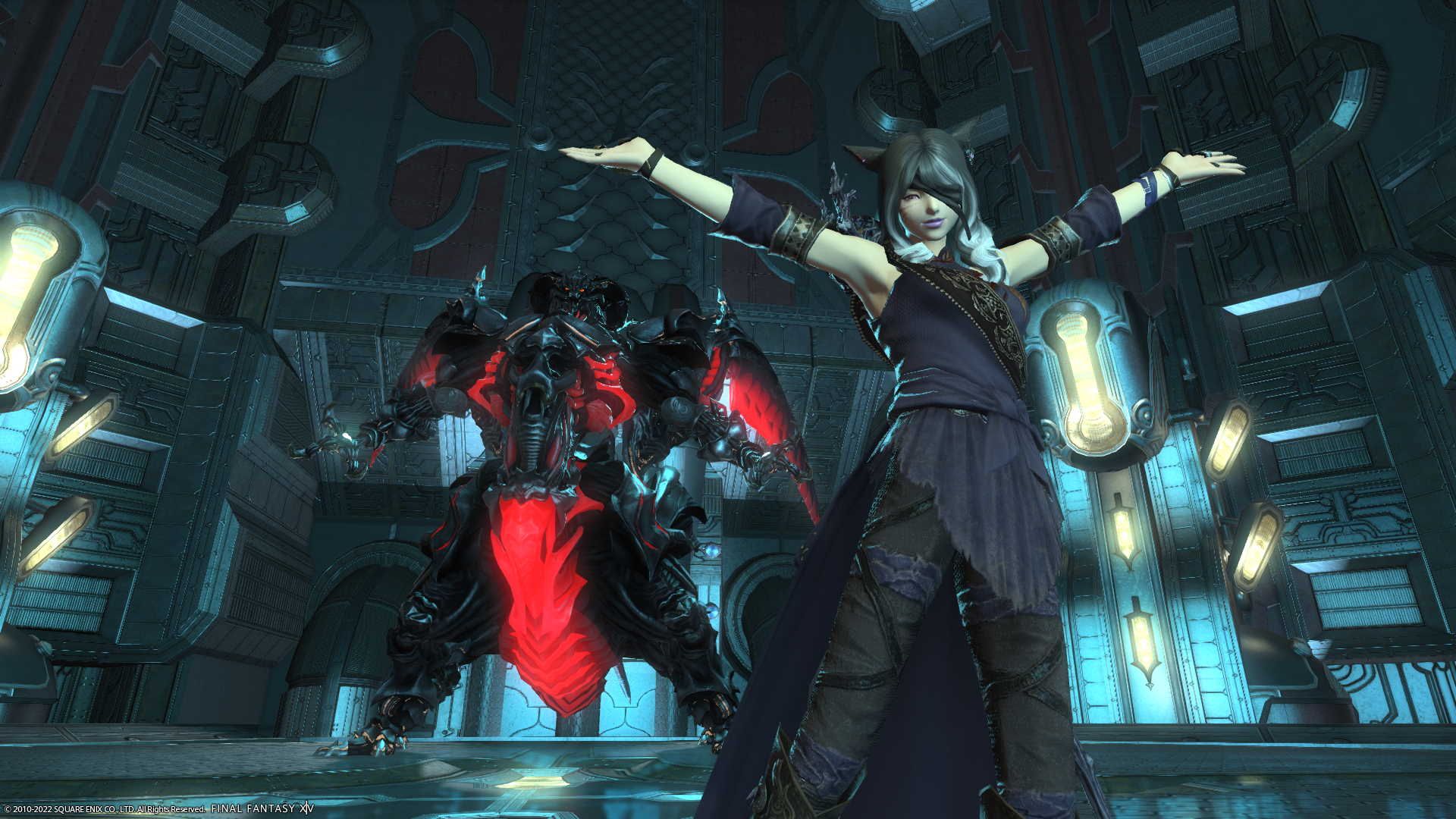 I’ll admit, even during its Praetorium days, I was vividly aware that there were mechanics, and that said mechanics tied into the story, the might of the Ultima Weapon and how it garnered the powers of the primals. The narrative implications finally feel heavy when these are gathered into an at-level trial! It’s actually great! It does drag on a little long given it’s, again, two phases. However, it’s far more interesting.

Formerly the final part of the Praetorium dungeon, now instead of taking him on with friends, you tackle the Ascian face-on in a solo instanced duty. As you take on Lahabrea, the mechanics are much more clearly defined. Obviously, there were mechanics before, but there’s consistency and visual pizzazz to them that makes the combat approachable and interesting.

It’s also a two-phase ordeal with major pauses for story that make the final battle truly feel like a finale. It’s not exactly difficult, but it feels like a proper challenge, narratively speaking, against the Warrior of Light. If nothing else, the New Game+ experience was worth a visit to play this new version of the fight for the first time.

And hey, look, my catgirl’s a Super Saiyan. Hell yeah. 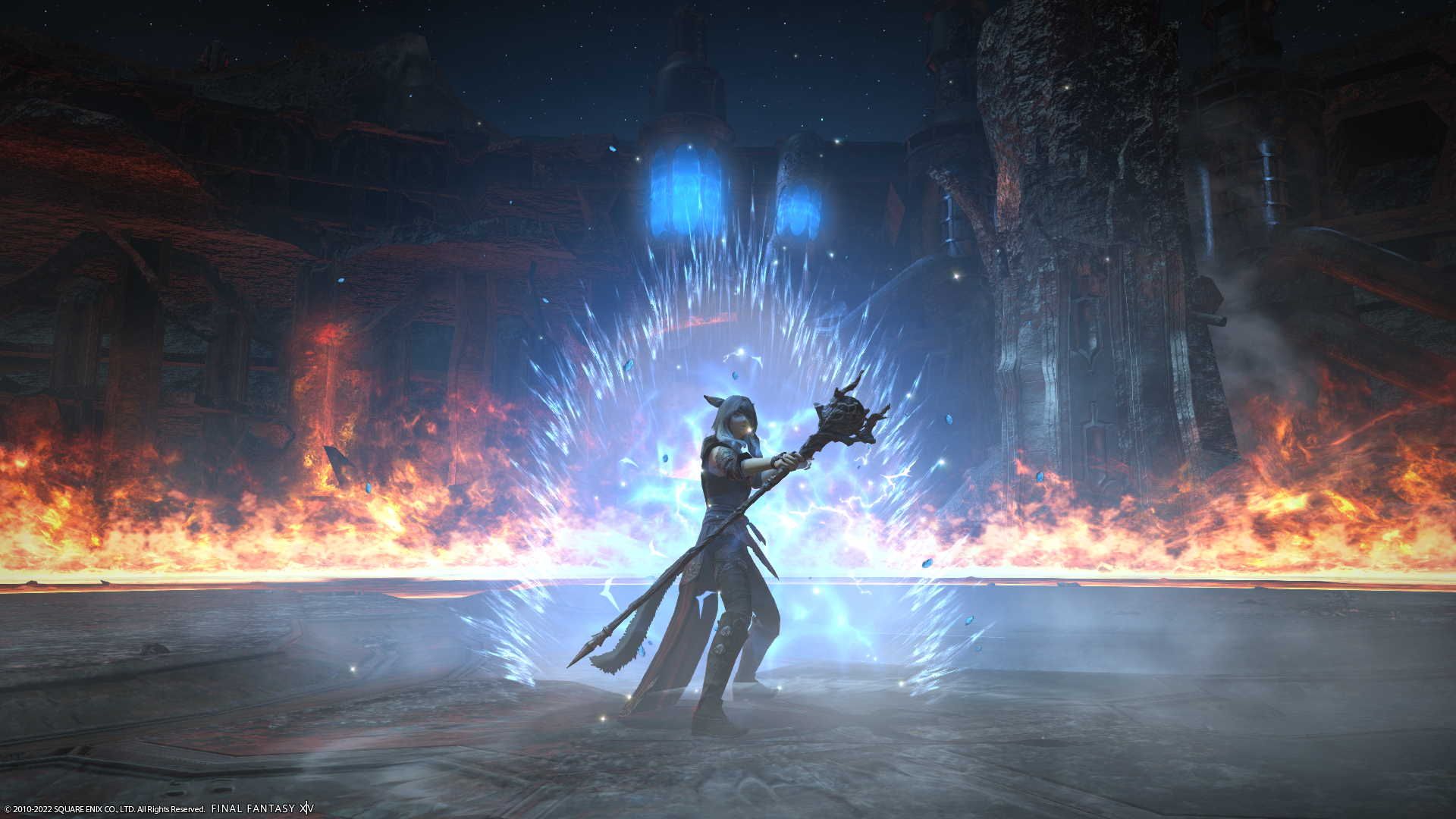 For many years, flawed gameplay systems have softened the narrative and gameplay impacts of the finale of A Realm Reborn. Now, however, the ending is a lot tighter and a lot more bearable to play through.

With the divisions of the former Praetorium fights, someone who may not have enjoyed the Netflix marathon of the former super-dungeon can enjoy each major component for what it is. The smart designs of each major boss battle are now in full force, and therefore, each fight feels more impactful to the story being told.

In addition, the tightening of the mechanics that used to be littered throughout the dungeons for flavor makes for a more approachable experience. Before, veterans would blast through these and leave newer players behind, allowing for a ton of confusion and frustration (and often, death). It’s nearly impossible for new players to miss any component of these new dungeons now.

Have you tried any of the new and newly-revamped duties yet? Would you recommend them to a new player?