I’m sure you’ve heard the old saying - You only have one chance to make a good first impression. That is no truer than with video games and open beta tests. Opening up an unfinished game to the general public is risky business, but it can pay off in a big way if the pros outweigh the cons. I’m sure that is something developer Cryptic Studios and publisher Perfect World Games were well aware of when their upcoming action role-playing game, Magic: Legends (M:L), entered open beta a few days ago.

As a lover of everything ARPG, I have been playing Magic: Legends since it became available, and I’ve already logged several hours of playtime. I still need to dig deeper into the gameplay and character progression before I have a final verdict but, just like a first date, I already have a good idea of how things are going to pan out. Until then, here are five likes and dislikes that have made my “will I play it at launch” checklist.

There are five classes available to the beginning player: Geomancer, Mind Mage, Sanctifier, Beast Caller, and Necromancer. Those choices cover the five basic land/mana types, and we know that there are more classes to come, like the Dimir Assassin.

I have created and played all of the beginner classes at least a little bit. The best part of the class selection is the variety of gameplay these five classes bring with them. The Geomancer has a melee-based focus and the Sanctifier goes with a more long-range approach. The Mind Mage fits right in between these two with a complement of medium-range spells. The Necromancer brings a horde of undead to do most of the fighting for her, while the Beast Master appears to use a mix of ranges along with a constant fighting companion.

If you can’t find a playstyle you like with the five starter classes, you aren’t trying very hard. And once you unlock the ability to have multi-colored decks, the options open up even further.

Choose a class, then play the hand you’re dealt.

Dislike: You can’t skip the tutorial

It also looks like the shorter cutscenes and dialog throughout the story can’t be dismissed with the simple swipe of a key. It’s a minor annoyance, but little things like this can add up over time, and that scares me a little bit.

Mouse and keyboard, controller, and even old school WASD movement have made their way into Magic: Legends. Other than your Mind Mage moving through telepathic control, pretty much every movement option found in an ARPG is here. This is a good sign that the developers are trying to accommodate Magic the Gathering players, as well as veteran RPGers.

There are some good aspects to the map implementation in Magic: Legends. Switching between the mini-map to a full-screen map overlay is a nice touch but I do wish the overlay maintained your previously adjusted zoom level each time it opened. The default view is zoomed way in and shows too little of the surrounding area, requiring you to adjust the zoom level manually each time you open it.

The world map needs even more work. The way it opens focused on the middle of the map and then moves to your character’s location after a short delay is clunky. And again, please save the current zoom level upon closing, so it opens to that view the next time.

Without some sort of card system at its core, Magic: Legends would be an MtG game in name only. Beyond your primary and secondary attacks and a utility ability, all of your spells come from your deck of cards. This obviously meets that core requirement. 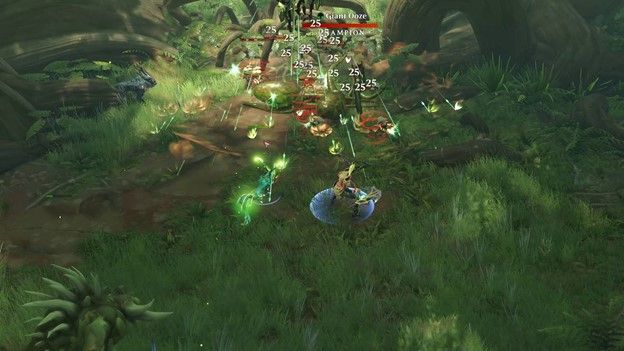 The Beast Hunter calls down a volley of arrows.

element of a Magic the Gathering match; it eliminates the spamming of a single attack. And the potential to have an encounter-changing card pop up at the perfect moment adds to the excitement of combat.

As mentioned above, it also gives you a great amount of flexibility in preparing your character for battle. Swapping out one or two attack cards for a couple of support spells could completely change your character’s chance against a boss or other difficult fight you are having trouble with without having to respec your character completely. This on-the-fly adaptation will keep things moving quickly.

I know I just said I liked the card system, and in theory, it is a fantastic way to differentiate M:L from the rest of the pack (pun intended). Building your character’s spells from your card collection does offer flexibility in creating a unique class in its current implementation. Where it starts to fall apart is when you finally take the deck you have created and put it to use in battle.

My first issue is card selection. The twelve-card limit per deck forces you to pick only the most powerful spells you have, reducing the impact. No way to add multiples of a single card into a deck. No way to discard a card to get to a specific card. hard to differentiate between cards during fights. Would like to see a tray and cards pop up in the same spot each time.

Fast travel is a very divisive mechanic in ARPGs. Personally, I am glad they have fast-travel locations in Magic: Legends. The maps are large enough to warrant teleport locations, though I do think there may be a couple more than are needed. A cooldown could also be added to limit usage. Another option would be only allowing quick travel when you are at a teleporter.

In any event, I much prefer the instant teleport option present in M:L, to the auto-run option present in many ARPGs. Some claim teleporting around a zone breaks the immersion, but auto-run is even worse. A quick teleport gets you close to the action and keeps me immersed; auto-run slows everything down.

The lack of loot in Magic: Legends is probably my biggest complaint from what I’ve played so far. My concern for the loot system goes much further than not seeing loot explosions on every creature’s death.

I am still very low level on all of the characters I have created, but I have a couple of hours of playtime on my highest level character, and she still doesn’t have a full complement of basic gear. For a little perspective, there are only six gear slots: head, chest, hands, feet, and two accessories.

I am only gaining two or three pieces of gear per mission. Given what appears to be a wide array of buffs, at this rate, it will be a very long time before I have a decent set of equipment. I can only imagine what it’s going to take to get a set of powerful gear to use later on. Give me more loot!

Frame rate issues some players are having aside, the visuals in Magic: Legends are great. Cryptic has done a fantastic job of capturing the look and feel of the MtG cards and translating it into a 3D world. They have hit that sweet spot between realistic and cartoonish perfectly, giving the world a hand-drawn look while maintaining a decent amount of detail. The character and creature skins are nicely done as well. Movement is also smooth and realistic.

Multiplayer in Magic: Legends is full of action.

The spell effects are where Magic: Legends shines. Seeing angels swoop down or a barrage of arrows fall from the sky is fantastic, and I don’t think I will ever get tired of watching my minions materialize from a cloud of purple smoke. Even when spells have the same effect, like my Necro’s Wailing Souls and the Beast Master’s Stampede, the visual difference is much more than many games where they simply change from fire to ice.

I am very liberal when it comes to cash shops. In fact, I don’t mind 99% of the things available in Magic: Legends’ cash shop. If players wish to buy skins and XP boos, I tip my hat to them and say thank you for paying so I can play for free. I plan on playing through the whole story and will be able to earn the other classes naturally, so if other players want to pay to get access to additional classes earlier, then again, that’s fine by me. Even the battle pass gets the A-ok from me.

My issue lies with the booster packs. These are pure, unadulterated loot boxes. Personal opinion aside (I don’t care if they exist or not, I just won’t buy them), loot boxes are toxic. Every step of the way, loot boxes push potential players from the game. 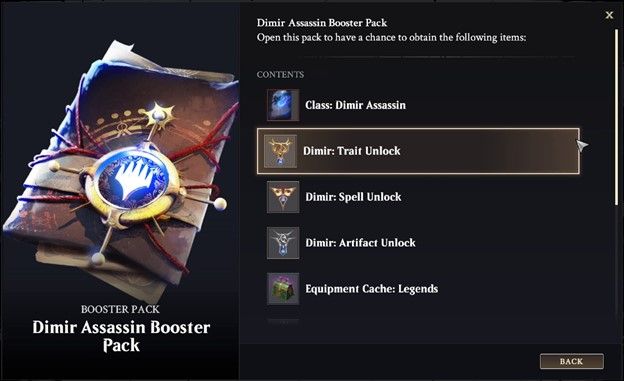 Let’s face it. Every game needs players; the larger the pool, the better. Loot boxes are an automatic no for some gamers, immediately eliminating them as potential players. Next to go are the players who blow a wad of cash and are unsuccessful at getting the unique item they are hunting for. Even worse are the players who don’t pull their coveted item and stick around. This group becomes toxic, spewing anger and vitriol everywhere they go, slowly but surely pushing happy players to the point they abandon an otherwise enjoyable experience.

Perfect World, please, there’s still time to remove the booster packs from Magic: Legends. Charge more for every single item if you need to in order to make your revenue targets. Charge double or triple price for the unique classes and items currently contained within the packs. There will still be players who will pay for them.