Here at MMORPG, we consider MMOs the pinnacle of social gaming, with players meeting up with their online friends multiple times a week to quest, kill mobs, and take on dungeon and raid bosses in the pursuit of gold and gear. MMOs can be a huge time sink, though, with static groups, raid schedules, and guild obligations that must be met regardless of what is going on in the real world.

What’s a person to do when your MMO commitments become too demanding, and you just want to take a break without altogether abandoning the social aspect of gaming? The answer is simple - grab a couple of friends and join up for some co-op multiplayer action. By taking the massive out of your multiplayer experience, you shed the commitment and obligations that keeping up with hundreds or thousands of other players brings. If one or two of your MMO raid group can’t make it, it’s a wasted day. If someone can’t make it to your regularly scheduled Wednesday night co-op session,  who cares? Play without them knowing they won’t fall behind if they aren’t there.

With so many casual (compared to MMOs) co-op games out there, which one should you and your friends check out? We’ve put together a list of the 10 best co-op games to play when you have MMO burnout. To make sure you aren’t too far out of your favorite genre, we’ve focused on games that include many of the same elements you’ll find in an MMO. This means everything from crafting, building, fighting, even a little roleplay. So don’t expect to find Overcooked or It Takes Two on this list (even though they are great games as well). And be sure to let us know which games we overlooked in the comments. 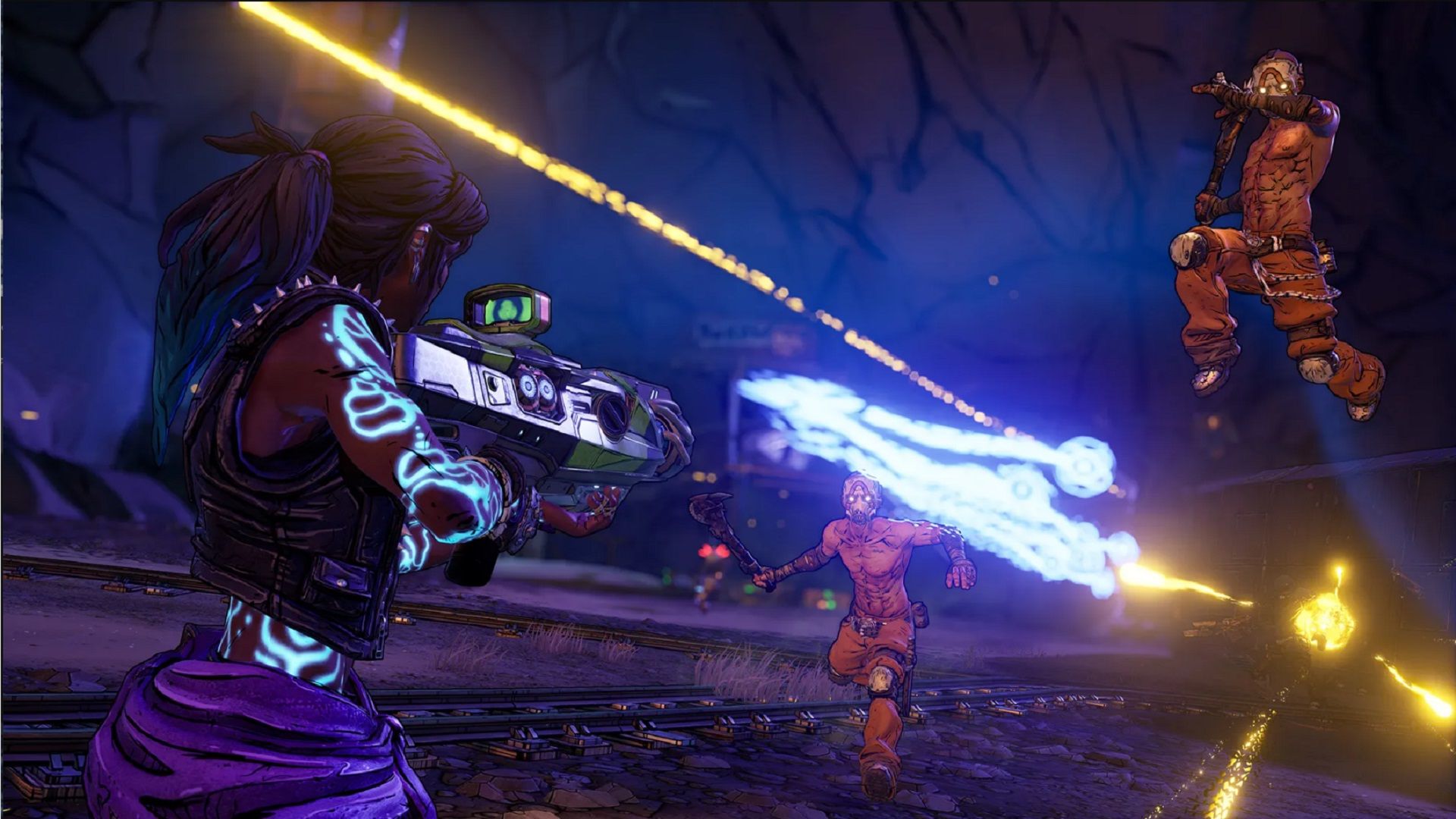 If crude humor and fart jokes are your style, then Borderlands 3 might be the perfect shooter for you and your friends. Don’t think for a second that you won’t find a full-fledged looter shooter here, though. No, Borderlands 3 offers a story full of colorful characters, fast action, and more loot than you’ll know what to do with. And with four vault-hunters to choose from, you and your friends are sure to have a rip-roaring good time as you fight across Pandora and beyond. And just in case you wanted a little D&D with your Borderlands, don’t forget to check out Tiny Tina’s Wonderland when it releases on March 25.

With the release of its latest expansion, Destiny 2 is back in the spotlight. Bungie has worked diligently to resolve all of the concerns players expressed at its original launch back in 2017, and critics almost unanimously agree that The Witch Queen expansion is the pinnacle of the franchise (check out our review here). There’s truly never been a better time to jump into the looter shooter. If you’re not quite ready to trust the reviewers and plop down $40 sight unseen, you can download the free-to-play version and experience what Destiny 2 has to offer for yourself. 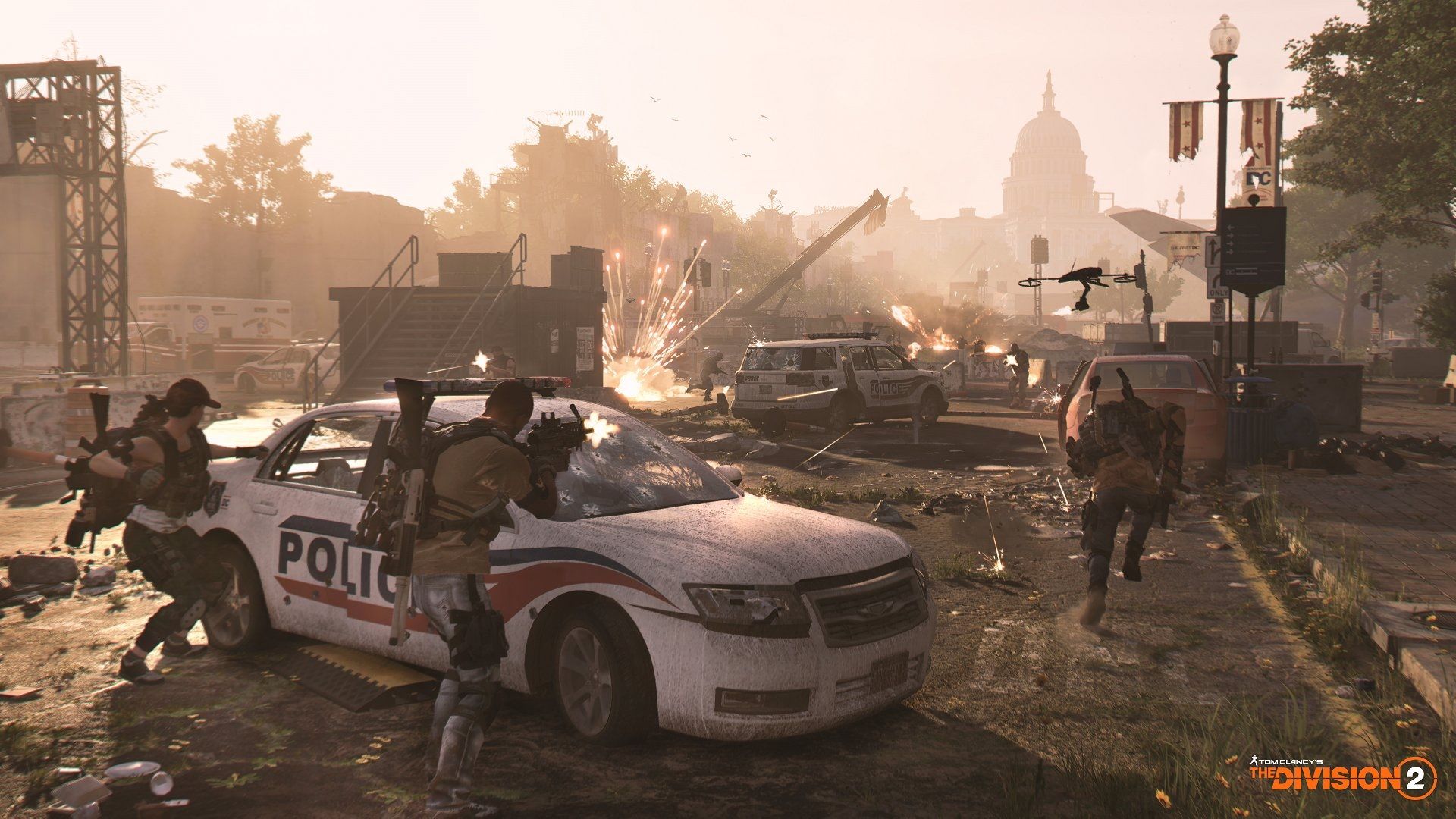 In a post-apocalyptic world, you want someone to have your back. And whether you are taking a pleasant afternoon stroll through DC or trying to bring down the Warlords of New York, the more firepower you can bring to the fight the better. Like most shooters, 4 player teams will be enough to take on most of what The Division 2 will throw at you, but a party of 8 will be required if you want to take on the hardest raids and earn the best gear for your character. 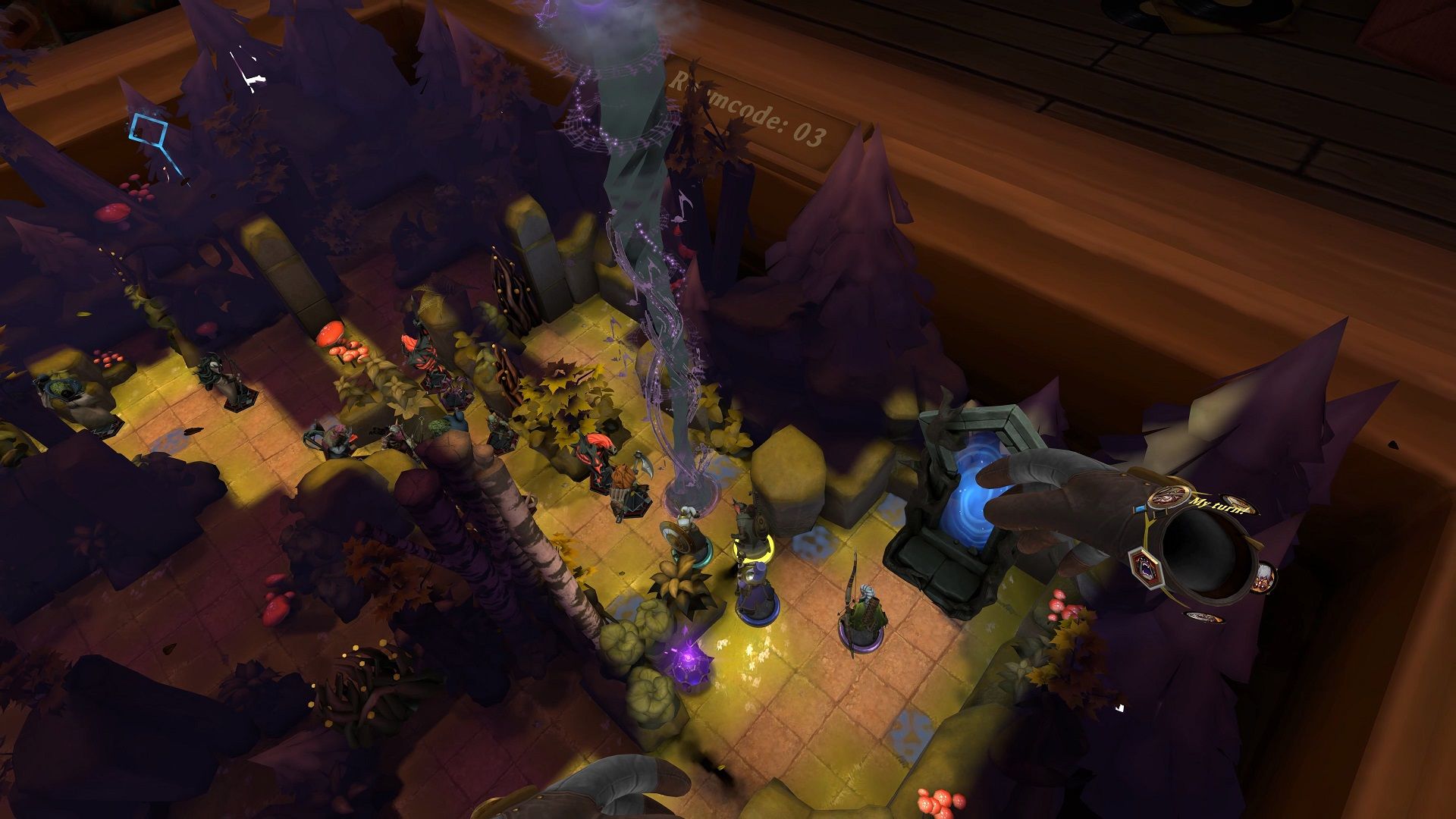 Not only does Demeo offer an excellent recreation of a tabletop RPG experience, but it also does so in VR. Demeo is not Dungeons & Dragons, though. With a simpler ruleset and lack of a large overworld campaign setting, Demeo offers dungeon crawling more akin to that found in board games like HeroQuest or the venerable arcade hit Gauntlet. With the ability to shrink your avatar down to miniature size and view the board and pieces up close and personal, Demeo offers a level of immersion that you can’t find in a regular tabletop setting. With cross-play, you can gather your friends for a static group or join a random group regardless of whether they play through PC VR or Quest, and your non-headset-owning friends will be able to play along when the non-VR PC version arrives on Steam on April 7th. 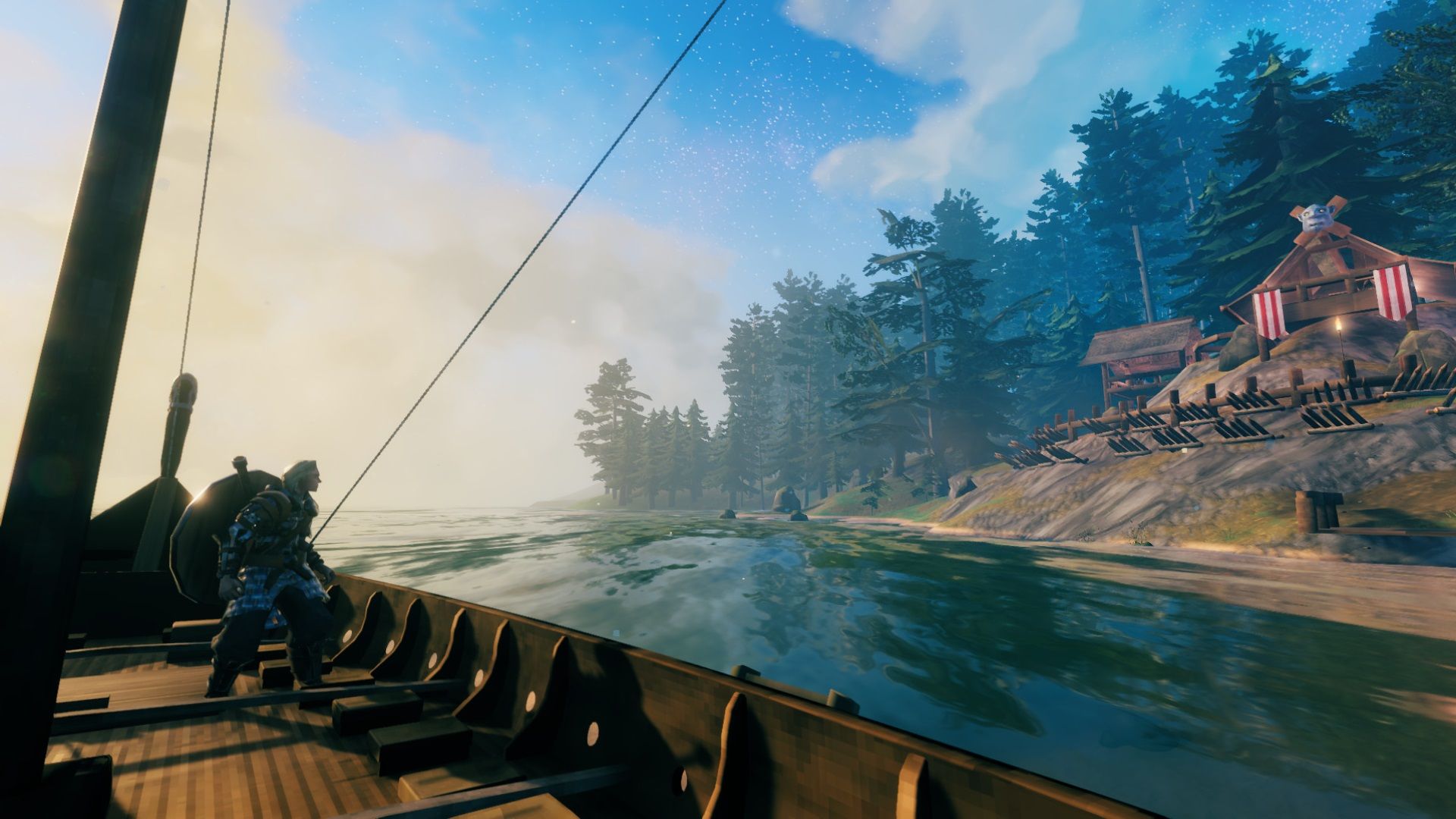 When the indie survival game Valheim launched on February 2, 2021, it took the world by storm. Although the popular Viking theme doesn’t hurt, Valheim’s increased accessibility through things like intuitive crafting and replacing the negative effects (including death) of not eating and drinking with positive buffs for doing so made it such a quick hit. It’s okay to play solo, but the fun really begins when you join up with a group of up to 10 players to gather, craft, build, and slay some of Odin’s greatest enemies as you strive to earn the favor of the Allfather.

I’ve played it. You’ve played it (don’t try to deny it). Everyone’s played it. With over 200 million sales across consoles, PC, and mobile devices, it’s hard to believe there’s a gamer out there that hasn’t played Minecraft at one point or another. But have you played it with a group of friends? If not, you should. I mean, when you went to the park and played in the sandbox, wasn’t it more fun when other kids were playing alongside you? The same thing goes for the ultimate sandbox game. 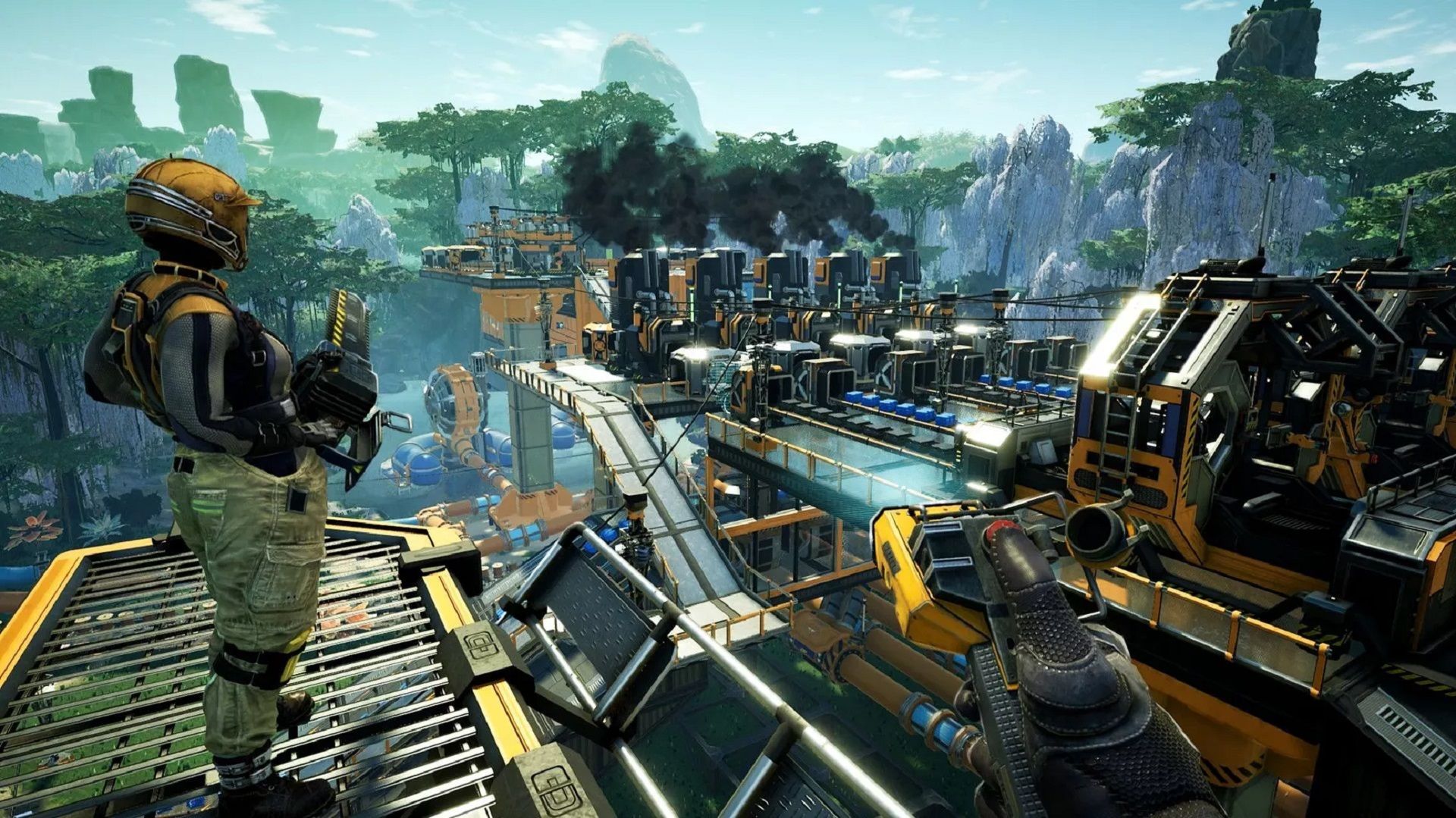 Satisfactory is quite the unicorn in the base building genre. You don’t have to defend against waves of enemies. You don’t have to rush production to prepare for a Zerg. In fact, other than a few creatures to farm for resources, the only thing that can kill you in Satisfactory is an accidental fall from the top of a building or cliff. Satisfactory isn’t about safety in numbers, so why is it better to play co-op than go solo? Because there’s so damn much to build you’ll go crazy trying to do it all by yourself. That, and you’ll want to have a Steve around to blame when your factory isn’t running at peak efficiency. It’s always Steve’s fault.

Due to the pleading and begging by fans of Don’t Starve, Klei Entertainment took their quirky take on the survival genre and added multiplayer support so you could bring along five of your closest friends as you try not to, well, starve. And if you don’t have five friends, you can always take your game public and recruit some new BFFs as you explore a world strange enough to make you fear the dark.

Turtle Rock Studio, the creators of the Left 4 Dead franchise, are back with more first-person shooter mayhem in Back 4 Blood. You and three of your friends are Cleaners, the few remaining humans that are immune to the parasite that has turned the rest of humanity into the Ridden. Each of the eight available cleaners comes with its own customizable traits that will help your team fight through multiple missions, each one harder than the last.

At first glance, Terraria might look like a 2D version of Minecraft. There’s lots of crafting, base building, and digging going on, and digging straight down can quickly lead to an untimely death. Don’t let the primitive 2D graphics trick you, though; Terraria packs in way more than initially meets the eye. There are NPCs to rescue who will move to your base. Terraria also packs in a ton of weapons and some of them are fantastical as they are strange. And you’ll need those weapons to defeat all of the encounters and bosses you come across. So grab a few friends and get to digging!

You probably noticed the lack of classic ARPGs on this list, and there’s a good reason for that. Generally speaking, co-op in games like Diablo, Path of Exile, and any other ARPG  is an afterthought that does little to enhance gameplay. Out of the genre, I am adding Minecraft Dungeons as a bonus game for one simple reason: it is a great gateway game to introduce the rest of your family to “real” gaming. Virtually everyone has played Minecraft, so MC Dungeons provides a familiarity that can coax family members and friends into other genres, and once they get a taste of what games other than Minecraft has to offer you can introduce them to your favorite co-op game with an actual chance of them sticking around.