Grounded, the miniaturized, early access action-survival title from Obsidian, has made a lot of progress since its initial release on Microsoft’s Game Pass and Steam back in July. With over 1 million players and growing, Obsidian isn’t content with resting on Grounded’s initial success, and has since updated the game with birds, mutations, ziplines, and now players will finally get to dive into the depths of the Koi Pond.

I’ve been covering grounded since its initial announcement way back in November of 2019. My initial impressions instilled a little excitement and a heaping dose of wonderment as I thought about how unique this survival experience could turn out to be. When the game’s demo version finally went live, it was an enjoyable diversion, but it was clear the game was still in development. Flash forward to August, and sure enough, not only had the game become more accessible in terms of building, but a big (pun intended) update hit that brought in mutations for characters, and the monstrous bird, as if scraggly spine-chilling spiders weren’t enough to humble our tiny heroes.

Obsidian recently showcased their Koi Pond update for us, and it expands on that presence of scale premise the bird introduced, by adding in a scaly, grizzled, one-eyed koi fish as large as a whale, and as hungry as a shark to impede your underwater progress. For those not well versed in the game, the Koi Pond is a locale that is somewhat of a focal point in the backyard. It’s nearly as enticing to visit as the grand oak tree, but until this upcoming update, it was merely a mildly serene backdrop to the bug and arachnid infested grasslands surrounding it. 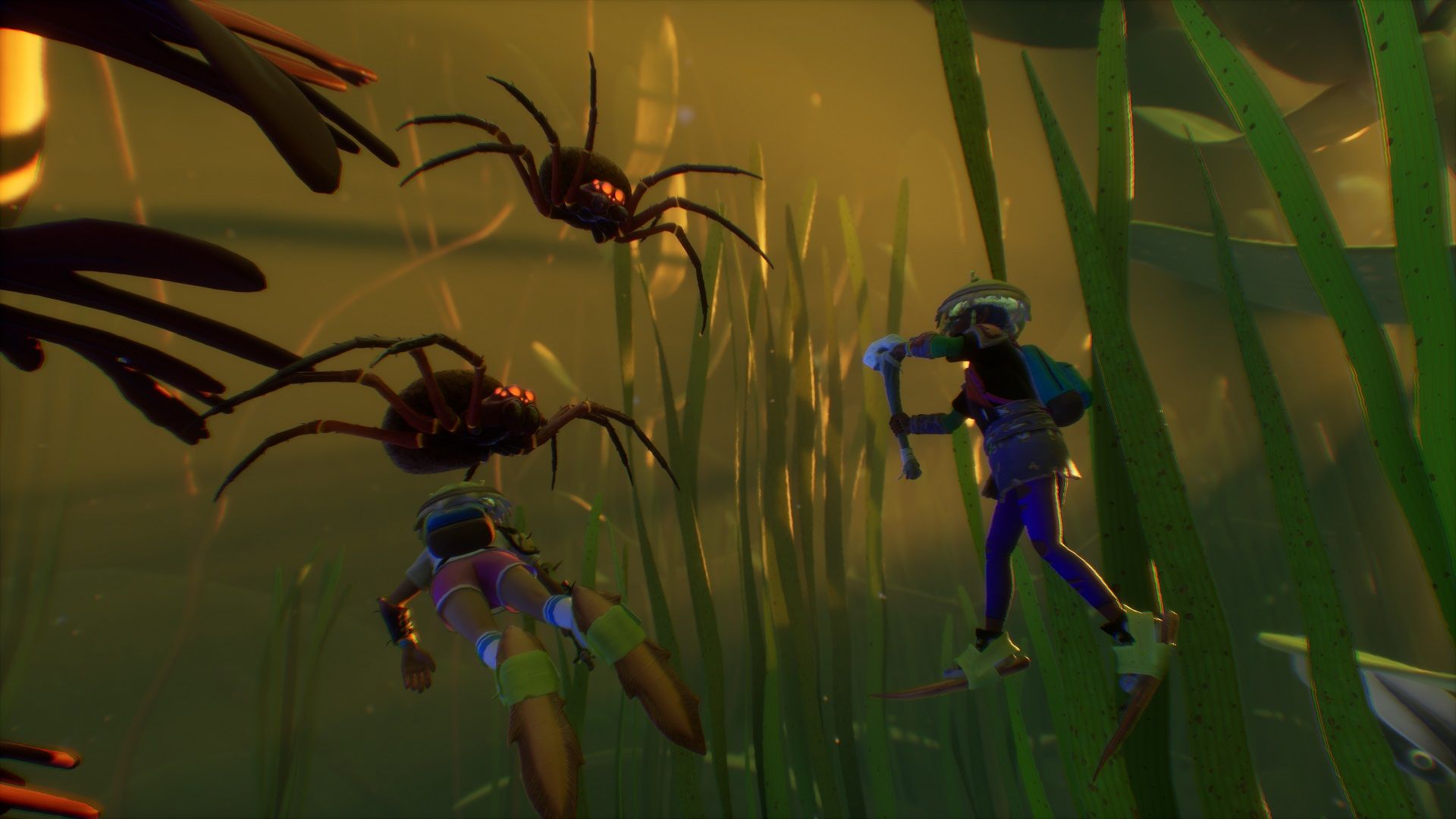 All that is set to change in the Koi Pond update, where players will be able to dive into the relative depths of the pond, as they find new creatures, procure new materials, and eventually craft new items that will expand the game in exciting ways. Adam Brennecke, the game director of Grounded also spoke about the ability to build bases on the water itself:

“One thing that we really wanted to do was to add the floating foundation. This is a way to build your base on top of the surface of the water, and it allows you a lot more customizable options for building a really cool base on the surface of the pond.

We also have buoy; the buoy is a really good way for marking your location and it lights up an area in the dark depths. It allows you to figure out where you’ve been and where to go.”

He did also mention that building a base underwater would not be part of this update, but it’s certainly something they would look into. Most players will undoubtedly find the watery underworld of Grounded appealing, with many nooks and crannies they’ll need to explore, an underwater dinosaur to find, and the third lab which, of course, is also underwater and will continue the storyline, unlocking the next set of secrets as to how you’ve become so small, and what you may need to do to grow in size again. 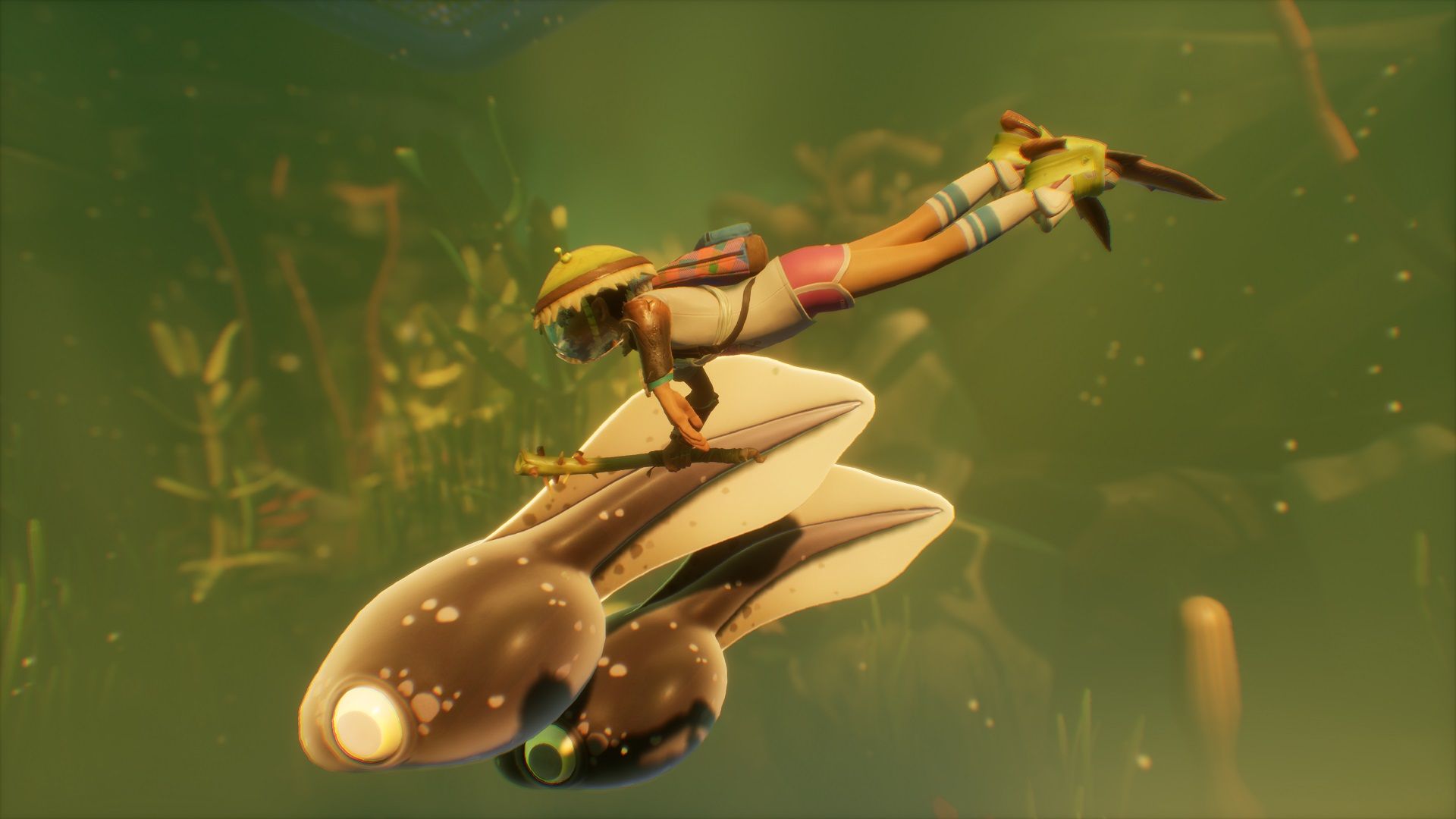 New creatures will also roam about the pond, like water fleas, tadpoles and water boatmen, but if you think the pond will be spider-free, think again, as diving bell spiders will be there, spinning air-pocket webs that help you, but won’t shy away from attacking you like his land-dwelling spider brethren. The update is a grand and welcome addition to a game with such tiny protagonists. How exactly these features factor in to the larger Groundedverse later on, as the story progresses, has yet to be seen, or even spoken about at this time. Generally speaking, most players shy away from underwater content due to generally poor combat, slow movement, and disappointing encounters. Brennecke did say that the team is aware of the stigma of water combat, and they hope to change people’s perceptions of it, though that is one weighty, thousand-pound koi fish, of a goal.

Before signing off, it was important that Brennecke let us know that of some upcoming features they plan to add in the game, some of which have been long sought after. Flying creatures, apart from the bird, will be joining later on down the line. New base building options will become available in what they are depicting as “base building tier II”. However, the most important feature, and one I’ve personally asked for, even way back when the game was announced, pets, will be available at some point in the near future. These three features are sure to have me swinging back through and checking up on these minuscule misfits to see what kind of creatures I can tame. 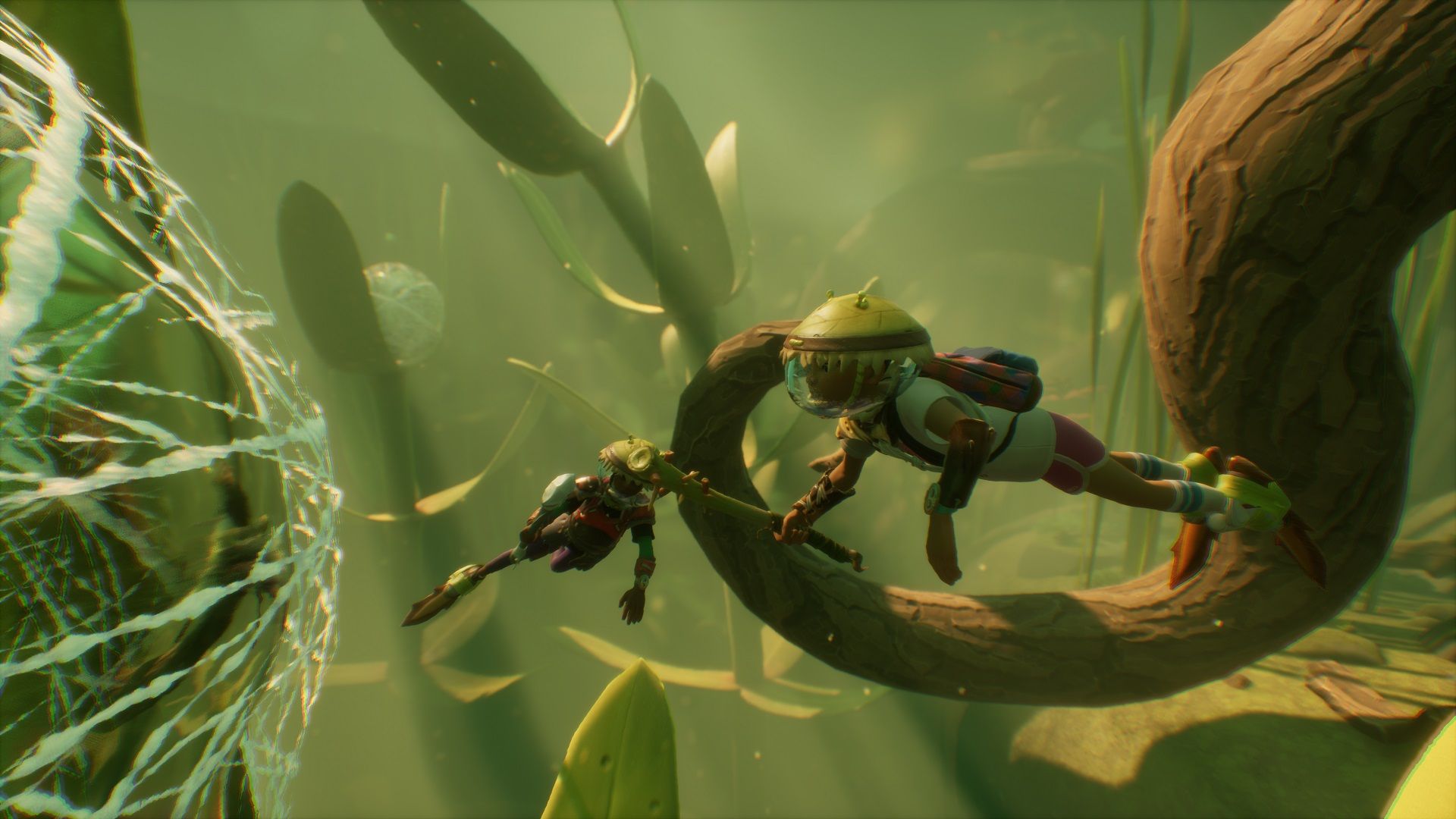 We will also be able to look forward to some new areas, and the build to the complete first act of the story. There is no doubt that we can expect a long and arduous journey in Grounded, but most of the larger story arc information has been left to open to imagination. Existing labs will be overhauled with more story content, and exciting new areas will be added. This backyard is slowly turning into a wide world of possibilities, I can only hope that the developers keep the accessibility and game flow light enough so that it can be enjoyed by both casual and hardcore players. As Grounded is completely next-gen ready, and optimized for Xbox Series X and Series S, with the next-gen version planned for release November 10th, there is a lot coming down the pipe. Each update reignites the desire to hop back into this gigantic, tiny adventure again.